ABSTRACT: Diltiazem hydrochloride is a calcium channel blocker used in various cardiac diseases. It is associated with problem of short biological half life leading to high dosage frequency. Therefore, to ensure the controlled drug delivery systems of diltiazem the alginate-chitosan microspheres were prepared by Ionotropic gelation technique and characterized.  The diltiazem hydrochloride SR microspheres were successfully formulated by Ionotropic gelation technique employing different proportions of sodium alginate, hydroxy propyl methyl cellulose (HPMC) K15M and carbopol 934 in various combinations. The prepared diltiazem hydrochloride microspheres were characterized for entrapment efficiency, swelling index, Carr’s index, angle of repose, particle size, assay and in-vitro drug release. Further, the final optimized formulations were assessed for their compatibility studies using Fourier Transform Infrared (FT-IR) Spectroscopy and stability was assessed by conducting accelerated stability studies. All the diltiazem hydrochloride microsphere formulations were found have good flow properties. The mean particle size was found to be within a range of 6.1-to 9.2 μm and entrapment efficiency ranged from 70% to 94.6%. In-vitro drug release was found to be 96% for the optimized formulation. FTIR studies were carried out and all the excipients are found to be compatible with no interactions. Stability studies were carried out for the best formulation F5 indicates that there is no change in entrapment efficiency and release kinetics. The results obtained in this work clearly indicate best results using carbopol 934 a rate controlling polymer in diltiazem hydrochloride SR microspheres.

INTRODUCTION: Microspheres are defined as “Monolithic sphere or therapeutic agent distributed throughout the matrix either as a molecular dispersion of particles” (or) can be defined as structure made up of continuous phase of one or more miscible polymers in which drug particles are dispersed at the molecular or macroscopic level. It has a particle size of (1-1000nm).

These are the most frequently employed techniques used to overcome the stability problems of these components. It has been applied by the food and cosmetics industries to control the delivery of molecules and to protect them from oxidation. Sodium alginate is an anionic polymer, which can be easily cross-linked with calcium chloride. This is because that the calcium ions are bound to carboxylate residues of both mannuronic acid and glucournic acid, which are components of sodium alginate. Here it is the interaction of calcium ions with glucournic acid that contributes to the complexation mechanism. This complexation between calcium ions and sodium alginate leads to controlled release of drugs. 1, 2

Elimination half-life of the diltiazem hydrochloride is 3- 5 hours. Further, currently available slow release oral dosage forms, such as an enteric coated or double-layer tablets, which release the drug for about 12 to 24 hours, still result in inefficient systemic delivery of the drug and may lead to potential gastrointestinal irritation.

Microencapsulation for oral use has been employed to sustain the drug release and to minimize or eradicate gastrointestinal tract irritation. Incase of chronic dosing of matrix tablets unwanted intestinal retention of the polymeric material may occur which can also be avoided by microspheres. Microencapsulation is used to modify and retard drug release 3, 4, 5. Due to its small particle size, are widely distributed throughout the gastrointestinal tract, which improves drug absorption and reduces risks of side effects mostly gastro intestinal mucosa due to localized build-up of irritating drugs.

Hence, the main objective of the present investigation is to encapsulate the diltiazem hydrochloride into sodium alginate microsphere.

Materials: Diltiazem hydrochloride was a gift sample from Hetero pharma, Hyderabad. Sodium alginate, HPMC K15M, carbopol 934, calcium chloride are from LOBA CHEME and all the other ingredients used in the study were analytical grade.

Formulation of diltiazem hydrochloride SR microspheres: Alginate particulate system for diltiazem hydrochloride SR microspheres was prepared using sodium alginate and different combinations of HPMC K15M, carbopol 934. In order to get the complete solution stirring is continued and after that it was added drop by drop into a solution containing calcium chloride. Microspheres, which were formed, were kept in original solution for 24hr for internal jellification followed by filtration for separation. The complete release was observed at pH 6.4-7.4 but the drug release was not observed in acidic formed during this phase. Composition of various formulations was mentioned as in Table 1.

Drug loading & encapsulation efficiency: Drug loading is important with regard to release characteristics. In general, increased drug loading will lead to an accelerated drug release. Drug entrapment efficiency represents the initial amount of drug proportion that has been incorporated into the micro particles. 100 mg of diltiazem hydrochloride micro particles were weighed and transferred to 100 ml volumetric flask containing pH 7.4 phosphate buffers. From this, 1 ml of sample solution was transferred to 10 ml volumetric flask and diluted up to the mark. From the above stock solution 1 ml of this solution is made upto 10 ml and the absorbance was measured at 236 nm. The drug content was calculated by using the formula.

Percentage encapsulation efficiency is carried out by calculating the amount of drug present in 100 mg of micro particles. The in vitro release of drug from the micro particles was carried out using USP I basket type dissolution tester containing 900 ml of pH 1.2 buffers for the first 2 hrs followed by 7.4 phosphate buffer for the next 22 hrs. The volume of the dissolution media was maintained at 900 ml with constant stirring at 100rpm and temperature of bath was maintained at 37 ± 0.5°C.

Aliquots (10 ml) of dissolution media were sampled at time points specified and replaced with fresh media immediately after sampling. Samples were analyzed for the drug content by using UV visible spectroscopy. The drug release data obtained. Dissolution studies were carried out for all the batches of the prepared formulations (05 batches).

Swelling index: This technique was used for characterization of microspheres. The microspheres (100mg) were placed in a petri dish with distilled water and swelling was allowed at room temperature and changes in weight variation between the initial weight of microspheres and weight due to swelling was measured by taking weight periodically. Swelling ratio was found by using the formula,

Where, Wo = Initial weight of the dry microspheres,

Flow property: Angle of repose method was employed to assess the flow ability. Microspheres were allowed to fall freely through the funnel, which was fixed at 1cm above the horizontal flat surface until the apex of pile just touches the tip of the funnel. The angle of repose (ø) was determined by formula.

Where, h= height of pile formed by microspheres,

r= radius of circular base formed by the microspheres on the ground.

Particle size analysis: The particle size of the prepared microspheres was measured by using a digimatic micrometer MDC-255 Mitutoyo, Tokyo, Japan; with an accuracy of 0.001mm. The average diameter of the 100 particles per batch was calculated.

Fourier Transform Infrared Spectroscopic (FTIR) studies: FTIR analysis was carried out for pure drug and for micro particles with and without drug using potassium bromide pellet method on FTIR spectrophotometer. Drug was mixed with potassium bromide and spectra were taken. FT-IR spectrum of pure drug diltiazem hydrochloride was compared with FT-IR spectra of different diltiazem hydrochloride formulations. Disappearance of peaks or shifting of peaks was studied using the apparatus FTIR 8400-S, Shimadzu, Japan

Dissolution test: Dissolution of microspheres can be performed using LABINDIA Disso-2000 apparatus described in any of the pharmacopoeias. The dissolution medium will essentially be selected as per the sink conditions and highest dose of the API.

RESULTS AND DISCUSSION: Diltiazem hydrochloride SR microspheres prepared by Ionotropic gelation technique was found to be spherical and free flowing in nature. Various physicochemical properties are depicted in Table 2.

Entrapment efficiency: Entrapment of drug within the polymer matrix was evaluated and was found to be raging from about 72.63 % to 94.6% as mentioned in Table 2.

The drug entrapped in microsphere correlates with the concentration of diltiazem hydrochloride present in the microsphere. The study performed with 100 mg of microsphere and evaluated data is represented in Table 2. From the data below it is viewed that, the practical drug content varied from 72.63% to 94.6 %. Table 2 shows the percentage of encapsulation was greater in formulation F5 when compared with other. The reason for increased entrapment is predicted as sodium alginate and calcium chloride have mediated a good cross-linking reaction by holding the drug within it. The greater the rigidity of microspheres enabled the greater entrapment efficiency.9

Swelling index: Swelling studies were carried out, to know the behavior of sodium alginate micro particles during gastro-intestinal passage.

Angle of repose: All the formulations have good flow properties ranging from 30°-38°. Optimised formulation F5 have excellent flow property having a value of 30°.

Particle size: The maximum of above 9.2 μm sizes of microspheres were detected in analysis of microencapsulated diltiazem hydrochloride that ranges from 6.1 to 9.2 μm as tabulated in Table 2. Microencapsulation prepared by this method showed more heterogeneous size, rounded shape with the smooth surface with no obvious dents.11

Assay: Content uniformity of API is determined. The assay value of all the formulations are found to be within the limits ranging from 87% to 102% for different formulations as tabulated in Table 2. 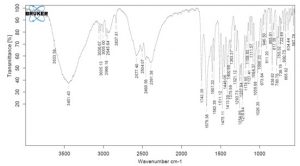 FIG. 1A: THE GRAPH SHOWING FTIR OF DILTIAZEM HYDROCHLORIDE 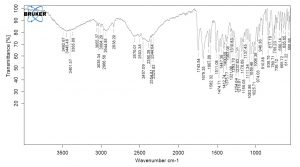 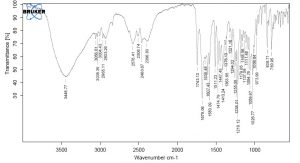 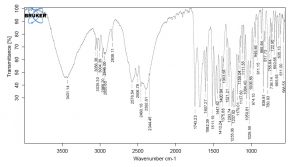 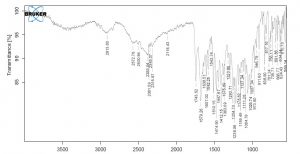 The IR spectra (Fig. 1a-1e) of combinations of various polymers with diltiazem hydrochloride shows that there is no change in the characteristic peaks, indicating that there was no interaction between the drug and polymers used in this study.

Stock I: Accurately weigh amount 100 mg of diltiazem hydrochloride into a 100ml volumetric flask and was dissolved in 20 ml methanol the volume was made up with buffer solution.

Stock II: From this stock solution 10 ml is withdrawn in to volumetric flask, made the volume up to 100 ml with the buffer solution concentration of the solution is to be 100μg/ml.

Stock III: From this second stock solution (100 μ/ml), concentrations of 5, 10, 15, 20, 10, 12 μg/ml. Solutions were prepared and corresponding absorbance was measured at 236 nm in an UV visible spectrophotometer. 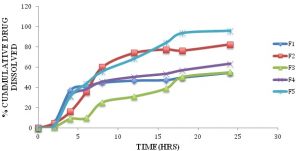 Stability study: After 3 months, storage of F5 formulation at 4±1 °C/ambient, 25±2 °C/60±5 % Relative Humidity (RH), 40±2°C/75±5 % RH, percentage entrapment efficiency and drug release were checked and found to be almost similar to the initial values. There was no characteristic change in any value and also the physical appearance. So it can be said diltiazem hydrochloride SR microspheres prepared with combination of carbopol 934 and sodium alginate is stable.

CONCLUSION: The initial batches F1 & F2 formulated using different ratios of sodium alginate F1 (2%) and F2 (1%). Formulation F1 & F2 released 54.37% & 86.56% of drug only for 24 hours in 7.4 pH. In Formulation F3 54.94% of drug got release in 24hours using a polymer HPMC k15M (1%) and sodium alginate (3%). Formulations F4 and F5 were formulated using carbopol 934 (1%) but varying concentrations of sodium alginate F4 (3%) and F5 (2%). F5 is the optimized formulation and the maximum drug release of 96% was released within 24 hours, which achieved highest among all the batches prepared. This study gives a clear statement of best sustained release formulation of diltiazem hydrochloride in the form of microspheres which may be used in the treatment of congestive heart failure, angina and arrhythmia, exhibiting better patient compliance.

ACKNOWLEDGEMENT: Author would like to thank Shri Vishnu College of Pharmacy, Bhimavaram for providing necessary support and facility.