INTRODUCTION: In conventional drug delivery systems, medication has many problems as it requires multi-dose therapy and the absorption of the drug across a biological membrane, whereas the targeted release system releases the drug in a dosage form. In traditional intravascular injection or oral ingestion, the medication is distributed throughout the body through the systemic blood circulation for most therapeutic agents and only a small portion of the medication reaches the organ to be affected. The newer approach, however, delivers the drug into the systemic circulation at a pre-determined rate, known as controlled release drug delivery system 1, 3.

In today’s time, the main focus of pharmaceutical industry is to develop formulations which have controlled or sustained release drug delivery system. In this system the active ingredients resides in a carrier system, which allows changing the time duration of the drug and its therapeutic index 4. The micro-sponges technology was first developed by Won in 1987 and the original patent was assigned to advance polymer systems, Inc 5, 6.

Micro-sponge drug delivery systems (MDS) are spherical, porous, polymeric and patented delivery systems that are used for prolonged topical administration. They are spongy tiny like spherical articles of 5 – 300 μm Fig. 1. 7 The surface and pore volume can be varied from 20 to 500 m2/g and 0.1 to 0.3 cm-3/g, respectively. Due to their non-collapsible structure made of interconnecting voids, they are inert and stand in a high degree of shear and hence can be used in the manufacturing of powders, lotions, and creams 8, 9. Micro sponges are designed to deliver a pharmaceutically active ingredient efficiently at a minimum dose and enhance stability, reduce side effects and modify drug release profiles 10, 11. Release of the drug into the skin is facilitated by various factors like pressurizing or rubbing, changes in skin temperature, pH and solubility 9. The benefits and limitations of microsponges drug delivery system are mentioned in Table 1. 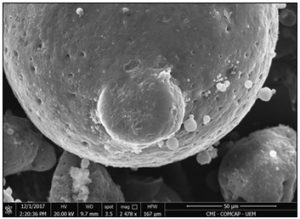 Approaches for Formulation of Micro-sponges: Liquid-Liquid Suspension Polymerization (Bottom-up approach) this method of micro-sponges formation is a polymerization method that starts by mixing immiscible polymer (monomer) with the active ingredient in a suitable solvent forming a solution phase. This phase is then dispersed in an aqueous phase containing additives such as surfactants and suspending agents to form suspension. Once the suspension is formed, polymerization is increased by activating the monomers; it can be done by either increasing the temperature or by adding a catalyst 17. The polymerization process leads to forming a solid spherical structure that has an open-pore surface in reservoir type of system. The solvent is removed, and solid material is then washed and processed to get microsponges. 18Thereaction vessel for micro sponge preparation by liquid-liquid suspension polymerization is shown in Fig. 2.

The Various Steps Involved In the Preparation of Microspongesare 17, 21: 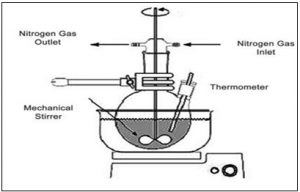 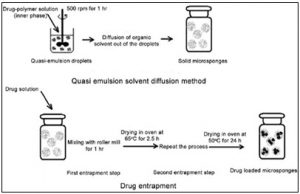 Pressure: MDS releases the active ingredient when it is pressurized or rubbed into the skin surface. The released amount of active ingredient depends on the features of microsponges. We can get optimized microsponges for a particular application by varying in different process variables and types of material 27, 29.

pH: By applying a pH-specific coating on the microsponges, we can trigger the release of active ingredients at a particular pH 27.

Determination of Loading Efficiency and Production Yield: The loading efficiency percentage of microsponges can be calculated by using the following equation 35:

Compatibility Studies: Compatibility study of drugs with excipients can be studied by Fourier Transform Infra-red spectroscopy (FT-IR). Differential scanning colorimetry (DSC) and powder X-ray diffraction (XRD) are used to study the effect of polymerization on the crystallinity of the drug. For DSC, approximately weigh and seal 5 mg of sample in an aluminum pan and then run it at a heating rate of 15 °C/min over a temperature range 25-430 °C in nitrogen atmosphere 36.

Determination of True Density: The true density of micro-spherical particles can be determined using an ultra-pycnometer under helium gas and is calculated from a mean of repeated determinations 37.

Resiliency Viscoelastic Properties: Micro sponges can be made softer or rigid according to the needs of formulation by modifying its Resiliency viscoelastic properties. Increased cross-linking leads to a slow drug release rate.

Hence resiliency of Micro sponges is studied and optimized as per the need by considering release as a function of cross-linking with time 38.

In-vitro Release Studies: USP XXIII dissolution apparatus equipped with a modified basket consisted of 5 µm stainless steel mesh is used to perform the In-vitro release studies of mico sponges. The apparatus is run at 150 rpm at37 °C to measure dissolution rate. The selection of dissolution medium depends upon the solubility of active ingredients to maintain sink conditions. The samples are withdrawn at regular time intervals and analyzed by suitable analytical methods (UV spectrophotometer 39.

Polymer / Monomer Composition: The selection of monomer is done depending on the characteristics of the drug which reside inside it and the vehicle in which the drug gets dispersed. The partition coefficient between the vehicle and the microsponge system and the release rate of the drug depends on polymer composition. The drug release also depends on several factors such as particle size, drug loading, and polymer composition. The release of drugs from micro-sponge systems of different polymer compositions can be studied by plotting cumulative percentage drug release against time. To check the compatibility of drug with the polymer, different drug-polymer combinations are made, and their drug release profile is studied 40, 41.

Stability Studies: Stability studies are performed to ensure that there is no change in the physical, chemical, microbiological, therapeutic, and toxicological properties of formulation during its storage in a particular container or closure system. The prepared formulation os tested for stability on storing them at 4 ± 1 ºC, 25 ± 2 ºC and 37 ± 5 ºC & RH (Relative Humidity) 75%. After one month and three months, they are evaluated for the following parameters-appearance, pH, drug content analysis, drug release profiles, rheological properties, etc. 42, 43

Applications of Microsponges Drug Delivery System: MDS are used to modify drug release; they deliver the drug efficiently in low dose with enhanced stability and low side effects. This system is used to prepare oral, topical and bio-pharmaceutical formulations. It also offers the formulator a range of alternatives to develop drug and cosmetic products.  This is due to the high loading capacity and sustained release ability of micro sponges 44, 45. The applications of different active ingredients in a microsponge formulation is given in Table 2. Its marketed formulations are mentioned in Table 3; examples of microsponge drug delivery with their formulations are given in Table 4 and Patents filed in Table 5.

For Topical Administration: Release of the drug into the skin is facilitated by a various factor like pressuring or rubbing, change in skin temperature, pH and solubility9. Genetically engineered melanin is incorporated in microsponges (sunscreens), melanosponge-α to spread it evenly hence providing protection against UV-A and UV-B radiation 46 Fluocinolone Acetonide (FA) is a corticosteroid primarily used in dermatology to reduce skin inflammation and relieve itching 16.

For Oral Administration: In the oral drug delivery system, MDS is used to increase the solubility of poorly water-soluble drugs by entrapping such drugs in its pores. Due to tiny pores of microsponges the drug is reduced to microscopic particles, hence increased surface area, thus greatly increasing the solubility. The drug in the microsponges resides in a protected environment, which provides controlled delivery of the drug to the lower gastrointestinal (GI) tract, where it is released upon exposure to specific enzymes in the colon. Additionally, the MDS system increases the GI retention time of the drug, thus increasing absorption 47, 48, 49, 50.

Microsponge for Bone and Tissue Engineering: The microsponges for the bone substituted compound are prepared in pre-polymerized powders of polymethyl-methacrylate and liquid methylmethacrylate monomer with two aqueous dispersions of a-tri calcium phosphate (a-TCP) grains and calcium-deficient hydroxylapatite (CDHA) powders. The fibroblast growth factor (bFGF) incorporated in a collagen sponge sheet was sustained release in the mouse subcutis according to the biodegradation of the sponge matrix and exhibited local angiogenic activity in a dose-dependent manner 51 A biodegradable graft material containing the collagen micro sponge was developed for cardiovascular tissue grafting, as it would permit the regeneration of the autologous vessel tissue 52.

Long-Lasting Coloured Cosmetics: Coloured cosmetics formulated with micro-sponges entrapment are highly graceful due to uniform spreading and improved covering; it includes coloured cosmetic products such as rouge or lipsticks 53, 54. Some marketed formulations of microsponges are given in Table 3.

Recent Advances in Microsponge Drug Delivery System: With the development of nanotechnology, the Pharmaceutical Industry has become very advanced; they shifted the formulation process from micro to nanosized particles. Nanosponges are hyper cross-linked polymer based colloidal structures, consisting of countless interconnecting voids within a collapsible structure with porous surface 72. These sponges are incorporated in cosmetics and sunscreens as antioxidants and antireflectants 76. 77β - CD nanosponges were developed that can be used for hydrophilic as well as hydrophobic drugs like Flurbiprofen, dexamethasone, itraconazole, doxorubicin hydrochloride and serum albumins model drug. These nanosponges were developed by cross- linking the β CD molecule by reacting it with Biphenylcarbonate. Some researchers also observed nanosponges as a good carrier for the delivery of gases. Researchers also observed that incorporating a cytotoxic in a nanosponge carrier system can increase the potency of the drug, suggesting that these carriers can be potentially used for targeting the cancerous cells 78. Swaminanthan et al., 2007 formulated cyclodextrin nanosponges for solubility enhancement of itraconazole, a poorly water-soluble drug 79. Sharma and Pathak, 2011 fabricated ethyl cellulose nanosponges as an alternative system for targeting econazole nitrate to the skin through hydrogel formulation 80. Improved stability of RNA and a relatively effective encapsulation process of siRNA was prepared. The approach could lead to novel therapeutic routes for siRNA delivery 81. The babchi oil-loaded cyclodextrin nanosponges were also fabricated by a research group for solubility and photostability enhancement of entrapped essential oils 82.

TABLE 4: EXAMPLES OF MICROSPONGE DRUG DELIVERY WITH THEIR FORMULATIONS 63, 65

CONCLUSION: MDS is a spherical, porous, polymeric, and patented delivery system used for prolonged topical administration. It is used to increase the solubility of poorly water-soluble drugs by entrapping such drugs in the micro sponges pores. Due to the tiny pores of microsponges, the drug is reduced to microscopic particles, hence increased surface area thus, this greatly increases the solubility. Micro sponges are designed to deliver a pharmaceutically active ingredient efficiently at a minimum dose with enhanced stability, reduced side effects and modified drug release profiles. In this system, the active ingredient resides in a carrier system, which allows us to change the time duration of the drug and its therapeutic index. With the help of MDS system, we can prepare the formulation of immiscible products and also improves material processing, e.g., liquid can be converted to powders. This system is used to prepare oral, topical and biopharmaceutical formulations. It also offers the formulator a range of alternatives to develop drug and cosmetic products.  This is due to the high loading capacity and sustained release ability of microsponges. Hence, microsponge-based formulations are control released and have better therapeutic effects than conventional formulation.