ABSTRACT: Hepatic cancer is one of the most causes for cancer death in the world. The aim of this work was to compare and survey the cytotoxic activity of a group of differently classed flavonoids and three plant extracts known for their high antioxidant activities against Hep-G2 human cancer cell line. Also to isolate some flavonoids from the plant extracts using easier, modified methods of higher yield and lower time of extraction than conventional ones. Different flavonoidal classes were tested against Hep-G2 human cancer cell line using SBR assay. Doxorubicin was used as a positive control. Dihydroquercetin was found to be more potent even than Doxorubicin. It showed the higher activity with IC50 = 4.43±0.08 μg/ ml followed by quercetin and rutin with IC50 = 7.88±0.89 and 11.2 ±0.97μg/ ml respectively. Among the tested extracts, rosemary alcoholic extract was the potent followed by green tea alcoholic extract and orange peel alcoholic extract was the less potent. Their IC50 values ranged from 11.5±1.02μg/ml to 48.2 ±1.8μg/ ml. Diosmin and catechins showed no activity against Hep-G2 human cancer cell line. IC50 of Doxorubicin was calculated as 5.14 ±0.09 μg/ml. All the tested plant extracts showed cytotoxicity especially rosemary extract which was highly potent with IC50 = 11.2±0.97μg/ ml

INTRODUCTION: Primary liver cancer is the sixth most frequent cancer and the second leading cause of cancer death (World Health Organization 2014). The incidence of hepatocellular carcinoma is increasing in many countries especially in developing areas 1. Flavonoids are ubiquitous in nature and have been shown to reveal cytotoxic activity toward various human cancer cells with little or no effect on normal cells 2.

Quercetin, can inhibit the proliferation of different cancer cells 3, 4. Concerning hepatic cancer, it was proved that quercetin exerted its preventive effect via decreased oxidative stress and decreased antioxidant activity in rats 5. Hesperdin was found to show cytotoxic effect on MCF-7 cells with IC50 of 11 µmol/L. It showed invitro synergism effect with Doxirubicin 6. Another study 7 investigated the antiproliferative effect of hesperidin on human hepatocarcinoma HepG2 cell line. Morin, the flavonol prevented acute liver damage following CCl4 administration in rats by inhibiting tumor necrosis factor 8. Other morin cytotoxicity was reported against liver, intestine and breast tumors 9. Combination of diosmin and hesperidin 9:1, as in the preparation ""Detralex" increased hepato- protective effect 10. 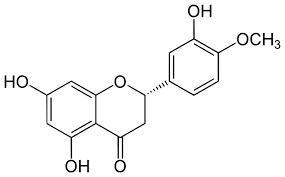 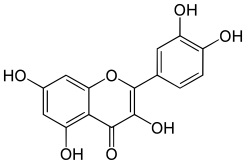 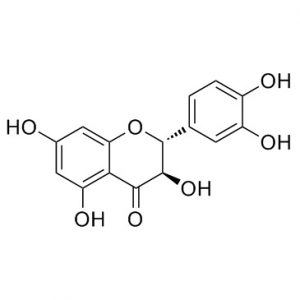 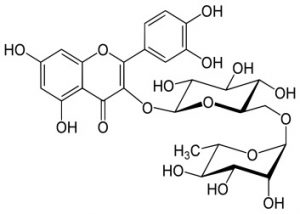 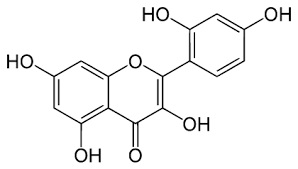 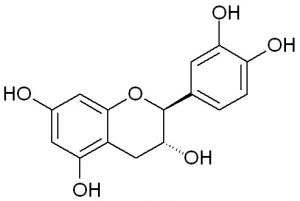 Preparation of Alcoholic Extract of Orange Peel: Fruits of Citrus sinesis (Balaby) were chipped to thin, small slices then dried at room temperature to give 50 g of whitish orange powder.  Powder is then extracted with 70% alcohol three times each of 100 ml till exhaustion. The total alcoholic extract is then collected and evaporated on rotary vapor under reduced pressure at 50 °C. The brownish residue (7.8 g) had a characteristic odor.

Isolation of Hesperidin from Orange Peel: Fuits were peeled off sharply and then chipped to thin, small slices then dried at room temperature to give 250 g of whitish orange powder. Powder was defatted with light petroleum then mixed with 600 ml of 10% calcium hydroxide, pH was adjusted to 11. Solution was then microwaved in 600w microwave at 90 °C for 3min initially then off for 2 min then microwaved again for another 2 min. Microwaving on and off was repeated for three times. The solution was cooled and then acidified by dilute HCl till pH = 5 was reached and centrifuged for 3 min. The solution was kept in refrigerator for 8 hours. Crude hesperidin (10.8 g) was separated that was filtered through Buchner funnel then dissolved in dimethylsulfoxide, stirred and heated to 60 - 80 °C the water is added slowly whilst stirring.

Microwaved Assisted Hydrolysis of Compound H1 to compound H2: Compound H1 (5g) was dissolved in 300 ml of 0.25M H2SO4:C2H5OH (2:8) mixed well then the hydrolysis reaction was done in 600 w microwave at 120 °C a total time of 10 min. Procedure was carried out as following: the solution was microwaved for 3 min initially then off for 2 min, microwaved again for another 3 min then off for 2 min followed by on for 4 min. Sample interval was taken after 10 min and examined by TLC using solvent system. Complete hydrolysis achieved after 20 min and recognized by the appearance of nearly one major spot on TLC plate. The resulting solution was concentrated and then extracted with ethyl acetate (100 ml x3). The collected ethyl acetate layer was concentrated under reduced pressure till residue.  Crude crystals were purified by dissolving residue in minimum of acetone, and the resulting solution was added to a mixture of water and acetic acid in an ice bath. Pure yellow powder of compound H2 (2.8 g) was obtained. TLC of the isolated compound on silica gel F254 using methanol/ chloroform (9.5:0.5) as solvent system and iodine vapour for detection gave one spot Rf =0.72.

Isolation of Compound C from Green Tea: The powdered plant (250 g) was macerated with 500 ml distilled water then microwaved at 600w at 90 0C for 4 min. The solution was then filtered.

The filtrate was centrifuged at 800 rpm. The supernatant was lyophilized to give dark greenish residue (17.5g). One gram was kept for chromatographic test and cytotoxic activity. The bulk residue (16.5g) was partitioned between ethyl acetate: water (1:1) for three times.  The combined ethyl acetate layers were concentrated to small volume and decaffeinate by the addition citric acid solution 15 followed by extraction with ethyl acetate. The collected ethyl acetate fractions were then concentrated under reduced pressure to give 11.74 g of buff powder.

Recrystallization from hot water was repeated several times to improve the yield. Purification of the isolated compound was done on Sephadex LH20 column to give 8.4 g buff- white powder.

Preparation of Alcoholic Extract of Rosemary: Rosumarium officinale was powdered yellowish to light brown residue, of characteristic odor that weigh 3.5g. TLC analysis of Rosumarium officinale residue on silica gel F percolated plates showed five spots using ether: CHCl3 (8:2) as solvent system and anisaldehyde/ H2SO4 as spray reagent. Rf of these spots were: 0.21, 0.31, 0.52, 0.89 and 0.96. Using solvent system CH2Cl2: CH3OH (6:1) and UV detection before and after spraying with AlCl3. Rf of these spots and their color under UV lamp were: 0.08 yellow, 0.31 brownish, 0.61 yellow, 0.82 greenish yellow and 0.94 yellow.

Determination of Anti-hepatocytotoxicity of the Extracts and Flavonoids:

(3-(4, 5-di-methylthiazol-2-yl) - 2, 5-diphenyltetra- zolium bromide) method by Skehan et al., 16, Adriamycin® (Doxorubicin) 10 mg vials Pharmacia, Sweden) was used as the reference drug. Briefly, cells were seeded in 96-multiwell plates at densities of 104 cells/well in a fresh media and incubated under normal growth condition for approximately 24 h before treatment with the tested sample to allow attachment of cells to the wall of the plate. Then, 200 μl aliquot of serial dilution with DMSO (100%) of each of the total alcoholic extracts of orange peel, green tea and rosemary and the isolated flavonoids (hesperidin, hesperetin and ± catechin) as well as the purchased flavonoids (quercetin, dihydroquercetin, morin, diosmin, rutin (0, 1, 2.5, 5 and 10μg/ml) were added and the plates were incubated for 24, 48 and 72 h at 37 °C in a humidified incubator containing 5% CO2 in air.

Control cells were treated with vehicle alone. Three wells were prepared for each individual dose. Following 24, 48 and 72 h treatment, cells were fixed, washed and stained with Sulforhodamine B stain (Sigma, USA). Color intensity was measured in an ELISA reader spectrophotometer (Tecan Group Ltd. Sunrise, German). The relation between the mean of surviving fraction and drug concentration is plotted to get the survival curve of each tumor cell line after the specified plant extract. Negative control was treated with the vehicle (0.1% DMSO) used for diluting the tested drug.

Isolation of Compound H1 from Orange Peel:  Compound H1 has melting point of the isolated crystals was 260 - 262 °C. It gave positive Molisch test for glycosides.

IR of the isolated compound H1 was superimposed with an authentic sample of hesperidin.

1H NMR of the isolated compound H2 was identical with that reported for hesperetin 18.

Hepatocytotoxicity of the Three Plants Alcoholic Extracts and the Flavonoids: The three plant extracts showed cytotoxicity against Hep-G2 human cancer cells. Rosemary extract showed to be the most potent with IC50= 11.2 ± 0.97μg/ml. Green tea was found to be more potent than orange peel extract with IC50 values of 35.5 ± 1.1μg/ml followed by 40.1 ± 1.45μg/ml. The results are shown in Fig. 2. Within the tested flavonoids, dihydroquercetin showed high potency. It showed the higher activity with IC50 = 4.43 ± 0.08 μg/ml followed by quercetin and rutin with IC50 = 7.88 ± 0.89 and 11.2 ± 0.97μg/ml respectively. The results are shown in Fig. 3. 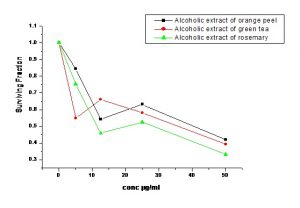 Comparison between cytotoxic activities of all the tested extracts and flavonoids together with Doxorubicin against Hep-G2 human cancer cells is shown in Fig. 4. All results are tabulated in Table 1. 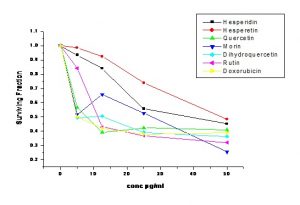 FIG. 4: COMPARISON BETWEEN CYTOTOXIC ACTIVITIES OF ALL THE TESTED EXTRACTS AND FLAVONOIDS TOGETHER WITH DOXORUBICIN AGAINST Hep-G2 HUMAN CANCER CELLS

TABLE 1: CYTOTOXIC ACTIVITIES OF THE TESTED FLAVONOIDS AND THE THREE PLANT ALCOHOLIC EXTRACTS AS WELL AS DOXORUBICIN AS A POSITIVE CONTROL AGAINST Hep-G2 HUMAN CANCER CELL LINE

DISCUSSION: In this work, hesperidin hydrolysis was achieved using microwave assisted method only in 20 min. Also, the yield was higher by this new method as yield of crude hesperidin was 4.32% and that of pure hesperidin was 2.84%. The parallel ordinary method 19 gave only 3.9% crude hesperidin and 2.25% of pure hesperidin.  In case of ± catechin extraction from green tea, by the method used in this work, the yield given was 73.22mg % while that of the similar ordinary method of isolation and decaffeination 15 gave only 69.447mg %.

Concerning the anticancer activities, rosemary alcoholic extract was found to show much more potency against Hep-G2 human cancer cell line. It showed IC50 = 11.5 ± 0.97μg/ml. This means that its potency is more than 3 times as potent as the highly antioxidant plant extract of green tea (IC50 = 35.5±1.1 μg/ ml).  Glycosylation of hesperetin with rutinoside in C7 resulted in increase in potency (IC50 = 38 ± 0.08) as in hesperidin. However glycosidation of quercetin in C3, as in rutin, resulted in decrease its anticancer activity against Hep-G2 (IC50 = 11.2±0.97 μg/ml).

Diosmin is a flavone constituent of both rosemary 20 and in orange peel 15. It showed no anticancer activity against Hep-G2 human cancer cell lines in this work. This may agree with previous reported results 21 showed that diosmin has low antioxidant properties due to its structural characteristics and showed low cytotoxicity against lung and breast cancer cell lines. Among the two tested flavonolaglycones, quercetin showed much higher (nearly 4-fold) anti-hepatocytotoxicity than morin. Reduction of C2-C3 double bond in quercetin (as in dihydroquercetin) nearly doubled its activity and gave a highly potent cytotoxic drug against Hep-G2 that is even more potent than Doxorubicin itself. Fortunately, taxifolin was reported to be not mutagenic and less toxic than quercetin 22.

This work results differ from that reported against breast cancer cell lines 23 that concluded that for flavonoids to be strongly cytotoxic, they must possess the 2, 3-double bond in the C-ring.

CONCLUSION: The results of this investigation clearly prove potent anticancer activities of rosemary extract with a low IC50 value. Also, the study ascertains the value of flavonoids as anticancer drugs against liver cancer and reports for the first time a potency comparison of 8 flavonoids related to different groups. It was wonderful to investigate that dihydroquercetin (taxifolin) is more potent than Doxorubicin with IC50 = 4.45 ± 0.08 μg/ml. Taxifolin is one of flavonoidal constituents of different plants including the highly known hepatoprotective drug silymarin extract from the milk thistle seeds 24. Thus this hepatoprotective activity may be related to its content of dihydroquercetin. It acts as a potential chemo-preventive agent against ovarian 25 and breast 26 cancers. Thus taxifolinis a promising flavonoid as anticancer against Hep-G2 as well as its chemopreventive activity. Its value may be increased being comparatively safe. This study also develops an effective extraction and acid hydrolysis method utilizing microwaves that results in rapid penetration of the plant tissues.

ACKNOWLEDGEMENT: The cytotoxic activities were performed in the National Cancer Institute, Cairo, Egypt.