A. Maheshwari * and S. Loonker

ABSTRACT: A new derivative of Guar gum, incorporated with 1, 3, 4-thiadiazole nucleus was synthesized by using a new green and efficient synthetic approach. Guar gum is a biodegradable polymer having numerous applications in various industries. Thiadiazole compounds are well known in the therapeutic world due to their pharmacological importance. The newly synthesized derivative was characterized by IR, H1 NMR, and mass spectrometry. Its antioxidant activity was determined by hydrogen peroxide scavenging activity. Its antimicrobial activity was also studied.

INTRODUCTION: Green color signals to proceed and green chemistry signals to sustain. In the present study, a significant greener approach of synthesis, i.e., microwave assisted synthesis is used to synthesize a novel derivative. Microwave irradiation assisted chemical transformations are pollution free, quicker, eco-friendly and offer high yield together with simplicity in processing and handling 1. Guar gum (Cyamopsis tetragonoloba) represents Galactomannan family of polysaccharides. It is a nontoxic, biodegradable natural polymer by modifying rheological properties. Although this is easily available at a low cost, but its uncontrolled hydration upon storage and further microbial contamination limit its long term application.

Chemical modification of Guar gum diversifies and enhances its applications and functionality 2-3. Here we have incorporated a therapeutically important heterocyclic nucleus 1, 3, 4- thiadiazole in Guar gum. 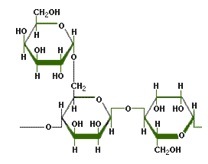 1, 3, 4-thiadiazole has gained significant attention due to its diverse range of biological properties. This heterocyclic nucleus exhibited remarkable pharmacological activities such as anti-inflam-matory, anticancer, antimicrobial, antioxidant, anti-anxiety, analgesic, diuretic, antidiabetic due to the presence of N=C-S moiety and strong aromaticity of the ring which leads to greater in-vivo stability and lesser toxicity. So when this thiadiazole moiety is attached with natural polymer Guar then compound containing outstanding antimicrobial and antioxidant properties are obtained 4-5.

Synthesis of Epoxy Ether of Guar: One mole of guarana powder was slurred in DMSO solvent in a round bottom flask. Then 50% aqueous NaOH was added in the slurry to make the reaction mixture alkaline, and the mixture was constantly magnetically stirred at 45 °C for 2 h. Further 1 mole of epichlorohydrin was added gradually with continuous stirring, and the pH was adjusted to 9-10 then this reaction mixture was subjected to microwave for 15 min. Later, the compound was filtered on vacuum pump with 80% aqueous methanol containing few drops of nitric acid to remove inorganic impurities of chloride ion and excess of alkali 6. 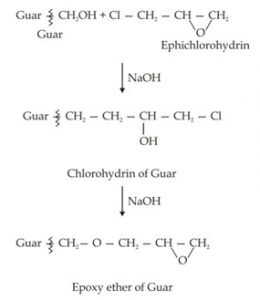 Synthesis of 5-(arylamino)- 2-sulfanyl 1, 3, 4- thiadiazole: 0.1 moles of aniline was dissolved in 20 ml of ammonia solution to which 0.1 moles of carbon disulphide was gradually added with constant stirring. The temperature of the solution was kept below 30 °C. 20-25 ml of ethanol was then added, and the stirring was continued till all the carbon disulphide dissolved. The reaction mixture was then allowed to stand for 2 h.

An equimolar quantity of sodium hydroxide and monochloroacetic acid were taken, dissolved separately in water and cooled. After cooling, mix the solutions to obtain sodium salt. This sodium chloroacetate solution was added to the reaction mixture followed by the addition of 10 ml of 50% hydrazine hydrate. The mixture became warm; it was cooled, filtered, dried and recrystallized with ethanol 7. 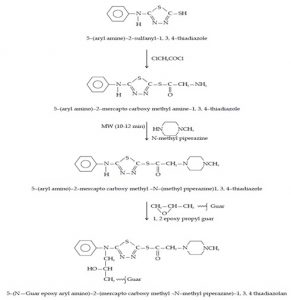 Antimicrobial Activity: An antimicrobial agent has the capability of destroying or inhibiting any disease-causing microbes. It can be a chemical, or a physical agent. 1, 3, 4 thiadiazole is an important scaffold known to be associated with several biological activities. It can act as a bio-isosteric replacement of the thiazole moiety. So it can act like 3rd and 4th generation of cephalosporins, hence can be used in antibiotic preparation. The newly synthesized compound was screened for its antibacterial and antifungal activities against Escherichia coli, Klebsiella pneumonia, Staphylococcus aureus, Coagulase-negative staphylococci (CONS), Candida albicans and Candida parapsilosis.

A pure isolate of each bacterium and fungi are the first subcultured in nutrient broth at 37 °C for 24 h and 48 h respectively. Then these were mixed with sterile physiological saline (0.9%), and the turbidity was adjusted to the standard inoculums of Mc Farland scale (0.5 for bacteria and 2.0 for fungi). The inoculums were spread on the surface of the solidified media. Wells of approx 6 mm were dig on the sterile agar plate, and solution of the derivative is filled in a well. DMSO was used as the solvent for the compounds. A blank test was carried out to check the antimicrobial activity of DMSO. Standard drugs, ampicillin for bacteria and fluconazole for fungi were used. Plates were incubated for 1-2 days. Zones of inhibition were measured 8-11.

Antioxidant Activity: Antioxidants are compounds capable to either delay or inhibit the oxidation processes which occur under the influence of atmospheric oxygen or reactive oxygen species. They are involved in the defense mechanism of the organism against the pathologies associated with the attack of free radicals. Free radicals are responsible for causing a large number of diseases including cancer, neural disorders, Parkinson’s disease, and aging. Protection against free radicals can be enhanced by ample intake of dietary antioxidants.

In the present study, the antioxidant activity of newly synthesized derivative is analyzed by H2O2 scavenging assay 12-14.

At = absorbance of the test sample 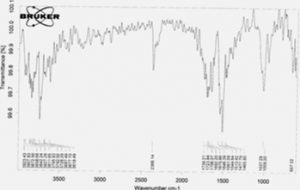 Mass Spectral Analysis:  DART-MS was recorded on a JEOL-AccuTOF JMS-T1OOLC Mass spectrometer having a DART (Direct analysis in real time) source. The compound was subjected as such in front of DART source. Dry Helium was used with 4 LPM flow rate for ionization at 350 °C. The orifice 1 was set at 28 V. Mass spectral analysis- Base peak at 157.07 Fig. 7. 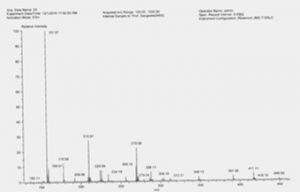 H1 NMR Analysis:  NMR Spectra was determined by Bruker AV-II 300 MHz FT-NMR Spectrometer. The compound was dissolved in DMSO. The interpretation shows a peak at δ3.46 for aromatic amine proton (C6H5N-H). Other peaks at δ2.5 to 3.5 may be due to methylene protons, and the upfield signal at δ 7.35 is due to aromatic proton (Ar-H) Fig. 8. 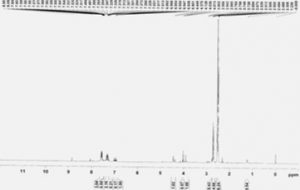 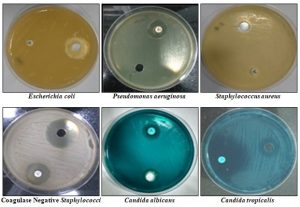 Antioxidant Activity: The hydrogen peroxide scavenging activity shows that the oxidation power of the compound decreases with increase in time. 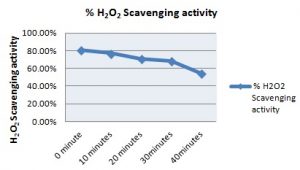 CONCLUSION: Microwave assisted synthesis has now become an important part of the organic synthesis. The properties of the synthesized compound are superior to the compound that synthesized by heating method. The compound showed good antimicrobial and antioxidant properties. So there is ample scope to extend the applicability of this technique.

I would like to extend my sincere thanks to Dr. Mala Rathore and Mr. Mahendra from Arid forest research institute for providing guidance and necessary instruments for carrying out antioxidant activity.

A. Maheshwari * and S. Loonker