Department of Medicinal and Pharmaceutical chemistry, Faculty of Pharmacy, University of Tripoli, Tripoli-Libya

Tuberculosis is an infection bacterial disease caused by Mycobactrium tuberculosis, which most commonly affects the lung, it can be treated with Anti-TB drug which are classified into first and second line drug classes where the treatment regimen consists of two phases: the initial phase and the continuation phase. Isoniazid is one of the most important first line drugs for the treatment of tuberculosis and several methods have been reported to describe the quantitative determination of isoniazid, include the derivatization of isoniazid with several aldehydes to form the corresponding Schiff's base. The aim of this study is to find a new spectrophotometric method for isoniazid (INH) analysis that combined the previously mentioned derivatization (hydrazone formation) with microwaves synthesis in order to achieve more accurate, rapid and simple method. The use of the microwaves to accelerate and quantitatively complete the reaction between isoniazid and the aldehyde is the most important modification we suggest in comparison to other previously mentioned method. Seven isoniazid Schiff's bases of several aldehydes subjected to our investigation were synthesized, purified and the maximum absorbance for each pure Schiff's base derivative was determined. The results obtained in the current study indicate that only 4- dimethylaminobenzaldehyde show no interference with its corresponding Schiff's base derivative (SIP) and enable us to quantitatively determine the concentration of SIP in the presence of the starting aldehyde. The calibration curve was made and validated.  The absorbance of the sample tested was 0.54 at 421 nm, and according to the equation obtained from the calibration curve, the sample concentration result equal 3.02 mg/ml. with the percent purity 96.5 % w/w.

INTRODUCTION: Isoniazid, pyridine-4-carbohydrazide, is also known as isonicotinylhydrazine (INH), and it is one of the most keystones drug widely used as antitubercular agent for prevention and treatment of the disease 1.  It is an organic compound was first discovered in 1912, and later in 1951 was found to be effective against tuberculosis 2.

The minimum inhibitory concentration (MICs) of isoniazid for wild-type (untreated) strains of Mycobacterium tuberculosis is < 0.1 µg. ml-1 3. Isoniazid is a prodrug and must be activated by a bacterial catalase-peroxidase enzyme (KatG) 4, which condensate the isonicotinic acyl with NADH to form isonicotinic acyl-NADH complex.

This complex binds tightly to the enoyl-acyl carrier protein reductase known as InhA, thereby blocking the natural enoyl-AcpM substrate and the action of fatty acid synthase II system (FAS II). This process inhibits the biosynthesis of mycolic acid, which are essential components of the mycobacterial cell wall 5, 6.

Several methods have been reported to describe the quantitative determination of isoniazid in its available tablet, syrup and injectable dosage forms; these methods can be classified as official (pharmacopeial) and non-official (non-pharmacopeial) methods. Bromometric titration is a representative example for the first class, which described in BP 2009, where potassium bromate is used as titrant and methyl red as indicator 7. Another official titrimetric method is the diazometric titration which described in USP 2007 for the assay of isoniazid in its oral solutions, and the end point where determined electrometrically using suitable electrode (platinum-calomel or platinum-platinum) 8. Important chromathographic official method for quantitative assay of isoniazid was described in USP 2007 for the assay of isoniazid as a raw material, tablet, and injectable preparations, where the high performance liquid chromatography (HPLC) is used with docusate sodium in methanol, water and 2 N sulphuric acid as mobile phase and ultraviolet spectrophotmeter as detector 8.

Several research group reported many non-official methods for the quantitative analysis of isoniazid in pharmaceutical preparation and in biological fluid using chromatographic techniques as HPTLC 10, 11, GC 12, HPLC 13-15, and capillary electrophoresis 16, 17. Other method is based on spectrometric techniques as spectrophotometric 18-20, spectro-fluorimetry 21, atomic absorption 22, and flow injection 23. 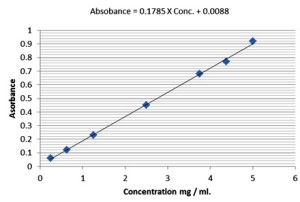 where each Schiff's base derivative obtained by weighing equimolar amount of the starting material (isoniazid and aldehyde). Mixed in small vial then the vial transferred into Microwave. The time and the power of microwave were adjusted, started with 2 minutes and 300 watt and so the reaction was started.

The progress of the reaction was monitored by TLC within time interval or by changing the watt used; both time and watt were achieved for each compound synthesized. The preformed coloured Schiff's base were purified by recrystallization technique using ethanol and confirmed by TLC. The purity of the product was further confirmed with HPLC using water: acetonitrile (1:1) as mobile phase and then the product was characterized by infra red spectroscopy.

The reaction mixture was then dissolved in 10 ml methanol and the volume was adjusted to 25 ml using volumetric flask (solution INH1). Accurately, 5 ml aliquot of this solution was transferred to 25 ml volumetric flask and made up to volume by Methanol (solution INH2). The maximum absorbance of each pure Schiff's base derivative was determine and compared with that both isoniazid and the aldehyde to insure that no interference from the unreacted starting material occur.

Using of N'-{(E)-[4-(dimethylamino)phenyl] methylidene}pyridine-4-carbohydrazide (SIP) for the quantitative assay of isoniazid:

(0.2 g, 1.4583 mmol) of isoniazid was added to (0.2611 g, 1.7500 mmol) of 4-dimethylaminobenzaldehyde in (1mol: 1.2 mol) ratio relative in a small vial. The reaction was accelerated using microwave (450 watt for 1.5 minutes). The pure SIP was achieved by recrystallization from ethanol and the TLC of the pure product indicated that both isoniazid and the aldehyde were not detected. The purity of the product was confirmed as well with the help of HPLC using water: acetonitrile (1:1) solvent system. The infrared spectrum of the resulted compound was recorded.

The reaction mixture was then dissolved in 10 ml methanol and the volume was adjusted to 25 ml using volumetric flask (solution INH1). 5 ml aliquot of this solution was transferred to 25 ml volumetric flask and made up to volume by Methanol ( solution INH2),  then the absorbance was measured at 421 nm against methanol as blank and both concentration and percent purity of the sample was calculated.

Calibration curve was prepared using 25 ml of standard solution containing 0.25-5 mg/ml SIP. The absorbance of each standard solution was determined at 421nm. The resulted curve plotted and it was used for determination of the test sample concentration.

RESULT: Seven aldehydes and their isoniazid Schiff's base derivatives investigated in this work were given in Table 1.

TABLE 1: THE MAXIMUM ABSORBANCE OF THE ALDEHYDES AND THEIR SCHIFF'S BASE 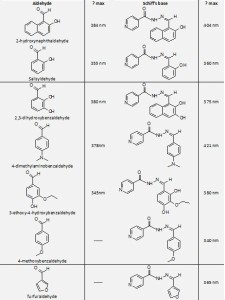 The infrared study, shown the spectrum of the compound SIP indicated the formation of the Schiff's base as the carbonyl group of the aldehyde was disappeared and another band at 1442 appear which related to the imine functionality.

The experiment was validated then the results were plotted, the curve obtained is represented in figure 2.

The sample to be tested was prepared and the absorbance result was 0.54 at 421 nm. According to the equation obtained from the calibration curve, the sample concentration was equal 3.02 mg/ml. The theoretical concentration calculated depending on the molar equivalent of both isoniazid and SIP Schiff's base where, 137.14 g isoniazid react with 4-dimethyl aminobenzaldehyde forming 268.31 g of SIP and so, 0.200 g isoniazid used produce 0.3913 g SIP in 25 ml solution (INH 1) and the concentration of the same compound in the solution INH2 is 0.0782g/25 ml, which equivalent to 3.13 mg /ml SIP.

DISSCUSION: The use of coloured Schiff's base derivatization is extensively used to the quantitative determination of isoniazid, but most of the reported methods either need specific instrumentation or need tedious synthetic procedure which makes the procedure inapplicable in many laboratory. In the current work, we test the possible use of microwave synthesis to assist the derivatization procedure and making it more rapid and efficient as in general the yield almost improved. The derivatization is depending on the reacting of isoniazid and aldehyde to form the imine functionality (green colour in the scheme).

Recently Microwave irradiation consider as a new tool and facile method for synthesis of some difficult prepared chemical compound [30]. The use of Microwaves to accelerate and quantitatively complete the reaction between isoniazid and the aldehyde is the most important modification we suggest in comparison to other previously mentioned method. Although the study included a chemical reaction  formation of a new compound, but the use of the microwave make the procedure easier by the advantages of low cost and less time consumption (by using the microwave, the reaction occurred within minutes). Another advantage is the quantitative reaction, which is the basic of this study as all the molecules of isoniazid are converted to a coloured product which can be quantitatively estimated.  In order to achieve a good result and making our method applicable, we determined the aldehyde which could be used, having no interference with our procedure through their chromophoric group.

From seven isoniazid Schiff's base synthesized, only 4-dimethylaminobenzaldehyde given a   satisfactory result, where the maximum absorbance of the 4-dimethylaminobenzldehyde is 378 nm and that of SIP is 421 nm, in addition, the free aldehyde has no absorbance at 421 nm and this enable us to quantitatively determine the concentration of SIP in the presence of the starting aldehyde.

Preliminary experiment was done in order to ascertain the quantitative reaction between the isoniazid and the 4-dimethylaminobenzaldehyde. First we started the reaction by using equimolar amounts of the isoniazid and aldehyde, the reaction is not completed as not all isoniazid was reacted. So changing the number of moles in which 1.2 mol of aldehyde is used instead of 1 mol and the relative amounts begun 1 mol of isoniazid to 1.2 mol of the 4-dimethylamino benzldehyde and this relative number of moles was utilized for analytical method to insure the quantitative reaction.

The pure SIP was achieved by recrystallization from solvent methanol and the TLC of the pure product  indicated that both isoniazid and aldehyde were not detected. The purity of the product were confirmed as well with the help of HPLC using water: acetonitril (1:1) as mobile solvent. The infrared  spectrum indicate that new compound is formed, where, the carbonyl group of the aldehyde was disappeared and another band at 1442 appear which related to the imine.

The calibration curve was constructed and the experiment validated. The sample to be tested (INH2) was prepared. The absorbance result was 0.54 at 421 nm, and according to the equation obtained from the calibration curve, the sample concentration result was equal 3.02 mg/ml. while from, theoretical concentration calculated for SIP prepared from 0.200g  isoniazid using molar equivalents of both isoniazid and SIP was 3.13 mg /ml SIP  in the solution INH2.  The percent purity in this experiment was calculated and found to be equal  96.5 % w/w.  From results of this experiment we can say that our technique applied can be used as an accurate assay for measuring INH,  it is rapid can save time to analyst  as well as simple, so can be applied in poor countries where TB is more prevalence.

Department of Medicinal and Pharmaceutical chemistry, Faculty of Pharmacy, University of Tripoli, Tripoli-Libya