ABSTRACT: Midazolam is used as short-acting pre-anesthetic benzodiazepine with solubility of <0.1mg/mL at neutral-pH, which increases considerably in acidic media. Midazolam commercial acidic aqueous parenteral formulation (pH~3.3) causes pain and inflammation at administration site, which induces low patient-compliance. According to the absence of non-parenteral formulation, available parenteral dosage-form administered orally that showed bitter-taste with low bioavailability. Alternatively, intranasally administration was rapidly absorbed, with improved bioavailability. However, not only causes nasal mucosa irritation due to acidic media, but also needs large solution amount because of midazolam low solubility. On contrary of previous studies, which focused on solubility improvement in acidic pH, the aim of this study is to compare solubility enhancement techniques at nasal physiological pH (6). Different techniques evaluated including buffer solutions (Britton-Robinson, citrate and phosphate), inclusion-complexation (β-CD), polymeric-micellar-solubilization(HPMC) and co-solvency (PEG400 and P.G) separately in mentioned buffers. Ternary-diagram with the best-selected system examined in different ratios. As a result, phosphate buffer in combination with applied techniques indicated solubility enhancement ratio of 17.9, 22.7, 16.8 and 30.9 for β-CD, HPMC, PEG400 and P. G respectively. Best ternary-system was 0.3:0.1:0.6 P.G:PEG400:Phosphate buffer, obtained 28.2-fold solubility enhancement. It may suggested that solubilizing techniques especially co-solvency showed acceptable enhancement at nasal pH.

INTRODUCTION: Midazolam hydrochloride is a short-acting benzodiazepine used as a preoperative sedative drug in many pediatric medical procedures. It is also administered in status epilepticus in children 1, 2. Midazolam is a weak acid (pKa 6.2) in pH>4 and exists in un-ionized form 3, with hydrophobic properties in neutral and physiological pH 4 therefore, it is commercially formulated in acidic pH (approximately 3) for better solubility, which cause pain and irritation in administration site 2, 5.

Nasal route is recently recommended for midazolam because of highly vascularized nasal mucosa that helps rapid systemic absorption and direct drug delivery to the cerebrospinal ﬂuid leading faster onset of action. However, acidic pH of the formulation may cause inflammation and irritation in nasal cavity 2, 6.

Various studies examined one or two solubility enhancement techniques separately or in combination in acidic pH (pH<4) for midazolam 9. The aim of this study was to improve midazolam solubility applying four common enhancing strategies with different mechanisms at nasal physiologic pH (6) which are included:

The effect of four mentioned techniques was evaluated separately and in combination.

Calibration curve was validated by linearity, precision, accuracy, limit of detection (LOD) and limit of quantitation (LOQ). The linearity was calculated by the least square regression method. The precision of assay -the degree of repeatability of an analytical method- was determined by repeatability (intraday), intermediate precision (inter‐day) and reported as %RSD for a statistically significant number of replicate measurements. The LOD and LOQ were determined using equations (1) and (2):

Where σ is standard deviation of Y‐intercept and S is slope of calibration curve 15.

2.4. Saturation solubility studies: Saturation solubility studies were carried out as described by Higuchi & Connors 4. Briefly, excess amount of midazolam was added to flask containing different solvents and samples were continuously agitated at 100 rpm for 24 h at 25°C. At the end of 24 h, the samples were centrifuged and the supernatant was filtered (0.45 micron) and analyzed for drug content using analysis method.

The solubility enhancement ratios (SER) were calculated according to the following equation 17:

In this study, control solution was water pH 6.

Phase-solubility profile was obtained by plotting the solubility of midazolam against the concentration of β-CD used. The slope of this equation is considered as stability constant (K1:1) of the complex. Each experiment was implemented triplicate 18.

The intrinsic solubility (S0) of the drug in the aqueous complexation media (i.e. drug solubility when no cyclodextrin is present using equation 3 19:

2.5.2.2. Polymeric micellization effect: Excess amount of midazolam was added to 5 mL citrate, Britton- Robinson and phosphate buffer in screw-capped vials, containing 1.5, 2 and 3% w/v HPMC. Phase-solubility profile was obtained by plotting the solubility of midazolam against the concentration of HPMC used. Each experiment was carried out triplicate.

The logarithmic relationship between total drug solubility in a mixed-solvent system and the volume fraction of the stronger solvent can be described by Equation 4:

As mentioned in Table 1, ternary diagram for midazolam solubility with mixture of different concentrations of P.G, PEG400 and P.G:PEG 400 (that concluded better results in previous sections) were studied in phosphate buffer.

3.1. Calibration Curve validation: Calibration curve data were constructed in the range of the expected concentrations of 4.7μg/mL to 75μg/mL in water, citrate, Britton- Robinson and phosphate buffer solutions pH 6. The regression equation and the correlation coefficient (r2) of the standard curve were reported in Table 2. Furthermore, validation results of calibration curves results containing precision, accuracy, LOD and LOQ are illustrated in Table 3.

3.2.2.1. β-CD complexation: The phase-solubility profile of midazolam with β-CD at pH 6is presented in Fig. 1. As it was predictable, β-CD enhancement effect on midazolam solubility is completely distinctive. SER for β-CD in citrate, Britton- Robinson and phosphate buffer was 6, 11.9 and 17.9 respectively. According to phase-solubility diagram K1:1 was calculated 337, 95 and 260 M-1 for Britton- Robinson, citrate and phosphate buffer, subsequently. 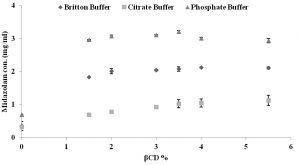 In comparison with buffers alones, β-CD could increase midazolam solubility in citrate, Britton- Robinson and phosphate buffer 2.9, 5.8 and 4.4 fold respectively.

3.2.2.2. HPMC effect: The phase-solubility profile of midazolam with HPMC at pH 6is illustrated in Fig. 2. As it is obvious, HPMC caused enhancement in midazolam solubility. SER for HPMC in Britton- Robinson, citrate and phosphate buffer was 6.1, 18.2 and 22.7 respectively. The average of solubilizing enhancement power ratios for HPMC in comparison with Britton- Robinson, citrate and phosphate buffer were 3.0, 9.7 and 5.6 respectively. 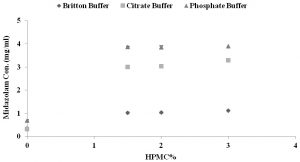 FIG. 2: PHASE-SOLUBILITY PROFILE OF MIDAZOLAM WITH DIFFERENT % OF HPMC IN DIFFERENT BUFFERS

PEG 400 and P.G were mixed with phosphate buffer in different amounts. As it is shown in Fig. 3, the solubilizing enhancement was significant in presence of 0.3 and 0.4 mole fractions of P.G and PEG400. In 0.1 and 0.2 mole fraction the solubility was less comparing phosphate buffer alone. Solubility and solubilization power are reported in Table 5. 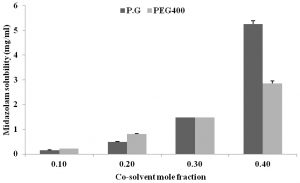 FIG. 3: MIDAZOLAM SOLUBILITY IN PRESENCE OF DIFFERENT CONCENTRATIONS OF P.G AND PEG400.

Fig. 4, displays the logarithmic relationship between total midazolam solubility in a binary co-solvent and the volume fraction of each co-solvent system. For all P.G and PEG400 based co-solvent systems, a good correlation (r2= 0.9991 and r2= 0.9608) between fand log Smix were obtained. 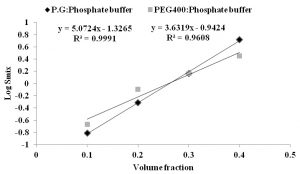 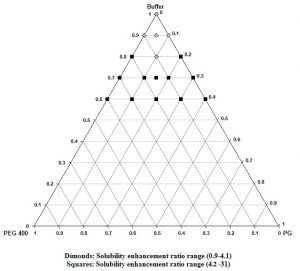 Discussion: Midazolam is 2, 3-dihydro-1H-1, 4-benzodiazepine which exhibits anticonvulsant, anxiolytic, muscle relaxant and sedative properties 4, 20. It’s important usage is in the treatment of status epilepticus. Midazolam is usually administered intravenously which leads to minimal patient compliance 2, 21. Since midazolam has short half-life and delay of action, it is commonly employed in children pre-anesthesia 4. It is generally used sublingually and orally by dose of 0.2 mg/kg and 0.4 mg/kg, respectively. However, in oral administration midazolam undergoes extensive first pass metabolism in the liver (bioavailability of 15-27% in children) 21 -and also its strong bitterness may be repulsive for children 4. Rectal administration of midazolam is currently the only out-of-hospital treatment that has been evaluated for efficacy in seizures in dogs 22.

Midazolam is a hydrophobic drug at neutral and physiological pH having a weak solubility in water and may increase to 10.3mg/ml in pH 3.3, at 25⁰C 3, 4. The aqueous solubility of midazolam is a function of both the ionization of the drug molecule and the ring-opening of the diazepine ring. The ring-opening of the benzodiazepine ring is pH-dependent and fully reversible 9, 23. Midazolam low aqueous solubility is a problem in formulations design. For pharmaceutical applications, acid buffer such as citric acid/sodium citrate can be added to improve midazolam solubility in aqueous oral solution 4.

In this study, at first different waters and buffers were evaluated for their solubility enhancement effects. Due to ionic interactions between the drug and the buffer species in the microenvironment at the solid–liquid interface; and also self-buffering capacity of the dissolved drug in the microenvironment 10 the dissolution rate of a sparingly soluble drug is affected by buffered aqueous medium . As it is reported in results section, the solubility enhancement order was citrate buffer ≈ Britton- Robinson buffer < phosphate buffer. It seems that phosphate buffer was the most effective buffer for midazolam solubility improvement which is consistent with previous studies 24.

β-CDs consist of seven (α-1,4)-linked α-D-glucopyranose units. Cone-shaped CD molecules with hydrophilic outer surface and hydrophobic central cavity can take up a whole drug molecule, or more frequently some hydrophobic part of it, into the hydrophobic cavity and are capable of forming inclusion complexes with many drugs. So, the complexation will affect many of the physicochemical properties of the drugs such as solubility 25. It has been reported that cyclodextrins can also solubilize drugs via non-inclusion mechanisms, such as self-association and the formation of micelle-like structures in addition to inclusion complexation26-28. However, it has been reported that cyclodextrin complexation in the best conditions, will result in over four-fold increase in the formulation bulk of solid dosage  forms 19.

Fig. 1 shows that the presence of 1.5% of β-CD (1:1 midazolam: β-CD) led to appropriate enhancement effect in solubility. The higher concentrations of β-CD did not significantly affect the solubility of midazolam which can be related to limited solubility of β-CD 29. The most common type of cyclodextrin complexes is the 1:1 drug:cyclodextrincomplex (D:CD) where one drug molecule (D) forms a complex with one cyclodextrin molecule (CD). Since the value of K1:1 is most often between 50 and 2000 M-119 it seems that K1:1 values for different buffers was in the acceptable range and the formed Midazolam-β-CD complex is stable.

Hyroxypropylmethyl cellulose (HPMC) is a nonionic cellulose derivative with hydrogen bonding potential and stabilizing ability to prevent crystallization of amorphous material 30. Previous studies showed increased drug solubility in phosphate buffer solution (pH 6.8) in presence of 1% water soluble polymers such as HPMC. Furthermore, it was reported HPMC inhibitory effect on the precipitation of drug from supersaturated solutions 31. Our results indicated that midazolam solubility enhancement ratio was 6.1, 18.2 and 22.7 for Britton- Robinson, citrate and phosphate buffer in presence of HPMC. There was no significant different (p>0.05) in solubility of midazolam with increasing HPMC concentration.

Co-solvency -use of co-solvent- is one of the most popular and highly effective techniques for solubility improvement of poorly soluble drugs in pharmaceutical liquid formulations. Co-solvents are miscible solvents mixtures, which can vividly increase the solubility of poorly aqueous soluble drugs when added to water. Co-solvents reduce the ability of nonpolar solutes squeezing in aqueous system by small nonpolar hydrocarbon region. They can reduce the interfacial tension between the aqueous solutions and disrupt waters self-association and reduce hydrophobic solute squeeze out. The most frequently used low toxic and due to their cilio-friendlyco-solvents for nasal use are propylene glycol, glycerin, polyethylene glycol (PEG), etc 16, 32, 33.

As it is showed in Table 5 and Fig. 5, increasing P.G and PEG400% caused concurrent reducing in dielectric constant value in system, which leads to midazolam solubility improvement. The supplementary explanation for this phenomenon is related to increasing the enthalpy and entropy of the system due to low water hydrophobic effect in presence of <20% P.G as co-solvent. The co-solvent like “icebergs”, disorder the water-water hydrogen bonds around the nonpolar groups of the drug, while increasing co-solvent concentration higher than 30% leads to better drug solvation and solubility 35. The solubilization power (Φ) in co-solvent systems is a quantitative estimation for the stronger solvent to improve the drug solubility. The solubilization power is correlated to co-solvent polarity; it means that the greater the power of solubilization in a given mixed solvent system, the greater the difference in polarity or octanol-water partition coefficient of the two solvents 32.

ACKNOWLEDGEMENTS: The authors would like to thank the council of research at international branch of Shiraz University of medical sciences for financial support.

CONFLICT OF INTERESTS: The Authors declare that there is no conflict of interest.