ABSTRACT: Leclercia adecarboxylata is a gram-negative bacillus. L. adecarboxylata has been isolated from various environments, such as food and water, and clinical specimens from patients with various diseases and ailments, such as pyelonephritis and sepsis. Although L. adecarboxylata infections are generally treated with β-lactam antibiotics, the emergence of multidrug-resistant strains reported in recent years has presented a major challenge in the clinical treatment of the infections. Thus, I searched for potential candidate compounds for developing new antibiotics that are effective against multidrug-resistant L. adecarboxylata. In a docking simulation performed to extract an inhibitor of the molecular chaperone GroEL, mizoribine was identified as a “hit.”Notably, when L. adecarboxylata was cultured in a mizoribine-containing medium, its growth was inhibited at mizoribine concentrations of ≥0.63 mmol/L. considering these findings, I propose that mizoribine could serve as an effective new therapeutic agent for L. adecarboxylata infection. In the future, it will be necessary to investigate the effects of mizoribine on other bacterial species.

Docking Simulation: The docking software SeeSAR10 (BioSolvel T, Nordrhein-Westfalen, Germany) was used to extract compounds that could potentially bind to GroEL. Because the three-dimensional structure of GroEL produced by L. adecarboxylata was not available, Escherichia coli GroEL's structure is 96.28% identical in amino acid sequence to GroEL from L. adecarboxylata, was downloaded from the Protein Data Bank and used for the docking simulation. The ADP binding site of E. coli GroEL was used for the compound binding site. A database (1,000,000 compounds) owned by Namiki Shoji (Tokyo, Japan) was used as the compound database. 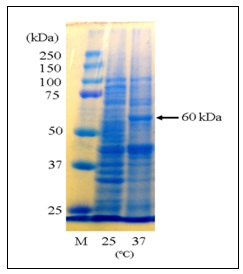 Profiles Note: Leclercia adecarboxylata NBRC102595 was cultured under aerobic conditions in modified cyclodextrin broth and grown for 3 days at 25°C or 37°C; subsequently, proteins extracted from the bacterial cultures were separated using SDS-PAGE and stained with Coomassie Brilliant Blue. These results imply that GroEL expression is also up-regulated when L. adecarboxylata is transmitted from the environment into the human body. GroEL is a molecular chaperone that functions in protein folding 10, and thus GroEL production could be increased because the temperature rise might disrupt the three-dimensional structure of proteins and enhance the demand for chaperone-dependent folding. Furthermore, because GroEL is also involved in bacterial aggregation, 11 detection of the temperature rise could enhance GroEL production and promote the aggregation of L. adecarboxylata. Therefore, biofilm formation at 37°C and 25°C was compared. A significantly higher amount of biofilm was formed in L. adecarboxylata cultures at 37°C than in cultures at 25°C Fig. 2. Biofilm formation occurs when the bacteria attaches, and aggregates at the site of infection 12. These findings indicate that GroEL significantly contributes to L. adecarboxylata biofilm formation. 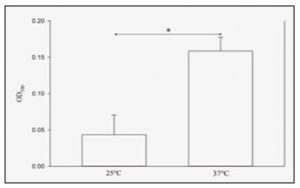 Amounts of leclercia adecarboxylata Biofilm Formation Note: Leclercia adecarboxylata NBRC102595 was cultured in modified cyclodextrin broth in 96-well plates and after incubation at 25℃ or 37℃ for 48 h, biofilm formation was quantified based on the optical density measured at 590 nm. Data are presented as means ± standard deviation (n = 5); *P< 0.05 (Student’s t test): significant difference in biofilm formation at the two temperatures.

Additionally, this study revealed that mizoribine, which was identified as a GroEL-targeting drug candidate through in-silico screening, shows anti-L. adecarboxylata activity. To search for new anti-L. adecarboxylata drugs, GroEL was used as the target protein in docking simulations for identifying binding molecules.

In simulations performed using the three-dimensional structure of E. coli GroEL, which shares >96% sequence identity with L. adecarboxylata GroEL, mizoribine was extracted as a potential GroEL-binding compound Fig. 3. Notably, the growth of L. adecarboxylata was significantly suppressed when mizoribine was added to cultures at concentrations of ≥0.63 mmol/L Fig. 4. 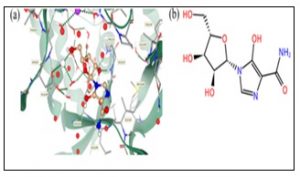 FIG 3: IN-SILICO SCREENING OF ANTI-GROEL AGENT. Note: Docking of mizoribine to E. coli GroEL in the predicted binding site by using docking software SeeSAR 10 (a). Structure of mizoribine (b). 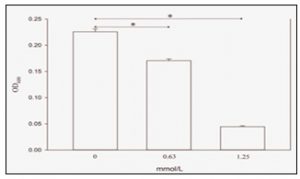 FIG 4: ANTI-LECLERCIA ADECARBOXYLATA EFFECT OF MIZORIBINE. Note: Leclercia adecarboxylata NBRC102595 was cultured in 96-well plates for 24 h at 37℃ in modified cyclodextrin broth lacking or containing mizoribine at 0.63 and 1.25 mmol/L; subsequently, bacterial proliferation in the cultures was quantified based on the optical density measured at 600 nm. Data are presented as means ± standard deviation (n = 3); *P< 0.05 (Dunnett’s test): significant difference in bacterial growth between mizoribine-supplemented and non-mizoribine-supplemented media.

Because mizoribine does not harbor a β-lactam ring, the drug is likely effective against ESBL, MBL, and carbapenemase-producing bacterial strains. Future studies should investigate the effects of mizoribine on other bacterial species and carefully evaluate the drug's effective dosage.

CONCLUSION: In conclusion, GroELis considered to play a critical role in the survival of L. adecarboxylata under high-temperature conditions similar to those in the human body, as well as in L. adecarboxylata accumulation and colonization at infection sites. Notably, this study revealed that mizoribine, identified as a potential GroEL-targeting drug, exhibits anti-L. adecarboxylata activity.

ACKNOWLEDGEMENT: I would like to thank edit age (www.editage.com) for English language editing.

CONFLICTS OF INTEREST: No conflicts of interest declared.