ABSTRACT: In the present work, efforts have been made to model the antibacterial activity of 4-thiazolidone derivatives against pathogenic bacteria P. aeruginosa by using QSAR (quantitative structure-activity relationship) methodology. Multivariate analysis gave excellent model which was tested using cross validation using leave one out method. The cross- validation method was applied to the data set in order to prove the predictive power of statistically significant QSAR models, which help to explore some expectedly potent compounds. The best model predicting the antibacterial activity indicated that the 2D auto-correlation, 3D and WHIM parameters such as MATS8p, RDF070u, RDF035e, Mor30v (3D) and E1u (WHIM Parameter) are very effective in describing the antibacterial activities of these compounds. The study revealed that E1u, MATS8p, RDF035e and RDF070u contribute positively whereas contribution of Mor30v contributes negatively to the antibacterial activity. The compounds with improved antibacterial potential can be successfully designed with selected quantitative structure activity relationship model.

INTRODUCTION: Heterocyclic compounds like thiazolidones, are very good antibacterial drugs. Thiazolidones and their derivatives are known to have antimicrobial, antiviral, antitumor, antihypertensive and anti-inflammatory properties 1-2. However, Searching of more potent and efficient antibacterial agents is one of the major tasks of clinical practice due to the antibiotic resistant strains. Quantitative structure activity relationship (QSAR) analysis has been found to be a good tool for prediction of biological activity of novel compounds including antibacterial and antiviral agents 3-7.

Computer technologies based on model development provide good insight for modification of molecular structures to get new organic molecules giving useful properties (including antibacterial activity). The present work is focused on the modeling of antibacterial activity of 4-thiazolidone derivatives.

MATERIALS AND METHODS: QSAR has been widely used for years to provide a quantitative correlation between chemical structure and biological activity 8. Agrawal and coworkers have used many physicochemical and topological parameters to predict the antibacterial activity of many compounds 9-12.

In the present study, 25 thiazolidone derivatives have been considered having biological activity in terms of its log values. The compounds are taken from the literature 13.

Dragon 6 software is used for the calculation of descriptors. The structural details of the compounds used in the present study are given in Table 1. The clinical isolates of the pathogenic bacteria P. aeruginosa has been used as the test microorganisms.

TABLE 1: STRUCTURES OF COMPOUNDS USED IN THE PRESENT STUDY 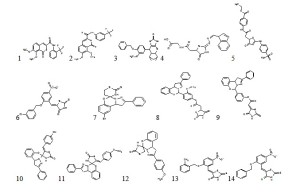 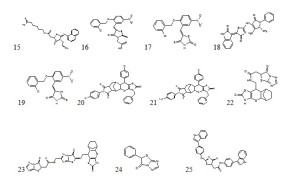 The calculated descriptors from Dragon software are reported in Table 2. Useful descriptors were selected by variable selection procedure and multiple regression analysis was performed using NCSS software 14. The models obtained were subjected to cross validation by leave one out procedure 15. The parameters which have been calculated for modeling are:

TABLE 2: CALCULATED VALUES OF PARAMETERS ALONG WITH THEIR BIOLOGICAL ACTIVITY

The following weighting schemes are used for computing the weighted covariance matrix, Sw:

Let n be the number of atoms in the molecule. For any chosen value for lag d and any chosen weight w, we compute the Autocorrelation Descriptors using the following formulae.

Where, wi and wj are the weights of the atoms i and j, , and δij is Kronecker delta, that is,  δij =1  if the ijth entry in the Topological Level Matrix is = d, and  δij = 0 otherwise.

Where, f is a scaling factor, rij is the Euclidean distance between the atoms i and j, wi and wj  are the weights of the atoms i and j  respectively, n is the total number of atoms, β is the smoothing parameter which defines the probability distribution of the individual inter-atomic distance. β can be interpreted as the temperature factor that defines the movement of the atoms.

The MoRSE descriptor is defined as follows:

RESULTS AND DISCUSSION: The parameters calculated have been summarized in Table 2 which includes MATS8p, RDF070u, RDF035e, Mor30v and E1u. A correlation matrix has been obtained which shows correlation among the selected parameters and activity and is reported in Table 3. This table reveals that E1u is the only parameter which may be useful in one-parametric modeling. However, the combination of different parameters may result better models. The data was subjected to regression analysis and many statistically significant models have been obtained which are summarized in Table 4.

Here some statistically significant models having R2 more than 0.7 have been discussed.

Three variable model: When Mor30v and RDFo35e is added with Elu a three parametric model is resulted with R2 = 0.7488. The adjusted R2A (0.7129) for this model also shows significant improvement. The model is as below:

Addition of RDF070u to above model yielded a four parametric model with better statistics. The R2 value changes from 0.7488 to 0.8292 and R2A change from 0.7129 to 0.7951. Change in adjusted R2 clearly indicates that the added parameter has its fair share in the model. The model is as below:

No higher order model is permitted as Rule of Thumb restricts that (No of compounds are 25 hence maximum permitted no of parameters is 5.) Therefore, the five parametric model is the best model for modeling the anti-bacterial activity (log BA) of compounds used in the present study. Further confirmation is obtained by plotting observed activity against estimated activity and such a comparison is demonstrated in figure 1. The predictive power of the model comes out to be 0.8981. The biological activity (log BA) of all the compounds have been estimated using model- 9 (Table 5). The estimated log BA values are in good agreement with the observed values showing that the proposed model is best suited for estimating log BA values of present set of compounds.

To validate the model cross validation parameters have been calculated and they are reported in Table 6. We know that PRESS is a good estimate of the real predictive power of the model. If this value is smaller than SSY, the model predicts better than chance and can be considered statistically significant. Table 6 shows that all the proposed models are better than chance and are statistically significant. The ratio PRESS ⁄ SSY can be used to calculate the approximate confidence interval of the prediction of new compounds. If this ratio should be smaller than 0.4 the model is reasonably good. In the proposed model, this ratio is smaller than 0.4 and therefore, the model-9 has excellent predictive power. 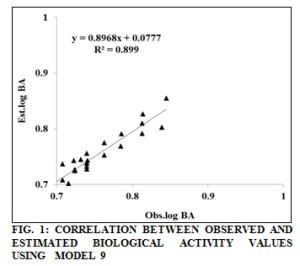 The developed models are cross-validated by leave-one-out method. Another cross-validated parameter related to uncertainty of prediction, the PSE, has also been calculated. The lowest value of PSE for model 9 supports its highest predictive potential (power).

The low value of PSE and SPRESS and high value of R2CV suggest that the five-parametric model is most appropriate in predicting the log BA values of present set of compounds.

There is no colinearity among the used parameters which has been established by ridge analysis as well as various inflation factors calculated from the model 9 (Table 7, figures 2 and 3). 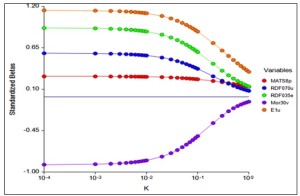 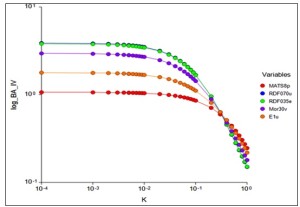 CONCLUSIONS: On the basis of above discussion following conclusions can be drawn.