ABSTRACT: DHFR being involved in many important cell processes, its inhibition has long been an attractive goal for the development of chemotherapeutic agents. In present work, efforts have been made to model the DHFR inhibitory activity of a series of 4,6-diamino-2,2-dimethyl-1,2-dihydro-1,3,5-triazine derivatives to identify the structural requirements for the binding affinity between the receptor and Triazine derivatives. Quantum chemical properties like electron density on specific atoms, net charge on specific atom, binding energy, HOMO, LUMO etc. were used for various structural activity relationship investigations for a series of derivatives of Baker’s triazine for proposals of new compounds which might be useful for the development of effective drugs. The parameters were calculated by optimizing the molecule using MM+ force field. To develop the model with significant statistics and predicting ability, quantum chemical computations were made by using step-wise regression analysis and validated by various cross-validation parameters. The results were discussed on the basis of maximum R2 value which indicates that penta-parametric model is the most significant model for the activity

INTRODUCTION: Dihydrofolate reductase (DHFR) catalyzes the reduction of folate or 7, 8−dihydrofolate to tetrahydrofolate and intimately couples with thymidylate synthase (TS). TS is a crucial enzyme that catalyzes the reductive methylation of deoxyuridine monophosphate (dUMP) to deoxythymidine monophosphate (dTMP) utilizing N5, N10-methylenetetrahydrofolate as a cofactor, which functions as the source of the methyl group as well as the reductant.1 This is the exclusive de novo sources of dTMP, hence inhibition of DHFR or TS activity in the absence of salvage, leads to “thymineless death”.2-3

Thus, DHFR inhibition has long been an attractive goal for the development of chemotherapeutic agents against bacterial and parasitic infections as well as cancer.4-6

One class of compounds that has been identified as a potential DHFR inhibitor is       4,6-Diamino-2,2-dimethyl-1,2-dihydro-1,3,5-triazine, well known as Baker’s triazine.7 The triazines are among the oldest known organic nitrogen-containing heterocycles noted for their therapeutic value as anticancer, anti-malarial, antibacterial and anti-protozoal agents.8, 9  Baker triazines are becoming increasingly important as pharmaceuticals. The extension of studies have explored that 4, 6- diamino-1,3,5-triazines would also possess other forms of pharmacological activities like inhibitory action against various microorganisms, cancer cells and neuronal sodium channels in addition to the antifolate activity.10 Recently, a series of 4,6-diamino-1,2-dihydro-1-aryl-2-(1-adamantyl)- 1,3,5-triazines was patented as potent Toxoplasma gondii dihydrofolate Reductase inhibitors with IC50= 2×10-4M to 9.7×10-8 M .11

Many structure based techniques of drug discovery and development have evolved in the past 20 years during the search of therapeutically useful agents. QSAR is one of the drug design method and leads to discovery of potent drugs.

In the present work, a quantitative structure activity relationship has been performed to develop mathematical relationship between quantum molecular descriptors and antimalarial activity to obtain more information about the structural requirement underlined the inhibition of Plasmodial vivax DHFR enzyme. Quantum molecular properties were used for various structure activity relationship investigations for a series of derivatives of Baker’s triazine for proposals of new compounds which might be useful for development of effective antimalarial drugs against resistant Plasmodial vivax. For QSAR modeling we have used maximum R2 method and followed stepwise regression analysis. To achieve responsible molecular features for DHFR inhibition activity, we used the molecular modeling technique. To model the most potent triazine derivative we optimized the molecules using molecular mechanics method applying MM+ force field.

We noted that the maximum R2 method actually includes a combination of standard error, adjusted R2 value, standard error of estimation and F-ratio value. The predictive ability of the model is discussed on the basis of cross-validation method. The accuracy of a molecular mechanics or quantum mechanical method depends on the database used to parameterize the method.

Quantitative Structure Activity Relationships (QSAR) have been established for a set of 32 analogues of 4, 6-diamino-1,2-dihydro-2,2-dimethyl-1R-s-triazine (Baker’s triazine), potent inhibitor of DHFR enzyme. The DHFR inhibition activity of these compounds analyzed as log 1/C was adopted from the literature and the various substituents selected are as shown in Table 1. The structures of different derivatives of triazine used in present study were drawn using ACD Lab software (Chem Sketch 5.0). Figure 1 shows the parent structure of triazine analogues used in the study.

We have used the quantum chemical approach to identify the structural requirements for the efficient binding between receptor and triazine derivatives used. For this molecular modeling parameters like binding energy, total energy, electron density at different atoms in molecules, net charge on different atoms, HOMO, LUMO, dipole moment, X, Y, Z Co-ordinates etc. have been selected. All the molecular modeling parameters were calculated from the optimized molecules in the minimum energy conformer with the help of computer software Hyperchem 7.0 (demoversion).12 Figure 2 shows optimized structures of compound 9 and 15. Since the calculation methods of these parameters with the software are well documented in the literature, it is not necessary to duplicate the same here.

The molecular parameters having maximum effect on the biological activity were selected by performing correlation studies in –mono, -bi, -tri, -tetra and -penta parametric combinations. The quantum chemical parameters selected for the study are as mentioned in Table 2.

Regression13-15 analyses were made using maximum R2 method (Chaterjee et al, 2000) to propose statistically significant models and identify prediction models adopting step-wise regression. Several combinations of variables were examined to identify combinations of variables with good prediction capabilities. Regression results were further validated with the help of some cross-validation parameters. All the computations were carried out on NCSS statistical software.16

The generated QSAR models were selected on the basis of various statistical parameters such as squared correlation coefficient (R2) which is relative measure of quality of fit; Fischer’s value   which represents F-ratio between the variance of calculated and observed activity; standard error of estimation (Se) representing absolute measure of quality of fit, cross-validation parameters viz. PRESS, SSY, R2a, Pogliani’s Q parameter17-19 etc. to estimate the predictive potential of models.

As mentioned in the introduction in order to carry out quantum computations we have first carried out the molecular geometry optimization to find out the structural behavior of the compounds as a function of attached groups and their positions. To analyze the relationship between binding affinity and the structure of the molecule, various molecular properties of triazine derivatives mentioned in Table 1, we tested a pool of quantum chemical parameters, presented in Table 2. 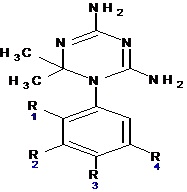 FIG. 1: PARENT STRUCTURE OF TRIAZINE ANALOGUES USED IN THE STUDY

The univariate correlation among the selected parameters in the form of correlation matrix is presented in Table 3, shows that except for binding energy having correlation coefficient 0.6009, none of the other parameters tested in the study have significant correlation with the binding affinity of the triazine derivatives.

All those correlations resulting in the low value of R (< 0.50) are not considered because those were statistically insignificant. The parameters not participating in the developing QSAR models are not listed in Table 2 but discussed in the methodology section.

TABLE 1: SUBSTITUENT AND BIOLOGICAL ACTIVITY OF TRIAZINE DERIVATIVES USED IN THE PRESENT STUDY

For QSAR studies inhibitory activity of triazine derivatives was selected as dependent variable and calculated parameters as independent variables. In any thorough investigation of the effects of molecular properties, it is essential to prove that the results are both statistically valid and make chemical sense. It would be appropriate to obtain insight into the physical meaning of the correlation obtained as an output of the regression analysis. The magnitude of descriptors could be used as guideline to improve the selected activity of molecules.

The best uni-parametric model was obtained with binding energy (BE) is as given below:

Equation 1 signifies that although the value of R is considerable and show dominant effect of BE but, the model has error of estimation much higher than multiple regression coefficient.

TABLE 3: CORRELATION AMONG THE VARIABLES SELECTED FOR THE STUDY

From various bi-parametric combinations tried a very few gave the statistically significant results and the best result was obtained by the combination of BE with electron density on nitrogen atom at 5th position (ED N5). The model obtained was:

Equation 3 signifies that although the statistical improvement is marginal but the combination of BE and ED N5 plays the important role and favors binding affinity of the molecules. The model was good in terms of statistics but not as much as required for describing the structure activity relationship in quantitative manner. So, we tried for tri-parametric model including BE, ED N5 and ED C15. The model so obtained is-

For the further improvement in predictive potential and modeling efficiency, we tried for tetra and pent- parametric models. The models developed are:

Equation 4 demonstrates that high net charge on carbon atom at 16th position has unfavorable effect for the inhibition of DHFR by triazine derivatives. The improvement in regression coefficient (R), R2a and Q supports Model-4 for the prediction of the activity.

To confirm our findings, we estimated the log 1/C values from the above models and compared them with the observed values of biological activity. The residual values showed that compound number 31 as outlier for the modeling. The model obtained after deletion of this compound from the series resulted unto much improved model as represented by Equation 6.

Equation 6 shows significant increase in R2 and R2a values from 0.7675 to 0.8305 & 0.7228 to 0.7966 respectively. This increase in values simply indicates that the deleted compound has the unfair share in modeling of the activity and confirms the exceptional behavior from their parent series. The value of R2a will decrease if the deletion of compounds does not reduce the unexplained variation in the model enough to offset the loss degree of freedom.

The indication of the performance of model is obtained from R2cv.  In our case, the highest R2cv is found for the Model-6 indicating it has excellent predicting power with value 0.7959. Figure 3 shows the graph of correlation between observed and estimated biological activity according to Model-6

FIG. 2: OPTIMIZED STRUCTURES OF COMPOUND 9 AND 15 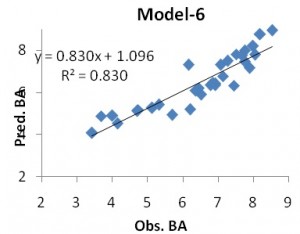 FIG. 3: GRAPH BETWEEN OBSERVED AND ESTIMATED BA FOR MODEL-6

CONCLUSION: From the results and discussions made above, we conclude that quantum chemical parameters can be used successfully for modeling the inhibition activities of DHFR by triazine derivatives. The results obtained express the

unfavorable effect of presence of high electron density at carbon atom on 15th position and the presence of high net charge on carbon at 16th position for the inhibition of DHFR by selected triazine derivatives. The comparison of all the models obtained exhibit the dominant and significant role of electron density at nitrogen at the 5th position in the molecule over the carbon atoms at 15th and 16th positions. The results also indicate that molecular (3D) modeling can be used for the understanding of structural behavior and selecting the compounds with potential activity.

ACKNOWLEDGMENT: We greatly acknowledge support from National Institute for Technical Teachers Training and Research, Bhopal. We also acknowledge late Dr. P.V. Khadikar sir for sharing his knowledge and constant motivation for this research.