INTRODUCTION: Oral drug delivery is the most desirable route for the drug administration. Whenever systemic effects are indented but oral bioavailability of some compounds has promoted the search of more effective route for the systemic delivery. Transmucosal route of drug delivery (i.e. the mucosal lining of the nasal, rectal, vaginal, ocular, oral cavity) peroral administration for systemic administration, nasal mucosa is the major route of administration to achieve faster and higher level of drug absorption. In recent years many drugs have been shown to achieve better systemic bioavailability through nasal route, this is due to the large surface area, porous endothelial membrane, high total blood flow, the avoidance of first-pass metabolism and readily accessibility.

Anatomy and physiology of Nose 4-8: The human nasal cavity has a total volume of about 16 to 19 ml and total surface area of about 180cm2. It is divided into two nasal cavities via the septum. Some of the regions are described as follows.

The Vestibular region: It is located at the opening of nasal passages and is responsible for filtering out the air borne particles. It is considered to be the least important of the three regions with regards to drug absorption. 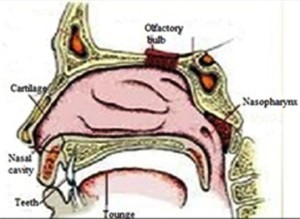 FIG. 1: ANATOMY AND PHYSIOLOGY OF NOSE

The olfactory region: It is of about 10 cm2 in surface area and it plays a vital role in transportation of drugs to the brain and the CSF. Human olfactory region comprises of thick connective tissue lamina propria, upon which rests the olfactory epithelium. Lamina propria has axons, bowans bundle and blood vessels whereas epithelium consists of three different cells i.e. basal cells, supporting cells and olfactory receptor cells etc. Neurons are interspersed between supporting cells. The olfactory receptor cells are bipolar neurons with a single dendritic and extending from the cell body to the free apical surface where it ends in an olfactory knob carrying non-motile cilia, which extend above the epithelium.

The epithelium of the nasal passage is covered by a mucus layer, which entraps particles. The mucus layer is cleared from the nasal cavity by cilia and is renewed every 10 to 15 minutes the pH of the mucosal secretions ranges from 5.5 to 6.5 in adults. Numerous enzymes for instance, Cytochrome P-450, Carboxylesterases and Glutathione S-transferase are present in nasal cavity. 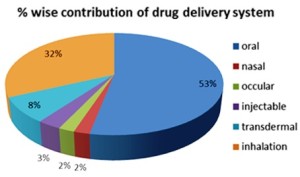 As per the information of percentage wise distribution of drug delivery systems, it is revealed that the major contribution of oral (58%) drug delivery than that of inhalation (38%) than transdermal (8%), Injectable (3%), ocular (2%) and finally nasal (2%). Nasal routes contribute only by 2% in drug delivery which also gives new hopes for researchers to work in this field. New researcher can step in this field and can bring new nasal formulation with greater bioavailability and less toxic effect.

b)      Factors related to Formulation:

The level of amino-peptidase present is much lower than that in the gastrointestinal tract. Peptides may also form complexes with immunoglobulin (Igs) in the nasal cavity leading to an increase in the molecular weight and a reduction of permeability.

How to overcome these factors???

Methods to improve Nasal Absorption 14-18: Followings are some approaches which have been used successfully for the improvement of nasal drug absorption.

Formulation and Active agents that have been utilized in Nasal Drug Delivery 19-21:

TABLE 1: FORMULATION AND ACTIVE AGENT THAT HAVE BEEN UTILIZED IN NASAL DRUG DELIVERY

ACKNOWLEDGEMENT: Authors are highly thankful to Dr. S.S. Khadabadi, Principal, Government College of Pharmacy, Aurangabad, for providing all necessary support and guidance at every hours of work.