INTRODUCTION: Streptococcus mutans has emerged as one of the most significant caries causing organism 10, 3, 1, 18. Mostly researches are related with Streptococcus mutans etiology, epidemiology, transmission of caries and many molecular biological studies which require its easy and quick isolation.

For this purpose several selective media have been developed. Among all the media MSB( Mitis salivarius bacitracin) was the first widely accepted medium 5 but it has several disadvantages like sometimes it is tough to differentiate visually between S. mutans and non- S. mutans colonies and serotype a of Streptococcus mutans is failed to grow on MSB 4, 15, 8.

Kimmel & Tinaoff 1991 7 and Llena et al 2007 9 modified MSB and gave the names MSKB and MSBTPF respectively.  MSKB was supplemented Mitis salivarius agar with kanamycin sulfate, sorbitol, potesium tellurite & bacitracin and MSBTPF by adding 5% potassium tellurite and 64 µg/ml fluconazol, but result of this MSKSB is not satisfactory as selectivity of this media for is Streptococcus mutans very less but MSBTPF‘s results were relatively better. There are many media which were prepared to overcome the shortcomings of MSB medium. Such as tryptone-yeast extract- cysteine with sucrose and bacitracin (TYCSB) 19, 20, 21, 22 trypticase soy with sucrose and bacitracin (TSY 20B) [14], MM 10 4, Mannitol containing broth 2, glucose-sucrose-tellurite-bacitracin (GSTB) 17.

Wade et al 1986 21 proved best recovery of S. mutans with a final sucrose concentration of 20% and bacitracin 2 units /ml. Sucrose is added before autoclaving the media and bacitracin is added after sterilization.

The aim of the present study was to compare the growth ability of S. mutans on five media including new modified medium named as Thioglycolate sucrose blood bacitarcin agar (TSBB) which was isolated from clinical samples along with two reference strains.

The standard strain of S. mutans which was used in this study was ATCC 25175. It was stored in -70°C, thawed and sub-cultured onto Thioglycolate agar. As this is anaerobic medium there was no need to give anaerobic condition. Gram staining and biochemical tests were done to confirm the purity of the culture. Further bacterial strain was grown on same above mentioned medium Thioglycolate agar in candle jar.

The dental plaque sample were collected from all surfaces of the teeth and tongue by sterilized cotton swabs. 10 samples were collected from 10 caries active school going children. Each sample was placed in test tubes containing fluid thioglycolate medium and stores at 4oC till plated.

TYCSB, TSY 20B, MM 10, GSTB were prepared according to manufacturer’s and developer’s instructions.

Mutans sanguis agar (Hi Media) was used in this study as reference medium, which was autoclaved and dispersed in sterile petri plate. In an effort to improve the selectivity and accuracy of the isolation of Streptococcus mutans we have formulated an enriched and selective medium TSBB which contains - Thioglycolate agar which consists of Trypticase soy agar 4g, Yeast extracts 1g, Thioglycolate 3g, Sucrose 20g, D/W 100ml.

After the medium was autoclave at 121°C, 15 lbs pressure for 15 mins, cool it at 55°C. Add two disk of bacitracin (each contains 10 U) for at least 15 mins, so that antibiotic get suspends in the medium. For maintaining temperature of medium at 55°C, it was kept in water bath and then 2 ml of blood was added to it.

Dilution and inoculation of reference strains ATCC 25175 and OMZ 61:

Colonies of reference strains were pelleted by centrifugation (10,000 rpm for 20 minutes) and then re-suspended in sterile PBS. These inocula were disaggregated by sonication bath for 3 min for 40 kHz. Bacteria were finally suspended in PBS to make a suspension equal to a 0.5 McFarland standard (1.2 × 108 CFU/ml). It was then further diluted from 1:10 to 1:107. 0.1 ml portion of each dilution were plated on different media by spread plate method. Plates were incubated for 48 hours at 37o C in candle jar.

Dilutions and inoculation of Streptococcus mutans isolated from clinical samples:

The samples were homogenized by vortexing for 5 minutes, 1 ml samples were diluted from 1:10 to 1:10 6. After dilution, 0.1 ml portion of appropriate dilution was plated by using a bent glass rod on different agar media (triplets of every medium). After incubation of 48 hr suspected colonies were isolated and identified by using following tests – Gram staining, Catalase test, Esculine hydrolysis test, sugars (mannitol, sorbitol, melibiose and inulin) fermentation test.

Each medium was inoculated by 0.1 ml of each dilution of reference strain of Streptococcus mutans and10 -5 and 10 -6 dilution of each clinical sample. The colonies on plates were enumerated by colony counter.

A total of 10 caries material were taken from low socioeconomic caries active school active children. All the children were of 5-6 years. Every sample and reference strain of Streptococcus mutans were plated on all the media. Growths on agar plates were monitored by counting the colony forming unit (CFU) after incubation period of 48 hours.

Recovery and enumeration of Streptococcus mutans from clinical samples:

Recovery of Streptococcus mutans on different media from diluted dental plaque samples obtained presented on Fig. 1. The S. mutans was recovered from all the five media. The best recovery was in TSBB (87%) medium which was almost similar with TYCSB (81.5%), followed by TSY20 (68%) GSTB (60%). MM10 (29%) showed the minimum recovery. 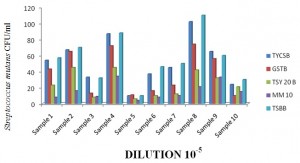 FIG.1: ENUMERATION OF STREPTOCOCCUS MUTANS FROM 10 CARIES ACTIVE CHILDREN IN 10-5 DILUTION. (MEAN NUMBER OF COLONIES ON THREE PLATED OF EACH MEDIUM).

Relative growth index (RGI) which was calculated for evaluating the selectivity of media.

It was observed that moderate growth of Streptococcus mitis, and Streptococcus salivarius in the, TSY 20B, MM 10, GSTB media (RGI < 10%) and in TSBB (RGI < 5%) in relation to control medium. Recovery of Streptococcus sobrinus in TYCSB was high (RGI > 35%). While Staphylococcus aureus, Lactobacillus, Actinomycetes were inhibited (RGI < .05) in TSY20B, MM10 and GSTB media. RGI was less than 0.001% in TYCSB and TSBB.

Recovery and enumeration of Reference strain of Streptococcus mutans:

Efficacy of different media for Reference strain ATCC 25175 and OMZ 61 were observed by calculating CFU /ml. Strains were enumerated on different dilutions range 1:10 to 1:107, shown in Fig. 2.

Both the reference strains revealed higher in number in TSBB agar and TYCSB as compared to other media. The average recovery rate of standard strains on above mention dilutions are describe in Fig. 3 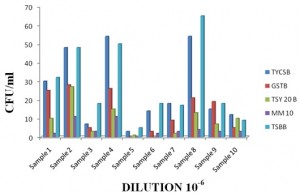 FIG. 2: ENUMERATION OF STREPTOCOCCUS MUTANS FROM 10 CARIES ACTIVE CHILDREN IN 10-6 DILUTION. (MEAN NUMBER OF COLONIES ON THREE PLATED OF EACH MEDIUM). 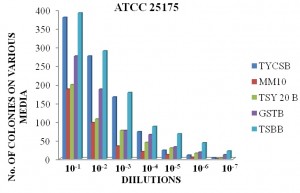 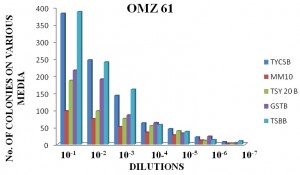 One more advantage of TSBB medium is easy identifiable colonies of Streptococcus mutans. After the incubation period of 48 – 72 hours, colonies were examined, because medium was containing both, blood and sucrose and because of its presence most strainsof S. mutans produced colonies of 1 mm in diameter with beads, droplets or puddles (dew drop like colonies) containing soluble extracellular polysaccharide (Hardie 1986) with α and γ  (Fig. 5) 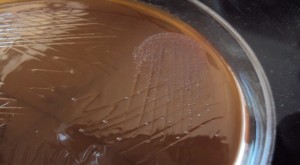 FIG. 5: SHOWING COLONIES OF 1MM IN DIAMETER, WITH BEADS, DROPLETS OR PUDDLES WITH γ HEMOLYTIC ON MODIFIED THIOGLYCOLATE AGAR.

DISCUSSION: This study intended to compare the sensitivity and selectivity of different culture media to isolate and identify Streptococcus mutans in caries active children and from reference strains.

Streptococcus mutans was grown on all the above mention media, but percentage of recovery was different. In the present study TSBB proved to be the best medium among the all with its recovery rate of 87%, followed by TYCSB (81.5%) from clinical samples.

These results may vary if compared to different studies. For examples, Wade et al 1986 21 showed highest recovery on GSTB (64%), followed by TYCSB (60%). Wan et al 2000 22 proved TYCSB is best medium with its recovery rate of 50± 7% for NCTC 10449 and 82 % from clinical samples. Hidebrandt & Bretz 2006 6 also showed TYCSB as a better medium than MSB. Momeni et al 2014 11 observed no significant difference in S.mutans counting on all 5 bacitracin containing (MSB, MSKB, GTSB, TYS20B, and TYCSB) but allowed for more non-S.mutans.

After observing almost all the aspects of TSBB (modified media) we can conclude that this modified media was found to be more appropriate and favorable for the growth Streptococcus mutans in comparison to other existing media.

ACKNOWLEDGMENT: The authors are indebted of Department of Microbiology, Barkatullah University, Bhopal and People’s College of Medical Science, Bhopal for providing laboratory facilities.

CONFLICT OF INTERESTT: There are nonfinancial competing interests (political, personal, religious, ideological, academic, intellectual, commercial, or any other) to declare in relation to this manuscript.