MODULATION OF mTOR RECEPTOR IN DIABETIC NEPHROPATHY BY SANTALIN A OF LAL CHANDAN (PTEROCARPUS SANTALINUS): AN IN-SILICO ASSESSMENT BY MOLECULAR DOCKING

MODULATION OF mTOR RECEPTOR IN DIABETIC NEPHROPATHY BY SANTALIN A OF LAL CHANDAN (PTEROCARPUS SANTALINUS): AN IN-SILICO ASSESSMENT BY MOLECULAR DOCKING

ABSTRACT: Background: Diabetic nephropathy (DN) is a primary cause of end-stage renal disease globally. Activation of mTOR and reduced autophagy has been identified as one of the pathogenic pathways. The presently available drugs have been successful in inhibiting the mTOR signaling, but show low oral bioavailability and suboptimal solubility. Rapamycin is a selective inhibitor of mTOR, shown significant protection against DN. However, its continuous use is associated with side effects. Thus, the search for novel drugs is on great demand. In the present study, in-silico approaches have been adopted to identify potential compounds with optimal oral bioavailability and better solubility properties, with no toxic effect. Materials and Method: The receptor protein mTOR with PDB ID: 3FAP was retrieved from the RCSB protein data bank. Total 20 compounds were selected from the list of 113, obtained from LC-MS of Lalchandan. Further, in-silico molecular docking calculation was done by using YASARA software. Drug-likeness and molecular property of best-docked compounds were checked by using Lipinski rule of five and Admet SAR server. Result: Five compounds showed interaction with mTOR protein. Out of these Santalin A showed the best interaction with binding energy 11.453[kcal/mol] and dissociation constant 4025.6841[pM]. Further, the Lipinski drug-likeness and admetSAR results also showed that Santalin A has good optimal oral bioavailability, non-carcinogenic and no toxic effect, suggesting all drug-like properties as compared to standard drug Rapamycin. Conclusion: Santalin-A, can be taken up as a potential lead compound for biological testing for developing a new drug for diabetic nephropathy, acting via mTOR signaling inhibition pathway.

INTRODUCTION: Bark / Heartwood of Pterocarpus santalinus (Family- Fabaceae) (PS) is already in clinical use in the Ayurvedic system of medicine. It is mainly found in Southern India and commonly known as ‘Red Sanders.’

Heartwood of PS has antipyretic, anti-inflammatory, anthelmintic, tonic, dysentery, hemorrhage, aphrodisiac, and diaphoretic activities 1. It is also used in the treatment of diseases like bilious infections, skin diseases, eye diseases, ulcers and diseases related to blood 2, 3, 4.

It mainly contains isoflavone glucosides and antitumor lignans like savinin and calocedrin 1. Drinking of water twice a day in the cup of PS wood is in practice for treating diabetes 4, 8, 9. Ethanol extract of stem-bark has been reported to have anti-hyperglycaemic activity 10. However, its specific role in diabetic nephropathy is not well documented.

There is over-activation of mTOR in the kidney tissue of Diabetic nephropathy (DN). The DN is a progressive kidney disease triggered by demolition to the capillaries in the kidneys' glomeruli. It has two stages: micro-albuminuria and macro-albuminuria, its screening is made by measuring albumin in spot urine. An excess amount of protein/albumin secretion in the urine indicates glomerular damage 11. The mTOR is a serine/threonine (S/T) protein kinase, of PI3K-related kinase family. It had unique sense ability towards nutrients availability, oxygen levels, cellular energy levels and mitogenic signals 12, 13, thus involved in controlling the cells growth, proliferation and metabolism and named as ‘Master switch’ 14, 15. The mTOR is consists of the catalytic subunit of two basically distinct complexes, i.e., mTORC1 and mTORC2. They have different sub-cellular partitions affecting their activation and function 16, 17. There is involvement of mTOR in energy homeostasis by controlling the functioning of metabolic organs (liver, muscle, and adipose tissue). Deregulation of mTOR and its associated proteins leads to metabolic disorders like obesity, diabetes, and cancer 18.

The mTOR inhibitor includes Rapamycin, Temsirolimus, Everolimus, Deforolimus, Echino-mycin, etc. They may be specific or non-specific depending on their association with its intracellular receptor FKBP12 19. Rapamycin is a selective inhibitor of mTOR and has shown significant protection against DN. However, its continuous use is associated with side effects. The Rapamycin reacts with FKBP12, and this Rapamycin-FKBP12 complex directly interacts to the FKBP12-Rapamycin Binding (FRB) domain of mTOR, inhibiting its activity 20. However, being potent, Rapamycin shows low oral bioavailability and suffers solvent solubility concerns. So there is a need for searching the new potential compound for overcoming the drawbacks of Rapamycin for inhibiting mTOR. In the present study, the interaction of different phytochemicals of Lalchandan with mTOR protein has been studied and compared with standard drug Rapamycin.

Retrieval of Protein Structure and Active Site Prediction: Based on the literature survey, it has been reported that mTOR can be used as a prominent receptor for structure-based drug designing. The three-dimensional structure of mTOR protein with PDB ID-3FAP was retrieved from RCSB Protein Data Bank (http://www.rcsb.org). The Protein receptor preparation was performed out by optimizing protein model geometry, removal of ligands and other heteroatoms using the Discovery studio 3.0 21. Further, the protein model was used for the active site prediction using Discovery studio 3.0 and MetaPocket. The meta pocket is a meta approach to improve protein-ligand binding site prediction (http://metapocket.eml.org) 22.

Ligand Selection: Out of screened 113 compounds, obtained through LC-MS (Liquid Chromatography-Mass Spectroscopy) of Pterocarpus santalinus (Lalchandan) only 20 bioactive compounds were selected based on DB (database) difference in ppm. LC-MS of the aqueous extract of the plant was performed at IIT Pawai, Mumbai, India. The 2D structures of selected ligands were retrieved in SDF format by using the PubChem compound database (http://pubchem.ncbi.nlm.nih.gov/). All retrieved compounds were further converted into 3D PDB format using Discovery Studio 3.0. Further, energy minimization and ligand optimization were also carried out using Discovery Studio 3.0. 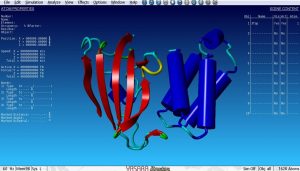 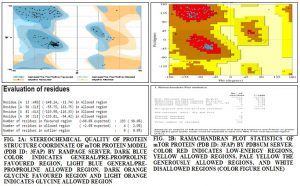 Further, the protein geometry of these phytochemicals was prepared and converted in 3D PDB format using Discovery studio 3.0. After conversion, these phytochemicals were taken for docking calculation. Out of this 20 phyto-chemicals only 5 compounds namely santalin A, santalin B, sitosterol, lupeol, and betulin were selected by binding energy and dissociation constant (described below) Table 1. Structures of these compounds were shown in Fig. 3.

TABLE 2: DRUGLIKENESS AND MOLECULAR PROPERTY PREDICTION FOR BOTH RAPAMYCIN (CID: 5284616) AND SANTALIN A

Two different approaches are presently available: 1. Autodock and 2.VINA. The Autodock is a highly quoted docking program developed at the Scripps Research Institute by Dr. Garrett M. Morris et al. 29. VINA has also been established at the Scripps Research Institute, by different authors, Dr. Oleg Trott and Dr. Arthur J. Olson 30. From the literature survey, it has been found that Rapamycin is the first inhibitor of mTOR protein 31 so in the present study, it has been adopted as a standard drug for docking calculation. In docking calculation, Rapamycin shows similar results as obtained by X-ray diffraction method. In this PDB file, C15- (R)- Methylthienyl Rapamycin (Rapamycin analog) is reported in complex with both human FKBP12 and FRB domain of FRAP 32. 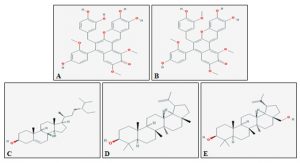 FIG. 3: STRUCTURE OF DIFFERENT PHYTOCHEMICALS FROM PS (A) SANTALIN A, (B) SANTALIN B, (C) SITOSTEROL, (D) LUPEOL AND (E) BETULIN

After docking calculation, the result log files were generated for all 20 selected compounds. The first docked cluster was taken for all selected compounds by binding energy [kcal/mol] and dissociation constant [pM]. Out of 20 selected compounds, it has been observed that only five compounds namely santalin A, santalin B, sitosterol, lupeol, and betulin showed interaction. Out of these Santalin A (CID: 5490179) showed the best interaction with binding energy 11.453 [kcal/mol] and dissociation constant 4025.6841 [pM] with mTOR protein Table 1. After clustering the 25 runs, 15 distinct complex conformations were found for Santalin A. They all differ by at least 5.0 A heavy atom RMSD. Further, the best-docked compound Santalin A was taken for interactive visualization using Discovery studio 3.0. The hydrogen bonding and hydrophobic interaction were shown in Fig. 4a-b.

FIG 4: (A) HYDROGEN BONDING, AND (B) HYDROPHOBICITY, OF SANTALIN A WITH mTOR PROTEIN

The 2D-3D interaction involves the active site amino acid residues TyrA26, PheA36, AspA37, PheA46, ValA55, IleA56, TrpA59, TyrA82, HisA87, IleA90, IleA91, PheA99, LeuB120, SerB124, PheB128, LysB184, ThrB187, TrpB190, AspB191, TyrB193, TyrB194 and PheB197 of mTOR with Santalin A Fig. 5a-b. The residues PheA46, TyrA82 and PheB128, showed Pi-Pi interaction, and the residue IleA56 showed direct interaction with Santalin A. The more positive binding energy of Santalin A as compared to other phytochemicals of PS (Lalchandan) showed strongest interaction with mTOR protein and equivalent interaction with standard drug Rapamycin. From literature survey, it has been found that phytochemical, Santalin A is a red pigment found in PSWE, but its direct interaction and positive binding affinity towards mTOR protein showed that it could be used as a drug for various metabolic syndromes including DN.

The molecular property profile results also indicate positive sign towards human intestinal absorption (HIA) ensuring that the Santalin A passes human intestinal absorption (HIA) models and have no AMES toxic and carcinogenic effects Table 2 33. The comparative analysis showed that Santalin A could be a better drug in comparison to other selected phytochemicals of Lalchandan and standard drug Rapamycin.

Thus, it can be considered a a better inhibitor for mTOR protein in comparison to Rapamycin and other phytochemicals. Thus it could be concluded that Santalin A can be used as a potential lead compound for drug development against different metabolic disorder including Diabetic nephropathy.

CONFLICT OF INTEREST: Authors declare that there is no conflict of interest.