Prakriti Verma1 and A. Nath*2

ABSTRACT: The pharmacological activity of Withenia somnifera commonly called Ashwagandha, a herb having multi-medicinal properties, was investigated   against carbofuran exposed hepatic anomalies in the air breathing fish Clarias batrachus. Fishes were exposed to 1 mg/L carbofuran for three weeks to induce the toxic effects. These fishes were then fed with Withenia somnifera root extract mixed pelleted feed @ 10% of the total feed ingredients for the next 6th and 8th week respectively. The histopathological examination of hepatic tissues was done on light microscopy and transmission electron microscopy. Major changes attributed to the  hepatic cells after carbofuran treatment showed irregular shape of hepatic cells, increased sinusoidal spaces,  rough endoplasmic reticulum, secretary granules, dilated mitochondrial cristae and presence of kupffer cells. Amoeboid nucleus with increased heterochromatin material, granular nucleoplasm and enlargement of nucleolus, were some of the prominent histopathological alteration in the liver tissue after carbofuran toxicity at transmission electron microscope (TEM) level. The histopathological examination of liver cell of carbofuran exposed fish followed by administration of W.somnifera root extract mixed pelleted feed showed marked restoration of hepatic cell towards normalcy, maintaining nearly uniform shape with decrease in vacuolization, sinusoidal spaces and increased granulations. Aggregation of polyribosome, endoplasmic reticulum, mitochondria and Golgi body were distinctly visible in the hepatoplasm. Nucleus with uniform nuclear membrane, nucleolus and increased euchromatin material showed reliable sign of retrieving towards the normalacy. It can be concluded that WSR extracts promote the modulatory activity against carbofuran induced hepatic anomalies in fish

INTRODUCTION: Inappropriate and indiscriminate use of pesticides leads to degradation of aquatic environmental, which in turn harms aquatic biota including fish. The interaction of various chemical pollutants in the aquatic system may be synergistic, antagonistic or additive.

Impact of carbofuran on morphological and behavioral responses at different time intervals in freshwater cat fish, H.fossilis (Bloch.) has been studied 1. Carbaryl, a carbamate pesticide induces perturbations in the level of certain biochemical component, including activities of some enzymes in the blood and liver of the freshwater catfish Clarias batrachus 2. Toxic effect of carbaryl on the gonads of C. batrachus  has also reviewed.3 Carbofuran altered the lipid and free fatty acid level in all the tissue viz. liver, kidney, muscles and ovary of C. batrachus.4 The pesticides also creates atrophy in ovarian cells 5, 6, 7  hepatic cells 8, 9 alteration in phospholipid in female fish.10 Though, various literature have been accomplished regarding the harmful effect of pesticides on different organs of different animals  but very few data are available on the systematic approach to mitigate pesticide impact  by the use of herbal extracts viz. on mammalian systems 11, 12, 13, negligible on fish e.g. in ovarian cell 14, 15 , in testicular cells 16, but yet unverified in hepatic cells of fish. Thus the present paper deals with the possible healing effects of the herbal extracts on hepatic cells of carbofuran exposed C.batrachus.

Test animal selected -The live specimens of Clarias batrachus (60±10) gm. average weight were collected from the wetlands of rural areas of Patna. Test fish were disinfected for 1-2 minutes with 0.01% KMnO4 solution and kept in plastic pool and large Plexiglas aquaria under standard laboratory condition. After 48 hours, fish were fed formulated pelleted feed @ 5% of their body weight. After two weeks of properly acclimatization, fishes were separated into three groups of 12 each. Group A - control (fed with normal feed), Group B- pesticide exposed group.

The 96 hours LC50 value of carbofuran for Clarias batrachus was calculated by standard graphical interpolation method18 as 2.5 mg/l. Then fishes of group –B were exposed to 1 mg/l Carbofuran for 3 week respectively, aquaria water and pesticide solution were changed every day and fishes were fed in   the morning. Every week test fishes were sacrificed; liver tissues were taken out and fixed for ultra structural studies.

In the present investigation medicinal plant used is Withenia somnifera belongs to family Solanaceae. It is an erect herbaceous perennial under shrub and widely distributed in drier parts of    India. The root are stout, fleshy and whitish in colour. The leaves are simple, ovate, glabrous. The flowers are inconspicuous, greenish or lurid-yellow and umbellate cyme. Phyto chemical investigations of roots and leaves have shown the presence of alkaloids, flavinoids and steroidal lactones, which are grouped under a general name” Withanolides” 19. Characterized by ergostane type steroid of C28 basic skeleton having a side chain of C9 units of which six members lactones ring is a characteristic feature, Withaferin A, Withanolides -D, E have  been identified as active Withanolides. Presence of various Amino acids e.g.-Aspartic acid, Glycine, Glutamic acid, Alanine, Proline, Cystine and Tyrosine along with Tryptophan and high content of iron has also reported. Pharmacological studies and medicinal evaluation in different sets of studies revealed vast range of applications of the herb in treatment of physiological disorders20, 21, 22, 23, 24 and anti-oxidative role 25. 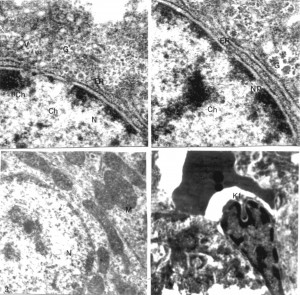 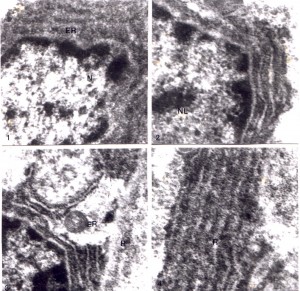 Fig 3: Magnified portion at the side of nucleus showing increased glycogen rosette and degenerated mitochondria.    X46 00 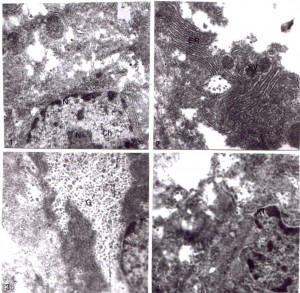 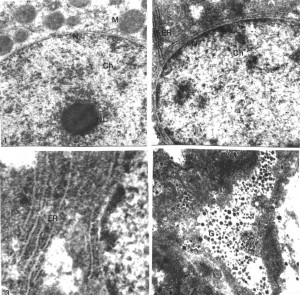 Fig 3: Magnified portion at the side of the nucleus showing rounded and elliptical mitochondria. X46200

DISCUSSION: The present study demonstrates the modulatory activity of WSR extract mixed pelleted feed on pesticide induced liver anomalies on C.batrachus based on ultrastructural study. Liver is a bilobed gland and relatively larger organ, brown or pink in colour as per the physiological condition of the fish. Light microscope studies of the liver cells of the normal Clarias batrachus showed polygonal cells unlike other teleosts. But, no distinct division of the hepatic lobule was observed 27. Hepatocytes bear more or less centrally placed nucleus containing a nucleolus with almost homogenous cytoplasm. Between two neighboring sinusoids, the hepatocytes were arranged as cords. Ramification of portal veins, hepatic artery and biliary duct were also observed in the liver of Clarias batrachus. The hepatic veins and central vein were found randomly throughout the liver. Kupffer cells were not observed in the liver of normal Clarias batrachus. At the transmission electron microscope level, the hepatocyte appears to have endoplasmic reticulum in close connection with mitochondria. Golgi apparatus were present throughout the cytoplasm aggregated into smooth surface vesicles and flattened sac-like structure. Cytoplasm was occupied by glycogen granules in clusters and may be referred to as rosettes. Ribosomes were also observed at the outer periphery of rough endoplasmic reticulum 28.

Marked disruptions in the hepatic cells after the administration of carbofuran 1 mg/l for three weeks showed acellularity and immense infiltration of the cytoplasm with the appearance of large vacuoles. Sinusoids were irregularly arranged between the hepatocytes. Similar observations were also reported in the malathion exposed Channa punctatus 29. Increased rough endoplasmic reticulum, mitochondria and ribosome showed after carbofuran exposure in the present investigation, probably due to increased energy requirement of the cell and also the pathological condition which reflects the process of uncoupling of oxidative phosphorylation 30. Administration of Carbofuran led to formation of large lipid vacuoles, increased sinusoidal spaces and proliferation of glycogen granule into glycogen rosettes. This clearly showed the high rate of protein synthesis responsible for immuno -defensive system 31.

In the present investigation typical interconnection between cisternae of RER indicated that it may facilitates the movement of membranous and luminal protein from their site of synthesis to site of that faces of central region of cells 33. The antioxidant and hepatoprotective role of Punilalagin and Puncatin against acetaminophen induced damages in the liver cells of rats has also been explored 34.  The effect of Sweritia extracts reduces toxicity induced in rat hepatocyte by CCl4 and paracetamol as W. somnifera reduces the toxicity of hepatic abnormalities 35.

Nucleus with granular nucleoplasm and distinct nucleolus in association with chromatin and peripheral heterochromatin were observed. Dense fibrillar portion and distinct granular portion of nucleolus clearly indicated the well synthesize and assembly of rRNAs 36.

Any alteration in hepatic cells reflects a variety of reactions of the whole organism to intoxication leading to a pathological condition. Such responses allow the fish liver to be considered as a good indicator of fish health status.37, 38 Similar antioxidant and hepatoprotective role of Acanthus ilicifolius has also been reported 39.

CONCLUSION: Thus the present study demonstrates the non toxic extracts of WSR protects the liver cells from Carbofuran toxicity and may enhance the healing   of self defense capacity  of fish due to  modulatory and antioxidative properties and significant recoupment in the histoarchitecture of hepatic cells. Restoration of normal shape of hepatocytes might be associated with the synergistic action on suppression of over expression of PTP-S2 which accounts for leukemic cell proliferation and stimulation of MAP essential for normal cytoskeleton of cell.

The preliminary studies of WSR reveals the presence of flavinoids in the root which may be support to the hepatoprotective activities and maintain the good metabolic activity. Such findings indicate WSR root extract    probably channelizes the biochemical endocytotic pathway and other biochemical Para cellular pathway. Among the three pathways endocytotic, secretary and biochemical; WSR seems to modulate the secretary pathway and thereby retrieve altered cellular integrity.

Prakriti Verma and A. Nath*