ABSTRACT: Genetic relationship between ten wild cultivars of C. roseus L. from four different regions of Rajasthan (Jaipur, Bikaner, Kota, and Jhalawar) with the marked difference in climatic condition was investigated using RAPD markers. Catharanthus roseus L. is a storehouse of several secondary metabolites such as vindoline, catharanthine, vinblastine, and vincristine, etc., thus making it an important source of drugs. A number of varieties of C. roseus L. occurs in wild and are cultivated in India. However, an evolutionary study has been limited. Using 24 decamer primers, we obtained a total of 221 amplicons with an average of 9.20 bands per primer. Out of 221 bands, 187 were found to be polymorphic, and the level of polymorphism was 84.61 percent. The average number of polymorphic bands per primer was 7.79. The average genetic similarity coefficient observed was 0.51 ± 0.186. Phylogenetic tree constructed using the neighbor-joining method of cluster analysis separated all the 10 samples of the C. roseus into two clusters. RAPD analysis thus was effective in differentiating the various cultivars, and the resulting high percentage of variation seems to have accumulated in the cultivars of different regions as a result of adaptation.

INTRODUCTION: Catharanthus Roseus L. (commonly known as periwinkle) is popular for its high medicinal value and as one of the richest source of a variety of secondary metabolites 1. It is believed to be of, Indian Ocean Island, Madagascar, origin. It has been generally known as Vinca rosea, Ammocallis rosea, and Lochnera rosea.

It is a perennial plant belonging to the Apocynaceae family.  It is found in the areas of India, Australia, Africa and southern Europe 2.

In India, C. roseus is found in all parts of India. C. roseus has potent secondary metabolism responsible for monoterpenoid glucosides and other terpenoid compounds, steroids, phenolics, flavanoids, anthocyanins, and 130 terpenoid indole alkaloids (TIAs) 3, 4, 5. It includes some medically important constituents like ajmalicine, Serpentine and Reserpine, which are well known for their hypotensive and antispasmodic properties 6. C. roseus species are particularly important due to their medicinal alkaloids contents such as vindoline, catharanthine, vinblastine. Vincristine and vinblastine (VBL) are one of the most important alkaloids produced from C. roseus due to its antitumor activity and wide pharmaceutical use 7, 4.

Genetic diversity plays an important role in plant conservation and their survival in adverse conditions. It can be measured at any functional level from a blueprint (DNA) to phenotype 2. DNA-based molecular markers have been proposed as an excellent tool for identifying geographical variation, genetic diversity, phylogenetic relationship, authentication of plant species, pharmacognostic characterization, species characterization and genetic mapping in medicinal plants.

Among the polymerase chain reaction (PCR)-based molecular techniques, random amplified polymorphic DNA (RAPD) is convenient in performance and does not require any information about the DNA sequence to be amplified 8. Due to its procedural simplicity, the use of RAPD as molecular markers for taxonomic and systematic analysis of plants 9, as well as in plant breeding and the study of genetic relationships have considerably increased 10. Although several varieties of C. roseus is commonly seen in India, there are a few reports on a genetic-based study on the phylogenetic relationship. In our previous work, variations in the alkaloid content of the different cultivars from different parts of Rajasthan with marked differences in environmental conditions, namely Jaipur, Bikaner, Kota, and Jhalawar 11. The aim of the present study was to find out genetic variations of the same cultivars of C. roseus using RAPD (random amplified polymorphic DNA).

Sample Collection: Fresh mature leaves of Catharanthus roseus, ranging in age from 7 to 8 months were randomly collected from four different locations of Rajasthan Table 1. The voucher specimen (RUBL 20862) is deposited at the Herbarium of the Department of Botany, University of Rajasthan Jaipur. Morphological details of the ten cultivars are given in Table 2.

TABLE 2: MORPHOLOGICAL DETAILS OF THE 10 PLANT SAMPLES COLLECTED FROM DIFFERENT PARTS OF RAJASTHAN

DNA Extraction and Purification: Three grams of tender twigs along with leaves were homogenized in liquid Nitrogen (liq. N2). The homogenized material was handled as per the method described by Doyle and Doyle 12. RNA was removed by treating the sample with DNase free RNase procured from Bangalore Genei, Banglore. Protein, including RNase, was removed by treating with chloroform: Isoamyl alcohol (24:1). DNA concentration and purity were determined by measuring the absorbance of diluted DNA solution at 260 nm and 280 nm.

The quality of the DNA was determined using agarose gel electrophoresis stained with ethidium bromide 13. The purity and quantity of the isolated DNA were determined by Nanodrop spectrophotometer (ND1000). The 260/280 ratio was found between 1.8 – 1.99 that indicated the DNA was pure enough for RAPD.

RAPD Analysis: For RAPD analysis, 50 random decamer primers obtained from OPRON TECHNOLOGY, USA were screened, of which 24 were finally used for amplification. The PCR reactions were performed in a 25 μl reaction mixture containing 1X Taq assay buffer, 0.5 units of Taq DNA polymerase, 200 μM of each dNTPs (Bangalore Genei Pvt. Ltd., India), 0.2 μM primers and 50 ng of template DNA. The PCR reactions were carried out in DNA thermal cycler (Model-CGI-96, Corbett Research, Australia). The PCR reactions were repeated twice for each primer to ensure the reproducibility of RAPD results.

Data Analysis: RAPD data were scored for the presence (1), or absence (0) and bands with the same molecular weight and mobility were considered as a single locus. Similarity matrix for RAPD primers was constructed using the Jaccard’s similarity coefficient values to find out the genotypic relationship. These data were then subjected to UPGMA (unweighted pair-group method with arithmetic averages) analysis to generate dendrograms using NTSYSpc-version 2.02e 13.

DNA Isolation and RAPD Analysis: A single sharp band is corresponding to lDNA was observed for all the samples of DNA on 0.8 percent agarose gel. The quality of DNA was determined as the ratio A260/A280, which ranged from 1.8 to 2.0, which is indicative of good quality plant DNA, and the ratio was almost consistent. The concentration of DNA preparation varied from 5.68 µg/µl to 0.94 µg/µl.

All the ten varieties of C. roseus were examined for random amplified polymorphic DNA (RAPD) genetic marker with 27 decamer primers (OPRON TECHNOLOGY, USA). However, out of these 27 primers, three primers did not amplify (OPC-5, OPG-1, and OPG-7). All the primers showing amplification were repeated at least twice to confirm the reproducibility and polymorphism.

This is because the stoichastic nature of the band, and banding pattern of DNA amplification with RAPD, reproducibility of the banding pattern has been found to change. Finally, only those bands were considered as polymorphic, which did not amplify in certain varieties on repetition. The banding pattern generated by each primer was primer and species dependent and varied from 5-14 at 37 °C annealing temperature. A total of 221 amplicons were obtained with 24 primers with an average of 9.20 bands per primer. Out of 221 bands, 187 were found to be polymorphic, and the level of polymorphism was 84.61 percent Table 3. The average number of polymorphic bands per primer was 7.79. 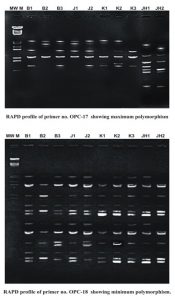 The discriminatory power of a primer is determined by a number of types defined by the profiles (banding patterns) generated and the relative frequency of these types, i.e. the number of genotypes generating that same pattern. These two facets of discrimination are not generally presented as a single numerical value and therefore, cannot be used for a straight forward comparison of different methods, we have used a single numerical index of discrimination (D) based on the probability that two unrelated strains sampled from the test population will be placed into different typing groups. This probability was calculated by Simpson’s index of diversity as described by Hunter and Gaston 6.

Dendro­gram constructed using the neighbor-joining method of cluster analysis separated all the 10 samples of the C. roseus into two clusters Fig. 2. Cluster 1, which is separated into 2 sub-clusters, first includes one Bikaner region, and second includes three Kota regions and two Jhalawar regions. Cluster 2 contains Bikaner and Jaipur regions. The cultivars thus show close relation in terms of origin. It can be explained from the observation that geographically isolated individuals tend to accumulate genetic variations during environmental adaptations 14. 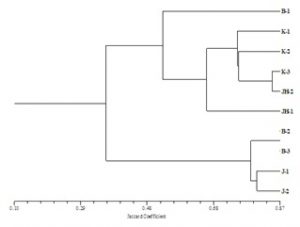 CONCLUSION: RAPD analysis revealed that a high percentage of polymorphism among the ten selected cultivars of C. roseus, which indicates that genetic variation, has been preserved over the different regions of Rajasthan.

These results will be useful to establish and maintain a germplasm collection of C. roseus and may guide us in designing strategies for breeding programs that maximize the utility of C. roseus genetic resources.