ABSTRACT: Antibacterial activity and protein content was studied in two species of octopus belonging to the family Octopoda. The highest zone of inhibition of about 34mm and 28mm were obtained against Vibrio parahaemolyticus and theprotein content was 107.16µg/L and 136.20µg/Lin Octopus dolfusii and Octopus aegina, respectively. SDS profile revealed bands of molecular weight of about 32.83 KDa to 72.36 KDa for both the species. Conclusively, the factors analyzed prove that the sample species play an important roles in chemical defensive mechanism against pathogens causing diseases in human and fishes. This study paves a way for further pharmaceutical research against pathogenic bacterial strains producing valuable drugs.

INTRODUCTION:  Ocean offers a large biodiversity of flora and fauna which is estimated to be over 5,00,000 species which are more than double of the land species. This rich diversity of marine organisms assumes a great opportunity for the discovery of new bioactive substance. The marine environment comprises complex ecosystems and many of the organisms are known to possess bioactive compounds as a common means of self-defense or for the protection of eggs and embryos. Some organisms derive the chemistry from dietary sources, while others synthesize the compounds de novo 1.

From 1960s approximately 300 bioactive marine natural products were field for patent. Approximately, 6,500 bioactive compounds have been isolated from the marine organisms 2.

In recent years, many bioactive compounds have been extracted, characterized and purified from many animals like bacteria, algae, dinoflagellates, tunicates, sponges, soft corals, bryozoans, cephalopods and echinoderms 3, 4.

Cephalopoda Cuvier, 1797 is the third largest molluscan class (after gastropods and bivalves), and comprises more than 800 marine species, inhabiting a variety of ecosystems, ranging from coastal to abyssal depths. Some mollusks like cephalopods have evolved to having reduced, internalized shells, or to entirely losing their shells.

Cephalopods occur in all marine habits of the world like benthic-cryptic or burrowing in coral reefs, grass flats, sand, mud and rocks; epibenthic and pelagic in bays, seas and in the open ocean.

In nature, animals are provided with their own protective response against their predators, likewise marine mollusks are protected by their shells. Chemical defenses are used extensively by both shelled and non-shelled mollusks 10. Cephalopods are famous for their defenses, from their fast jetting escape movements to changes in coloration that can be cryptic, disruptive or startling, to arm autotomy, to toxin venom and to inking.

Many studies on bioactive compounds from mollusks exhibiting antitumor, antibacterial and antiviral activities have been reported worldwide 11, 12, 13. Antimicrobial peptides are important in the first line of the host defense system of many animal species 14. Their value in innate immunity lies in their ability to function without either high specificity or memory. Moreover their small size makes them easy to synthesize without dedicated cells or tissues and they rapidly diffuse to the point of infection.

In the present investigation, an attempt has been made to screen the antimicrobial activity of the crude ethanolic extract of two species of Octopus namely Octopus aegina and Octopus dolfusii against some important human pathogens and fish pathogens and to study the protein profiles in these two species of octopus.

Estimation of Protein concentration: Protein estimations were carried out by the method of 20 using BSA (Bovine Serum Albumin) as a standard.

SDS PAGE: Electrophoresis of the crude extract was carried out by the method of 21 on 2-mm vertical gel consisted of 5% stacking gel mix, and main running gel mix of 30% acrylamide. The mixture was poured into the gel mold above the separating gel. The comb was inserted without any air bubble. After polymerization, the comb was removed without distorting the shape of the well. The gel plate was fixed in the electrophoretic apparatus and was filled with the electrode buffer without any air bubbles at the bottom of the gel. 30 µl of the crude samples were loaded to each of the wells along with the standard marker proteins. And the gel was run at 100V until the dye reaches the bottom of the gel.

When the tracking dye reached the bottom of the gel the power was stopped. The gel was carefully removed from the mold and immersed in staining solution overnight with uniform shaking at 37ºC. The gel was transferred to a suitable container containing the destaining solution and shaken gently and continuously.

The process was continued until the background of the gel appeared colorless. Standard molecular weight markers ranging from 25 to 116 kDa were used to determine the molecular weight of individual proteins. Molecular weight determination of an unknown protein by SDS PAGE was calculated using the formula,

Molecular weight determination of an unknown protein by SDS PAGE:

Preparation of extracts for antibacterial activity: Cephalopods were brought to laboratory, body tissues were removed, cut into small pieces and homogenized and extracted with 90% ethanol at room temperature for about 24-48 h 22. The extracts were centrifuged to collect the supernatant and it was concentrated under vacuum in a rotary evaporator (LARK, Model: VC-100A) at low temperature. The crude ethanol extract was assayed for anti-bacterial activity.

Antibacterial Activity: Antibacterial activities of the extracts were analyzed using well diffusion technique. The wells with 5mm diameter were punched with a sterile cork borer on to the Muller Hinton agar plates that was previously inoculated with the bacterial cultures. The wells were filled with 50 μl of the extract. Plates were held in the refrigerator for 2 hours and then incubated at 37°C for 24 hours. The wells containing the solvent alone were used as negative control. Antibacterial activities were evaluated by measuring the zone of inhibition showed in millimetres 23.

Lowest zone of inhibition was observed against Vibrio harveyi of about 15mm in the extract of Octopus dolfusii and 18mm against Vibrio sclintis in extract of Octopus aegina. This proves that the both the species of Cephalopods in which the samples were extracted in ethanol were very active against the fish pathogens, the results were given in Figure 2, which will be highly preferable for aquaculture constraints to combat bacterial diseases. 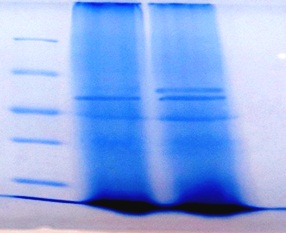 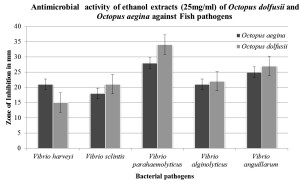 DISCUSSION: In recent years, greater attention has been paid to study the bioactivity of natural products due to their potential pharmacological importance.  Most of the antibacterial agents isolated from marine sources have not been active enough to compete with classical anti-microbials obtained from microorganisms 24.

However, majority of marine organisms are yet to be screened for discovering useful antibiotics.  In order to explore the components and its effect on various living systems, we have accessed antimicrobial activity against Human and Fish pathogens and also studied their protein profiles.

Our results collaborates with results of  25 who  has investigated the same species of Octopus with methanol which is a polar solvent  and the study resulted as follows, with 100% concentration, the highest inhibition zone of 17mm was observed against Escherichia coli in Octopus dolfusii extract, 15mm against Vibrio parahaemolyticus in Octopus aegina extract, and lowest inhibition zone of 9mm against Streptococcus pneumoniae, E. coli, Staphylococcus aureus, Streptococcus sp., in Octopus dolfusii, O. aegina extract respectively.

Antimicrobial peptides have been isolated from haemocytes of Mytilus edulis 32, 33 and M. galloprovincialis 34, 35, 36 and from the sea hare Dolabella auricularia 37. Moderate antibacterial and antifungal activity were also reported from the extracts of various bivalve mollusks 38. Broad spectrum of antibacterial activity has been reported for aqueous ink extract of the cephalopods L. duvaceli and S. pharaonis against nine human pathogens 39.

The protein concentration of Octopus vulgaris was estimated to about 144 µg/ml, and the molecular weight profiling exhibited electrophoretic form of protein bands from ink sample of Octopus sp., ranging from 82 to 248 KDa has been studied 40.

The current study was carried out from the powdered tissue sample of Octopus aegina and Octopus dolfusii, resulting with protein concentration of about 107.16µg/L and 136.20µg/L respectively, and molecular weight determination done using SDS-PAGE, the protein bands existed from 32.83 KDa to 72.36 KDa for both the species, which proves the powdered tissue sample of both the species, were relatively less distinct to the protein concentration profiling of the ink sample of Octopus vulgairs.

To conclude, the present study has proved that the cephalopods, Octopus aegina and Octopus dolfusii has antimicrobial activities and are also likely to be rich in proteins and ethanol being a polar solvent is good in isolating bioactive compounds from mollusk. Further research on characterization and purification of the compounds could indicate the good source of antibacterial agents and also could replace the existing inadequate and cost effective antibiotics.

ACKNOWLEDGEMENTS: The authors are grateful to Department of Biotechnology, Government of India, for financial support and Suganthi Devadason Marine Research Institute, for facilities provided.