ABSTRACT: The aim of this study was to analyze the molecular weight of protein and in-vitro antioxidant activity of marine gastropods Turbo brunneus, Cypraea annulus, and Babylonia spirata. The molecular weight of the protein was determined using SDS-PAGE, and its antioxidant potential was carried out by DPPH radical scavenging activity, reducing power activity and H2O2 radical scavenging activity. The molecular weight of protein varies from 54 kDa in T. brunneus, 38 kDa to 60 kDa in C. annulus, and 44 kDa to 116 kDa in B. spirata. The DPPH scavenging effect was high in Cypraea annulus (78.30%) followed by Babylonia spirata (65.20%) and Turbo brunneus (64.89%). C. annulus showed the highest reducing power of 95.36% at 500 µg/ml concentrations and lowest reducing the power of 52.07% at 100 µg/ml concentrations in the T. brunneus. The maximum radical scavenging activity was reported in T. brunneus (71% at 150 µg/ml concentrations), and minimum activity was reported in C. annulus (8.34% at 50 µg/ml concentration). The results show that tissue extracts of three marine gastropods found to possess good antioxidant activity and confirm their use as natural antioxidants in the future.

INTRODUCTION: Marine organisms are considered to be a magnificent source of bioactive molecules. Over the few decades, several new therapeutic agents derived from marine origin have entered preclinical and clinical trials 1. Molluscs are viewed as one of the important organisms to derive bioactive compounds. They also contain rich nutrients that are valuable to people of all ages 2. Marine and freshwater products have become attractive as a nutraceutical and functional foods and as a material for the development of drugs and specific health foods 3.

Proteins are biologically active compounds abundantly present in living organisms consisting of two or more amino acids linked by a peptide bond. Thousands of peptides have been identified from animals, plants, and microorganisms. Recent research has been paid attention on peptides from marine animals since they have been found as secondary metabolites from sponges, ascidians, tunicates, and molluscs.

The structure characteristics of these include various unusual amino acid residues which may be responsible for their bioactivity. In the present scenario, there has been an increment in the number of studies focused on marine bioactive peptides 4. Biologically active peptides are observed to have diverse activities, including opioid agonistic, mineral binding, immune-modulatory, antimicrobial, antioxidant, anti-thrombotic, hypo cholesterols and antihypertensive actions 5. Molluscs are species that have a wide range of uses in pharmacology. Peptides present in protein hydrolysates have biological activities depending on their molecular weights and amino acids-sequences. Conus magus 6 contains Ziconotide, a 25 amino acid peptide with three disulphide bond. Marine gelatin derived peptides are expected to exert high antioxidant effect 7. Therefore, marine-derived bioactive peptides with anti-oxidative properties may have great potential for use as nutraceuticals and pharmaceuticals and could be a substitute for synthetic antioxidants 8.

In our body, the oxidation process leads to cell damage, cancer, and degenerative diseases; antioxidant molecules present in different molluscs prevent cell damage from oxidation reaction4. Oxidation reaction can produce free radicals, which start chain reactions that damage cells 9. Free radicals are charged molecules, i.e., they have an unpaired electron, which causes them to seek out and capture electrons from other substances in order to neutralize themselves. The harmful action of the free radicals can, however, is blocked by antioxidant substances, which scavenge the free radicals and detoxify the organism 10. Current research in free radicals has confirmed that antioxidants rich foods play an essential role in the prevention of cardiovascular diseases, cancer, neurodegenerative diseases, as well as inflammation and problems caused by cell and cutaneous aging 11.

An antioxidant is a molecule capable of slowing or preventing the oxidation of other molecules. Antioxidant molecules present in different molluscs prevent cell damage from oxidation reaction 4. The present study was designed to evaluate the antioxidant activity of the whole body tissue of gastropod T. brunneus, C. annulus and B. spirata.

MATERIALS AND METHODS: In the present study the gastropods Turbo brunneus, Cypraea annulus, and Babylonia spirata were collected from the Gulf of Mannar coastal region of Thoothukudi. The freshly collected samples were brought to the laboratory, cleaned, and washed with fresh seawater to remove all impurities. The shells were broken; tissues were removed and then dried in hot air oven at 56 °C for 48 h and used for further studies.

DPPH Radical Scavenging Activity: The antioxidant activity of the chloroform extracts of T. brunneus, C. annulus, and B. spirata (20 to 100 µg/ml) was determined using the DPPH radical scavenging activity. The scavenging ability of DPPH radical was assessed following the method of Harborne JB and Baxter H (1995) 13.

Reducing Power Activity: The reducing power was evaluated by the method of Athukorala Y et al., (2006) 14. The chloroform extract of different concentrations (100 to 500 µg/ml) of T. brunneus, C. annulus and B. spirata were investigated.

H2O2 Radical Scavenging Activity: The ability of the chloroform extracts of gastropods to scavenge hydrogen peroxide was assayed according to the method of Ruch RJ et al., (1989 ) 15. 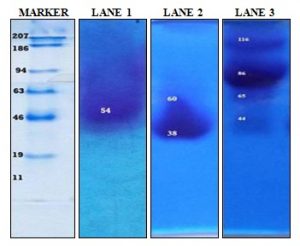 The results of the DPPH scavenging activity of three gastropod extracts are shown in Fig. 2.

DISCUSSION: Marine invertebrates, which develop in a different environment, are the source of a broad range of pharmacological substances 16. Among the invertebrates, the molluscs found to possess good biomedically important products and have developed very effective mechanisms that are part of their innate immunity 17. They are considered as one of the important sources to derive bioactive compounds that exhibit antitumor, antimicrobial, anti-inflammatory, and antioxidant properties 4. Marine molluscan extracts are usually complex mixtures of bioactive molecules, mainly proteins, peptides, and sterols. Cyclic and linear peptides obtained from marine animals have increased our knowledge about new potent cytotoxic, antimicrobial, ion channels specific blockers and many other properties with novel chemical structures associated with original mechanisms of pharmacological activity 18.

Proteins with different effects have been reported by various workers. Naraoka T et al., (2002) 19 reported a protein that occurred in the ink of ilex argentinus migrated as a 94 kDa protein on polyacrylamide gel electrophoresis 20.

After electrophoresis, the clear band was detected in the gel, which represented proteins of molecular weight of 14, 17, 22, 45 kDa. Sivasubramanian K et al., (2011) and Vennila R et al., (2011) 27, 28 studied the molecular weight profiling of 82 to 248 kDa protein bands from an ink sample of Octopus sp. Periyasamy N (2012) et al.,29 detected various protein bands of 97, 63, 61, 42 kDa in Conus inscriptus and 93, 61, 42, 40 kDa in Conus betulinus 30 revealed the presence of 47 to 106 kDa proteins in the tissue extracts of Cantharus tranquebaricus which may be responsible for various biological activities. Thangaraj S and Bragadeeswaran S (2012) 31 reported three types of neurotoxins with molecular weights between 45 kDa and 95 kDa in sea anemones S. mertensii and S. gigantea. In Octopus aegina and Octopus dolfusii the molecular weight, determination was done using SDS-PAGE, the protein bands existed from 32.83 kDa to 72.36 kDa for both the species 32.

In Conus lentiginosus, the molecular weight of purified toxins was determined by SDS-PAGE on a 12% gel system using standard protein markers and yielded 3 bands 40 kDa, 71 kDa, and 120 kDa 33.

The molecular weight determination of crude tissue extract of Perna viridis ranged from 63 kDa to 29 kDa. These revealed proteins may be responsible for various biological activities in the tissue extracts 34, 35 isolated 9 kDa and 110 kDa protein bands from Pomacea insularum and in Callinectes sapidus the molecular weight of peptide molecule ranges within 40 to 100 kDa which is in agreement with the present work.

In the present study, the protein isolated from T. brunneus, C. annulus and B. spirata showed the molecular weight of 54 kDa, 38 kDa to 60 kDa, and 44 kDa to 116 kDa subunits Fig. 1. The results of the present study coincide with the findings of the above authors. Oxidation reactions are a necessary part of life; unfortunately, they can also get damaged because of the production of reactive oxygen species. The reactive oxygen species (ROS) formations such as superoxide anion, hydroxyl radical, and hydrogen peroxide are natural byproducts of the normal metabolism of oxygen that have crucial roles in homeostasis and cell signaling in human body 36. Accumulation of ROS in the body can result in oxidative damage to cellular components leading to cell death and tissue injury. Antioxidants from natural sources are preferred by consumers due to the concerns about the toxic and carcinogenic effects of synthetic antioxidants. The antioxidants are responsible for prevention of chain initiation, binding of transition metal ion-catalysts, decomposition of peroxides, prevention of continued hydrogen abstraction, reductive capacity and radical scavenging 37.

The use of DPPH radical provides an easy, rapid and convenient method to evaluate the antioxidants and radical scavengers 38. DPPH is a stable free radical assay which is widely used to evaluate the free radical-scavenging activity of various natural products and some pure synthetic compounds. The decrease in absorbance of DPPH radical caused by antioxidants is visually noticeable as a change in color from purple to yellow when measured at 517 nm 39. The degree of discoloration indicates the scavenging potential of the antioxidant compound in the extracts. In the present study, chloroform extracts of T. brunneus, C. annulus, and B. spirata showed potential antioxidant activities.

The reducing capacity of a compound may serve as a significant indicator of its potential antioxidant activity. The reducing power ability greatly depends on the presence of reductones, which exhibit antioxidant potential by breaking the free radical chain by donating a hydrogen atom 44. The amount of Fe2+ complex can then be monitored by measuring the formation of Perl’s Prussian blue at the absorbance of 700 nm.

Very similar to the present study 46 reported that the O. macrocera showed higher reducing ability at highest concentration (100 µg/ml). Nazeer RA and Naqash ASY (2013) 47 described the in-vitro antioxidant activity of solvent extracts from two Indian molluscs Loilgo duvauceli and Donax cuneatus. Pachaiyappan A et al., (2014) 48 showed the maximum reducing power in the extract of M. casta (0.158) and P. viridis (0.127) and minimum activity was observed in the extract of H. conchlidium (0.024), S. bicolor (0.02) and M. virgins (0.018) 34 showed the reducing capacity of 27.8% at 100 µg/ml in green mussel. Pachaiyappan A et al., (2014) 49 reported the reducing power of the samples might be due to the di and mono hydroxyl substitutions in the aromatic ring which possesses potent hydrogen donating activities.

CONCLUSION: The present study demonstrates the effect of gastropod extracts on SDS-PAGE characterization of the protein responsible for the bioactivity. The proteins were found to possess antioxidant activities, as determined by DPPH, reducing power and hydrogen peroxide scavenging activities.

The results of the present study reveal that marine organisms are a rich source of antioxidant compounds with a remarkable impact in the field of pharmaceutical, industrial, and biotechnological product developments.

ACKNOWLEDGEMENT: The authors are grateful to the Principal of St. Mary’s College (Autonomous), Thoothukudi, for providing necessary facilities. They also express their sincere thanks to Dr. R. Ragunathan of CBNR, Coimbatore for his support to carry out this work.

CONFLICTS OF INTEREST: No conflicts of interest.