ABSTRACT: Klebsiella pneumoniae is a significant pathogen for nosocomial infections and quickly becomes the most prevalent beta-lactamases produced that are resistant to several antimicrobials. To comprehend deeper the condition of multidrug resistance [MDR]. Objectives: Our research was directed at identifying Klebsiella pneumoniae isolates containing shv β-lactamase gene and the relationship between them and some antimicrobial resistance in order to prevent rejection of therapy. Methods: Overall, 64 K. pneumonia it gathered pneumonia isolates and conducted a drug susceptibility test for 13 different antibiotics by the system Vitek 2 to identify their susceptibility patterns. Phenotypic tests for species producing ß-lactamase have determined the resistance phenotype of isolates. Results: The information indicated that 60[93.7%] of the entire isolates tested were Shv genes, while the remainder were positive. The PCR was used to amplified drug resistance. Highest antibiotic resistance in instances of ESBL positive. In fact, 2[33.3%] of the phenotypical confirmatory Test [PCT] sample were shown to be negative isolates. The data has shown that prediagnosed positive phénotype isolates were genetically positive for EsBL development. Concept: the collection of resistant strains is an alert in order to create rigorous controls on an infection that prevent b-lactamase genes from expanding. The surveillance of medicinal isolates and the reasonable use of antimicrobials therefore become important in order to reduce the propagation and incidence of the strength processes causing this measure.

INTRODUCTION: K. pneumoniae is one of the prominent pathogens in the Enterobacteriaceae class and is a Gram-negative tube. The bacterium is discovered indigenously in soil and water, but in mammals, including people, also on mucosal surfaces. It is often linked to nosocomial infections that occur during hospitalization 1.

Antimicrobial Resistance: Gram-negative bacteria have always been prone to multidrug resistance and especially Enterobacteriaceae, like E. coli, K. coli. Pneumoniae, one of the global largest worries had become. These bacterial infections contribute to extended hospitalizations and greater death rates 4. EsBLs are beta-lactamases resistants that can be showed to Penicillin, early and extended-spectrum cephalosporins and aztreonam, and are hindered by beta-lactamase inhibitors 5. These enzymes have established from penicillin-binding proteins, demonstrating a sequence homology. The selective pressure displayed by the production of lactam -producing organism probably caused this development.

Shv-, TEM-, and CTX-M are the most Known ESBLs. These proteins each originated from a progenitor of their own. Of course, shvs are most common in Europe; TEMs dominate the USA, while CTX-Ms are more and more identified globally 6.

shv Gene: The most common in K. Pneumonia is the SHV-1 lactamase. Pneumonia and the plasmid-mediated ampicillin resistance is accountable for up to 20 percent of this species. In numerous K types. Bacterial chromosome 7 includes pneumonia, bla shv-1 genes or a gene relevant to it. In most shv varieties with an ESBL phenotype, the replacement of serines with glycine at place 238 is characterized.

These enzymes have an efficacy, particularly against cephalosporins. There are more than 150 various ESBLs defined. Plasmids are one of the toughest challenges to regulate, to minimize this issue 8.

Bacterial Isolates: Sixsty-four isolates from K. During November 2016 to January 2017, pneumonia was isolated from the educational hospital of Baghdad, Baghdad central health laboratory, from various samples of the [saliva, blood, and sputum]. All isolates were obtained with the kit API-20E [Bio-Mereix, France] and identified. Vitek 2 system conducted additional confirmation tests. Prior to collecting samples, ethical approval was acquired.

Confirmation of Identification by Vitek 2 System: The identification cards of the system Vitek 2 verified all prediagnosed bacteria. The procedure was performed under the instructions of the manufactured company 9.

Screening of ESBLs-Producing Strains by Phenotypic Confirmatory Test [PCT]: Screening of ESBLs-Producing Strains by Phenotypic Confirmatory Test [PCT]: Phenotypical analysis of the ESBL-producing isolates was done by the CLSI guideline of broth dilution test. For ESBL testing, 1.5 × 108 cfu/ml [0.5 McFarland Standard] bacterial suspension concentrations have been adjusted in Nutrient broth. For identification of bacteria manufacturing ESBLs, the oxoid combined disc method had been used. The bacteria were cultivated using this procedure on a Muller-Hinton agar platform and then on cefotaxim [30 μg], cefotaxime [10 μg]; ceptazidime [30 μg]; ceftazidime [10 μg] on 20-30 mm of paper with other discs. For 18-24 hrs the plates have been incubated at 37 ºC. An area around cefotaxim / clavulanate and ceftazidime / clavulanate of 5 mm has been identified with 5 mm of increament in ESBL producing bacteria 10.

Prevalence of Antibiotic Susceptibility of Klebsiella Pneumoniae Isolates and the Minimum Inhibition Concentration (MIC): The whole isolates were evaluated by the Vitek 2 system to assess its antibiotic proneness of each antibiotic. MICs of eight agents [were determined according to CLSI recommendations 11.

Polymerase Chain Reaction [PCR] Amplification: PCR was performed with the particular primers Table 1 to identify beta-lactamase encoded gene [blashv]. The PCR combination was established in a complete quantity of 20 microns, consisting of 5 μl Premix Accupouer[Bioneer, Korea], 10 Pico/microns per primer and 5 μl DNA template. The thermal program: 4 min at 96 ºC, then 30 cycles from 1 min at 96 °C, 1min at 55 ºC and 1min at 72 ºC, then ultimate extending at 72 ºC for 10 min, was optimized and conducted in Master Cycler [Eppendorf] in the following.

RESULTS AND DISCUSSION: The finding indicates that K. pneumoniae was identified and verified by 65 [57%]. Air-conditioning Pneumoniae. Urine specimens were commonly positive [n = 41 [65%] of all urine specimens tested. Whereas, eight [12.5%] and 15 [23.4%] were blood and sputum. Among the beneficial isolates pre-detected was a total of 42 [65.6 %], the Vitek 2 scheme and disk method were verified by phänotyping as ESBL producers, while all the other isolates Table 2 were negative. Furthermore, 36 [85.7%], two [4.7%] and four [9.5%] were shown simultaneously as ESBLs in panel [3-1] of all beneficial saliva, blood or sputum isolates.

The MIC of Klebsiella pneumoniae Isolates: An ESBL experiment, which uses ceftazidime alone and cefotaxime with clavulanic acid are still provided by the Vitek automated microbial susceptibilité evaluation system. The presence of an ESBL is indicated by a predetermined decrease in growth of hardening wells compared with those containing drugs alone 13. Moreover, enhanced computing algorithms have also proven to classify lactamases current on the basis of the phenotype of susceptibility models with several ß-lactam drugs in many gramnegative clinical isolates. A phenotypical antibiotic resistance model K. pneumonia has been performed in the antimicrobial susceptibility experiment. Where, the findings demonstrate that K was highly resistant to penicillin and ampicillin. Reduced resistance of K is granted to pneumonia at 52 [81.75%] and ceftazidime. The isolate of asthma as indicated in Table 3 at 50 [78.12%].

Multi-drug resistant ESBLs have been correlated over latest years with greater levels of disease and death and 14. The behavioral genetics of those isolates must therefore be monitored. It is guaranteed. The drug resistance levels of positive ESBL types producing 13 antibiotics are much lesser than China CHINET's surveillance for bacterial drug resistance 15.

Our outcomes of the 64 isolates have shown that 59 [93.75%] are cephalosporin tolerant and of these 59 isolates, 58 [86.5%] are phenotypically positive ESBLs. Many other colonized and ESBL-infected risk factors produced by K. Arterial and central venous catheterization, colonization of the gastrointestinal tract by ESBL-productive K. pneumoniae were recorded. Low birth weight for preterm babies, preliminary antibiotic use and mechanical ventillationpneumoniaes, long lifespans in the intensive care unit 16. The result of this study showed that the most sensitive isolates were against cefotaxtin and ceftriaxone as displayed 8 [5.1%] and 12 [7.6%] respectively.

Correlation between Genetic [SHV] and Phenotypic Determinant in K. pneumonia: Phenotypic EsBL identification trials only verify that an ESBL is developed but that the EsBL subtype cannot be detected. Only molecular screening techniques could be used for precise recognition. The results show that 60 [93.7%] of complete isolates examined had Shv-gene screening, the remaining being positive as shown in Table 3 as well as chart [3-1].

The results indicated that 60 [93.7%] of complete isolates examined have Shv-Gene monitoring. In antibiotic resistance, the percentage of ESBL positive occurrences was highest. Detection of genetic determinants related to drug resistance against K. pneumoniae isolates are crucial for adequate antimicrobial therapy and monitoring of infection 17. Furthermore, the outcome indicated that 2 [33.3%] of PCT-negative isolates were positive.

The information also indicated that the positive phenotype pre-diagnosed isolates were genetically positive for EsBL development.

It may be clarified as ESBLs are primarily transmitted by plasmid, whereas AmpCs are primarily regulated by chromosome as seen in Table 3. Meanwhile, the presence of TEM, SHV, and CTX-M β-lactamase genes with β-lactamase development or ESBL phenotype 18 did not show any relationship in a study 18. Likely, phenotypes that occur in genomic DNA without the existence of these genes indicate that the existence of other ESBL genes may be accountable for phenotypes of resistance, or opposite to those genes that are associated with other antimicrobial resistance. 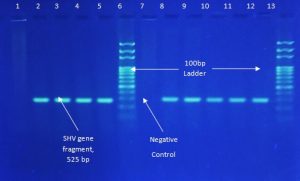 DISCUSSION: The purpose of this research was to assess the incidence of K-producing ESBL. Pneumoniae and identify the existence of SHV genes in the isolate that producing ESBL. Based on others outcomes of, the incidence of ESBL producing bacteria about 68.5% of ESBL isolated bacteria were positive for TEM and/or SHV 20. Furthermore, the ratios of ESBLs producing organisms in hospitalized patients to outpatients were 57.9 to 42.1 which were different from a previous study, suggesting that while most of the resistance to antibacterial agents is associated with hospital admission, ESBLs producing bacteria may have both 20. In fact, the proportions of ESBLs producing organisms in infected patients to outpatients were 57.9 to 42.1, which were distinct from a prior research, suggesting that although most of the resistance to antibacterial drugs is linked with hospital admission, bacteria generating ESBLs may have obtained outlets both in the society and in the hospital. The frequency of ESBLs generating. In another research E. coli, K. Pneumoniae, respectively, was 15.6% and 20%. Diffusion technique and confirmatory experiment for the phenotypic disc. They also found that there were 94 to 28 21 proportions of ESBLs generating isolates from patients injured to outpatients.ESBLs producing bacteria may have both community and hospital acquired sources 22 22.

CONCLUSION: K. Pneumoniae isolates that were not impacted by most frequently used antimicrobials were known as evolving clinically implicated infectious agents. Clinicians with very few therapeutic choices remaining to counter these pathogens are challenged by the worldwide distribution of this agent. In addition, better techniques are required to isolate these pathogens and to monitor people who they are colonizing while awaiting the finding of current effective drugs toward resistant Gram-negative bacteria. The shortage in the pathway of novel antibacterial drugs would imply that we should preserve as much as convenient the effectiveness of current antibacterial drugs. While addressing these requirements, it is also crucial to have antimicrobial stewardship procedures in location, promote surveillance, and execute efficient attempts to manage infection to restrict the propagation of these bacteria. The seclusion of resistant strains is therefore an alert system to establish strict infection control measures to avoid b-lactamase genes from spreading. The surveillance of drug-resistant isolates and the reasonable use of antimicrobials are therefore important in order to restrict the distribution and incidence of the fundamental resistive Furthermore, this research demonstrated the effectiveness of the PCR method in detecting the genes of the ESBLs and their relationship with each other and their impact on drug resistance. Inaccurate detection of antibiotic resistance may result in improper treatment of antibiotics, which may, by selective pressure, guide bacteria to generate fresh genes of opposition.

ACKNOWLEDGEMENT: This research has been conducted in (Baghdad collage of medical sciences) and (Department of microbiology, Collage of medicine , Alnahrain university).