INTRODUCTION: Anticoagulants are the drugs which prevents the blood coagulation. Warfarin is major drug used as anticoagulant in the treatment of various disorders like stroke, pulmonary embolism, heart attack and arterial fibrillation 1. Warfarin belongs to the class of coumarins, which is an important nucleus in the design of new drug molecules because of its diverse pharmacological activities like anti-oxidant 2, anti-HIV 3, anti-convulsant 4, anti-microbial 5, anti-cancer 6 and, analgesic 7. In addition, studies have shown that coumarins are rapidly and extensively absorbed through human, rat, and mouse skin, and the compounds remain metabolically unchanged during absorption 8.

The main objective of this study is to design novel 3- substituted coumarin derivatives and to carry out its docking studies on Vitamin K epoxide reductase enzyme to determine its anticoagulant activity.

Now a day’s researchers in pharmaceutical fields are using newer technologies for the effective production of new drug molecules. Molecular modeling is the new technique which consider molecule as model and predict its interactions with target molecules and its activity so that it will be time and cost effective. In case of molecular “docking” ligand molecule is dock inside cavity of protein so as to mimic natural course of interaction of ligand and receptor via lowest energy pathway 9. Docking is a method which predicts the preferred orientation of one molecule into another when bound to each other to form stable complex. Knowledge of the preferred orientation in turn may be used to predict the strength of association or binding affinity between two molecules using scoring function 10.

Pharmacological activities are mainly depends upon the pattern of substitution. We have design 3- substituted 5-hydroxy coumarin derivatives with substitution at third positions like phenyl, furan ring with ether linkage and pyrane ring with methyl linkage. Comparison was done based on its ligand-receptor interaction, binding energy(ΔG), and PLP score.

Along with Warfarin, other drugs like acenocoumarol, phenindionedabigatran and rivaroxaban are also used but last two are rarely prescribed as compared to Warfarin 11. Dabigatran and rivaroxaban mainly act on thrombin and prevent the formation of fibrin from fibrinogen which constitutes the framework of the blood clot 12. Older anticoagulants like Warfarin, acenocoumarol, and phenindione block the effect of Vitamin K which is needed to make some clotting factors like prothrombin (factor II), factor VII, IX, X. Deficiency of Vitamin K results in the formation of a defective prothrombin molecule. In the presence of calcium ions, normal prothrombin adheres to the surface of phospholipids vesicles and greatly increases the activity of clotting mechanism. A defective prothrombin formation has reduced calcium binding ability and it has no biological activity 13.

Clotting factors are glycoproteins that have gamma-carboxyglutamic acid residues at N-terminal end of the peptide chain. The enzyme involved in forming an active prothrombin is vitamin K-dependent carboxylase located in the microsomal fraction of liver cells. It has been suggested that Vitamin K drives the carboxylase reaction by abstracting a proton from the relatively unreactive methylene carbon of glutamyl residue, forming a 2, 3-epoxide. Figure 1 shows oral anticoagulants like warfarin interfere with the gamma-carboxylation of glutamic acid residues by preventing the reduction of Vitamin K to its hydroquinone formbased on this we have taken Vitamin K epoxide reductase enzyme as target molecule 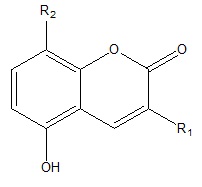 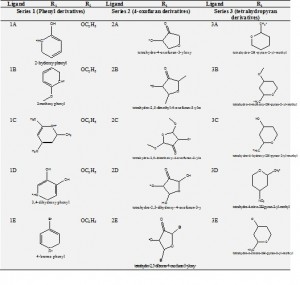 Figure 3 shows Vitamin K epoxide reductase with its bound inhibitor ubiquinone, taken from the protein data bank (PDB code 3KP9). Ubiquinone was extracted from protein molecule and used as reference ligand in docking process. We have chosen ubiquinone binding site for our docking purpose and checked for all hydrogen and complete valency. Protein molecule was energy optimized using Merck Molecular Force Field (MMFF) parameter and energy was noted as energy of optimized protein ‘a’. Protein molecule contains eight cavities where ligands can bind. These cavities are shown in Figure 4. 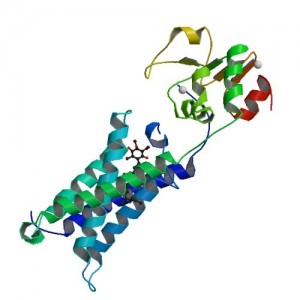 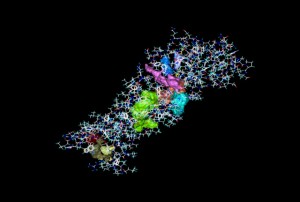 Three dimensional structure of coumarin derivatives were drawn by using Chemsketch software. Energy of each ligand was optimized using MMFF and energy was noted as energy of ligand ‘b’. Conformers were generated for each optimized ligand using systematic search method. Number of conformer generated mainly depends upon the torsion angle and number of rotatable bonds 14.

Where n is no of rotatable bond.

Gripe docking was performed and docked solutions were ranked by PLP score. Selected conformers for each compound with minimum energies were docked inside cavity of target molecule and its PLP score was compared with ubiquinone (reference ligand). Conformer with a minimum PLP score was merged in a cavity of target molecule and their interactions like hydrogen bond, hydrophobic, van der Waal, pi stacking were analysed.  Finally, energy of a merged molecule was calculated using MMFF and noted as the energy of optimized aggregate (c).

Binding energy (ΔG) was calculated by using following formula for each ligand molecule 15.

For each docked ligand-protein complex, PLP score, binding energy and crucial ligand protein interactions were analyzed and their values were listed in Table 2.

In the first designed series (1A-1E), phenyl ring with the substitutions like OH, OCH3, (CH3)3, (OCH2), Br and C2H5 substitution at 8th position were used. Compound 1Ehas formed three hydrogen bond interactions as shown in Figure 5. Hydrogen atom of a hydroxyl group has formed one hydrogen bond with Met111A at a distance of 1.79Å. 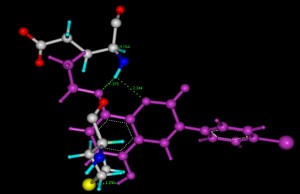 Etheral oxygen of coumarin ring and oxygen atom of ethoxy group has formed hydrogen bond with Glu115A amino at a distance of 2.24 Å and 1.37 Å respectively. Compound 2D with a hydroxy substitution of furan ring has involved in the hydrogen bonding with Tyr178A at a distance of 1.59 Å as shown in Figure 6. Compound 1D interacted through the hydrophobic interactions with the amino acid residues such Ile, Thr, Val, Leu, Ser, Ala, Met, Phe, Gluwhich is depicted in Figure 7. 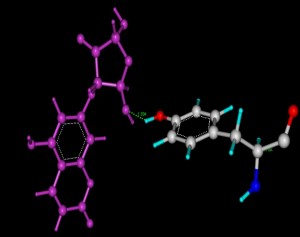 Compound 3B containing methyl substitution on a pyrane ring has formed two hydrogen bonds, one is between hydroxy group and Glu115A and another between methoxy and Val75A at a distance of 1.72Å and 2.55Å respectively as shown in Figure 8. Two pi stacking interactions were observed between Phe67A, Phe14A and aromatic ring of 3B as shown in Figure 9. 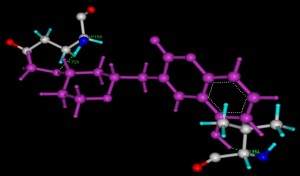 FIGURE 8 HYDROGEN BOND INTERACTIONS OF 3B.

FIGURE 9 PI-STACKING INTERACTIONS OF 3B.

First series of coumarin derivatives containg phenyl ring at third position has shown good interaction and oxygen containing substituents had played major role in it so phenyl ring with hydroxy, methoxy and ethoxy substituents can effectively act as Anti-coagulant based on molecular docking studies.

Pyrane series also shown considerable bonding but as such pyrane ring was not involved in hydrogen bonding which is responsible for specificity towards target molecule (Except compound 3D). In second series, furan ring with its substituents were involved in hydrogen, hydrophobic interactions with minimum ΔG and PLP score. Between these three series of 5- hydroxy coumarin derivatives with phenyl and furan substitute at third position shown better result as compared to pyran ring substituted compounds.

Ring substitution like hydroxy, methoxy, ethoxy will increases the no of interactions and overall potency/affinity towards target molecule. From the result of docking studies, 3- substituted-5-hydroxy coumarin scaffold could be effectively optimized into a drug candidate as anticoagulant agent.

ACKNOWLEDGEMENT: The authors are thankful to Dr. B. S. Kuchekar, Principal of the MAEER’s Maharashtra Institute of Pharmacy, Pune, India for his constant encouragement and support and Dr. C. G. Gadhe, Assistant Professor at Department of Life Sciences, College of BioNano Technology, Gachon University, Republic of Korea for his helpful discussion.