ABSTRACT: Objective: The bioactive compounds of Rhizopora mucornata were docked against the bacterial enzyme protein tyrosine phosphatase to determine the potential inhibition. In this research the molecular docking analysis of drug compounds with virulent protein was studied. Material and Methods: Protein Tyrosine phosphatase is an enzyme that is being present in staphylococcus infection that plays an important role in cellular localization, enzyme stability. The target enzyme for Staphylococcus aureus was studied and retrieved from PDB. The bioactive compounds from the leaf extract of Rhizopora mucornata was screened for Lipinski rule of Five and ADMET properties. Autodock 4.2.3 software was used for molecular docking, and the visualization was done by using discovery studio 3.1. Result: The compound 3-methyl-2-(2-oxopropyl) furan shows better binding energy with -1.14 Kcal/mol against the enzyme protein tyrosine phosphatase followed by 3-cyclopentylpropionic acid, 4-methoxyphenyl ester +35.14 Kcal/mol. The hydrogen interactions and Vander Waals interactions, along with total residues of amino acids were studied. This research mainly focuses on targeting the virulent enzyme by using potential drugs to discover a novel therapeutic product.

INTRODUCTION: The Rhizophora mucornata is a plant species that is found in the coasts and rivers banks of East-Africa through Madagascar, island of Indian Ocean, southeastern mainland of Asia, Indonesia, Philippines to northeastern Australia and south pacific region. Rhizophora is the genus name which is derived from Greek language, where “Rhizo” means roots “phora” means bearing that is root bearing.

This species is commonly called loop-root mangrove, red mangrove or Asiatic mangrove 1. The trees are either small or medium-sized trees of about 10 to 15 meters and 20 to 25 meters respectively. These small and medium-sized plants are found in banks of the rivers and the fringes of the sea.

The leaves are elliptical of approximately 12 cm long and 6 cm wide and have large number of stilt roots. The seeds are viviparous, and the fruit is single-seeded and germinates on the trunk 2. The pollen grains are pollinated through wind or insects. The flowers are bisexual and self-compatible. The edible part of the plant is the fruit which baked and eaten. The shoot of this plant is consumed as vegetable.

According to Malesian archipelago the important source of tannin is the barks. The timber is used for the construction of buildings, in making the fish traps and as firewood. The uses of the plants also include in manufacturing adhesives plywood. This plant is used as medicine in curing haematuria, other diseases and disorders 3. The use of this wood is very limited because of its lightweight, poor durability and small size of the trunk.

Phytochemical Analysis: The Rhizophora mucornata is subjected to phytochemical analysis and is found to have compounds such as steroids, alkaloids, flavonoids, glycosides, saponins, phenols 6. The phytochemical analysis is one of the basic methods used in the field of plant technology. It is an analytical method in which we can find out the compounds present in the plant. Many phytochemical analyses have been done based on this particular species. Using the leaf extract obtained from the plant, different tests are taken place to find out the compounds present in the plant and the following results are obtained are alkaloids, terpenoids, steroids, tannins, quinones, saponins, flavonoids, cardiac glycosides and phenols 4, 5. The root extract consists of saponins, alkaloids, flavonoids, and triterpenes. Then bark contains alkaloids, tannin, saponin, phenolic, flavonoid, terpenoid and glycosides, the fruit and flower of this plant also shows same result as bark but the amount present in some particular components have some variations from the above results taken from the five-different parts present in the Rhizophora mucornata leaf contain a greater number of compound than other four parts 6.

Medicinal Values: This kind of plant basically used in most of Asian countries as medicine and also as a remedy for some particular diseases like diarrhea, hemorrhage, dysentery, diabetes, angina [Ischemic chest pain] and haematuria. Old leaves and roots are used by Malayans during childbirth, barks of this plant are used for bloody urine by Burmese 7, leaves of these plants are used for fish injuries 11, but the honey which is taken from these flowers are said to be poisonous 8. Rhizophora mucornata is used for diabetes due to the presence of flavonoids. Therefore the current study aimed to determine the potential of the drug compound against protein tyrosine phosphatase by molecular docking analysis 9.

Enzyme Target Preparation: Enzyme protein tyrosine phosphatase with PDB Id: 3rof is the drug target against the bioactive compounds. The targeted protein was searched in Protein Data Bank by downloading it in pdb format. The hydrophobic molecules and the hetero-atoms were removed by using pymol viewer.

Protein Tyrosine Phosphatase Enzyme: It follows the signal transduction pathway, followed by an enzyme for cell cycle and MAP kinase pathway. The enzyme tyrosine phosphatase contains two low molecular weight proteins like PtpA and PtpB that produce pathogenic staphylococcus infection. Most strains are resistant to penicillin and MRSA that are common in the hospitals and are emerging in the community. The staphylococcus infection mostly infects the skin and can be spread. The virulent infection had caused severe damage is Methicillin-Resistant Staphylococcus aureus (MRSA) that has high pathogenicity causing infection that interchanging the nature from a drug to toxin character. Along with strain some coagulase-negative bacteria are being produced like Staphylococcus aureus and Staphylococcus endocarditis that interferes with the immune defences 11. There are 30 different types of infection caused by staph infection through both coagulase-positive and negative strains, by which the staphylococcus have the ability to synthesize or secrete many factors that allow the bacteria to survive in host of bacterial cell. By characterizing the Staphylococcus aureus only three tyrosine phosphatase is known 12.

An infected patient should be treated with methicillin, if he/she is resistant to methicillin, vancomycin will be introduced into the patient, rather than that ampicillin is also used to the staph infection. Some methods like surgical and oral treatment are being processed on the prospective conditions. The key characteristics of (LMW-PTP) is that it binds at the active site fold with the members of classical tyrosine and dual-specificity phosphatases families. At certain stage the LMW-PTP fold is conserved in Staphylococcus aureus by synthesizing and cloning in expression vector. The unique features Of PtpA are that the loops are on the peripheral of the molecule while loop 2 is close to active site that causes difference in substrate recognition. The diagnosis of staph infection begins with attempting to culture the bacteria from an infected site in any area with pus or blisters should be cultured 13.

ADMET Properties: The compounds retrieved from Rhizopora mucornata were screened by using ADMET properties which mainly concentrates on the Absorption Distribution Metabolism Excretion and Toxicity of the compounds. These properties show the proportional activity of compounds in water solubility, gastrointestinal absorption, plasma protein binding, cytochrome P450. The toxicity of the drug compound was tested by knowing the dosage of humans, rat and the toxic substance of drugs against liver and skin. The drug screening was done by using Swiss ADME tool of Swiss Institute of Bioinformatics (http://www. sib.swiss) to calculate the compound behavior. The canonical smiles were retrieved from PubChem and NIST library. The Swiss ADME is mainly based on the principle of vector algorithm knowing as inhibitor as well as substrate 14.

Discover Studio 3.1- Visualizer: The software Discovery studio 3.1 was developed by Accelrys that shows the ligand interactions with 3 letters and ID and insertion code. The program is free of cost which plays a major role in showing the interactions of protein with ligand. This software mainly deals with macromolecule engineering, ligand-receptor interaction, pharmacophore modeling 15.

RESULTS AND DISCUSSION: The docking analysis will only be carried out if the bioactive compounds of Rhizopora mucornata satisfies the Lipinski rule of five. Based on the standard profile the bioactive compounds must possess molecular mass less than 500 Dalton, Hydrogen bond donor less than 5, hydrogen bond acceptors less than 10, high lipophilicity less than 5 (LOGp) and molar refractivity between 40-130. The compounds that satisfies the Lipinski rule of software are 2R-acetoxymethyl- 1, 3, 3- trimethyl-4t-(3-methyl-2 buten- 1- yl)- 1t- cyclohexanol, 3-methyl-2-(2-oxo-propyl)furan, n-propyl 11-octadecenoate, Phytol, 3-cyclopentylpropionic acid, 4-methoxyphenyl ester, 1,3,3-trimethyl-2-hydroxymethyl-3,3-dimethyl-4(3-methylbut- 2- enyl)- cyclohexene and (4α-trans)-decahydro- 4α- methyl- 1- methylene- 7- (1methyl-ethylidene)-naphthalene as shown in Table 1. The satisfied compounds were further screened for ADMET properties and molecular docking was done for the determination of protein ligand interactions.

ADMET Properties: The satisfied compounds were screened for ADMET properties by using Swiss model. The absorption properties of the compounds were analyzed, the compound n-propyl 11-octadecenoate, Phytol, and (4α-trans)-deca-hydro- 4α- methyl- 1- methylene-7-(1methylethyli-dene)-naphthalene ranges from -7.544 to -6.496 log mol/L. The calcium carbonate permeability shows a better permeability in n-propyl 11-octadecenoate. The gastrointestinal absorption shows 97% of absorption in 3-methyl-2-(2-oxopropyl) furan compound. The glycoprotein substrate and the inhibitor shows no result in all the compounds as shown in Table 2.

TABLE 1: SCREENING OF LIPINSKI RULE OF FIVE AGAINST BIOACTIVE COMPOUNDS OF RHIZOPORA MUCORNATA

The metabolism properties of the bioactive compounds mainly deal with cytochrome P450 that contains heme as a cofactor, which is also known as hemeproteins. The substrate and the inhibitor of cytochrome were screened as shown in Table 4.

The excretion and toxicity of the compounds were analyzed in which the human dosage of the drug will be examined along with the rat at chronic and acute toxicity. The liver toxicity also been examined in which all the compound are safe against liver toxicity and compound like 2R-acetoxymethyl- 1, 3, 3- trimethyl- 4t- (3- methyl- 2 buten-1-yl)-1t-cyclohexanol are safe against skin sensitisation and remaining compounds have skin sensitisation as shown in Table 5.

The molecular docking analysis was done against protein tyrosine phosphatase for staph infection. The control docking was done against vancomycin a standard drug used for curing Staphylococcus aureus which results in the binding energy of +125.63 with grid size 20 Å. The algorithm used in docking is a genetic algorithm with rigid structure file.

The compound 3- methyl- 2- (2-oxopropyl)furan shown better binding energy at -1.14 Kcal/mol followed by 1, 3, 3-trimethyl-2-hydroxymethyl-3,3-dimethyl- 4(3- methylbut- 2- enyl)- cyclohexene at +46.16 Kcal/mol. This states that the Rhizopora mucornata does not have activity against antibacterial strains. The highest binding energy of -1.14 Kcal/mol consists of one hydrogen atom with amino acid residue CYS 138. The pictorial representation of 2D and 3D interaction of protein and ligand interaction are shown in Fig. 1-4. The binding energy and the interactions of each molecular docking were shown in Table 6. 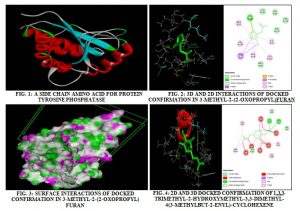 ACKNOWLEDGEMENT: We the authors sincerely thank Vels Institute of Science Technology and Advanced Studies (VISTAS) to carry out this research work.