INTRODUCTION: Acquired Immunodeficiency Syndrome is caused by the lethal Human Immunodeficiency Virus (HIV), 1, 2 which spreads through the vital cells in the human immune system specifically, the CD4+ T cells and dendritic cells 3, 4. HIV is classified into two types, namely HIV-1 and HIV-2 that differ in their virulence.

HIV-1 is more fatal compared to HIV-2 5. Statistics reveal that till date alone, approximately 34 million people are living with HIV worldwide, and 8 million are surviving on anti-retroviral drugs. HIV-1 infection can be targeted at various stages, for example, viral entry, viral replication or assembly of viral components. Unfortunately, there is no cure for HIV (Human Immunodeficiency Virus) 2, 4, 6.

HIV-I TAT (Trans-activator-Transcription Protein) is a viral protein encoded by the TAT gene. It is essential for transcription of the viral genome. The primary function of the protein is reproduction of the virus but it also plays a pivotal role in HIV-based immunodeficiency.

TAT is a short protein encoded by two exons and its size varies from 86 to 106 residues 7. TAT contains six different regions with distinct functions. Region I (residues 1–21) is a proline-rich region and has the conserved Trp 11. Region II (residues 22-31) has seven conserved cysteines at positions 22, 25, 27, 30, 31, 34 and 37. No other cysteines are found in the sequence and there is no evidence of disulphide bridges required for TAT function. Region III (residues 38-48) has the Phe 38 and the conserved sequence LGISYG from residues 43-48. Region IV (residues 49-59) is rich in basic residues and has the conserved sequence RKKRRQRRRPP. Region V (60-72) is a glutamine-rich region. Region VI constitutes the C-terminus of TAT encoded by the second exon but its size can be variable depending on the HIV isolate. The C-terminus shows similarities with the N-terminus in a high percentage of prolines. Resolution of this structure was a determining factor in drug designing. The chemical synthesis of the drugs allowed the specific binding and the inhibition of TAT to be verified 8.

Quassinoids refer to the group of chemically altered triterpenes that has undergone extensive oxidative biodegradation of the Simaroubaceae plant family. The Quassinoids are natural phytochemicals that contribute towards anti-malarial, Insecticidal, anti-inflammatory, and anticancer activities. Pentacyclic derivatives of the quassinoids have shown a remarkable anti-tumor activity. The main active groups of quassinoids are ailanthionone and benzoquinone. Theailanthionone consists of glaucorubinone and halocanthone while, benzoquinone consists of glaucarubine, simarolide, sitosole and melianone 9. The antimalarial activities of the quassinoids were evaluated earlier by the folate or antiifolates drugs which prevent folic acid production, essential for the folate dependent enzymes. These plant extracts are known widely for their anti-leukemic activity besides showing a host of other medicinal properties 10. The main aim of this study was to investigate the interaction between quassinoid compounds and the active sites of the synthetic HIV-1 TAT (PDB: IJFW) protein, 8 using Argus Lab software to propose its efficiency as an anti-HIV agent. Furthermore, the quassinoids were subjected to molecular properties prediction to filter and confirm their anti-HIV activity. The dynamics study was executed to understand the stability and flexibility of the protein-ligand complex to identify pharmacological targets.

Calculation of ADME properties and pIC50 Values: Molinspiration server was used to predict the molecular property of the alkaloids that predicts both physiochemical and pharmacological properties such as LogP, hydrogen bonding characteristics, molecular size, and rotatable bonds. Thus, the Quassinoids were subjected to Molinspiration server analysis. Furthermore, the scores were compared with the standard anti-HIV drug 15. Lipinski's rule of five was used to evaluate the acceptability of the quassinoids. For QSAR studies, the IC50 value of each compound is converted into the predicted pIC50 values by using Sanjeev's Lab online tools 16.

Molecular Docking: The Docking interaction of the synthesized TAT protein with one best compound obtained from QSAR study, was carried out using Argus lab software. Docking was performed using “Genetic Algorithm (GA) Dock” exhaustive search with a grid resolution of 0.40 Å. Docking precision was set to “Regular precision” and “Flexible” ligand docking mode was employed for each docking run. The stability of each docked pose was evaluated using Argus Lab energy calculations and the number of hydrogen bonds formed.

Molecular Dynamics Simulation: The simulation of the ligand-enzyme complex was performed using the GROMACS5.1 software. Ligand-enzyme complexes with the lowest binding energy were selected for molecular dynamics (MD) simulation. The ligand parameters were analyzed using PRODRG online server in the framework of the GROMOS force-field 43a1. The ligand-enzyme complex was solvated using a simple point charge water box, under periodic boundary conditions using 1.0 nm distance from the protein to the box faces. The system was then neutralized by Cl− or Na+ counter ions for TAT-Holacanthone and TAT-Holacanthone complex systems, respectively.

Energy minimization was done for 1,000 steps by the steepest descent method. For the sake of flowing energy minimization, the systems were equilibrated under a constant number of particles, volume, and temperature conditions for 100 ps at 300K, followed by 100 ps under a constant number of particles, pressure, and temperature conditions. All the covalent bonds with hydrogen atoms were constrained using the Linear Constraint Solver algorithm. Finally, MD simulation was performed for 25 ns to check the stability of the ligand-enzyme complexes. The potential of each trajectory produced after MD simulations were analyzed using Root Mean Square Deviation (RMSD), Root Mean Square Fluctuation( RMSF), and Hydrogen-bond( H-bond) using the GROMACS Utilities. The graphs were produced using the grace tool.

QSAR Studies: 37 compounds were used to perform ADME studies (using Molinspiration tool) to see which compounds bide the Lipinski rule of five. 20 compounds that abided the Lipinski rules were used for QSAR studies in order to find a potential compound against HIV TAT activity. The Molecular properties obtained from molinspiration tool has been tabulated for reference Table 2. The 20 compounds that supports Lipinski`s Rule of 5 were obtained and a correlation analysis was performed using Build QSAR tool. An MLR (Multiple linear regressions) graph was plotted and the best compound-Holacanthone was obtained. As per previous studies Holacanthone is one of the active groups amongst the quassinoid compounds 12. This quassinoid compound has been used previously for antimalarial studies. 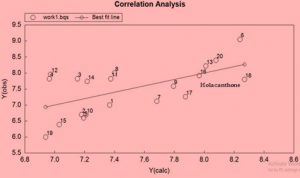 GRAPH 1: SHOWS THE MULTIPLE LINEAR REGRESSION GRAPH THE X-AXIS SHOWS THE DESCRIPTORS AND Y-AXIS CONTAINS THE pIC50. HOLACANTHONE (LIGAND 16) WAS PREDICTED TO BE THE BEST COMPOUND

Molecular Dynamic Simulations: Molecular Dynamics simulations are carried out to determine the structural stability within a nanosecond time scale for TAT-Holacanthone complex. This complex is selected based on its least binding energy and is subjected to 25 ns MD simulations, and the result is analyzed as follows:

Root Mean Square Deviation (RMSD): RSMD, a crucial parameter to analyze the equilibration of MD trajectories, is estimated for backbone atoms of the complex. Measurements of the backbone RMSD for the complex provided insights into the conformational stability.

Holacanthone-TAT complex was analyzed for RMSD and the RMSD graph depicts that the residues show slight fluctuations at 10 ns and at around 22 ns. From 11 ns to 20 ns the complex remains stable.

H-bond: The intermolecular H-bonding between the protein and ligand plays a vital role in stabilizing the protein-ligand complexes. The stability of the hydrogen bond network formed between Holacanthone and synthesized TAT-protein is calculated throughout the 25 ns simulation period. The Hydrogen bond interaction for the aforementioned complex is stable from 11ns to 25 ns.

CONCLUSION: In the present study, the molecular docking and MD simulations are performed to interpret the possible binding affinity of synthesized TAT protein with the best predicted Quassinoids compound-Holacanthone. The best ligand conformation is chosen based on binding free energy value, hydrogen bonding, and hydrophobic interaction. The conclusion drawn from the docking analysis is that Holacanthone interacts well with synthesized TAT protein (PDB: IJFW). Furthermore, MD simulation is performed to analyze the binding stability of synthesized TAT and Holacanthone. RMSD and H-bond results reveal that TAT-Holacanthone complex is stable. Though there are several reports on the medicinal use of Quassinoids for other diseases, there is no in-silico study predicting the anti-HIV activity of Quassinoids against TAT activity. Our study is perhaps the first to attempt to predict that Holacanthone is a potential anti-HIV drug molecule. Hopefully, the proposed molecule can be put forward for a constructive concept of designing HIV inhibitors. Thus, it might be a useful candidate for HIV therapy.

ACKNOWLEDGEMENT: We acknowledge Vels Institute of Science Technology and Advanced Studies, for providing us the necessary facility and infrastructure needed to complete this research work.