ABSTRACT: Anti-HIV drug discovery has been increasingly focusing on HIV-1- reverse transcriptase as a potential therapeutic target. Pyrimidine-based derivatives are studied for their HIV-1 reverse transcriptase inhibition activities using in-silico techniques. The library of 19 pyrimidine-based derivatives designed using computer-based molecule designed software and docked with HIV-1 reverse transcriptase enzyme using AutoDock. The reported binding energies for the library of molecules are ranging from -9.43Kcal/mole to -13.19 Kcal/mole, with the precision of ±1 Kcal/mole. It is concluded that the presence of –CH2OH at R1 position suitable for hydrogen bonding and –C6H5 group enhance the negative binding energy (ΔG Kcal/mole).

INTRODUCTION: Human Immunodeficiency Virus type-1 (HIV-1) is a member of the retrovirus family. It is a slow, progressive, degenerative and induces a life-threatening disease for the human immune system and is called the acquired immunodeficiency syndrome (AIDS) 1, 2. Nowadays acquired immunodeficiency syndrome (AIDS) is the fastest growing cause of death in human, especially in the case of young people. Human immunodeficiency virus type 1 (HIV-1) reverse transcriptase (RT) converts single-stranded viral RNA into a double-stranded proviral DNA. This is a necessary step in the HIV-1 replication cycle. There are many enzymes in the HIV-1 life cycle that can serve as a novel drug target 3.

RT inhibitors have been the primary therapeutic strategies in AIDS patient treatment; therefore the inhibition of reverse transcriptase (RT) has been one of the important targets in inhibiting the replication of HIV-1 4, 5. Inhibitor designing has proved to be a success story from decades and many inhibitors are designed for specific enzymes of HIV-1.

For the treatment of HIV-1, two types of RT inhibitors are used. The first one is nucleoside RT inhibitors (NRTIs), which bind directly to the active site of RT polymerase and terminate DNA synthesis after incorporation into the newly synthesized DNA. The second one is non-nucleoside RT inhibitors (NNRTIs) that bind to the hydrophobic pocket within the polymerase domain of the p66 RT subunit, resulting in inhibition of RT activity 6, 7. Pyrimidine class of compounds is not exhaustively checked for its inhibition activity against HIV-1 RT. Hence, Pyrimidine class of compounds were designed and checked for their activity against HIV-1 RT. Also, it was aimed to understand which pharmacophore at the proper location in Pyrimidine can provide a higher inhibition activity. 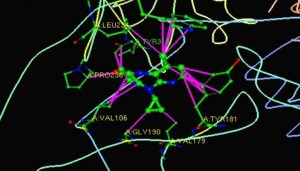 The Ligand substrate interaction study reveals that the 1VRT in complex with the original ligand (Nevirapine) shows hydrophobic interaction with amino acids namely 190-GLY, 234-LEU, 236-PRO, 229-TRP, 181-TYR, 318-TYR 106-VAL, and 179-VAL. It is reported in Fig. 1. However, it does not show any hydrophilic interaction 12.

Ligand Design: It has been well established that the heterocyclic rings will play a major role in HIV-1 inhibitors due to their conformational restriction as well as their ability to fill hydrophobic pockets and provide functionality for hydrogen bonding interactions 13. The Pyrimidine based molecule is the important class of compound. The general structure of the pyrimidine-based lead compound is shown in Fig. 2.

From the series of molecules designed, 19 molecules were selected for next process depending on their total energy. The list of designed molecules and calculated LogP by Crippen’s and Viswanadhan’s methods are shown in Table 3.

Validating the Docking Model by Known Drugs: Before docking the set of designed molecules, the model needs validation, and hence, the known drug Nevirapine was docked with the selected enzyme as described in AutoDock manual 15. The reported binding energy is –9.35874 Kcal/mol. Whereas, 1VRT in complex with the original ligand (Nevirapine) shows hydrophobic interaction with amino acids namely 190-Glycine (GLY), 234-Leucine (LEU), 236-Proline (PRO), 229-Tryptophan (TRP), 181-Tyrosine (TYR), 318-Tyrosine (TYR), 106-Valine (VAL) and 179-Valine (VAL). Hydrophilic interaction between ligand and protein is not reported. This finding is comparable with the ligand interaction study using NGL viewer 12. Fig. 3 shows the hydrophobic interaction with protein whereas Fig. 4 depicting negative result for hydrophilic interaction.

The known drug Nevirapine interacts with enzyme and successfully docked. The reported binding energy is negative and the ligand-enzyme complex is stable. The result of the known drug is validating the docking methodology as the drug is already interacting with the selected binding site in vitro. The negative value of free energy is also supporting the validity of docking methodology.

Inhibition of Designed Molecules: The inhibition of designed molecules was performed using AutoDock 15, 16 which is a widely used tool for understanding the possibilities of inhibition of enzyme with small molecules. The docking procedure is systematically explained in the AutoDock manual 15. Table 4 depicts the hardware and software used for executing the docking process. The calibration of the installed system and software were achieved using the standard procedure as described in Autodock user manual 15.

TABLE 4: COMPUTER SYSTEM AND SOFTWARE USED FOR THE DOCKING PROCESS

In the present study, docking was performed using a Non-genetical algorithm (NON-GA) and Genetic Algorithm (GA). GA is the most intelligent search algorithm and provides a more realistic interaction between ligand and enzyme. Table 5 depicts the parameters set for the Non-genetic and Genetic algorithm used for docking. The process of docking is systematically explained in the user manual of AutoDock 15 and used as it is.

Set of Pyrimidine class of compounds as shown in Table 3 were docked with IVRT binding site. Obtained binding energy for each molecule is depicted in Table 6.

TABLE 6: RESULTS OF INHIBITION STUDY FOR PYRIMIDINE BASED MOLECULES WITH 1VRT

RESULTS: The obtained binding energy (∆G) of all molecules ranges from -9.39 Kcal/mole to -13.19 Kcal/mole. It is found out that there is little difference in the value of binding energy obtained by GA and Non-GA docking. GA method shows more conformations than Non-GA method. Molecule number 7, 8, 9, 11, 15 & 17 docked with higher negative binding energy compared to other molecules.

* represents the location of hydrogen bond

Out of these -OH group attached to a phenyl ring in amino acids 188-TYR and 318-TYR found prominent for hydrogen bonding.-CH2OH group at R1 in 2, 4, 6 substituted pyrimidine position is found to be favorable for hydrogen bonding. The decrease in binding energy of pyrimidine-based molecule studied here is most likely due to the phenyl ring. Molecule number 15 and 17 can further be studied for biological activity.

The present result supports the fact that the binding pocket of 1VRT is favoring hydrophobic interactions. If the molecule makes a hydrogen bond with 179-VAL, 190-GLY, 229-TRP or 318-TYR, then possibilities of having higher negative binding energy are more. Hence, a further increase in hydrophobic groups in ligand will help in making the successful HIV-1 RT inhibitor.

CONFLICT OF INTEREST: The author(s) declare that there is no conflict of interest.