ABSTRACT: AIDS, a pandemic disease caused by HIV has a high mortality rate. Therapeutic failures have risen due to the emergence of resistant viral strains and adverse side-effects of Anti-HIV drugs. Thus, there arises a need to develop novel and promising anti-HIV drugs. BMS-378806 (BMS-806) inhibits the initial stages of HIV-1 infection by blocking the binding of viral gp120 protein to host-cell CD4 receptor. Protein- Ligand interaction plays a major role in structure-based drug designing. In this study, analogs of BMS-378806 drug for HIV target protein gp120 were virtually designed using Marvin Sketch 4.1.10 and molecular docking studies were carried out using HEX 4.1 docking software. From the results, it was observed that, analog-6 showed better binding affinity to gp120 with Etotal = -102.67 than the original BMS-378806 drug, thus indicating that this compound might be considered as a potential drug candidate against gp120 for controlling HIV-1 infection. Further studies need to be carried out to evaluate the pharmacological efficacy of these analogs.

INTRODUCTION:The Acquired Immuno Deficiency Syndrome (AIDS) is caused by Human Immunodeficiency Virus (HIV) and is one of the primary causes of death among adults aged 15–59 years resulting in about 14% of deaths globally in this age group 1. Low to middle income countries continue to be highly affected by this disease. The condition is further worsened by poor socio-economic conditions, increased incidence of opportunistic infections, extensive drug abuse and poor access to health care 2. Majority of HIV disease in India is due to HIV-1 virus subtype C 3. The disease is characterized by decrease in the number of helper T lymphocytes in an infected individual and is accompanied by several opportunistic infections 4.

HIV infection begins with a chain of attachment events via HIV-1 viral spike that encompasses two glycoproteins: gp120 and gp41 5.

The gp120 subunit associates with the CD4 receptor and the CCR5 co-receptor, inducing a series of conformational changes in the envelope protein 6. This primary association is followed by fusion of the membrane and transfer of the viral genetic material into the host cell, thus allowing reproduction of the virus, thereby, destroying the host cells 7.

Since, amino acid sequence of gp120 is highly conserved and less susceptible to mutations 8, 9, gp120 is considered as a promising target for the development of new anti-HIV drugs 10. Various studies have shown that BMS-378806 binds to gp120 and inhibits the interactions of the HIV-1 envelope protein to cellular CD4 receptors by altering the conformation of the protein such that it cannot recognize CD4, thus blocking the viral entry into the host cell 11.

Docking may be defined as method for predicting the preferred orientation of one molecule to another when bound to each other to form a stable complex 13. It is often used to predict the binding orientation of small molecule drug candidates to their protein targets thus providing useful information on the binding affinity and activity of the small molecule. Therefore, docking plays an imperative role in the rational design of drugs 14.

In this study, an attempt has been made to provide a lead in AIDS research by designing analogs for the drug BMS-378806 to improve the binding affinity and potency of BMS-378806, thus aiding in identifying potential gp120/CD4 inhibitors.

Receptor protein: The structure of gp120-CD4 protein complex of HIV-1 was downloaded from Protein Data Bank 15 and was saved in the PDB format. Its PDB ID is 1U6A 16. Visualization of this protein can be seen in Fig. 1. 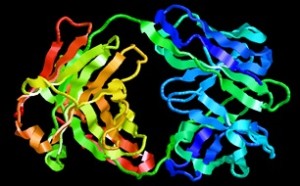 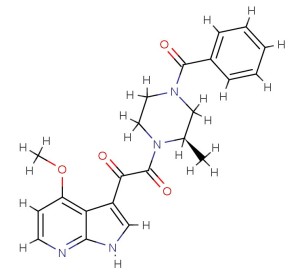 Molecular Docking: To study the receptor-ligand interaction, rigid-body docking was performed with HEX 4.1 19. The docking file of the receptor and the ligands were prepared by removing heteroatoms manually. Spherical Polar Fourier Transform, Fast Fourier Transform (FFT) steric scan, FFT final search and Molecular Mechanics (MM) refinement were the parameters employed in the docking process. The protein-ligand complex of the molecules was saved for active site analysis. The docked complex was then viewed and the interacting residues with the ligands were analysed using RasMol 2.7.5.2 visualization software 20.

RESULTS AND DISCUSSION: The gp120-CD4 protein complex of HIV-1 (receptor) retrieved is a crystal structure of F105, a reactive human antibody, which recognizes the CD4 binding site of gp120. From literatures, BMS-378806 was identified as HIV-1 inhibitor that blocks viral entry into the host cells by inhibiting the interactions of viral gp120 to cellular CD4 receptors.

Structure of BMS-378806 and designed analogs are shown in Fig. 2 and Fig. 3 respectively.

The receptor and the drug structure files were converted to PDB format. In addition, the physical and chemical properties of the drug were studied from structure page of PubChem in order to ensure that it satisfies Lipinski’s Rule of Five.Analogs were virtually designed by employing bioisosteres in Marvin Sketch 4.1.10.  Further, the docking files were prepared and receptor-ligand interactions were studied by performing docking procedure using HEX 4.1 with all the six analogs against receptor 1U6A as shown in Fig.4. 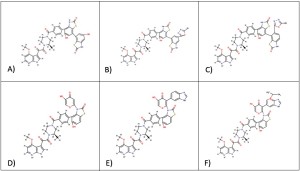 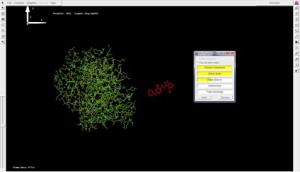 Initially, there was less interaction between the receptor and the drug with Etotal value of -27.74. However, with each analog, binding affinity improved, and the one with minimum energy (Etotal = -102.0) was selected as the best inhibitor.

Docked complex of Analog-6 and 1UGA is shown in Fig. 5. From Table 1, it is clear that Analog-6 exhibits strong inhibitory activity against gp120 and could be used as drug of choice against HIV-1infection. 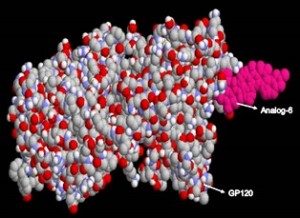 FIG. 5: VISUALIZATION OF DOCKED COMPLEX OF ANALOG-6 AND 1U6A IN RASMOL

TABLE 1: DOCKING RESULTS OF PARENT DRUG AND ITS ANALOGS WITH RECEPTOR 1U6A

CONCLUSION: AIDS is caused by HIV infection 21. It is a pandemic disease affecting millions of people worldwide and possesses a high mortality rate. HIV proteins such as gp120 are primarily responsible for entry of HIV into the host cell. BMS-378806 is a small molecule HIV-1 inhibitor that blocks viral entry into the host cells, thereby aiding in prevention of HIV infection whilst controlling AIDS. This study was aimed at identifying potential inhibitors that can effectively block binding of viral gp120 protein to human CD4 receptor.

To achieve this, six analogs were designed using Marvin sketch 4.1.10. This was followed by molecular docking studies using HEX 4.1 to check the improved effectiveness of analogs against gp120 target protein. Analog- 6 was found to be an effective inhibitor in terms of binding affinity (Etotal = -102.67) against gp120 envelope protein, lower than that of the parent compound. Thus, analogs were found to be better than the conventional drug.

Our study confirms that computer-aided drug designing is an alternative to experimental studies and is useful in designing novel and potential anti-HIV drug candidates.

ACKNOWLEDGEMENT: The author would like to thank Mr. K.R. Dase Gowda, Assistant Professor, Department of Biotechnology, New Horizon College of Engineering, Bangalore and Dr. K. Dhananjaya, IBX, Bangalore for their guidance and support throughout the project work.