ABSTRACT: In recent years, in silico approaches have been predicting novel drug targets. The objective of this study was to analyze the inhibitory action of canthin-6-one alkaloid by computational docking studies. For this study, natural metabolite canthin-6-one isolated from Simarouba glauca was used as ligand for molecular interaction. The crystallographic structure of molecular target Epidermal Growth Factor Receptor (EGFR) tyrosine kinase was obtained from Protein Data Bank (PDB) database (PDB ID: 1M17). Gemcitabine, Cisplatin and Thiotepa were taken as the standard for comparative analysis. Computational docking analysis was performed by using online program PATCHDOCK. The canthin-6-one showed optimum binding affinity with a molecular target (EGFR - tyrosine kinase) with the binding energy of (-248.25) as compared to the standard drugs Gemcitabine (-188.48), Cisplatin (-45.26) and Thiotepa (-190.89). These results indicated that canthin-6-one could be one of the potential ligand to treat cancer. These potential drug candidates can further be validated in wet lab studies for its proper function.

INTRODUCTION: Simarouba glauca belongs to family Simaroubaceae, commonly known as “The Paradise Tree” or “King Oil Seed Tree” or “Laxmitaru Tree”, is a versatile multipurpose evergreen tree having a height of 7-15 m with tap root system. It is a poly-gamo-dioecious tree and a potential source of biodiesel 1. In India, it is mainly observed in Andhra Pradesh, Karnataka and Tamil Nadu etc. It can adapt a wide range of temperature, has the potentiality to produce 2000 - 2500 kg seed/ha/year 2 can grow well in marginal lands / wastelands with degraded soils 3 and therefore considered as a major forest tree 4.

This plant is well known for its different types medicinal and pharmacological properties. The bark and leaf extract of S. glauca is well known for its different types of pharmacological properties such as haemostatic, antihelmentic, antiparasitic, antidysenteric, antipyretic and anticancerous 5. The leaf, fruit, pulp and seed of S. glauca are known to possess medicinal properties such as analgesic, antimicrobial, antiviral, astringent, emmenagogue, stomachic, tonic and vermifuge 6.

Canthin-6-one was first isolated in 1952 by Haynes et al., from Australian Pentaceras australis (Rutaceae) 8, 9. Since then, more than forty members of this class of alkaloids have been reported from several plants primarily of the Rutaceae 9, 10 and Simaroubaceae 9, 7 families, but also from Malvaceae, 9 Amaranthaceae, 9 Caryophyllaceae, 9, 11 Zygophyllaceae, 12 and recently from fungi (Boletus curtisii Berk.) 13. Several of these alkaloids have been bioassayed and show interesting pharmacological activities 9, 14, 15. Canthin-6-one and some derivatives isolated from Zanthoxylum chiloperone var. angustifolium displayed interesting antifungal activities 16, 17.

Gemcitabine is a nucleoside analog used as chemotherapy. Gemcitabine is used in various carcinomas: non-small cell lung cancer, pancreatic cancer, bladder cancer and breast cancer 20. Cisplatin is one of the most potent chemotherapy drugs widely used for cancer treatment 21. N, N'N'-triethylenethiophosphoramide (Thio TEPA) is a cancer chemotherapeutic member of the alkylating agent group, now in use for over 50 years. It is a stable derivative of N, N', N''- triethylene-phosphoramide (TEPA). It is mostly used to treat breast cancer, ovarian cancer and bladder cancer 22.

Epidermal growth factor receptors (EGFRs) are a large family of receptor tyrosine kinases (TK) expressed in several types of cancer, including breast, lung, esophageal, and head and neck. EGFR and its family members are the major contributors of a complex signalling cascade that modulates growth, signalling, differentiation, adhesion, migration and survival of cancer cells. Due to their multidimensional role in the progression of cancer, EGFR and its family members have emerged as attractive candidates for anti-cancer therapy 18. Specifically the aberrant activity of EGFR has shown to play a key role in the development and growth of tumour cells, where it is involved in numerous cellular responses including proliferation and apoptosis 19. In this study, docking of target protein (EGFR tyrosine kinase) was carry out with compound canthin-6-one and to evaluate the compound docking and active site binding.

Preparation of Macromolecule: The three dimensional structure of epidermal growth factor receptor (EGFR) tyrosine kinase (PDB ID: 1M17) was downloaded from the RCSB protein Data Bank 23. The hydrogen atoms were added to the target protein molecule after removing the water molecules for docking.

Selection and Preparation of Ligand Structure: Ligand, which interacts with protein’s binding sites, is a small molecule. There are several possible mutual conformations in which binding may occur. These are commonly called binding modes 24. The SDF file of canthin-6-one was obtained from PubChem database 25 and then converted to PDB file with the help of Open Babel 26 and the PDB file of standard drugs Gemcitabine, Cisplatin and Thiotepa was taken from DrugBank Database 33.

Analysis of Target Active Binding Sites: The enzyme epidermal growth factor receptor (EGFR) tyrosine kinase was retrieved from the RCSB Protein Data Bank with PDB ID: 1M17. Active sites of the enzyme were identified by CASTp 37 server. CASTp (Computed Atlas of Surface Topography of proteins) is used to verify the binding sites of a protein. It includes annotated functional information of specific residues on the protein structure 27.

Molecular Docking Analysis: A computational ligand‑target docking approach was used to analyze structural complexes of the epidermal growth factor receptor (EGFR) tyrosine kinase with canthin-6-one and standard drugs in order to understand the structural basis of this protein target specificity. Finally, docking was carried out by online program PATCHDOCK 28, 34. PATCHDOCK program serves to find different docking transformations which can yield good complementarity in its molecular shape based on molecular docking algorithm. The PDB format of both protein and alkaloid including standard drugs was sent to PATCHDOCK server for docking. The docked structure was further analyzed by using UCSF Chimera 36.

RESULT AND DISCUSSION: In this present study, the interactions between the epidermal growth factor receptor (EGFR) tyrosine kinase (target) with canthin-6-one and standard drugs (ligands) was studied to explore their binding mode, docking study was performed using online program PATCHDOCK with UCSF Chimera. Epidermal growth factor receptor (EGFR) tyrosine kinase (PDB ID: 1M17) structure was derived from RCSB Protein Data Bank and used as a target for docking simulation. The details of canthin-6-one and standard drugs (Gemcitabine, Cisplatin and Thiotepa) are mentioned in Table 1. The 3D structure of protein and ligands was visualised by using Rasmol 35 as show in Fig. 1 and Fig. 2 respectively. 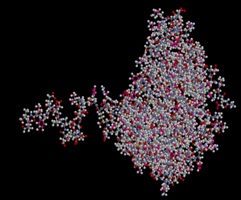 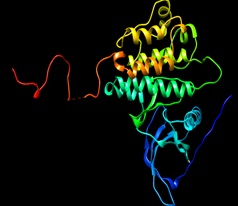 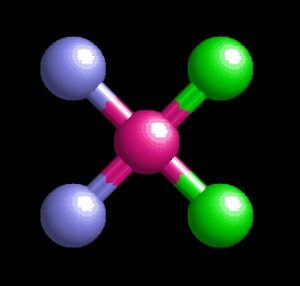 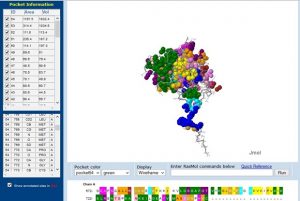 Interaction Studies: The goal of ligand-protein docking is to predict the predominant binding model(s) of a ligand with a protein of known three dimensional structure 29. To study the binding mode of canthin-6-one in the binding site of epidermal growth factor receptor (EGFR) tyrosine kinase (target enzyme), docking studies was performed and energy values were calculated from the docked conformations of the protein-inhibitor complexes. The target protein - EGFR tyrosine kinase with canthin-6-one and standard drugs was docked using an automated molecular docking server PATCHDOCK in order to find out how the chemical compounds inhibit the target protein structure EGFR - tyrosine kinase based on the negative binding affinities values 38 as shown in Fig. 4, 5, 6 and 7.

Docking studies yielded crucial information concerning the orientation of the inhibitors in the binding pocket of the target protein. The minimum binding energy indicated that the epidermal growth factor receptor (EGFR) tyrosine kinase (target enzyme) was successfully docked with canthin-6-one as showed in the Table 2 and Fig. 8. 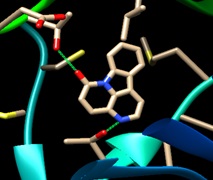 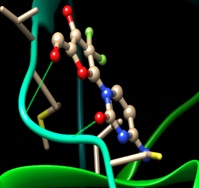 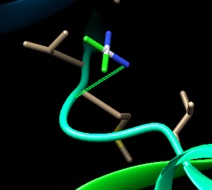 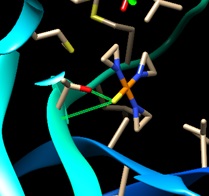 In the present in silico investigation, we elucidated one finding that we used the alkaloid compound (Canthin-6-one) derived from plant (Simarouba glauca) and found that this bioactive compound acted as potential anticancer agent for the target protein, namely, EGFR tyrosine kinase. Analysis of ligand binding interaction with the Epidermal growth factor receptor (EGFR) tyrosine kinase protein can be useful for new preventive and therapeutic drug for cancer. Based on the molecular drugs docking and binding affinities of the target protein EGFR tyrosine kinase with the ligands, it was found that the alkaloid Canthin-6-one has high binding values than the existing drugs Gemcitabine, Cisplatin, Thiotepa. The results obtained from this study would be useful in both understanding the inhibitory mode as well as in rapidly and accurately predicting the activities of new inhibitors on the basis of docking scores.

CONCLUSION: In this study, the molecular docking was applied to explore the binding mechanism and to correlate its docking score with the activity of Canthin-6-one compound. Docking studies of the Canthin-6-one with epidermal growth factor receptor (EGFR) tyrosine kinase showed that this ligand is good molecule which docks well with EGFR - tyrosine kinase target. The results are helpful for the design and development of novel drug having better inhibitory activity against various types of cancer. From this study, we conclude that Canthin-6-one is one of the best anticancer phytochemical agents. These potential drug candidates can further be validated in wet lab studies for its proper function.

ACKNOWLEDGEMENT: The authors are thankful to UGC for providing BSR fellowship as a part of financial support and the staff members of Department of Biosciences and authorities of Veer Narmad South Gujarat University for providing support to the study.