ABSTRACT: Molecular docking studies of 102 newly designed N-substituted imidazoles was performed in the non nucleoside inhibitory binding pocket of reverse transcriptase enzyme of wild type as well as resistant strains of HIV-1 virus with PDB ID 1RT2, 1JLB, 3BGR and 1FK9 respectively by using Glide 5.0 to carry out a binding mode analysis of the designed imidazoles. Results generated from this study indicate that most of the compounds dock into the active site of different enzymes such as 1RT2, 1JLB, 3BGR and 1FK9 showing excellent Docking scores comparable to the standard TNK 651. Compounds SRS 21, SRS 34, SRS 45, SRS 46, SRS 73, SRS 76 and SRS 77 exhibited the highest docking scores and were found to be most effective as compared to standard TNK 651.

Despite their chemical diversity, they assume very similar butterfly-like shape. The butterfly structure has a hydrophilic centre as a ‘body’ and two hydrophobic moieties representing the ‘wings’ 7. X-ray crystallographic studies reveals that NNRTI’s posses’s butterfly like’ conformation and appear to function as pi electron donors surrounding binding pocket. Presently three NNRTI’s namely nevirapine, delavirdine, and efavirenz are commercially available in clinical practice. Combination of these NNRTI’s with NRTI’s and protease inhibitors (PI’s) are used in the treatment of most cases of HIV infected patients. Three NNRTIs, nevirapine (Viramune1), delavirdine (Rescriptor1) and efavirenz (Sustiva1, Stocrin1) were approved for the treatment of HIV infection in 1996, 1997 and 1998, respectively. They became cornerstones of HIV therapy because of their full potential as a component of HAART 8. Nevirapine is also one of the few agents that are used to prevent mother-to-child transmission of HIV. In contrast to NtRTIs, they display a unique anti-retroviral activity spectrum that is limited to HIV-1 only.

The NNRTIs are non-competitive inhibitors that bind allosterically to an asymmetric and hydrophobic cavity, about 10 A° away from the catalytic site of the HIV-1 RT 9. As a result of NNRTI binding, certain RT domains that actively participate in DNA synthesis are restricted in flexibility and mobility which, in turn, leads to a dramatic reduction in catalytic enzyme efficiency 10. Recent studies also point to the interplay between the NRTI and NNRTI binding sites, possibly explaining the synergies between the two classes of RT inhibitors. Nevirapine (NNRTI) was one of the first medicaments with anti-retroviral activity to be treated against humans but that led to a rapid development of resistance associated with loss in clinical efficacy. The main side effect of nevirapine is the appearance of rashes, which are toxic in nature and in few cases Steven Johnson have been reported. While delavirdine and efavirenz generally used in combination and the main side effects are rashes, nausea, and loss of apetite, insomnia and strange dreams.

The NNRTIs nevirapine, delavirdine, and efavirenz (Scheme 1) have been approved for treatment of HIV-1 infection in combinations with other RT and non-RT drugs. As with all classes of anti-HIV-1 drugs, resistant viral strains evolve which severely impair the long-term efficacy of the NNRTIs. This limits the usefulness of NNRTI’s 11. Current anti-AIDS therapy is based on drugs that belong either to the class of nucleoside/nucleotide (NRTIs / NtRTIs) and non-nucleoside reverse transcriptase inhibitors. The nucleoside (seven drugs) and nucleotide (one drug) analogues (collectively known as nucleoside reverse transcriptase inhibitors [NRTIs] and nucleotide reverse transcriptase inhibitors [NtRTIs], respectively) are activated by host enzymes to their triphosphate forms, which bind to the active site of RT, where, acting as substrate decoys, they pre-terminate DNA chain elongation during viral DNA synthesis (Fig. 1). (NNRTIs), protease, or entry inhibitors. NNRTIs area structurally diverse group of compounds which interact with a specific allosteric non-substrate binding pocket site of HIV-1 RT (non-nucleoside inhibitor binding pocket), leading to a non-competitive inhibition of the enzyme 12.

Docking Strategies: Knowledge of the three-dimensional (3D) structure of ligand + protein complexes provides a valuable understanding of the function of molecular systems. The rate of protein structure determination is increasing rapidly. Today there are some 5,000 entries in the Brookhaven Protein Data Bank 13. The number of ligands available to assess and rationalize ligand protein interactions is large. Assuming the receptor structure is available, a primary challenge in lead discovery and optimisation is to predict both ligand orientation and binding affinity; the former is often referred to as ‘molecular docking’. Docking methodologies with novel extensions, and the diversity in both their complexity and computational speed provides a plethora of techniques to tackle modern structure based drug design problems 14, 15. The importance of docking in the field of drug design is that it increases computer power and docking performance, it is now possible to dock thousands of ligands in a timeline which is useful to the pharmaceutical industry 16.

Receptor Grid Generation: Shape and properties of receptor were represented on a grid by different set of fields that provide progressively more accurate scoring of ligand poses. Pick the ligand molecule and that was excluded from receptor grid generation. After that scaling of vanderwaals radii of non polar atoms which gave better interaction between receptor and ligand. Scaling of other interaction can also help to model flexibility of parts of the receptor. Appropriate method to determine how closely ligand bound with the receptor during docking procedure. 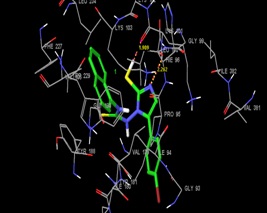 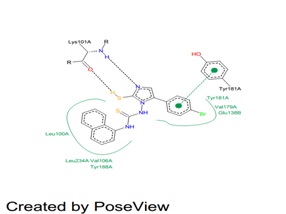 FIG. 1B: SCHEMATIC (2D) REPRESENTATION OF INTERACTIONS OF COMPOUND  73  IN THE BINDING POCKET OF THE PROTEIN

Active site amino acid residues are represented as lines while  the inhibitor is shown as ball and stick model with the atoms colored as carbon: green, hydrogen: cyan, nitrogen: blue, and oxygen: red. Hydrogen bond interactions are represented by pink dotted lines. (SHIMIDAZOLE RING ___COLYS101 = 1.909 A° and N of imidazole ring_NHLYS101 = 2.262 A°). Put the distance of H bond interactions as shown in sample here (Glide XP Score - 12.47). 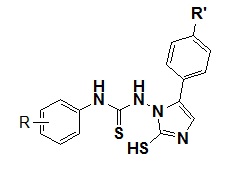 Docking studies: A large number of HIV protein crystal structures have been reported in the literature which has different conformations. In this work we have considered four crystal structures (PDB ID: 1RT2, 1JLB, 3BGR and 1FK9) that are co-crystallized with inhibitors TNK 651, Nevirapine, BHAP and Rilpivirine respectively. Docking studies were performed using Glide v5.0 on four high resolution crystal structures of HIV protein with their binding modes of quality and molecular interactions between differently substituted imidazole analogs and results of which are depicted in Table 1.

The reliability of the docking results was first checked by comparing the best docking poses obtained for the co-crystallized inhibitor with its bound conformation. This was done by removing each ligand from their active site and subjecting again to redocking into the binding pocket in the conformation found in the crystal structure. As a result, a root mean square deviation (RMSD) of 1.728 A°, 1.142 A°, 1.248 A° and 2.001 A° for HIV proteins PDB ID: 1RT2, 1JLB, 3BGR and 1FK9 co-crystalized TNK 651, Nevirapine, BHAP and Rilpivirine respectively were found suggesting that the docking procedure could be relied onto predict the binding mode of our compounds.

These interactions may be responsible for the binding affinity of the molecule as indicated by the docking scores - 12.47 comparable and more than the docking score - 12.04 of the reference ligand Tnk 651.

CONCLUSION: A number of newly designed imidazole analogs 1 - 102 were docked into the active sites of four crystal structures of HIV protein (PDB ID 1RT2, 1JLB, 3BGR and 1FK9) in order to investigate the possible interactions between the designed imidazole analogs and the active site of the non nucleoside reverse transcriptase protein HIV inhibitor protein. The binding mode analysis of the compounds with the highest docking scores was carried out and was compared with that of the co-crystallized ligands and co-crystalized TNK 651, Nevirapine, BHAP and Rilpivirine respectively.