ABSTRACT: Lung cancer is one of predominant cancer which leads to death in the developed and developing countries. 80% of lung cancer cases in India are reported as Non-Small Cell Lung Cancer (NSCLC). EGFR (Epidermal growth factor receptor) that belongs to the tyrosine kinase family (RTKs) is the key paradigm of molecular targeted therapy of lung cancer. Garlic (Allium sativum) is a common Indian spice that belongs to the Allium family, is capable of allowing cancer cell death normally, the process called apoptosis. The therapeutic effect of garlic is due to the presence of its bioactive constituents, including the organosulfur compounds and flavonoids. Molecular docking studies using AutoDock provide the comprehensive binding of bioactive compounds of garlic with EGFR that may lead to its effective inhibition. The current study paves the way for understanding the binding of garlic’s bioactive compounds against EGFR, and it can act as a potential lead molecule for the development of anti-cancer agents.

INTRODUCTION: Cancer is a collection of heterogeneous genetic diseases, and lung cancer is the second most common cancer in incidence which leads to cancer deaths in men and women. Lung cancer, also called lung carcinoma, is caused by the cells in the lung, which becomes abnormal and multiplies uncontrollably to develop into a tumor. Smoking is responsible for upwards of 80% of all lung cancers worldwide 1. Lung cancer is categorized into Non-Small Cell Lung Cancer (NSCLC) and Small Cell Lung Cancer (SCLC) depending upon its cell type.

NSCLC is categorized into adenocarcinoma, squamous cell carcinoma, and large cell carcinoma. NSCLC represents 80% of all lung cancers, with adenocarcinoma accounting for 40% of all cases of lung cancer 2. Epidermal growth factor receptor (EGFR) belongs to a family of receptor tyrosine kinases (RTKs) and can regulate signaling pathways to control cellular proliferation. Overexpression of EGFR has been reported and implicated in the pathogenesis of many human malignancies, including NSCLC 3.

Cancer chemoprevention refers to the use of phytochemicals derived from edible plants and their ability to interfere with a specific stage of the carcinogenic process. Garlic (Allium sativum L.) is one of the most important species that belongs to family Alliaceae and plant order liliales and has been used for their characteristic flavor and also for their medicinal properties for many centuries 4.

The beneficial effects of garlic are due to bioactive compounds of garlic, specifically the organosulfur compounds, which are responsible for the pungent flavor of garlic. Apart from these, garlic is also attributed to phenolic compounds which have beneficial pharmacological properties 5. The primary sulfur compound in the intact garlic are γ-glutamyl-S-alk(en)yl-L-cysteines are, which can be hydrolyzed and oxidized to yield S-All cysteine sulfoxide (alliin), a potent antioxidant which exhibits various medicinal properties. The enzyme alliinase gets activated when the garlic bulb is crushed, then the transformation of alliin to allicin occurs, which is the precursor to several sulfur-containing compounds. Allicin is highly unstable and instantly decompose to lipid-soluble allyl sulfur compounds such as diallyl disulfide (DADS) and diallyl trisulfide (DATS). Simultaneously, γ-glutamyl–S-alk(en)yl-L-cysteines are also converted to water-soluble organosulfur compounds, including S-allyl cysteine (SAC) and S-allyl mercaptocysteine (SAMC)  6.

Allicin, the main active compound associated with Allium sativum that has various anticancer activities and it has been identified as an anti-invasive agent for lung adenocarcinoma treatment 7. The anticarcinogenic effects of DADS and DATS have been extensively studied, and it was revealed that it induces cell death in human lung adenocarcinoma Cells via c-Jun N-terminal kinases (JNK) and mitochondrial-dependent pathway 8. Research findings have reported that allyl methyl-sulfide was uniquely effective among organosulfur compounds in inhibiting CYP2E1 protein in animal cancer models 9. Ajoene can suppress cell proliferation in a variety of cancer cells by inducing apoptosis 10. It has been reported that S-Allyl cysteine, a water-soluble compound act as a potential agent against the progression of human NSCLC in both in-vitro and in-vivo models 11. S- Allyl mercapto cysteine has been reported as a novel therapeutic agent for the prevention and treatment of human lung cancer 12.

Flavonoids are one of the most common groups of polyphenolic compounds which were found ubiquitously in plants. Approximately, 6000 flavonoids have been characterized in plants 13. These compounds have been found to have beneficiary effects in humans, because they can interact with some cellular targets, such as anti-inflammatory, antiviral, anti-oxidant and especially anti-cancer properties. Garlic bulbs also contain flavonoids like myricetin, quercetin, apigenin, kaempferol, nobiletin, tangeretin, rutin which was reported to have anticancer property 14. Higher concentration of myricetin, quercetin, and apigenin was found in garlic bulbs and have been reported earlier 15. Gorinstein et al. found only quercetin and kaempferol by HPLC analysis 16. Flavonoids like nobiletin, tangeretin, rutin contribute to pharmacological activity and modulate P-glycoprotein (Pgp) have been reported 13, 17.

Molecular docking approach is a new strategy in drug designing, which can be used to model the interaction between a small molecule and a protein at the atomic level, which allow us to characterize the behavior of small molecules in the binding site of target proteins as well as to elucidate fundamental biochemical processes 18. In the present study, the potential and binding affinity of garlic organosulfur compounds and flavonoids against lung cancer target protein were analyzed.

Preparation of Ligand: 3D structures of the most common organosulfur compounds and flavonoids present in garlic were retrieved from PubChem 19 database. The 3D structures of the compounds are shown in Fig. 1. Molsoft 20, an online tool is used to analyze the molecular properties of the compounds. The Ligands were exported to AutoDockTools as ‘Sybyl mol2’ format and processed using ‘Ligand' menu which fixes the torsion tree, non-polar hydrogens, charges, and atom types. 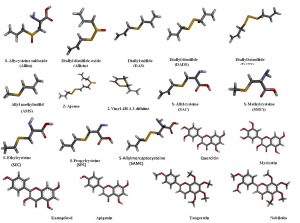 To compute the grid maps, AutoGrid 4.2 22 was used for setting a grid box of 90×90×90 Å (x, y, and z) and the grid spacing was set to 0.375 Å, such a way that it covers the complete ligand binding pocket.  The Lamarckian genetic algorithm was employed for docking calculations. In this docking protocol, the population size of 300 and a maximum number of evaluations, 27,000 were used to optimize the binding mode of Ligands for generating 100 independent LGA runs with 25000000 as the maximum number of energy evaluations. The output results were graphically analyzed by Discovery Studio 4.1.0 software 23 for the intermolecular interactions [hydrogen bonds, van der Waals and hydrophobic interactions] with the respective drug targets. 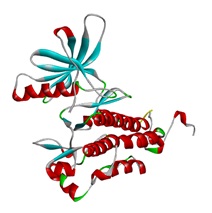 Garlic Organosulfur Compounds and Flavonoids: The biological effects of garlic were attributed to its characteristic organosulfur compounds. It can inhibit carcinogenesis in breast, colorectal, prostate and lung of experimental animals which was reported in previous research findings 24.

Research findings revealed that flavonoids had been extensively studied in-vitro and in-vivo experiments which give strong support to the anticarcinogenic activity of these compounds 25. In the present study, two groups of organosulfur compounds and flavonoids present in garlic were subjected to docking studies to understand the binding affinity of them against lung cancer target protein (EGFR).

The garlic compounds (organosulfur compounds and flavonoids) which were used for the in-silico study are listed in Table 1. After preparation, all the ligands were subjected to analyze the molecular properties of the compounds using Molsoft tool. The results indicate that all the compounds satisfy the Lipinski ‘Rule of five’ as illustrated in Table 1.

Docking Analysis of Organosulfur Compounds: Receptor EGFR tyrosine kinase is known to play a fundamental role in numerous processes such as cell growth, cell proliferation, and metabolism. Overexpression of EGFR through activation of oncogene and suppression of tumor suppressor gene can result in an abnormal functioning of signaling pathways which leads to a variety of cancers that correlate with poor prognosis and resistance to chemotherapy.

TABLE 2: BINDING ENERGIES AND CONFORMATIONS IN CLUSTER OF GARLIC COMPOUNDS

TABLE 3: HYDROGEN BOND INTERACTIONS WITH THE COMPOUNDS, NUMBER OF HYDROGEN BONDS FORMED AND THE DISTANCE BETWEEN COMPOUNDS AND EGFR PROTEIN

Docking Analysis of Flavonoid Compounds: Flavonoids contribute a major role in many mechanisms of action for prevention against cancer. Research findings show a significant association of high intake of flavonoid and reduced risk of lung cancer development. Reports revealed that the daily intake of 20mg of flavonoid was associated with a 10% decreased risk of developing lung cancer 26. The potential and binding affinity of flavonoids against lung cancer target protein were done using molecular docking studies. Among them, kaempferol shows the least binding energy of -7.47 kcal/Mol, and it shows five hydrogen bond interactions with GLN767, PRO770, ASP831, LYS721, THR766 with a hydrogen bond distance of 2.02, 2.57, 2.13, 2.20, 1.91 respectively and also forms hydrophobic interactions with LEU694, LEU820, ALA719.

The docked pose of Kaempferol with protein, hydrogen bond interactions and its 2D representation were visualized using DS visualizer Fig. 5.

CONCLUSION: Molecular docking provides a comprehensive insight into the binding of lead molecules with drug targets. Docking is highly acknowledged in the field of structure-based drug discovery, where docking is vital in the discovery of novel lead compounds. In the current study, the Molecular docking was performed between EGFR, the protein of interest, and the organosulfur/ flavanoid compounds of garlic for lung cancer therapeutics. Results indicate that the studied compounds show effective binding towards EGFR. Among these compounds, garlic flavonoids showed predicted free energy of binding when compared with water-soluble and lipid-soluble organosulfur compounds. Kaempferol showed satisfactory binding when compared with Alliin and S-Propyl cysteine. The most abundant compound of whole garlic bulb is Alliin, which shows better binding via hydrogen bond interactions with of -5.93 kcal/ Mol. S-Propyl cysteine, water-soluble compound also showed favorable interactions with EGFR. Further experiments are required to understand the molecular mechanisms of these compounds and validate them as a potential drug against lung cancer.

ACKNOWLEDGEMENT: The authors thank the management and the Principal of Dr. MGR Janaki College of women for providing necessary facilities, and Department of Biotechnology, Mother Teresa Women's University for their support.

CONFLICT OF INTEREST: The author(s), declare that there is no conflict of interest.