ABSTRACT: Obesity refers to abnormal or excessive fat accumulation in the human body which results in health risk. The aim and objective of the present study is to perform in-silico docking analysis of the phytoconstituents identified in two medicinal plants namely Cinnamomum verum (cinnamaldehyde, eugenol, cinnamyl acetate, caryophyllene and cinnamic acid) and Coriandrum sativum (nerolidol, geranyl acetate, decanol and linalool) on HMG CoA reductase an eznynme target for antihyperlipidemic activity. The phytoconstituents of the medicinal plants were retrieved from pubchem chemical database.  The target for docking study is selected as 3-hydroxy-3-methylglutaryl-coenzyme A (HMG CoA reductase). The 3D protein structure of the enzyme HMG CoA Reductase is obtained from Protein Data Bank [PDB ID: 3CCT]. In-silico docking analysis was performed by using Molegro virtual docker (MVD). The parameter used for docking analysis are MolDock score, Rerank score and hydrogen bond interactions. The docking score and the binding pattern of the phytoconstituents are compared against the standard drugs. The MolDock score of standard drugs atorvastatin, pitavastatin and simvastatin was found to be 182.685, -145.191 and -124.657 respectively. The MolDock score of phytoconstituents e – nerolidol, geranyal acetate, cinnamyl acetate and eugenol was found to be -90.2398, -88.2053, -81.3754 and -79.4759 respectively. It was found that the investigated phytoconstituents showed potent inhibiting activity as compared to that of the standard drugs as MolDock score directly reflects potential binding to the enzyme. The studied phytoconstituents show promise as antihyperlipidaemic leads and justify antiobesity claims of their source plants Cinnamomum verum and Coriandrum sativum.

INTRODUCTION: Obesity is commonly defined in adults as a body mass index [BMI > 30kg/m2] 1. Weight gain and obesity are major risk factors for conditions and diseases ranging from insulin resistance and type - 2 diabetic mellitus, cardiovascular diseases, and non-alcoholic fatty liver diseases, and with an increased risk of disability 2.

Obesity is associated with a modestly increased risk of all-cause mortality 3. Docking studies play an important role in the designing of new chemical entities for treatment of various ailments 4.

The phytoconstituents identified from this plant for the study were cinnamaldehyde, eugenol,, cinnamyl acetate, caryophyllene and cinnamic acid. Traditionally it is used to treat bowel complaints such as dyspepsia, flatulency, diarrhea and vomiting, digestive disturbances / digestive complaints such as mild spasms/cramps of the gastrointestinal tract/gastrointestinal colic, feeling of repletion/bloating, and flatulence/carminative 7. It has been evaluated for analgesic, antioxidant, anti diabetic, anthelmintic, anti tuberculosis activities and also used as chemotherapeutic agent 8 - 12.

Coriander (C. sativum L.) belonging to the family Umbelliferae/ Apiaceae is a glabrous aromatic, herbaceous annual plant, which has a long history as a culinary herb being the source of aroma compounds and essential oils with biologically active components possessing antibacterial, antifungal and antioxidant activities, and thus C. sativum is useful in food preparation (as a flavouring agent and adjuvant) and preservation as well in preventing food borne diseases and food spoilage. Coriandrum sativum is mainly cultivated from its seeds throughout the year. Phytoconstituents include linoleic acid, alpha-tocopherol, vitamin-k, nerolidol, geranyl acetate, decanol and linalool. It has been evaluated for anti-oxidant, anti-diabetic, anti-mutagenic, antihyper lipidemic, anti-spasmodic activity 13-17.

The lipid lowering effect of Cinnamomum species on experimentally induced hypercholesterolemic rats was studied by Rahman et al 18. Previous study has been carried out to evaluate the hypolipidemic effect of coriander for triton-induced hyper lipidaemia (biphasic model) in Wistar rats by Lal et al., 19. Further in Ayurvedic literature, the regular use of the decoction of the seeds of coriander is considered to be effective in lowering blood lipid levels 20.

The plant species showed potent anti-hyperlipidemic activity in in-vivo experiments and the present study is aimed to evaluate the effect of phytoconstituents using docking studies. The target for docking studies was selected as 3-hydroxy-3-methylglutaryl-coenzymeA (HMG CoA reductase). Hence it was planned to investigate effect of various phytoconstituents on HMG CoA reductase enzyme as a target protein using Molegro virtual docker (MVD). These docking score of the phytoconstituents are compared with the standard drugs i.e., atorvastatin, pitavastatin, simvastatin which are obtained from drug data bank.

Preparation of Enzyme: The target for docking studies was selected as 3-hydroxy-3-methylglutaryl coenzyme A reductase, an enzyme target responsible for anti hyperlipidemic activity. Docking analysis was done by initially selecting the target for the disease and followed by obtaining the 3D structure of HMG CoA reductase (3CCT) from protein data bank in .pdb format 23, 24. It is well known that PDB files often have poor or missing assignments of explicit hydrogen and the PDB file format cannot accommodate bond order information. Therefore, proper bonds, bond orders, hybridization and charges were assigned using the MVD. The potential binding sites of both the targets were calculated using the built-in cavity detection algorithm implemented in MVD. The search space of the simulation exploited in the docking studies was studied as a subset region of 25.0 Angstroms around the active side cleft. The water molecules are also taken in to consideration and the replaceable water molecules were given a score of 0.50.

Where Einter is the ligand-protein interaction energy, Eintra is the internal energy of the ligand

Re rank score: The re ranking score function used was computationally more expensive than the scoring function used during the docking simulation but it is generally better than the docking score function at determining the best pose among several poses originating from the same ligand. While the rerank score in MVD provides an estimate of the strength of the interaction, it is not calibrated in chemical units and it does not take complex contributions (such as entropy) into account. Even though the rerank score might be successful in ranking different poses of the same ligand, it might be less successful in ranking poses of different ligands.

RESULTS: The ability of the phytoconstituents to bind with the targets is given in terms of MolDock Score. The MolDock Score is used as the parameter for analysing the docking results. The phyto constituents are ranked according to their MolDock Score, rerank score and hydrogen bond interaction. The pose of the ligand which has least MolDcok score shows a strong affinity towards its enzyme target.

TABLE 1: RANKING OF LIGAND AND POSES BASED ON MOLDOCK SCORE

TABLE 2: RANKING OF LIGAND AND POSES BASED ON H-BOND

TABLE 3: RANKING OF LIGAND AND POSES BASED ON RERANK SCORE

In-silico docking results were supplemented with comparative graph in Fig. 1 to illustrate relative scoring of phytoconstituents and standard drugs. 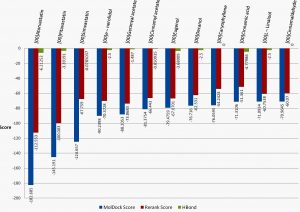 The Fig. 2 - 5 corresponds to the docking pose of atorvostatin, pitavastatin, e-nerodilol and geranyl acetate respectively, evaluated and captured by the ligand energy inspector tool in Molegro virtual docker. 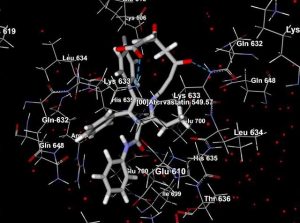 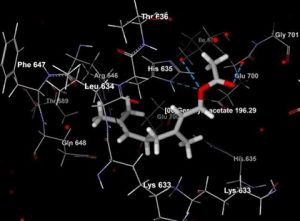 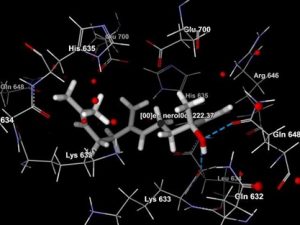 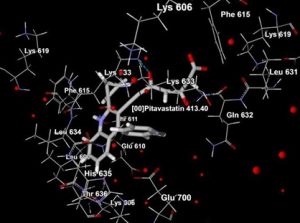 It is evident from the study that the phytoconstituents evaluated in the study posses drug likeness property except caryophyllen which posess a Lop value greater than 5.

DISCUSSION: Statins are evident to produce a variety of adverse effects such as cognitive loss, neuropathy, pancreatic, hepatic and sexual dysfunction and diabetes which is supported by evidence from many Randomized Controlled Trials 29, 30. This promotes the development of medicines from herbals in the alternative system of medicine suggesting the use of these herbs in day today life preventing the life style modifying diseases like obesity.

The phytoconstituent Geranyl Acetate has been patented for homeopathic composition comprising Hypericum perforatum extract and essential oils for the treatment of neuropathic Pain (Patent ID US2015374773). Geranyl acetate was identified as a volatile compound found in fresh, tree-ripened apricots and plumcots at concentrations of 4 and 3 ug/kg of fresh fruit tissue, respectively 31. It is a component of Balkan pine, Pinus peuce, twig oil from Greece at 0.7% 32. Geranyl acetate is a component of essential oils and occurs in varying amounts; up to 60% in oils from Callitris and Eucalyptus species, and up to 14% in palmarosa oil. A smaller amount occurs in, for example, geranium, citronella, petitgrain, and lavender oils 33. Moreover the chemical composition of essential oil from Blumea eriantha DC consists of both geraniol and nerolidol which is proved to possess antioxidant activity. Antioxidant capacity is correlated with atherosclerotic index and lipoprotein lipase activity 34, 35.

CONCLUSION: In conclusion, our results strongly favour the therapeutic use of phytoconstituents from Cinnamomum verum and Coriandrum sativum as a potential herb which can be consumed in our day today life for preventing hyperlipidaemia over the currently prescribed pitavastatin and atorvastatin, where these phytocontituents are free from any side/adverse effects. According to the terminology coined by Hippocrates, the father of western medicine “Food is medicine” the concept of taking these medicinal plants as food in day today life may prevent hyperlipidemic profile. Further research may be carried out to identify the exact mechanism of action through which the medicinal plants exhibited antihyperlipidemic activity.

ACKNOWLEDGEMENT: The authors thank the management of Sri Ramachandra University for providing us with all the facilities for the successful completion of the research.