INTRODUCTION: Epilepsy is the most prevalent central nervous system disorder. It is a chronic, usually life-threatening disorder which is associated with frequent seizures or convulsions and usually, episodes of unconsciousness and amnesia. Seizures are associated with the episodic high-frequency discharge of impulses by a group of neurons (sometimes referred to as the focus) in the brain.1 According to the report of the World Health Organization (WHO) about 50 million people worldwide suffered from epilepsy, out of which 80% of people live in low or middle-income countries. Approximately 70% of the time, people respond to treatment 2. Around 10 million people are overwhelmed by this disorder in India 3.

Main approach for epilepsy treatment is medication with antiepileptic or anticonvulsant drugs. However, a large number of anti-epileptic drugs (AEDs) such as topiramate 4, valproate 5, lamotrigine 6, tiagabine 7, felbamate 8, vigabatrin 9 were available in the market but the main concern is to reduce side effects and to improve efficacy as well as safety. Pyrrolidine-2,5-dione and its 1,3 substituted derivatives have appeared as the predecessor for pharmacological activity.

Also, their biological activities were reported as- anti-cancer 10, antinociceptive 11, antibacterial 12, anti-tubercular 13, anti-inflammatory 14, and neuroprotective agents 15. The new n-mannich bases derived from pyrrolidine-2,5-dione were answerable for antiepileptic activity due to its 3-methyl, 3-isopropyl and 3-benzhydryl substituent and chosen for docking studies. Anticonvulsant activity totally influenced by the type of substitution incorporated, especially at position-3 of pyrrolidine-2,5-dione. Because those molecules that possess a small electron donor methyl group or devoid of substitution at position-3 did not show any antiepileptic property and substitution at this position with benzhydryl or isopropyl group showed very good activity. Also, substitution at position-1 of imide ring with hydroxyethyl-, cyclohexyl-, methyl-piperazine or morpholine affects the antiepileptic activity because incorporation at this position led to active molecules 16-18.

Through the docking studies, lipophilicity and steric hindrance can be analyzed very effectively which majorly affects the antiepileptic property of newly synthesized N-mannich bases and its 1,3 substituted pyrrolidine-2,5-dione derivatives. With the help of mol dock score function, the experimental binding affinity of a protein-ligand complex can be assessed while the evaluation of the strength of interaction can be analyzed by the re-rank score in molecular docking.

Objective of Research: To study the binding affinity, binding interaction of new-mannich bases derived from pyrollidine-2,5-dione with the utilization of molecular docking.

Molecular Docking Study: From the Protein Data Bank, the protein molecule having PDB code: 1OHY was recovered 19 with the use of Molegro Virtual Docker (MVD) ver. 6.0, a program for determination of the best pose of protein-ligand binding interaction the docking studies performed. Through the calculated cavity detection the active site determined for the docking studies. During docking studies, the highest protein-ligand complex energy (mol dock and re-rank) score used for the determination of the binding mode of each ligand with the 1OHY active site.

For the most stable conformation, the energies of 3D structures were minimized through molecular mechanics (mm2) with the RMS gradient 0.0001 kcal/mol Å.

Docking Procedure: Firstly, appropriate selection and retrieving of protein molecule having PDB code 1OHY 15 was done from the Protein Data Bank. Then from the selected series of compounds, all the ligand molecules, protein structure with active chain and phenytoin were imported in the available workspace area of Molegro Virtual Docker (Ver.6.0). The basis of docking studies of protein-ligand binding is on the crystal structure of protein PDB 1OHY and ligand interaction. Then the elimination of all the solvent molecules, cofactors and co-crystallized ligands were done from the workspace.

Various parameters were selected for the docking studies such as mol dock optimizer, a number of runs fixed at 10, population size 50, maximum iteration 2000, and selection of cavity were a user-defined cavity. On the basis of two scoring functions i.e. mol dock score and re-rank score selection of ligand from docking wizard were made.

Escore is the summation of two energies represents the Mol dock scoring function 20-21:

Where, E intra is the inter energy of the ligand; E inter is the ligand-protein interaction energy.

Docking studies showed that Asp-415, Ser-403, Lys-442, Gln-395, Val-405, Arg-404, Pro-417 present in the protein structure of GABA are highly conserved and might play a very important role in substrate binding. Also, the binding affinity of standard drug phenytoin is reported to these amino acids. The negative docking energies of the ligands represented good and stable the binding interaction between the receptor and the ligands.

TABLE 2: COMMON TYPES OF H-BOND AND ELECTROSTATIC INTERACTIONS BETWEEN PROTEIN STRUCTURE WITH THE SELECTED COMPOUNDS AND REFERENCE DRUG PHENYTOIN 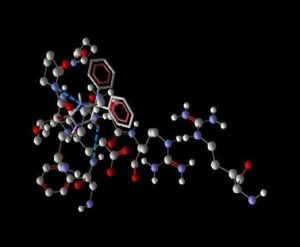 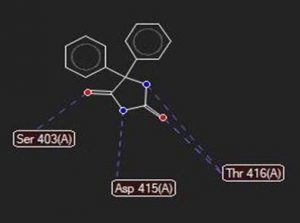 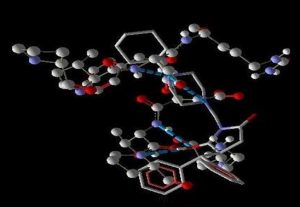 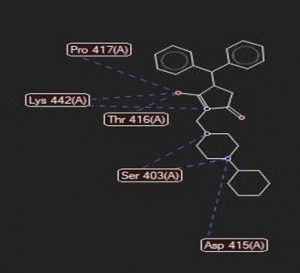 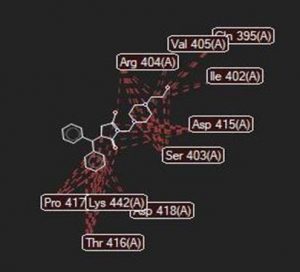 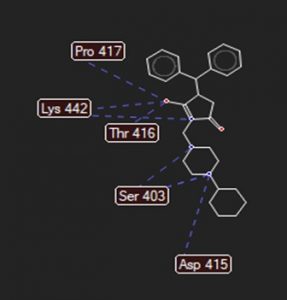 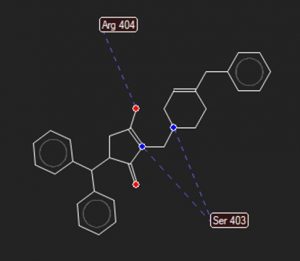 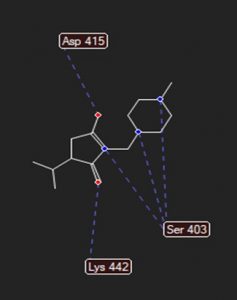 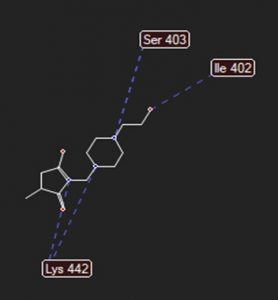 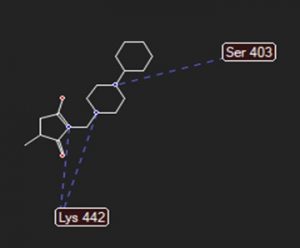 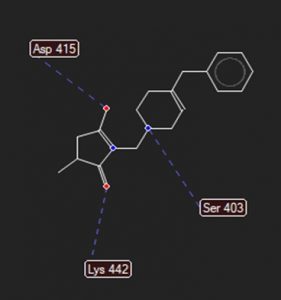 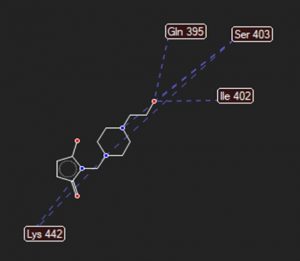 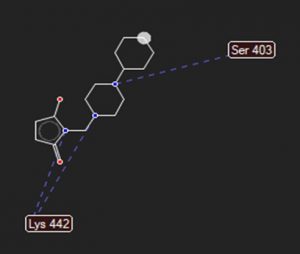 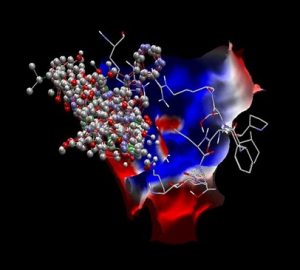 FIG. 15:  ELECTROSTATIC INTERACTION OF COMPOUNDS OF SERIES WITH THE PROTEIN (1OHY) 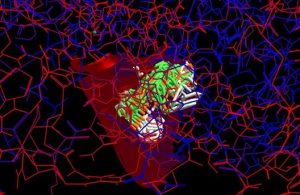 FIG. 16:  STERIC INTERACTION OF THE COMPOUNDS WITH PROTEIN (1OHY)

RESULTS AND DISCUSSION: To generate a correlation between the mol dock scoring function, structural properties and biological activities of the compounds against the 1OHY subunits of gamma-aminobutyric acid, the molecular docking was preferred. The basis of the analysis of results was protein-ligand complementarity with the consideration of steric and electrostatic properties.

On the evaluation of hydrogen bond formed between the above-mentioned compounds of the series and 1OHY active site, it was found that most of the compounds and reference drug phenytoin showed hydrogen bond formation with Asp-415 and Ser-403 amino acid. Also, on the analysis of electrostatic bond formed between mentioned compounds of the series and amino acid Asp-415, Ser-403, Thr-416, Lys-442, Gln-395, Val-405, Arg-404 and Pro-417 of 1OHY active site it was found that they showed more stable complex due to distance between the two aromatic rings is larger and steric hindrance is less. The final results of the above all interactions are mentioned in terms of three scoring functions that are mol dock score, re-rank score and hydrogen bonding against protein molecule having PDB code: 1OHY as listed in Table 1.

According to all the obtained values, the compounds showed a good affinity to the 1OHY active site higher than the reference compound phenytoin.

CONCLUSION: On the basis of scoring results it was concluded that the above mentioned compounds showed higher negative mol dock score and re-rank score in comparison to phenytoin. It was also observed that the standard drug phenytoin and the selected compounds have common hydrogen as well as electrostatic interaction by which more potent activity can be predicted. So, with the help of docking studies most potent structures of compounds can be designed with the effectiveness of time duration and cost and then the library of such compounds can be constructed.

ACKNOWLEDGEMENT: Moral and Educational support provided by the Swami Vivekanand College of Pharmacy, Indore under the Master Degree of Pharmacy for the year 2018-19, is gratefully acknowledged.

CONFLICTS OF INTEREST: In this research article, there is no conflict of interest.