ABSTRACT: The incorporation of Ordinary Portland cement with additional cementing materials is one of the most efficient methods to improve its microscopic properties. The aim of this work is to investigate the effect of metakaolin on Portland cement performance by using theoretical methods. 14 Å tobermorite was used as an alternative familiar molecular structure in representing Ordinary Portland cement. A constituting theoretical model has been constructed to describe the structure of Portland cement mixed with different ratios of metakaolin. This model was subjected to molecular dynamics simulations, and force field methodologies were employed to investigate the mechanical properties behavior. The results revealed an effective influence of metakaolin on the mechanical stiffness properties of Portland cement. The values of mechanical stiffness parameters (Bulk, Shear, and Young’s Modulus) were increased by increasing the metakaolin concentration.

INTRODUCTION: Ordinary Portland Cement (OPC) is one of the most common types of different cement materials and is considered a dominant material in construction industries. At high temperature, quartz, clay, limestone, shale, and iron oxides are all reacting together and then synthesis at high temperature, which is known as clinkering followed by cooling to produce OPC 1. The hydration in Portland cement chemistry is described as a series of chemical reactions. The mixing of cement powder with water generates a sequence of physical changes and thermodynamical processes 2.

Calcium silicate hydrates (C-S-H) are a principal product of cement hydration and participate as the main building blocks of concrete. C-S-H is an amorphous compound that has a different arrangement of CaO, SiO2, and H2O phases with different calcium/silicon ratios. The complicated nonstoichiometric structure of C-S-H left many problems to study 3. Incorporation of cement clinkers with other chemical additives has been regarded as a powerful method to enhance per-formance, get more economic benefits as well as protecting the environment.

Recently, many cementations materials have been used as substitutions portions in cement-based materials 4. Polyolefin fibers and silica fume in mixes with cement-based composites demonstrated an extra positive effect on the properties of paste cement 5. Micro-fillers named brick and glass powders achieved excellent values of flexural and compressive strength of concrete 6.

Sergey et al., described the mechanism of Al incorporation into calcium-silicate hydrate (C-S-H) for the development of novel cementitious materials with a lower CO2 7. The replacement of natural course of concrete with magnetite aggregates was evaluated by Afsaneh Valizadeh to obtain heavyweight concrete 8.

Metakaolin (MK) is classified as the most supplementary cementitious material (SCMs) without a detrimental impact on the environment. MK is an amorphous primary product of kaolinite, which exhibits strong pozzolanic properties. Production of MK by thermal treatment (calcination) of kaolin within 450 to 850 °C temperature ranges 9. There is a great interest in MK as one of the highly reactive chemical admixtures used to improve the intrinsic characterizations of concrete. Shrinkage and creep of concrete mixtures were reduced by partial replacement of MK at different concentrations up to 15% 10. The impact of MK incorporated in concrete mixtures leads to high strength concrete 11.

The reduction of CO2 emissions from Portland cement industries is the primary target for MK in addition 12. High reactivity MK led to lower porosity, denser microstructure, and best chemical corrosion resistance for concrete 13. The influence of the MK addition on Portland cement was mostly provided by experimental studies, and there is a significant lack of theoretical investigations in this framework.

Theoretical techniques have shown remarkable outcomes in the field of material science investigations, and they were extensively used for cement clinker studies. Molecular dynamics are the most dominant simulation method in cement studies 14, 15. In Molecular dynamics, the motion of molecule and atoms could be simulated at predefined parameter conditions, such as volume, pressure, temperature, and external forces. This is done by solving Newton’s equations of motion numerically for a set of atoms specified in an initial configuration 16. The Force field is the potential interatomic principle used to express the interaction between dissimilar particles in molecular dynamics. Many force fields have been formulated to figure parameters for all types of atoms in the specified system. For example, CFF, CVFF, AMBER, CHARMM, GROMOS, ReaxFF, and so many other types of known force field 17.

The main objective under the present work is to use molecular dynamics simulation to model the impact of MK at different concentrations on the mechanical properties of OPC. 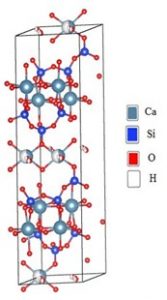 The structure of MK is mainly composed of silica (SiO2, 44.4-73%) and Aluminum oxide (Al2O3, 14.5–47.43%) 22. Mac Kenzie proposed a structural model in trying to depicture the MK by nuclear magnetic resonance and computer simulation studies. The lattice unit assumed in this model is shown in Fig. 2, in which the existence of residual OH groups (11–12%) incorporated in the Al-O layers was adopted 23. Xiao Yao et al. succeeded in revealing the geopolymerization process of MK activated by alkali and alkali silicate solutions by using MK lattice supposed by MacKenzie 24. Also, Olesia Mikhailova and Pavel Rovnaník used the same model to study the MK-based geopolymer, including different polymer admixtures 25.

4×4×4 supercell building structure of 14 Å tobermorite is shown in Fig. 3 (left). The number of Ca atoms in the supercell is the same number as Si atoms which achieve calcium/silicon ratio of 1.00. Based on previous studies, MK acts as a micro-filter occupies the gap spaces between cement particles to increase the density of the solid skeleton of the binder phase 26, 27. 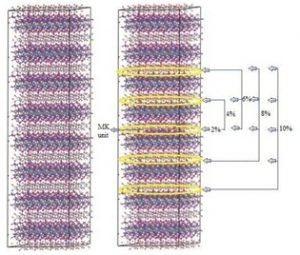 Computational Details: The molecular dynamics calculations were done by using Atomistix Tool Kit (Atomic-Scale Modeling for Semiconductor and Materials) 28. The interaction of atoms was described by employing Reax FF classical force field potential 29. The canonical ensemble NVT was used at finite temperature to find the global minimum with 5000 steps and time step set to 1fs. The mechanism to search the global minimum is known as annealing in which the temperature increases periodically from room temperature to target temperature, followed by decreasing the temperature once again to the initial temperature. Nose Hoover algorithm were considered to control the temperature. Finally, the deformed con-figuration became in thermodynamic equilibrium and ready for analyzing to determine elastic constants. The corresponding elastic moduli are obtained from the second derivative of the optimized structures. The bulk (K) and shear (G) were determined from the Voigt-Reuss-Hill (VRH) approximation 30.  The Young’s modulus (E) and Poisson’s ratio (ν) are determined through the following relations:

In the recent work of Jae Eun Oh et al., the bulk modulus of 14 Å tobermorite was determined experimentally by using high-pressure synchrotron X-ray diffraction 31, 32. In this work, the value of bulk modulus was 47 GPa with only 7.61 GPa greater than our investigated value. As for theoretical investigations, force field atomistic methods have been applied by H. Manzano et al. to evaluate the elastic properties of the most important phases present in cement pastes 33.

Among the results included in this work, the values of B, G, ν and E for 14 Å tobermorite (Ca/Si = 1.00) have yielded 33.7 GPa, 18.5 GPa, 46.92 GPa and 0.27 respectively, which is highly comparable to the findings set out here. The study presented by Ratan Mishra in the survey of force field database for cementitious materials (B= 44GPa, G=22 GPa, E=56.57 GPa and ν = 0.29) are very similar to the estimations in the current study 34. Also, the results obtained are considered reliable and very close to that reported by Shahsavari et al., (35.91 GPa, 20.61 GPa, 51.90 GPa, 0.25) with a percentage of difference less than 10% 35. The predicted bulk modulus values for MK -modified 14 Å tobermorite are displayed in Fig. 5. It can be noted that the value of bulk modulus increases along with increasing the MK amount. The increases are in a small rate of 2%, 4% and 6% of MK concentration. The maximum value (B= 69.21 Gpa) was achieved at 10% MK. The variation in shear modulus of 14 Å tobermorite corresponding to the variation content of MK is shown in Fig. 6.

The results indicated that, while the ratio of MK increased from 0 to 10%, the estimated shear modulus values increased from 20.12 to 31.43 Gpa. Fig. 7 illustrates the computed data of Young's modulus. Generally, the addition of MK gradually increases the values of Young's modulus similar to those of bulk and shear modulus, except for Young's modulus attains higher final increment at 10% MK compared to the initial value moduli of 14 Å tobermorite were found to be in a good agreement with both experimental results and previous molecular dynamics calculations.

The Bulk, Shear, and Young’s Modulus of 14 Å tobermorite increase with the increase of MK content from 2 to 10%. 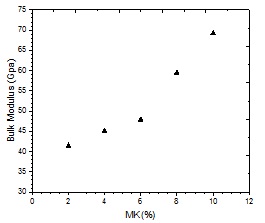 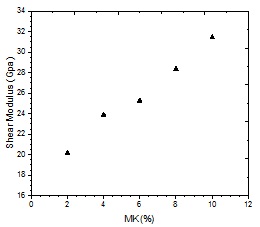 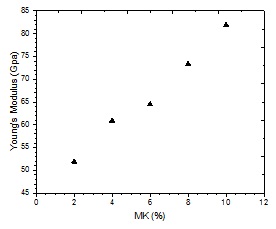