ABSTRACT: Background: Cancer is continuing to be a major health problem in developing as well as undeveloped countries. It is a leading cause of mortality worldwide, accounting for most of the deaths. Epidermal growth factor receptor (EGFR) is a transmembrane glycoprotein, and mutations that lead to EGFR overexpression or overactivity have been associated with a variety of human cancers. Purpose: In-silico design of EGFR inhibitors by inhibiting EGFR kinase activity which competes with its cognate ligands, and it may potentially constitute a new class of effective drugs in cancer therapy. Experimental work: In the present investigation, we have performed a similarity/sub-structure-based search of eMolecule database and find out promising benzothiazole derivatives as EGFR inhibitors by several screening criteria, including molecular docking and pharmacokinetics features. Result and Discussion: Molecular docking clearly showed that the final proposed derivatives potential to form a number of binding interactions. Molecular dynamics simulation studies showed that the EGFR protein becomes stable when proposed derivatives bind to the receptor cavity. Strong binding affinity was found for all molecules towards the EGFR, which was substantiated by the binding energy calculation using the MM-PBSA approach. Conclusion: The compounds with higher selectivity and great potential H6 and H7 have been reported, and it can be concluded that proposed molecules may be potential and safer chemical agents for therapeutic application in cancer therapy.

INTRODUCTION: Nitrogen containing hetero-cycles constitute an important scaffold in biological science and medicinal chemistry and has fascinating applications in drug discovery and development 1.

Benzothiazole derivatives have become a major area of emphasis for organic chemists due to a varied spectrum of pharmacological profiles for instance, antimicrobial 2, antimalarial 3, anticonvulsant 4, anthelmintic 5, analgesic 6, antidiabetic 7, and anticancer 8.

Cancer is the second major health problem worldwide for deaths. Epidermal Growth Factor Receptor (EGFR) is a transmembrane glycoprotein of the RTKs family, a key factor involved in cancer that controls the signal transduction pathways and cellular functions such as cell proliferation and survival adhesion, migration, and differentiation. Overexpression or overactivity of this EGFR because of mutations that lead to a variety of human cancers such as lung, colon, and breast cancers 9, 10. The binding of a ligand to EGFR induces conformational changes within the receptor, which increase its intrinsic catalytic activity of a tyrosine kinase and result in autophosphorylation, which is necessary for biological activity. Therefore, inhibitors of EGFR-inhibiting EGFR kinase activity by competing with its cognate ligands may potentially constitute a new class of effective drugs in cancer therapy 11, 12.

Ligand Structure Preparation: Similarity/sub-structure-based search of eMolecule database has been developed and used for further study against the target.

Docking Protocol: Using the gradient optimization algorithm and an empirical scoring function the molecular docking was performed to generate the best binding affinity or fitness of protein-ligand binding poses between tyrosine kinase protein and each benzothiazole. A molecular docking study for all compounds of benzothiazole derivatives was performed with AutoDdockVina tool 14. 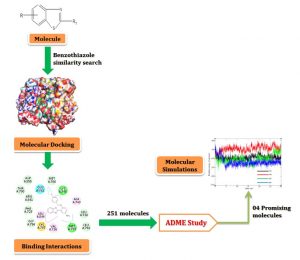 FIG. 2: GRAPHICAL REPRESENTATION OF IN-SILICO APPROACH FOR THE IDENTIFICATION OF HIT MOLECULES

In-silico Pharmacokinetic Study: Several important parameters such as drug-likeness properties, nature of lipophilicity, solubility and other physicochemical and pharmacokinetic profiles were computationally predicted for all best docked compounds whose binding affinity observed around -9.0 Kcal/mol in docking study.

Molecular Dynamic Simulation Study: Molecular dynamic (MD) simulation study is carried out to understand the dynamic behavior of protein-ligand complex. In the current study, the best-docked complexes between proposed molecules and EGFR were considered for MD simulation study using Gromacs 5.1.1 17.

For each docked complex 30ns of time span MD simulation was performed with a time step of 2 fs at constant pressure (1 atm) and temperature (300 K).

Substructure Search and Molecular Docking: All designed molecules were successfully docked, and to screen these molecules, the cut-off value of binding energy was considered as -9.0 Kcal/mol. Total 251 compounds were found to be satisfied the above condition. Pharmacokinetic profiling was done for all 251 molecules and found that 04 molecules showed good absorption and distribution. Among these, four molecules have been taken for study and further analysis 19. The 2D- representation of the concluded four promising molecules is given in Fig. 1.

In-silico Pharmacokinetic Study: The results of in-silico ADMET analyses of the most potent four compounds (H5, H6, H7, and H8) were evaluated for drug-likeness and physicochemical properties, water solubility (Log S scale) and pharmaco-kinetics profiles (gastrointestinal absorption), etc., and their results are represented in Table 1.

The ‘Lipinski’s rule of five’, which was crucially measured as drug-likeness profiles for all compounds, showed non-violation of the rule. OSIRIS Property Explorer predicted toxicity risks assessment profiles suggest that no indication of tumorigenicity, mutagenicity, irritating effect, and reproductive toxicity effect was found for the selected four compounds. The above findings explained that all four compounds have potential drug-likeness properties for exhibiting numerous numbers of pharmacological implications 20.

Molecular Docking: The binding interactions between designed molecules and catalytic amino residues of EGFR protein were explored from the best-docked pose.

Based on the obtained high negative binding energy of each molecule, it explained that all molecules are capable enough to bind perfectly at the receptor cavity of the EGFR. 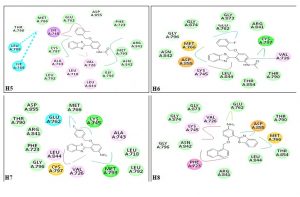 The 2D diagram of binding interaction showed a number of hydrogen and non-hydrogen bonding interactions among the designed benzothiazole molecules and catalytic amino acid residues of EGFR.

It was observed that Glu762, Lys745, Met793, and Cys793 was found to be important amino acid residue to interact with molecules via hydrogen bond interaction. The above findings unquestionably revealed that all proposed molecules are capable enough to form a number of crucial interactions with the catalytic amino acid residues of EGFR and favor the potentiality of the molecules as anticancer agents.

Bioactivity Prediction and Quality Assessment: In order to assess the quality of the proposed molecules, several parameters included inhibitory constant (Ki) based on binding energy derived from AutodockVina, (LE), LE scale (LEscale), fit quality (FQ), and LE-dependent lipophilicity (LELP). Values of all parameters are given in Table 2. The predicted inhibitory activity of all designed benzothiazole derivatives was found to be in the range of 0.2.37 to 0.092 µM. Therefore low Ki value of the molecules clearly explained that all compounds derived from the sub-structure searching approach have the capability to being lead molecules with high potency 21.

Another parameter, the ligand efficiency (LE) reported by Hopkins et al.  which can be calculated as the ratio between negative binding energy and number of heavy atoms (NHA) in a molecule 22. As per Reynolds et al., the LE cannot be estimated without molecular size; hence they have reported LE scaling (LE Scale), which enables a size-independent comparison of ligands with the help of an exponential function to the maximal LE values for a given NHA count. The fit quality (FQ) is the ration between LE and LE_Scale 23. It is illustrated that FQ values near one suggest close to ideal ligand binding. Finally, the ligand-efficiency-dependent lipophilicity (LELP) reported by Keseru and Makara was derived with regards to lipophilicity 24.

Molecular Dynamic Simulation: The 30ns time span of molecular dynamics study was performed to check the stability of the best-docked complex between proposed molecules and EGFR protein. To analyze the trajectories of the MD simulation, the RMSD, RMSF, and Rg were calculated and explored. The RMSD of all protein backbone from the complex was calculated and given in Fig. 4. The RMSD trajectories clearly showed that complex with all designed molecules was equilibrated in the range of RMSD value 0.0005 to 0.334 nm. The average, maximum, and minimum RMSD values of each complex are given in Table 3. These observations certainly explained that there was no much fluctuation of the backbone of the EFGR bound with proposed promising molecules. 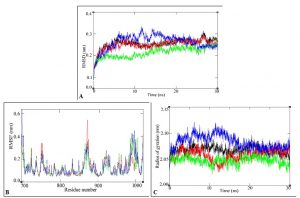 In the process of MD simulation, the fluctuation of individual amino acids can explain the stability of protein-ligand complex. Fluctuations of amino acid residues were explored using the RMSF parameters and plotted Fig. 4. To achieve the relative fluctuation, the maximum, minimum, and average RMSF were recorded and present in Table 3.

The observations clearly explained that amino acid residues do not much deviate from the original position. The rigidity of protein-ligand complexes can be explained using the radius of gyration (Rg) parameters obtained from MD simulation trajectories. The Rg values were recorded from the trajectories and plotted against time, and depicted in Fig. 4. The average, minimum, and maximum Rg values were calculated and presented in Table 3. The analysis of trajectories obtained from MD simulation study exhibited that all proposed molecules can form a stable complex with EGFR.

CONCLUSION: Similarity/sub-structure search of eMolecule database was performed to get important benzothiazole derivatives as promising inhibitors for the EGFR. All molecules were docked followed by pharmacokinetics, and synthetic accessibility checked. Finally, four molecules were found to be important as promising EGFR inhibitors.

The binding interactions were explored, and found that a number of hydrogen and non-hydrogen bonds were formed between proposed molecules and catalytic amino acid residues of EGFR.

A 30ns time span of MD simulations was performed. The RMSD, RMSF, and Rg values and MD trajectories of all complexes showed that each proposed compound formed a strong complex with the EFGR.

The compounds with higher selectivity and great potential H6 and H7 have been reported and it can be concluded that proposed molecules may be potential and safer chemical agents for therapeutic application in cancer therapy.

ACKNOWLEDGEMENT: The author would like to thank the Principal for providing the necessary facilities and motivating for this research work.