ABSTRACT: Thromboembolic disorders are the leading cause of human mortality. Therefore, development of effective anticoagulant therapy is critical. Factor XIIIA (FXIIIA) protein is a crucial factor in the blood coagulation cascade, and hence, it is a vital target for the evolution of new antithrombotic agents. Structure-function studies of clotting factor active sites, clot formation, and thrombus structure have gained prominence in the efforts to develop novel anticoagulants. Factor XIIIA was homology modeled with the human transglutaminase-2 crystal structure as a base template for BLAST analysis. Docking and comparative binding site analysis revealed active site residue conservation and inhibitor-protein interactions. Nineteen small molecules possessing suspected anticoagulant properties were successfully docked into the FXIIIA active site following the best CoMFA and CoMSIA prediction values. Dabigatran etexilate was anticipated to be the best FXIIIA inhibitor among the nineteen anticoagulants with the highest binding affinity for the FXIIIA protein, and the highest FlexX docks score of -29.8 KJ/mol. Structural properties of FXIIIA inhibitors with increased antithrombotic activity were predicted by this docking study.

INTRODUCTION: Many phenotypes are associated with thrombosis, and elevated levels of blood plasma coagulation factors are common 1. Blood flow restriction due to a blockage in arteries, veins, or capillaries leads to thrombosis, a condition where a blood clot formation occurs abnormally leading to life-threatening medical manifestations. The blockade that forms as a result of the blood clot is known as a thrombus.

The thrombus can mobilize, leading to an embolism known as a thromboembolism. Embolisms can circulate all over the body, causing paralysis, sepsis, and sometimes even death 2. Fibrin and platelets are crucial for the formation and stabilization of a blood clot.

Fibrin forms clots in veins whereas platelets form clots in arteries. It is well established that homozygous and heterozygous abnormalities occur at the genetic level 3-5. Thrombosis can be inherited genetically, acquired during life, or the interaction of both. According to Virchow, any obstruction in the blood flow, hypercoagulability, or injury to the blood vessel can cause venous and arterial thrombosis 6.

Slight imbalances in the dissolution pathways of fibrin and clot formation are considered to be the main cause of thrombosis 7. Thrombosis in its different forms like venous thrombosis, venous thromboembolism, arterial thrombosis, and pulmonary embolism cause serious life-threatening abnormalities including ischemic stroke, heart attack, deep vein thrombosis (DVT), cerebral vein thrombosis (CVT), and myocardial infarction 8. CVT and thrombus in the blood are associated with a high mortality rate and can occur due to extremely varied causes like hypercoagulability that progresses to malignancy, homocystinemia, and an abnormality in blood coagulation 8.

FXIII is a protein transglutaminase (TG) (PDB: 2Q3Z, www.pdb.org) (EC 2.3.2.13) that catalyzes an acyl transfer reaction. FXIII is an extracellular sulfahydralase zymogen also known as the Laki-Lorand factor 9, 10. Functional plasma FXIII has two B carrier subunits and two active A subunits collectively structured into a tetramer. FXIII inside the cell exists as a dimer with one A and one B subunit, both of which are produced in the bone marrow and hepatocytes, respectively. FXIII causes type-I and type-II deficiencies; type-I lacks A and B subunits, while type-II lacks the A subunit only 11.

Factor XIII (FXIII) levels and phenotypic polymorphisms play a major role in arterial atherothrombosis and venous thromboembolism (VTE). FXIII in its activated form, FXIIIA regulates proper clot formation and disassociation. FXIIIA 'A' chain of 626 amino acids (EC 2.3.2.13, UniProt: B4E2L8_Human, www.UniProt.org) is a fibrin-stabilizing factor (FSF), a fibrinoligase that is functional in the final stages of the blood coagulation cascade. It regulates blood homeostasis by crosslinking α and γ chain monomers forming homopolymers. FXIIIA has numerous roles in maintaining vascular permeability, in stabilizing extracellular matrix of bone and cartilage, as well as maintaining homeostasis during pregnancy, wound healing, and angiogenesis 12. In addition to its varied roles, the most important function of FXIIIA is its cardioprotective effect.

Lack of FXIIIA also leads to a rapid atrial rate enhancing the chance of stroke in the left atrium due to thrombosis, or thromboembolism 1.

Improper FXIIIA function leads to obstructive blood clots that cause microvascular thrombosis (MVT) and multi-organ dysfunction syndrome (MODS) 13. FXIIIA inhibits thrombus formation by preventing the binding of platelets to cross-linked fibrin. There are two pathways that control blood coagulation homeostasis by regulating extrinsic and intrinsic pathways in the human body.

Thrombotic disorders are of prime concern because they account for about 500,000 deaths in Europe and up to 300,000 deaths in the United States (US) every year. Initially, heparin was the only anticoagulant prescribed in the twentieth century, but it was found to have a variety of side effects including hypersensitivity, bleeding after halting therapy, nausea, vomiting, hives, and breathing trouble 14. Antithrombotic drugs function in two ways: as anticoagulants that decrease fibrin formation and as antiplatelets that inhibit clot formation by platelets 15.

Anticoagulants prevent clot formation, mobilization, DVT, and PE. Hence, it is important to search for novel anticoagulant molecules. Antithrombotic therapy has been widely implemented as a remedy for conditions like DVT, CVT, and CAD. Antithrombotic therapy is also found to be effective in treating patients with heart abnormalities such as atrial fibrillation (AF) and strokes 15.

In the current study, we employed molecular docking studies to elucidate the binding affinity of potential anticoagulant inhibitors to the FXIIIA active site and to provide structural evidence for blood clotting FXIIIA inhibitors to help facilitate the design of antithrombotic agents Fig. 1. Anticoagulants bind at the active site of FXIIIA to inhibit blood coagulation. Numbers in Fig. 1 denote the following sequence of steps in the inhibition process.

Step 2: Disassociation of B subunit from FXIII (B) active site (AS) in the presence of cofactor (Ca2+) and amine γ glutamyl transferase (E).

Step 3a: Binding of anticoagulant molecules (AC) to the active site of FXIIIA (AS).

Step 3b: Activated FXIIIA (A) with free active site (AS) is available to crosslink fibrin monomers.

Step 4: AC changes the conformation of FXIII (A) thus out competing for fibrin and preventing blood clot formation.

Step 5: In the absence of an inhibitor, FXIIIA forms a blood clot in the presence of thrombin activation factor (TA) and fibrin (F). 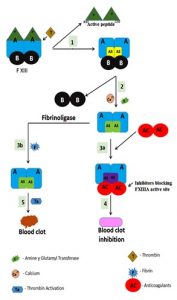 Comparative modeling was used to generate a three dimensional (3D) structure for human FXIIIA (UniProt ID: B4E2L8) blood coagulation protein to provide structural data on ligand-protein complexes and to analyze the interactions at the molecular level. The homodimer crystal structure of the human transglutaminase-2 (PDB code: 2Q3Z) was used as a base template to construct the 3D model of FXIIIA.

Sequence alignment for both the query and the template sequences was performed using ClustalX analyzer, and Modeller 9.10 software was utilized to construct 3D models, and SPDBV software was used to perform loop building of amino acid residues that exist in disallowed regions.

Geometry Optimization and Molecular Docking: Protein-ligand binding exhibits high specificity and is very important for many biological processes. FlexX interfaced with SYBYL 6.7 was employed to estimate binding interactions by docking a set of 19 anticoagulant compounds into the active site of the FXIIIA. In SYBYL 6.7, the flexibility of ligands is considered while the protein is considered as a rigid structure. In this automated program, each new fragment is added to the base fragment in all possible angles and confirmations at the active site.

Nineteen natural compounds with anticoagulant property were selected from an earlier report and employed in this study. pIC50 (-log IC50) values for all the compounds were derived from IC50 and biological activity data reported in the literature 19-22. Chemical structures of these 19 small compounds exhibiting anticoagulant activity were drawn in SYBYL and were geometrically optimized using default parameters and convergence criterion of 0.001 kcal/mol Table 1 23.

SYBYL 6.7 interfaced with the FlexX fast; automated docking program was used to trace out the probable binding conformations of these 19 inhibitors around an active radius of 6.5Å17. Default FlexX docking parameters were employed to obtain the docking scores. Binding interactions were further examined based on the best-docked conformation. Information on the structure and energetics of molecular complexes were obtained using SYBYL-FlexX.

Structure and Activity Relationship (SAR) Studies: Three-dimensional quantitative structure-activity relationship (QSAR) studies based on comparative molecular field analysis (CoMFA), and molecular similarity indices in comparative analysis (CoMSIA) methods were carried out for the set of 19 molecules to determine their activity as potential antithrombotic agents. CoMFA utilizes tripos force field with a distance-dependent dielectric constant in all interactions in a regularly spaced (2 × 10-10 m) grid taking an sp3 carbon atom as a steric probe and a +1 charge an an electrostatic probe. The cut-off was set to 30 kcal mol-1. CoMSIA utilizes Gaussian-type distance-dependent dielectric constant to minimize changes in atomic positions and charge potentials at the grids. CoMSIA calculates using a C+ probe atom with a radius of 1 × 10-10 m placed at a regular grid spacing of 2 × 10-10 m to enclose all the binding conformations of the inhibitors. The pIC50 data will couple 3-log units offering a wide and similar set of data for 3D-QSAR analysis. Compounds were divided into test and training set in a 1:3 ratio to improve the predictively of the 3D-QSAR models. Cross-validation and partial least score (PLS) analyses were used where the cross-validated co-efficient (q2) leaving an optimal number of components and lowest standard error of prediction was considered for the accuracy determination of the predicted models 24.

The Molecular Modeled Protein showed an Effective 3D Structural Conformation with PROCHECK Analysis: The final model generated in this study was evaluated using PROCHECK. Ramachandran plot results Fig. 2 emphasized that 87.1% of the amino acids were located in the most favored region, and approximately 12.2% and 0.5% of amino acids were located in allowed and generously allowed regions, respectively. Only one amino acid (Leu-377) was in the disallowed region, suggesting a better structural conformation than the base template Fig. 3. 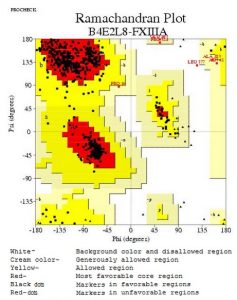 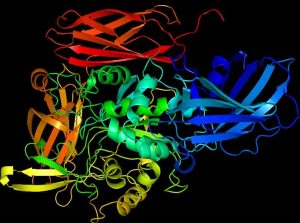 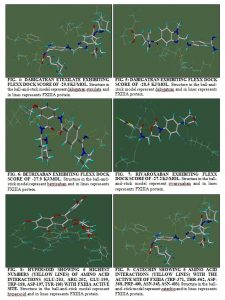 The 19 molecules docked into the active site of blood coagulation FXIIIA protein (B4E2l8) exhibited consistent amino acid interactions. The FlexX dock scores with interactions of the residues and their distance from the FXIIIA active protein to the anticoagulant ligands are indicated in Table 2.

Quantitative Structure-Activity Relationship Study (QSAR) Results Indicate a Better Fit Between FXIIIA and the Anticoagulants, and PLS Statistical Analysis Supports the Accuracy of Predicted and Docked Models: CoMFA and CoMSIA studies support the accuracy of predicted and docked models. PLS, the statistical analysis with multivariate regression and LOO cross-validated PLS analysis was employed to deduce the 3D QSAR models. Employing default SYBYL CoMSIA and CoMFA parameters on all the 19 compounds set with the multifit molecular alignment resulted in a PLS model with average q2 values, r2 values, SEE, and F-values Table 3. These results signify stability and robustness in the CoMFA and CoMSIA QSAR models, confirming the structural and functional relationships of docked FXIIIA with those of anticoagulant molecules indicating a good protein-ligand fit Table 3.

CONCLUSION: In-silico comparative 3-dimensional modeling and structure-activity relationship studies on anticoagulant FXIIIA inhibitor molecules are increasingly prominent because of their potency to act against thrombosis.

The anticoagulants tested in the current study illustrate the mechanism of small molecules that form bonds with the active site of FXIIIA, making them unavailable to trigger the blood coagulation cascade. We have predicted these natural compounds to be the best antithrombotic drug candidates because of their strong affinities with the active site of the FXIIIA.

Furthermore, in-vivo studies performed employing antithrombotic therapy using this information as a base will aid in the elucidation of therapy that is specific to thrombosis.

ACKNOWLEDGEMENT: This work was made possible by the NM-INBRE program grant P20GM103451 from the National Center for Research Resources. This publication was also supported by an internal research grant awarded by the Department of Biology, Eastern New Mexico University, Portales, New Mexico, USA.