ABSTRACT: The present study explains computational methods to design 3D structure of “Cytochrome P450 4A11” of Homo sapiens enzyme using the sequence available from Uniprot (Uniprot KB - Q02928). Homology modelling study was performed to generate a 3D model of Cytochrome P450 protein. The model was developed by using Modeler 9.17 software tool. The developed model was further docked with already existing drugs using the Autodock 4.2 software. After designing the model molecular docking studies were performed by using Autodock 4.2 with 5 drugs to identify the functional effect of protein. The developed model shows above 91 % of the amino acids in most favoured region. All the drugs show good binding energy and interactions. The compound olanzapine shows highest binding energy of -7.86 kCal/mol with interacting Gly453. These studies provide understanding and interpreting the data produced by these methods. It explains to understand molecular interactions at the active site region.

INTRODUCTION: Cytochrome P450 is the main enzyme involved in the oxidative metabolic pathways of many drugs 1. In many cases inhibition of CYP leads to undesired growth of the administered therapeutic agent. These are the powerful oxidizing agents in living systems, therefore many drugs can be oxidized by more than one P450 enzyme 2. CYP450 enzymes play an important role in endobiotic and xenobiotic metabolic processing 3. CYP450 interprets for about thirty percent in the human hepatic metabolism of xenobiotics and also interprets or more than 50 % of drug metabolism. CYP enzyme may have additional interesting pharmaceutical applications. CYP450 enzymes catalyze a huge number of biological reactions 4.

CYP450 has three subfamilies viz., CYP1, CYP2, and CYP3. CYP’s contribute largely to the oxidative biotransformation of xenobiotics that include most drugs, dietary chemicals, and environmental pollutants 5. Brinzolamide, [(R)-(+)-4-Ethylamino-2-(3-methoxy propyl)-3, 4-dihydro-2H Thieno [3,2-e]-1,2-thiazine -6-sulfonamide-1,1-dioxide], is a new active substance which is useful only for topical use in the treatment of glaucoma. It is used to lower intra‐ ocular pressure in patients with open ‐ angle glaucoma or ocular hypertension. There are UV 6 and HPLC 7 methods available for simultaneous estimation of brinzolamide and timolol. Several analytical methods based on UV, RP-HPLC, HPTLC, LC-QTOF-MS/MS 8 methods were reported for the determination of brinzolamide alone.

Olanzapine chemically known as 2-methyl-4- (4-methyl-1-piperazinyl)-10H-thieno [2, 3-b] [9-13] benzodiazepine, is an atypical antipsychotic agent, also known as second-generation antipsychotic (SGA) 4. Since its introduction in 1996 in over 84 countries, several workers have reported HPLC methods for the determination of OLP in plasma, serum, human breast milk and rat brain 14 - 18. A survey of literature showed HPTLC 19, UV 20 and linear voltammetry 21 have reported for the assay of OLP in pharmaceuticals.

Vilazodone IUPAC Name is 5-(4-[4-(5-cyano-1H-indol-3-yl)butyl]piperazin-1-yl) benzofuran-2 carbox amide. It belongs to the category serotonergic antidepressant. Vilazodone was approved by the FDA for use in the United States to treat major depressive disorder in January 21, 2011. Vilazodone acts as a serotonin reuptake inhibitor and 5-HT1A receptor partial agonist. It has negligible affinity for other serotonin receptors such as 5-HT1D, 5-HT2A, and 5-HT2C 25. There are very few methods reported for the determination of vilazodone viz. UV 26 method, spectrofluorimetric and also a RP-HPLC 27 methods were reported for its estimation in bulk and pharmaceutical formulation.

Celecoxib is chemically 4-[5-(4-methylphenyl)-3-(trifluoromethyl) pyrazol-1-yl] benzenesulfonamide and is a diaryl substituted pyrazole. It is a non steroidal anti-inflammatory drug (NSAID), which is a specific cylooxygenase 2 (cox-2) inhibitor. A survey of literature showed HPLC 28, LC 29 and UV 30 methods for the estimation of celecoxib alone in pharmaceutical preparations and in simultaneous determination of celecoxib and diacerein by absorption correction method and chemometric 31 method. It was also estimated by Tandem Mass spectrometry method 32.

In the present study, an effort was made to generate the 3D structure of the cytochrome P450 4A11 (Uniprot accession number: Q02928) from Homo sapiens. Modeller 9.17 was used for the homology modelling. The model was validated by using Procheck. Present study could provide useful information to get the functional characterization of these enzymes. Molecular docking studies were performed by using drugs derivatives like brinzolamide, olanzapine, donepezil, vilazodone, celecoxib.

Homology Modelling: The amino acid sequence of cytochrome P450 4A11 was retrieved from Uniprot 33. A three dimensional model was generated for “Cytochrome P450 4A11”. A sequence similarity search was performed to identify the structural similarity of the query sequence by using Protein Blast 34 tool by selecting database against Protein Data Bank (PDB) for identifying template for homology model building 35. The template was identified on the basis of smaller the E-value, >30% identity, maximum score. 5T6Q protein was selected as a template for modeled protein. Comparative sequence alignment studies were performed with query and template structure using Clustal X tool and online Clustal W tools 36.

Modeller 9.17 software was used to develop the model. It is an automated approach to comparative modeling by satisfaction of spatial restrains 37. To align the query and template sequences manually the input file of alignment. Ali was used in Modeller 9.17. After completion of alignment twenty models were generated and all the generated models were thermodynamically minimized using molecular dynamics and simulation approach. By implementing Modeller 9.17 auto-model class, calculated 3D models of the target automatically.

The best model which is having smallest value was selected on the basis of lowest objective function.  It is also known as normalized Discrete Optimized Molecule Energy (DOPE) score. Generate model was then checked in detail for protein structure stereochemistry including Ramachandran plot and Psi/Phi angles using Procheck 38.

Molecular docking studies were performed to explain the binding mode of proteins and drugs. All the existing drugs were docked by using Autodock 4.2 software 40. All the molecules were docked individually in Autodock 4.2. The modelled three dimensional structure of Cytochrome P450 4A11 protein was imported to Autodock 4.2 and structurally optimized by adding hydrogens to protein allocated with kollaman charges 41. After adding the hydrogens the model was saved in PDBQT format, later ligands were prepared by optimizing the torsion angles and saved them in PDBQT format. A grid was generated around to identify XYZ coordinates (X=71.434, Y=47.507 and Z= 56.155), around binding site of cytochrome P450 4A11 protein. Lamarckian genetic algorithm (LGA) was selected for freezing, docking and default parameters used in autodock 4.2. 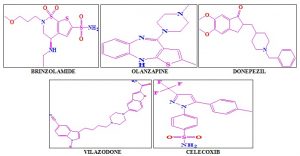 FIG. 1: STRUCTURES OF ALL THE DRUGS USED IN DOCKING STUDIES

RESULTS AND DISCUSSION: After sequence alignment and homology modeling cytochrome P450 4A11 shows highly conserved regions in amino acid sequences. The most homologous template for building a homology model for cytochrome P450 4A11 was identified through protein blast algorithm. Based upon the homology search, crystallographic structure of cytochrome P450 4B1 (CYP4B1) complexed with octane: An n-Alkane and fatty acid omega-hydroxylase with a covalently bound heme (PDB entry: 5T6Q) was selected as a template. Twenty models were generated using modeler 9.17 program. The alignment file was tweaked manually to excellent fit in the sequences. After the generated models for all the primary sequences, the model with least object function was selected for further protein stereochemistry evaluation (phi and psi angles) with procheck software. Fig. 2 and 3 shows super pose of model and template structures with backbone trace and the cartoon of homology derived protein of cytochrome P450 4A11.

The three (Ø, Ψ and ω) backbone torsion angles are important determinants of a protein fold.   Procheck software generates a number of scatter plots, these are known as Ramachandran plots. These plots show complete residue by residue data and the assessment of the generally excellence of the producing structure as compared to well refined structures of the same resolution.

Molecular docking of drug compounds into the binding site of a receptor and estimating the binding affinity of the ligand is a most important part of the structure based drug design process. The molecular docking results indicate that all of the studied alkaloid compounds occupy an almost similar space in the binding site. Olanzapine shows best possible binding mode against modelled CYP450 protein is illustrated in Fig. 4. During the molecular docking procedure, the program selects only best fit active site pocket of the protein with respect to the ligands in order to dock them. AutoDock 4.2, provides information on the binding orientation of ligands at the active site region.

The docking program place both ligand and protein in different orientations, conformational positions and the lowest energy confirmations which are energetically favorable are evaluated and analyzed for interactions. Free energies of binding (ΔGb) and dissociation constants (Ki) as calculated by AutoDock are summarized. 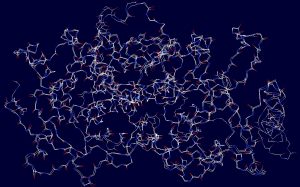 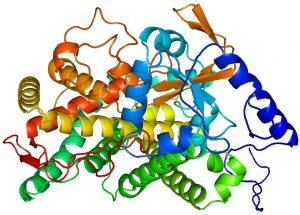 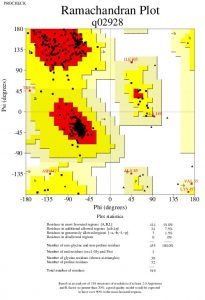 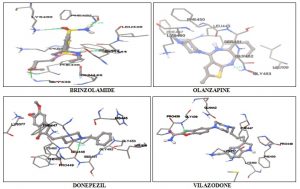 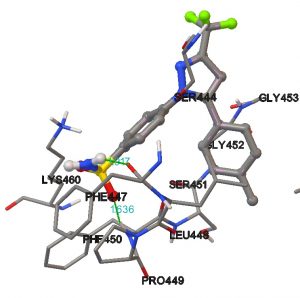 CONCLUSION: In this work, homology modeling and molecular docking studies were performed to explore structural features and binding mechanism of existing drugs as cytochrome P450 4A11 inhibitors, and to construct a model for designing new cytochrome P450 4A11 protein. Homology derived model statistics are similar to template i.e., crystal structure. Docking the modelled protein with drugs provided insight into the binding and interaction with the enzyme. Further, the structure based drug discovery process along with protein information of drug targets may improve our understanding towards in-sight of mechanism of protein-ligand interactions and their binding patterns.