The spreading of HIV strains in the human population acquired at the time of treatment and leads to drug resistance 1.

Modelling of Mutant Structures: Modelling of the mutant’s structure was performed using SWISS-MODEL 8-9. PyMol was used to change the amino acid residue at the specified position in the wild type HIV-1 RT sequence (PyMol, USA). For the prediction of mutant structures, the wild-type sequence of HIV-1 RT (PDB ID: 1IKW) was used as a template and validated through PROCHEK analysis 10.

Molecular Docking of Wild Type and Mutants with First-line Anti-retroviral Drugs: To evaluate the conformational changes of these mutations with respect to the Lamivudine, Nevirapine, Efavirenz and molecular docking was performed and the binding energy was calculated.

In the docking structure of the RT mutant type (M184V)-lamivudine complex, the RT backbone amino acids Isoleucine 244 and Tyrosine 271 were involved in an interaction with lamivudine through hydrogen bonds with a bond length of 2.72A0 and 2.93A0. The amino acids Lysine 311, Proline313, and Glutamine 242 were involved in the Vander Waals interaction with lamivudine. The RT wild-type lamivudine binding energy was -5.940 kcal/mol, whereas the RT mutant M184V-Lamivudine was -6.49 kcal/mol.

In addition, this type of docking model was generalized to explain the RT resistance to all nucleoside inhibitors with B-L stereochemistry. The wild-type and mutant model will be helpful in implications in drug design.

From the docking study in the reverse transcriptase gene of HIV-1, we suggested that the mutation in the 184 position affects the amino acid-binding of the entire RT gene with lamivudine. The positional amino acid changes in the RT gene of HIV-1 affect lamivudine binding during therapy.

The details of the above discovery studio structure are given in the supplementary Fig. 1, 2, and 3. 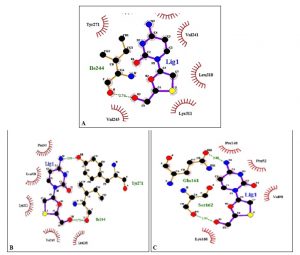 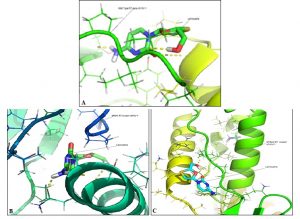 Molecular Docking of Nevirapine/Efavirenz Complexes with Y181C, H221Y and G190R M230I RT Mutants of HIV-1: In the docking structure of the RT wild-type-Nevirapine complex, the RT backbone of the two amino acids at positions 167 and 168 were involved in hydrophilic interactions with nevirapine. The RT backbone amino acids Tyrosine188, Tyrosine181, Leucine 100, Valine179, Glycine198, Lysine101, Proline 236, Histidine235, Val106, Tyrosine 318, Phenyle 227, Tryptophan229 and Leucine234 were involved in the hydrophobic interaction with nevirapine.

Tyrosine188 and Tyrosine181 is involved in Pi-bond interactions between the aromatic ring of the nevirapine. 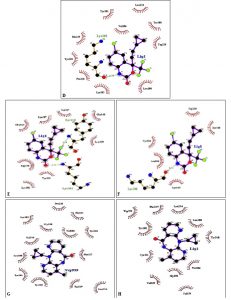 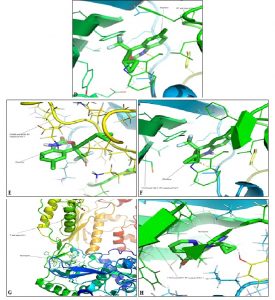 The amino acids Lysine102, Lysine101, Glycine190, Tyrosine181, and Tyrosine188 were involved in electrostatic interactions with efavirenz.

The docking study of this NNRTI drug resistance in clinical isolates can exploit these observations to design more effective drugs, strategies of drug administration, and highlight their mechanisms of action more efficiently. The binding energies of the RT mutant type (Y181C and H221Y)-Nevirapine complex were -6.70 kcal/mol, and the binding energy of the RT mutant type (Y181C and H221Y)-Efavirenz complex was -8.95 kcal/mol. The docking study of RT wild type-Efavirenz complex highlighted the hydrophilic interaction of Lysine 101 with lamivudine and was shown to have a 2.75A0 bond length between the oxygen atom of lysine and the nitrogen atom of lamivudine.

The amino acids Lysine103, Proline236, Tyrosine 318, Hisdine235, Tyrosine181, Valine106, Leucine 234, Tyrosine188, Tryptophan229, and Leucine100 were involved in hydrophobic interactions with lamivudine.  But in a docking study of the RT mutant (G190R and M230I) with the Efavirenz complex, the amino acid Lysine 102 interacted with the aromatic ring of the lamivudine with the bond length of 2.91A0.

DISCUSSION: HIV drug resistance is the ability of HIV to mutate and reproduce itself in the presence of antiretroviral drugs. The outcome of this HIV drug resistance leads to treatment failure and further spread of drug-resistant HIV. This scenario ultimately can compromise the effectiveness of the limited therapeutic options. To overcome this situation, proper planning for regimen selection should be prioritized through mutation-guided regimen approach. Lamivudine has been shown to be highly effective in the treatment of HIV-infected patients. A single mutation at amino acid position 184 changes to Valine and confers resistance to Lamivudine 14, 15.

The novel idea of drug-nucleotide interaction on a specified position of mutation and showed the novelty of interaction that can favor a suitable drug binding on the specific position of the reverse transcriptase region of HIV-1 16. Treatment with a combination of antiretroviral therapies has resulted in a dramatic decrease in mortality due to AIDS. The 2’, 3’-dideoxy-3’-thiacytidine (3TC Lamivudine) is a nucleoside reverse transcriptase inhibitor.

For RT Lamivudine mutants at positions M184V and M184I, we found that Isoleucine and Valine were involved in intermolecular and hydrophobic interactions with lamivudine. These two amino acids are involved in steric hindrance with the side chain of lamivudine. In a previous study, the fitness of these genotypically altered viruses was selected through drug pressure by giving nevirapine treatment, and the nevirapine resistance mutations were analyzed 17. The docking study of H221Y with efavirenz/ nevirapine could be a new idea or novel approach to design a more effective drug substitute for NNRTI to suppress the H221Y mutation as the arrangement of amino acids was revealed.

Nevirapine inhibits the reverse transcriptase activity and replication mechanism of HIV-1 through noncompetitively binding to the conserved tyrosine residues at 181 and 188 of the p66 subunit of the RT gene 18, 19. The Nevirapine resistant virus contains a tyrosine to a cysteine mutation at residue 181 that is cross-resistance to other non-nucleoside reverse transcriptase inhibitors 20. The novel mutations L74V and H221Y frequently, often with Y181C, share its ability to increase NNRTIs resistance mutations 21.

The structurally predicted nevirapine/efavirenz mutations observed in our study might give us lead to the design of competitive drug molecules that can bind to the reverse transcriptase gene of HIV and inhibit virus replication in the human host. The crystallographic structure of H221Y with NNRTI have not yet been reported. A lower in binding energy was observed in the Y181C and H221Y mutants compared to the wild type was observed. From the above docking study of Y181C and H221Y mutants, we observed that two NNRTI drugs uncompetitively bind to the RT gene during the replication cycle leads to treatment failure. Thus, the binding energy could have an impact on chain synthesis during virus replication.

The molecular mechanism and crystallographic study of M230I and G190R mutations with NNRTI binding have not yet reported. There is no reported evidence about the molecular mechanisms of Nevirapine/Efavirenz binding in M230I and G190R RT mutants. Our docking study provided the structural information on various types of amino acids involved in the M230I and G190R RT mutants of HIV-1.Overall, the molecular docking of the various drug-resistant mutants towards first-line antiretroviral drugs provides suitable information on NRTI and NNRTI drug design that can work even the mutation occurs in a specified position.

CONCLUSION: The docking study and structural prediction of these mutations by computational approach would be helpful in new drug discovery in HIV research.

CONFLICTS OF INTEREST: We do not have any conflict of interest.