ABSTRACT: Mimusops elengi L. is an Indian origin herb used in the Unani and other traditional systems of medicine since long time. It is commonly called by the names Spanish cherry, West Indian Medlar or Bullet wood tree. This plant is frequently cultivated throughout India especially in north India for its ornamental appearance and fragrant flowers. All parts of plant such as leaf, root, fruit, seed, bark, flower of Mimusops elengi were reported for treatment of various human ailments in traditional system of medicine. Pharmacological activities like antimicrobial, antifungal, antioxidant and free radical scavenging, anti-inflammatory analgesic, antipyretic, antiurolithiatic, cytotoxic, diuretic, neuroprotective, anti-amnesic, cognitive enhancing, antihyperglycemic, antihyperlipidemic, hypotensive, antiulcer, anthelmintic, antitumor, wound healing, larvicidal activities have been scientifically evaluated for various parts of this plant. A number of phytochemical constituents have been identified in this plant that may be responsible for its pharmacological activities. So many articles are available on Mimusops elengi L., but from Unani literature the discussion is very limited. This review is an effort to summarize the detailed prospects of ancient Unani literature on Mimusops elengi L. along with modern researches. Further studies should be done to make this drug world widely acceptable

INTRODUCTION: Molsari (Mimusops elengi L.) is a large glabrous evergreen Indian origin tree attaining a height of 12-15 m distributed in peninsular region, western and eastern ghats and cultivated in the plains e.g., tropical forests in south Asia and in India. Plant is cultivated for its ornamental appearance, elegant look, shade and for fragrant flowers.1 The Plant has vast description in Unani literature as Molsari. It is described as large tree like mauwah, kherni and cheeku.

This tree gives characteristic cool shade and fragrant flowers. Leaves are dark green, pointed and shiny. The tree bark is blackish. Small, white color, fragrant flowers grow on its branches. Its flowers are also known as bhara maranand as fragrance of flowers attracts bumble bees (bhanwara) toward it. Flowering time is from April to June every year and fruiting time is from May to September. Fruit is round, smooth, shiny, 0.75 inch long and get yellowish after ripening. Fruit is sweet with slight bitterness in test. 2 It is also are considered as a sacred plant among Hindus. Mimusops elengi flowers as symbol of love and beauty.3 M. elengi is used in the Unani and other traditional systems of medicine since long time. Medicinally various parts of M. elengi were reported for treatment of several human ailments.4

Habitat: Mimusops elengi is native in India, Myanmar and Sri Lanka but cultivated across the tropics including Malaysia, Singapore, and Australia. It is cultivated in South India and central India especially in Madhya Pradesh, Jammu, Bihar, Mewad Awadh forests and Andaman Islands.6

Suchetra Sen et al., isolated two new pentacyclic triterpenes, mimusopgenone and mimugenone  from its seeds and characterized as 2β,3β,23-trihydroxy-28-noroleana-5, 12-dien-16-one and 3β, 23- dihydroxyoleana - 5, 12 – dien – 16 - one, respectively, based on their spectroscopic properties.13

In another study Lavaud et al., isolated six saponins from the seed kernel of Mimusops elengi.

Oil: The composition of the total fatty acids of the oil is as follows: palmitic, 10.97; stearic10.10; behenic, 0.46; oleic 63.98; and linoleic,14.49%.16 In a study by Sehgal et al, high performance thin layer chromatography method for detection and quantification of quercetin in Mimusops elengi leaves was developed. The method provided a rapid and easy approach for detection and quantitation of the bio-marker quercetin.17 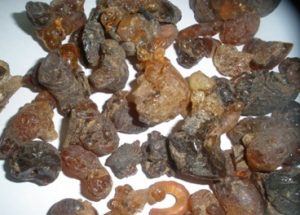 Pharmacological Activities: Following studies are carried out on different parts of this plant:

IC50 value of the reference standard ascorbic acid was 58.92μg/ml. Total antioxidant activity was also found to increase in a dose dependent manner. M. elengi extract also showed strong reducing power. Study proved that it act as a chemo-preventative agent offering effective protection from free radicals. 27 In another study antioxidant capacities of the phenolic compounds extracted from immature, mature and ripe fruits of Mimusops elengi were investigated. The antioxidant capacity of each fraction was determined by radical scavenging (DPPH and ABTS) assays. The antioxidant capacity values of these fractions, expressed as gallic acid equivalents (GAE) by ABTS assay for immature and mature fruits were in the range of 13.5 ± 0.1 -441.7 ± 4.8 mg/ g extract with relative capacities being F2 > F3 > F1. The GAE values for ripe fruits were in the range of 192.3 ± 1.0 – 212.5 ± 4.6 mg/g extract with relative values of F2 ≈ F3 > F1. This study showed that Mimusops elengi fruits is a good source of natural antioxidant. 28

In another study Petroleum ether, chloroform, and alcohol extracts of bark were evaluated for antiurolithiatic and antioxidant activity in male albino Wistar rats. Oxalate, calcium, and phosphate were monitored in the urine and kidney. Serum BUN, creatinine, and uric acid were also recorded. In vivo antioxidant parameters such as lipid peroxidation (MDA), glutathione (GSH), superoxide dismutase (SOD), and catalase (CAT) were also monitored. All the extracts of M. elengi were found safe orally and exhibited no gross behavioral changes in the rats. In hypercalculi animals, the oxalate, calcium, and phosphate excretion grossly increased. However, the increased deposition of stone forming constituents in the kidneys of calculogenic rats were significantly (P < 0.001) lowered by curative and preventive treatment with alcohol extract. It was also observed that alcoholic extract of M. elengi produced significant (P < 0.001) decrease in MDA, increased GSH, SOD, and CAT.32

The antibacterial activities of both aqueous and ethanolic extracts of leaf were screened against medically important bacterial strains by using both agar disc diffusion and agar well diffusion methods. The ethanol extracts were more potent than aqueous extracts

The petroleum ether, acetone, methanol and water extracts of bark were tested for their antibacterial activity against five dental infection microorganisms such as Staphylococcus aureus, Streptococcus mutans, Streptococcus salivarius, Streptococcus sanguis, Lactobacillus acidophilus and Candida albicans by well diffusion method. Methanolic and aqueous extracts showed greater activity as compare petroleum ether and acetone extracts because more phytoconstituents were leached in it. Petroleum ether, ethyl acetate, methanol, kanamycin solvent extracts of bark, fruits and leaves were screened for their antibacterial against some pathogenic bacteria. Fruit extracts were less potent against most of the tested organisms compared to those obtained from bark and leaves and were inactive against the fungus Trichoderma viride. Leaves extracts displayed good activity against Bacillus subtilis and Trichoderma viride and were inactive against Helminthosporium sativum. 50

It contains a number of phytoconstituents, which are the key factors in the medicinal value of this plant. Further investigations should be carried out to isolate and characterize the specific active components of this plant which are responsible for these actions. Almost all parts of this plan such as leaf, fruit, seed, bark and flowers are used to cure a variety of diseases. As its importance is explained in classical literature and modern science, no doubt it is a blessed drug, but it’s therapeutic activity needs explanation. As the world is looking towards new drugs from natural sources, it elicits on all aspects of herb and throws the attention of the researchers to carry out the work for developing the new formulations which can be beneficial for the treatment of various ailments

ACKNOWLEDGMENT: The author conveys immense gratitude to the staff of library and herbal garden and Department of Ilmul Saidla National Institute of Unani Medicine, Bangalore for their continuous support and inspiration.

CONFLICT OF INTEREST: The authors have no conflicting financial interests.