ABSTRACT: AIM: To monitor the adverse drug reactions due to various antidepressants prescribed in patients coming to psychiatry OPD with depression at a tertiary care hospital in northern India. Methods: This was a prospective observational longitudinal study conducted for a period of 12 months in a tertiary care outpatient facility. Patients who fulfilled the inclusion and exclusion criteria and those who gave informed consent were recruited. The antidepressant prescribed to the patient was noted and the patient was followed for a period of 6 months for complaints of any adverse effects. Results: A total of 96 patients were monitored for adverse drug reactions. ADRs were only recorded in the SSRIs group of patients of which only escitalopram and sertraline were prescribed to patients. 20.8% of the patients developed adverse events of which the most common were nausea, followed by a headache. Other observed adverse events that were recorded were anxiety, dry mouth, vomiting, somnolence, fatigue and sexual dysfunction. Conclusions: Prevention of adverse drug reactions occurring due to antidepressants can be achieved by patient education, reassurance, constant follow-up and monitoring.

INTRODUCTION: Depression is characterized by persistent sadness and a loss of interest in activities that a person normally enjoys and the inability to carry out daily activities, for at least two weeks. Depression may be accompanied by several of the following: loss of energy; change in appetite; sleeping more or less; anxiety; reduced concentration; indecisiveness; restlessness; feelings of worthlessness, guilt, or hopelessness and thoughts of self- harm or suicide.

Around 300 million people globally are affected by depression. The World Health Organization (WHO) names depression as the single largest contributor to global disability. Depression is also the highest contributor of suicides (nearly 8 lac per year) 1. Females are at a higher risk (5.1% vs. 3.6% in males) which can be attributed to socio-economic stress which includes abuse, income, and education. The highest incidence is recorded between the ages of 55-74 years in both males as well as females which can be attributed to health issues, loss of a closed one, loneliness and economic problems.

According to a recent study by a world mental health survey, 10-15% of people will experience the major depressive disorder in their lifetime 2. The lifetime prevalence of being afflicted with all the depressive disorders taken together is 20%. Heritability accounts for only 35% of the etiology, while other causes include environmental factors such as childhood associated emotional, sexual or physical abuse 3. With rapid socio-demographic transition coupled with developmental changes such as globalization, urbanization, industrial-ization, economic development, rural to urban migration and modernization, the incidence of depression is estimated to rise 4.

The mainstay for the treatment of major depressive disorder includes cognitive behavioral therapy and antidepressants. Antidepressants are said to be as effective as a psycho-social intervention and cognitive behavioral therapy in cases of mild and moderate depression. Antidepressants have been proven to be efficacious when compared to placebo in terms of acute treatment of severe grade of depression as well as melancholic depression. Furthermore, in maintenance studies comparing antidepressants to placebos, although anti-depressants have been more effective in preventing relapse when compared with placebos, however, whether the antidepressant is able to provide long-term prophylactic protection is unclear and requires more research 5. A longitudinal observational cohort study determined that antidepressants significantly reduced the risks of suicide attempts and suicides by 20% 6. Independent predictors of poor remission (HAM-D score less than 7) at 6 months included being unmarried, numerous previous hospitalizations and poor physical functioning 7.

The Various Classes of Antidepressants, as well as their Adverse Effects, Include:

Reversible Inhibitors of MAO-A: These include moclobemide and clorgyline. Side effects of MAO inhibitors can be classified as early and late. Those appearing early include dizziness, drowsiness, insomnia, orthostatic hypotension, transient increase in blood pressure immediately after dose and nausea. Slow titration, division of doses and an increase in fluid intake can ameliorate orthostatic hypotension. In order to prevent insomnia, changes in the timing of drug intake can be done. Side effects appearing late include edema, weight gain, muscle pain, paraesthesia, myoclonus, and sexual dysfunction. Paraesthesias may be treated with pyridoxine supplementation 8.

Selective Serotonin Reuptake Inhibitors (SSRIs): SSRIs have a favorable side effect profile when compared to tricyclic antidepressants. Common side effect includes nausea, vomiting, headache, nervousness, insomnia, and sexual dysfunction. These are of mild intensity and undergo tolerance with the continuation of treatment 10. Apathy, weight gain, and disturbances in appetite are some other adverse effects that are encountered 11.

Serotonin Nor Epinephrine Reuptake Inhibitors (SNRIs): Commonest adverse effect encountered is nausea. Other side effects include dry mouth, constipation, and sweating. Venlafaxine causes an increase in blood pressure that is dose-dependent. Duloxetine may cause hepatotoxicity that may have fatal consequences 12.

Atypical Antidepressants: Mirtazapine promotes drowsiness and sleep and is hence dubbed as “sedating antidepressant”. It also causes weight gain. It has a low propensity to cause sexual dysfunction. Trazodone also results in sedation. Bupropion causes induction of seizures at high doses. Bupropion is not related to sexual dysfunction or weight gain; rather it is associated with weight loss and hence must not be given to patients with eating disorders. Vilazodone and vortioxetine have a lower risk to cause weight gain and sexual dysfunction. Vortioxetine additionally also has a lower risk of causing sedation 13.

METHODS: This prospective longitudinal observational study was carried out in the Department of Pharmacology and Therapeutics in collaboration with the Department of Psychiatry at King George’s Medical University, Lucknow, Uttar Pradesh. The data collection for this study was commenced only after gaining ethical approval from the institutional ethics committee (Reference Code: 90th ECM II B-Thesis/P25).

The total duration of the study spanned 12 months from July 2018 till July 2019. Patients who were diagnosed as a major depressive disorder under the ICD10 criteria by the physician were approached. Patients qualifying all inclusion without having any exclusion criteria were enrolled after taking written informed consent. A record was made regarding the antidepressant prescription of the patients. The patients were followed for a period of 6 months after the first visit for any adverse effects. The pharmacotherapy for the patient for the current major depressive disorder was solely decided by the physician in the manner of the prevailing standard of care. No payment or reimbursement for treatment was received by the patient for participation in this study.

RESULTS: Ninety-six patients were recruited in the 12-month study observation period. The age range of all patients was 18 to 69. Most of the patients belonged to the 21-40 year age group, followed by 41-60 year age group and the majority were females Table 1. In our study, 89.6% of the patients were given a selective serotonin reuptake inhibitor (SSRI). Within the SSRI class of drugs, only two drugs were prescribed namely sertraline (43%) and escitalopram (57%). 7.3% of the patients were given serotonin-norepinephrine reuptake inhibitor, of which the only two drugs prescribed were desvenlafaxine and duloxetine. Other drugs that were prescribed were mirtazapine and amitriptyline Fig. 1. Additionally, anxiolytics were given concurrently to 95.8% of the patients. The commonest benzodiazepine prescribed was clonazepam. Other anxiolytics prescribed were etizolam, lorazepam and other fixed-dose combinations that included either two benzodiazepines, or a fixed-dose combination with propranolol which is also known to relieve anxiety. Z-class hypnotics that were concurrently given included zolpidem. 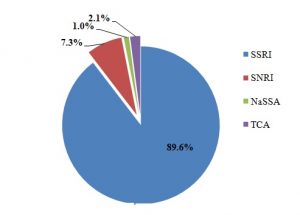 When followed for a period of 6 months, only 20 patients (20.8%) developed an adverse event while undergoing treatment. The total number of recorded adverse events were 33. The average number of adverse events per patient was seen to be 1.6. The age range for ADRs was seen to be 18-66. The age group which was maximally associated with adverse drug reactions was 20 - 40 years of age group. 70% of the patients experiencing ADRs were females whereas 30% were males Table 1.

TABLE 1: DISTRIBUTION OF STUDY POPULATION ACCORDING TO DEMOGRAPHIC VARIABLES AND ADRS

23.3% of patients who were given SSRI developed an adverse event. The incidence of adverse events for patients on sertraline was 37.83% while that of escitalopram was 12.24%. The adverse drug reactions involved the neurological, gastro-intestinal, genitourinary and ant cholinergic systems. The most common among all the adverse events were nausea (40%), followed by headache (30%) and anxiety (20%) in Table 2. Other adverse effects that were noted were dry mouth, vomiting, somnolence, fatigue and sexual dysfunction. In other groups of antidepressants, no adverse events were noted probably since the number of patients in each subgroup was very less Fig. 2.

TABLE 2: NUMBER AND TYPE OF ADRS

DISCUSSION: Adverse drug events due to antidepressants can affect the treatment outcome by affecting the tolerance, adherence and outlook of the patient. In a study done on 160 patients on antidepressants in Odisha by Mishra et al., 14, similar to our study, 26.87% reported ADRs and in those patients who were prescribed SSRIs, 28.57% developed an adverse drug reaction. ADRs were most seen in the 36 to 50 years age group. Adverse drug reactions involved the following systems: cardiovascular system, neurological, genitourinary and gastrointestinal system. Overall, the adverse drug reactions that were recorded were fatigue, sweating, postural hypotension, dry mouth, nausea, loss of appetite, headache, tremor, agitation, nervousness, anxiety, urinary hesitancy, and sexual dysfunction. The ADRs related to SSRIs included insomnia, blurring of vision, fatigue, sweating, dry mouth and nausea, loss of appetite, headache, tremor, agitation, nervousness and sexual dysfunction.

In Lucca et al., 15 that took into account both in patients and out-patients, around 42.39% of the 401 patients studied developed ADRs; SSRIs resulted in most of the ADRs (53.92%). The average number of ADR per patient was 1.2. The commonest ADRs due to SSRIs seen were dry mouth and diaphoresis. The median age for developing ADRs was seen to be 36.5 years (range 13 to 84 years).

A study conducted in Karnataka by Munoli and Patil, which monitored patients prescribed antidepressants for ADRs 16, reported that 19.8% of all patients developed an adverse drug reaction. The highest incidence of ADRs was seen in imipramine (20.5% developed ADRs), followed by amitriptyline (17%) and sertraline (15%). Escitalopram accounted for a 30% incidence. ADRs were seen to be more common in females (69.2%) and in the age group 21 to 40 (61.5%).

This finding was similar to our study. The common ADRs due to SSRIs encountered in the study conducted in Karnataka 16 included: Forsertraline-insomnia, imbalance, and diarrhea, for fluoxetine-insomnia, anxiety, diarrhea and weight gain and for escitalopram -insomnia and weight gain.

Lavakumar reported that the antidepressants that were prescribed to patients included fluoxetine (most commonly prescribed), escitalopram, sertraline, mirtazapine and venlafaxine. Fluoxetine was seen to be associated with gastritis, nausea, vomiting, and sexual dysfunction. Mirtazapine was seen to be associated with sleep disturbance as well as weight gain. Of all ADRs, the commonest ADRs due to antidepressants seen in a tertiary care hospital were categorized under gastrointestinal ADRs (57.5%) such as nausea, vomiting, gastritis and dry mouth. The other ADRs that were reported were sexual dysfunction, weight gain, giddiness, cutaneous reactions and sleep disturbances.

Si T et al., 18 reported in their research studying patients with severe depression that 28.38% had a treatment-emergent adverse effect of which commonly seen adverse effects with the use of escitalopram were somnolence (9%), nausea (7.7%), hyperhidrosis (4.5%), dry mouth and dizziness (4.1%) 18.

Fisher et al., 19 in their paper mentioned that one in every 3 patients who were prescribed sertraline developed an adverse event. Sertraline related adverse events included gastrointestinal, neurological, psychological, dermato-logical, urinary and sexual complaints.

CONCLUSION: 20.8% of the patients developed adverse events of which the most common was nausea, followed by a headache. Other observed adverse events that were recorded were anxiety, dry mouth, vomiting, somnolence, fatigue and sexual dysfunction.

The incidence and prevalence of adverse drug reactions to the various anti-depressants prescribed can be further reduced with the help of patient education and close monitoring.

LIMITATIONS: Several limitations are associated with this study. Firstly, the sample size was small. The observation window period for this study was only for 12 months.

This study was uni-centric and limited to the OPD only. The majority of the patients were from rural areas and therefore, were less likely to report minor side effects.

ACKNOWLEDGEMENT: We would like to acknowledge the residents and staff of the Department of Psychiatry for making this study possible with their valuable input, suggestions and constant help.