MORPHOLOGICAL AND ANATOMICAL VARIATIONS OF THE SELECTED SPECIES OF OSBECKIA L. (MELASTOMATACEAE)

MORPHOLOGICAL AND ANATOMICAL VARIATIONS OF THE SELECTED SPECIES OF OSBECKIA L. (MELASTOMATACEAE)

ABSTRACT: Osbeckia L. of Melastomataceae are unique flowering plants showing diversity in their habit and morphological features adapted to their habitats. Limited studies were recorded with the anatomy and morphology of high elevation species. The micromorphology and anatomy of vegetative and reproductive structures of seven species and three varieties of O. aspera, representing diverse habitats such as altitude, availability of water and intensity of sunlight out of the twenty species of Osbeckia reported from India were narrated in the present study. An apparent type of herkogamy noticed in Osbeckia species was also recorded. Herkogamy in this family is an important feature of phylogenetic importance. This aspect of the flowers of Osbeckia appears to represent a special type of herkogamy. The most evident type of herkogamy present in Melastomataceae was represented by flowers that have styles exerted beyond the stamens. Styles and stamens that were about the same length but bent opposite from each other were noticed in some species. Based on the comparison of herkogamy in flowers of many species, it may be concluded that this type of herkogamy was unique in Osbeckia sp. only. The present results showed wide variations among the macromorphological features among the species. Similarly, the stomatal index showed a variation from 16.46 to 36.76 (abaxial side) and 3.98 to 32.19 (adaxial side). Stomata were diacytic to anomocytic type. Epidermal hairs also showed diversity. Further studies are planned for the electron microscopic analysis of pollen, stomata and trichome nature.

INTRODUCTION: Melastomataceae comprises about 4500 species which were diverse concerning their distribution, habit, and morphology. They occupy a variety of forests, and open vegetation types including lowland savannas, meadows and grasslands, vertical land cuttings, and some species were noticed in seasonally flooded habitats. The habit of the species varies from small annual herbs to medium-sized trees, although the majority of the species were shrubs or small trees.

The Osbeckia of Melastomataceae were characterized by the urceolate or subglobose calyx-tube with bulbous-based bristles and anthers which are oblong, truncate, attenuate or beaked. Osbeckia species also show much diversity in their habit and adaptive morphological structures developed concerning their habitats.

Few studies have accounted at the anatomy and morphology of high elevation species of the family, and none of the species of Osbeckia were traced in such studies. The plants are growing at high elevations, have adaptations for withstanding harsh climatic conditions such as increased solar radiation, high winds, and high ground temperature 1. The objective of this study was to describe the micromorphology and anatomy of vegetative and reproductive structures of seven species, and three varieties of O. aspera, representing different habitats like altitude, availability of water and intensity of sunlight among the twenty species of Osbeckia reported from India.

A study on the apparent type of herkogamy present in Osbeckia was also aimed. Herkogamy is the spatial separation of stamens and stigmas usually within flowers 2. In the Melastomataceae, herkogamy is supposed to avoid selfing and promote outcrossing 3. Herkogamy in this family is an important phylogenetic feature 4. Plant responses to environmental variations involve complex interactions of many morphological, anatomical, or physiological characteristics, which are responsible for adaptive success to a particular environment or habitat.

The morphological and anatomical identification of plant fragment when present in a crude or ethnic medicinal mixture was also targeted towards the improvement of this important medicinal plant 5. Any effort on genetic improvement also begins with an assessment of morphological, anatomical and genetic variability in the local germplasm so that breeding strategies can be mapped out.

Study Area: Plants were collected from the different parts of Punmudi hills of Thiruvananthapuram district; Illikkal kallu and Wagomon of Kottayam district; Padappakra in Kollam district; Munnar and Rajamala of Idukki district and Meppadi to Chembra peak region of Wayanad district of Kerala, India. The specimens were fixed in FAA in the field itself. Micromorphology analysis was carried out using simple light microscopy on leaves, hypanthia, ovaries, petals, stamens, and stigmas of all the species and varieties. Images were taken with a Nikon D5300 camera using 40 mm macro lens. For light microscopy of flowers and leaves, the samples were hand sectioned, viewed with Leica compound microscope and digitally photographed with a Sony digital camera. The herbarium was deposited to the University college herbarium, Trivandrum with serial numbers UCB 1212 UCB1220.

TABLE 1: SPECIES OF OSBECKIA SELECTED FOR THE STUDY

4a. O. aspera L. var. aspera: Plants were shrubs growing erect; hairs were seen on the branches which were usually appressed to the stem or spreading.  Leaves simple and arranged opposite, and size varies from 3.5 cm to 9 cm in length and 1.5 to 3.2 cm in breadth. Leaves were elliptic to lanceolate, acute or shortly acuminate at apex and base attenuate and five ribs were seen towards the base. On both sides of the leaves, short hairs were seen Fig. 4a. When dry, the leaves turned yellowish-green. Petiole was 1 cm long. Stomata were anomocytic Fig. 3a, b. Flowers were about 2 cm in diameter and pentamerous in terminal cymes or sometimes in elongated clusters. Calyx tube 6-8 mm long, ca 5 mm wide, cupular, with dense short bristle-like hairs; lobes 5, oblong, obtuse.  Petals 5, pink, 1-1.5 × 0.8-1 cm, ovate, apex rounded. Stamens 10; anthers 5-6 mm long.  Ovary hairy at apex; style exserted, 1.25-1.5 cm long; stigma curved, papillate. Capsules 0.8-1 × 0.6-0.7 cm, ovoid, ribbed; seeds many Fig. 1c. 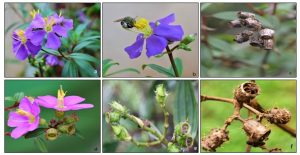 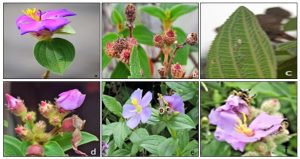 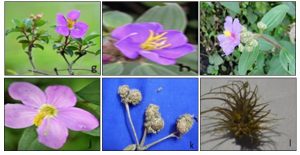 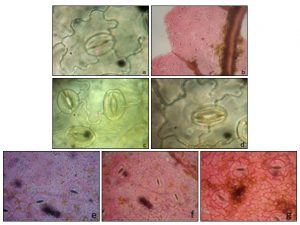 The maximum number of stomata was found in O. reticulata with a stomatal index of 47.83 and minimum was recorded in Osbeckia virgata, i.e. 16.46 Table 2. Stomata were minute and varied from diacytic toanomocytic Fig. 3a-f. Transverse sections of the leaves of Osbeckia aspera varieties show a thick cuticle, above the one cell thickened epidermis. The epidermis also covers the leaf margins and finishes of the abaxial leaf surface. The epidermis on the abaxial surface is much thinner than that of the adaxial surface. Whereas in O. virgata, both the epidermis were thickened equally. Glands were common on both the epidermis of all the species Fig. 4, a-b In O. reticulata basal globular glands were seen on the abaxial surface and in Osbeckia aspera var. aspera glands were seen serially on the lower portion of the glandular trichome. The hypodermis layer was absent. The palisade layer consists of a thin compact, elongated cells deposited with druse crystals in a scattered pattern Fig. 5a-c which make the adaxial surface rough. Transverse sections of the leaves of O. wynaadensis confirmed with the deeply sunken primary and secondary veins. Also, a thin cuticle, as well as one cell layer thickened epidermis. The glandular trichomes of the O. virgata were small with a globular gland at the base Fig. 4b. 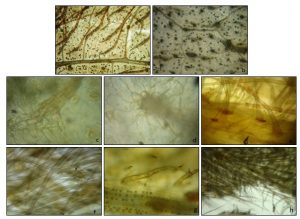 The hypanthium was glabrous in O. aspera except with the scattered inconspicuous glands on the surface, and the calyx lobes, which were ciliate. Between each pair of calyx lobes, there is was large seta. The apex of the ovary was pubescent with simple trichomes, and the style was surrounded by larger, erect, simple trichomes Fig. 1, c, f.

The petals were violet to purple, ovate and with an acuminate apex, and their surface consists of elevated cells, which were laterally contracted Fig. 2a. The stamens were totally yellow, isomorphic and lack appendages on the filament connective junction Fig. 2f- k.

Amphistomatic leaves were not common among Melastomataceous species and were absent in the closely related Melastoma. Presence of stomata on both surfaces of leaves in Osbeckia was documented for the first time. Stomatic index was high on both the surfaces in the high altitude species such as O. aspera var. wightiana and O. reticulata. The adaptive significance of amphistomatic leaves has been suggested as to maximum leaf conductance to CO2, and their occurrence has been linked to plants adapted in full-sun environments, and experiencing rapidly fluctuating or continuously available soil water as opposed to seasonal or long-term soil water reduction 10. Amphistome was a derived feature within angiosperms, and the same was likely to be the case in Melastomataceae. An additional unusual aspect of the leaves of O. reticulata was the sessile glands on the adaxial leaf surface.

Alchemilla procumbens, Geranium seemannii, Acaena elongata, Lupinus montanus, and Symphoricarpos microphyllus, distributed along an altitudinal gradient in the Sierra Nevada of central Mexico, were evaluated concerning their morpho-anatomical modifications vs. elevation and other physic-chemical features. Interestingly, the elevation was related to anatomical changes in the leaf and wood of the species. Canopy density and potassium content in the soil also contributed to explaining the variation in anatomical features 11.

Serebryanaya and Shipunov, (2009) suggested that changes in plant morphological features have resulted in small-scale evolutionary events in different species of plants 17. Xu, Guo, Xu, and Wang, (2008), analyzed leaf size variation forms a basis for evolutionary changes in plants and also leads to modifications of the distribution of leaf biomass between support and functional tissues 18. Plants are generally adapted to high phenotypic plasticity, and therefore the observed differences regarding leaf characters being caused by the direct influence of environmental conditions. But, Widén and Schiemann, (2003) noticed that phenotypic plasticity from differences in morphological sizes can coincide with genetic variation 19. Gill and Nyawuame, (2008) established phylogenetic relationships between the bicarpillatae following the analysis of the stomatal complexes and its ontogeny 20. Similarly, study reports revealed that ecotypes could be differentiated based on epidermal characters due to the adaptation of the environment in which they grow. Mbagwu, Nwachukwu, and Ubochi, (2007) confirmed closer affinity among Citrus species based on leaf epidermal cell wall variations 21. Sharma, Sehrawat, Singhrot, and Tele, (2010) compared morphological chemical characterization of Psidium species 22.

Rossatto, Takahashi, Silva, and Franco, (2010) observed that, in leaves growing in the bright sun, the regulation of stomatal opening was the main limiting factor of CO2 assimilation, emphasizing the role of stomatal conductance 23. Dahlgren, Eriksson, Bolmgren, Strindell, and Ehrlén, (2006) documented that the leaf area is a highly plastic characteristic that depends on environmental conditions, mainly light intensity 24. In Aechmea distichantha plants exposed to different environmental conditions seems to be a trade-off among photosynthetic leaf area for light capture and water use and mechanical support 25. Rodrigues Pereira et al., (2013) compared leaf morpho-anatomical variations in Billbergia elegant and Neoregelia mucugensis exposed to low and high solar radiation 26. Thus, the overall study supports the variations noticed among the Osbeckia species, i.e., the habitats of the plants play a role in their phenotypic evolution supported by their morpho-anatomical features.

CONCLUSION: The micromorphology and anatomy of vegetative and reproductive structures of seven species and three varieties of O. aspera was carried out in the present study, and it reveals that the species were evolved to cope up with the habitat variations like altitude, availability of water and intensity of sunlight. The diversity of the genus Osbeckia was due to this adaptive morphological evolution concerning their habitats.

The anatomy and morphology of high elevation species were delimited them to a unique group as compared other species. The study on the herkogamy noticed in Osbeckia is also important in their phylogenetic context. Further studies on the phenology and reproductive behavior of all the species are warranted

CONFLICT OF INTEREST: No conflict of interest among the authors.

B. Lawarence and K. Murugan *