ABSTRACT: The aim of this experiment was to find out the in-vitro effects of the extracts of certain plants, considered to have medicinal value, on the erythrocyte model. The plants, selected for the study, were Tulsi (Ocimum tenuiflorum), Neem (Azadirachta indica) and Amla (Phyllanthus emblica).Three different concentrations of leaf extracts were prepared using tris-HCl, namely 0.3 mg/ml, 0.15 mg/ml and 0.075 mg/ml and their effects on the RBCs in blood samples were studied using optical microscope. Various morphological changes like haemagglutination, shrinking, swelling, distortions, granulation of the membrane and bursting of the cells were observed. The degree of occurrence of a certain morphological change on a particular blood type varied with a variation in its concentration. Also, the same concentration of the extract showed different morphological changes with different blood groups indicating that the blood type is also important in the effects shown by the cell membranes. The crude leaf extracts of medicinal plants significantly affected the integrity and thus, the morphology of the RBCs.

INTRODUCTION: Plants are one of the most important sources of medicines in India. Today a large number of drugs in use are derived from plants like Tulsi (Ocimum tenuiflorum; Family- Lamiaceae), Neem (Azadirachta indica; Family- Meliaceae) and Amla (Phyllanthus emblica; Family- Phyllanthaceae). Scientists are targeting medicinal plants for research and development of alternative drugs, especially Azadirachta indica. It is one of the most promising medicinal plants whose extracts can act as anti-oxidant, anti-inflammatory, anti-bacterial, anti-fungal and anti-ulcer agents 1, 2. Several medicinal properties have also been attributed to Ocimum sanctum Linn.

The experiment was performed using the human RBCs due to their high density in blood (allowing observation of a large number of the cells in a single sampling) and lack of organellar structures which would ensure that the changes occurring within the structure are those of the membrane alone. The human erythrocytes have a diameter of about 7-8 µm, they are biconcave in shape and lack cellular organelles like nucleus, mitochondria etc. and hence cannot replicate and divide on their own. The erythrocyte model has been widely used as it presents a direct indication of toxicity of injectable formulations as well as general indication of membrane toxicity. Another advantage of erythrocyte model is that blood is readily available and the cells are easy to isolate from the blood and its membrane resembles other cell membranes 6. Thus, the suitability of the RBCs as a model and the inquisitiveness to Study the effects of medical plant extracts on them, led us to design the current experiment to study the various effects these extracts can have on the plasma membrane which can influence the homeostasis of the RBCs.

METHODOLOGY: The leaves of Tulsi (Ocimum tenuiflorum), Neem (Azadirachta indica) and Amla (Phyllanthus emblica), commonly found plants known to have medicinal values, were collected from the Maitreyi College premises and washed thoroughly with distilled water. The leaves were dried and the extract was prepared with tris-HCl (pH 6.8) with three different concentrations - 0.3 mg/ml, 0.15 mg/ml and 0.075 mg/ml. The different blood samples i.e. blood groups A+, B+, AB+, O+, A- and B-, were incubated with equal volume of various extracts, individually, for 5 minutes and the observations were made. For examining the changes in the morphology, the slides were observed using Nikon Eclipse E100 microscope at 400X. The same procedure was repeated with remaining medicinal plant extracts. The study was carried out from August, 2016 to April, 2017.

RESULTS: Various characteristic morphological changes were shown by the RBCs when treated with different medicinal plant leaf extracts having varied concentrations as shown in detail in Table 1, 2 and 3. Treatment with Ocimum tenuiflorum extract showed maximum effect on blood group O+ followed by B+. The morphological changes included shrinking, granular surface and darkening of cell membrane. While these characteristics were shown by majority of the blood groups in all the strengths of extract, with varying degrees, some unique morphological changes were also observed like rupturing of cells (B+), aggregation (O+), distortion (A+, B+ and AB+: only in 0.3 mg/ml extract) and polygonal cells (AB+: 0.15 mg/ml).

For Azadirachta indica leaf extract (Table 2), blood group B+ was the most affected as it showed haemagglutination, distortion, shrinkage and granular surface while O+ was the least affected. Further, while haemagglutination was seen in all the blood groups studied, swelling was observed only in blood groups A- and B-. As we decreased the concentration of the extract, the morphological changes were also lesser as compared to 0.3 mg/ml extract.

Other than these changes, some other changes in morphology included change of color of aggregates from yellow to brown (AB+ and O+: 0.3 mg/ml and 0.15 mg/ml) and polygonal shape of RBCs (AB+: 0.075 mg/ml). Further, with Phyllanthus emblica leaf extract, the blood group O+ was the most affected while A- and B‑ were least affected (Table 3). Haemagglutination (Fig. 1) was a common feature in all the blood groups studied while granular surface of RBCs (Fig. 2) was seen only in blood group B+. 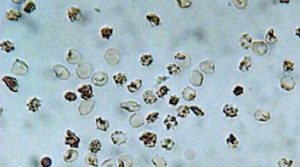 The results show significant changes in the morphology of the RBCs when exposed to various strengths of medicinal plants studied. The homeostasis and integrity of the cell membrane depends on the immediate environmental conditions in which the cell is placed including the tonicity of the medium and other substances which may interfere with the cell membrane. It was interesting

to know that the extracts of plants, considered to have medicinal value, significantly influenced the integrity of the cell membrane, thereby affecting the RBCs on the whole in-vitro. The RBCs in different blood groups also showed differences in the morphological changes. This observation may be attributed to the molecules on the cell surface of RBCs which may be directly or indirectly involved in the alteration in the functioning of the ion channels or other mechanisms involved in maintaining the osmotic balance. Similar results were observed when RBCs were exposed to extract of Ricinus communis L., where the extract proved to be toxic to cells and modified the cell membrane structure 7 and exposure to extract of Combretum zeyheri caused hemolysis in sheep erythrocytes 8.

Another study showed that treatment of blood cells with extract of Paullinia cupana results in the altered morphology of RBCs 9. The aqueous extract of Matricaria recutita also alters the RBC morphology 10. Similarly the interaction between the drugs and plasma membrane has been studied by different techniques previously 11, 12. Thus, the morphological analysis of the RBC membrane is an important method available to study how the natural products affect the RBC membrane 9, 13, 14, 15 and it is the standard protocol to see the effect of natural or synthetic drugs on the cell membrane 16.

The above explained changes in the morphology of the RBCs like breaking of cell membrane, fragmentation, hemolysis and hemagglutination, may be attributed to the various chemical components present in the medicinal plant extracts studied as the RBCs when placed in the tris-HCl and even the physiological saline don’t show any changes in the nature of the plasma membrane 17. Thus, these changes may be due to the interaction of the plant extract components with the ion transport channels or osmotic transport system present in the plasma membrane of RBCs.

Further, the study by Dkhil et al.,18 has shown that the leaf extract of Azadirachta indica contains high amount of flavonoids like rutin, quercetin, flavono glycosides, polyphenols and tannins which have antioxidant and anti-inflammatory properties. However, the protective activity of Azadirachta indica extract is dose dependent with the most effective dose being 1000 and 2000 mg/kg for renal damage in mice, produced by Plasmodium berghei 2. A similar study has reported that human erythrocytes erythrocytes undergo hydrolysis in presence of extracts from Daphne gnidium, Tamarixa phylla and Morettia canescens 19. It has been reported that the methanol extract from the leaves of Daphne gnidium has antileukemic, antibacterial, antimycotic activities 20 and Tamarixa phylla also has antimicrobial as well as phytochemical activities and are traditionally used to evacuate coagulated blood and treat hematomas 19, 21.

The RBC membrane fluidity, permeability and its functions depend on the levels of cholesterol and phospholipid. In medical conditions where the ratio between cholesterol and phospholipid is altered leading to malfunctioning of the RBC membrane, the application of P. atlantica extract helps in normalizing the RBC membrane structure 22.The papaya leaf extracts have the capability of reducing the hemolysis in-vitro and hence, are a potent alternative for treating the diseases which result in altering the membrane structure 23.Thus, the medicinal plant extracts have been traditionally used in medicine all over the world but for the use of these extracts, dose should be precisely formulated, else they can prove toxic to the cells as has been seen in several studies 24, 25, 26, 27.

ACKNOWLEDGEMENT: The authors are thankful to our Principal and also to the funding agency Department of Biotechnology, for providing necessary support under its Star College Scheme.