INTRODUCTION: A frenulum (or frenum, plural frenula or frena) is a small fold of tissue that secures or restricts the motion of a mobile organ in the body 1, 2, 3. The Maxillary labial frenum also known as frenulum labii superioris is a fold of the mucous membrane connecting the lip to alveolar process. It consists mainly of connective tissue and epithelium with some nerve fibres 4. Two types of classification have been introduced for the different types of frenum.

Placek et al proposed a morphological function classification. Accordingly four types of frenum attachment are defined as mucosal, gingival, papillary and papillary penetrating 5. Sewerin classified the frenum as variation in the morphology into eight different types such as Simple, persistent tectolabial, simple with appendix, simple with nodule, double frenum, frenum with nichum, bifid frenum and frenum with one or more variation of the above 6.

The sample selected for this study was taken from 3 states in South India namely Tamilnadu, Kerala and Karnataka. Two dentists in each of these states who have been practicing for at least five years were then selected. Thus six dentists were selected in all. From each dentist, of the reported cases with abnormal maxillary labial frenum during the last six months, 10 cases were selected for the study. Thus overall 60 cases having abnormal maxillary labial frenum were selected for the present study (n=60). The cases included both male and female from the age group 15 to 25 years. Only cases where all the teeth were present except for the 3rd molars were considered for the study. Cases with congenital abnormalities and cases with traumatic history to the upper lip were excluded from this study.

Ethical clearance was given by the institutional ethical committee of Saveetha University, Chennai. The purpose of the study was clearly explained to the samples with the assurance that the data gathered from them will be used only for research purpose and where their personal identity will not be disclosed. The data were obtained in the form of profile and intra-oral photographs with the full cooperation of the respondents.

Sewer in classification which describes the different types of normal variations in morphology of frenum was used for the categorisation of cases in this study. The samples were then categorized and the most common abnormal frenum in relation to midline diastema was then correlated.

Data were analyzed with the use of SPSS software (version 11.0.05). Chi-square test was performed to compare the correlation between the type of abnormal maxillary labial frenum and the incidence of midline diastema. Difference with a probability value of 0.05 (P<0.05) was considered to be statistically signiﬁcant.

The number and percentage of abnormal cases and their association with midline diastema are represented in the table below. (Table 2) The correlation between the type of abnormal maxillary labial frenum and the incidence of midline diastema was not statistically significant. (p 0.439 >0.05). (Table 3) 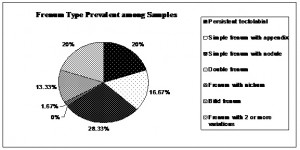 TABLE 2: THE PERCENTAGE OF DIFFERENT TYPES OF FRENUM ASSOCIATED WITH MIDLINE DIASTEMA

Sewerin classification system introduced in 19716 is the most frequently used classification system. Though many studies have been done on maxillary frenum these show different terminologies for the same frena. Sewerin classification was used for this study because it is practical, useful and easy to use. Nagaveni Et al in 2014 has conducted a similar study on the morphology of maxillary labial frenum which included primary, mixed, permanent dentition of Indian population whereas in our study we have included only permanent dentition. Midline diastema though commonly formed during young ages of development, disappears with age and corrects itself with the eruption and approximation of six anterior teeth.

Surgical resection or frenectomy of the frenum should therefore be considered only if the diastema persists post eruption and approximation 8.Current literature also suggests that orthodontists now consider frenectomy only after the orthodontic treatment is complete 9.

The diagnostic test to diagnose the abnormality is to pull the upper lip forward and to see whether blanching of the tissue occurs interproximal from labial to lingual.

Taking all this into consideration the cases used in this study consists of the age group 15-25,the age where all the six anterior teeth would have erupted and approximated. In the present study the most prevalent type of abnormal frenum was simple frenum with nodule followed by tectolabial frenum. This is in contrast to the study done by Nagaveni et al where Frenum with appendix is the most common abnormal labial frenum in permanent dentition. Our results are consistent with the study done by Janice et al (2012) 10.

The second part of this study was to find out which abnormal frenum was commonly associated with midline diastema. Statistical analysis has shown that there is insignificant difference in the results obtained in our study. However Shashua and Artun(1999) found out that there is correlation between the width of the diastema and the presence of an abnormal maxillary labial frenum 11. Many other studies have also stated that the cause for this midline diastema is that in some cases, the frenum fibres get attached to periosteum and the connective tissue of the residual intermaxillary suture which may be present at times whereas in some other cases the abnormal maxillary labial frenum just interrupts the continuity of the interdental gingival fibers 12, 13, 14. Midline diastema is often considered unaesthetic and it is one of the main reasons why patients seek orthodontic treatment. Further investigations are needed to be done on a larger sample size to find the relationship between the midline diastema and abnormal maxillary labial frenum.

CONCLUSION: The following conclusions were drawn from the present study based on the results concerning the South Indian population from the age group 15 to 25.