ABSTRACT: As an alternative to injection pharmaceutical researcher and scientist are trying to explore transdermal and transmucosal route over the last few years. To overcome the deficiency associated with the other route of administration buccal region of oral cavity is an alternative target for the administration of choice of drug. The disadvantages relative with the oral drug delivery is the extensive presystemic metabolism, instability in acidic medium as a result inadequate absorption of the drugs. However parental route may overcome the drawback related with the oral route but these formulations have high cost, supervision is required and least patient compliance. By the buccal route the drug are directly pass through into systemic circulation, less hepatic metabolism and high bioavailability. The aim of the review article is an overview of buccal drug delivery, anatomy of oral mucosa, mechanism of drug penetration and their in-vitro and in-vivo mucoadhesion testing method.

INTRODUCTION: Amongst the various routes of drug delivery, oral route is mostly preferred by the patient. Based on our current understandings of biochemical and physiological aspects of absorption and metabolism many drugs, cannot be delivered effectively through the conventional oral route, because after administration are subjected to pre-systemic clearance extensively in liver, which often leads to a lack of significant correlation between membrane permeability, absorption and bioavailability 1, 2, 3.

The oral route of drug administration is divided into several types. But this route also have some disadvantages such as hepatic first pass metabolism and enzymatic degradation within the GI tract, that prohibit oral administration of certain classes of drugs especially peptides and proteins, and buccal drug delivery is one of the a good alternative amongst the various routes of drug delivery. Within the oral mucosal cavity, the buccal region offers an attractive route of administration for systemic drug delivery.

Considering the other routes of drug delivery which has low patient compliance such as rectal, vaginal, sublingual and nasal drug delivery for controlled release, the buccal mucosa has rich blood supply and it is relatively permeable 4. The researcher group has been investigated that nasal cavity as a site for systemic drug delivery but the potential irritation and the irreversible damage to the ciliary action of the nasal cavity from chronic application of nasal dosage form put this route in the second line of drug delivery. Even though the rectal, vaginal, and ocular mucosae all offer certain advantages, but the poor patient acceptability associated with these sites renders them reserved for local applications rather than systemic drug administration 1, 2, 5. The buccal have ability to maintain a delivery system at a particular location for an extended period of time has great appeal for both local as well as systemic drug bioavailability. The buccal mucosa are rich in blood supply and absorption occur at this place is efficient, and additionally the route also providing rapid drug transport to the systemic circulation and avoiding degradation by gastro-intestinal enzymes and first pass hepatic metabolism 4.

Moreover, the oral cavity is easily accessible for self medication and the administration drug is to be promptly terminated in case of toxicity by removing the dosage form from buccal cavity. Buccal mucosa is less permeable than the sublingual site which makes it more appropriate choice of site if prolonged drug delivery 6.

Mucoadhesive Drug Delivery System in Oral Cavity 4, 7: Drug delivery via the membranes of the oral cavity can be subdivided as follows:

1)      Sublingual Delivery: drugs are delivered through mucosal membrane lining the floor of mouth into systemic circulation.

2)      Buccal Delivery: drugs are delivered through mucosal membrane into systemic circulation by placing drug in between cheeks and gums.

3)      Local Delivery: drugs are delivered into the oral cavity.

The basic components of buccal bioadhesive drug delivery system are 4, 15:

The Oral Cavity: The oral cavity isdivided into two regions the lips and cheeks bound the outer oral vestibule and oral cavity formed by hard and soft palates, the floor or mouth and tonsils. The oral cavity is lined by a multilayered mucous membrane of a highly-vascularized nature relatively thick and dense. Under the mucous membrane there are net of capillaries and arties from which drug is penetrating into the systemic circulation. Inside the cheeks there is a lining of membrane that is buccal mucosa, and term “buccal drug delivery” refers to drug release which can occur when a dosage form is placed in the outer vestibule between the buccal mucosa and gingival.

A)     Epithelium:The epithelium serves as a protecting covering for the tissue and a barrier to the entry of foreign particle. It has thickness 500-800µm and consists of 40-50 layers of stratified sqamous epithelial cell.

The Mucus Layer: To the mucosal epithelial surface a translucent and viscid secretion which is a thin, continuous gel blanket are adherent called as mucus. In the human the mean thickness of this layer varies from about 50 to 450µm. The goblet cells lining the epithelia or by special exocrine glands that secreted mucus. The exact composition of the mucus layer varies substantially depending on the species, the anatomical location and the pathphysiological state. However, it has the following general composition

Functions of mucus layer: Act as a protective, barrier, adhesion and lubrication.

The diffusion theory is the mutually interacting of mucoadhesive molecules and glycoprotein of mucus and building of secondary bonds by interpenetration of their chains (Fig. 1). 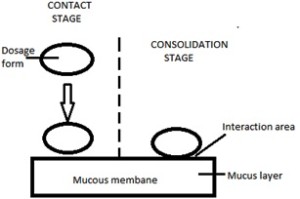 According to the dehydration theory the material get gelify when it come in contact with the mucus in the aqueous environment. The drawing of water into the formulation due to concentration gradient until the osmotic balance is reached. This process increases the contact time of mucous membrane with the mixture of formulation and mucus. So it is not the interpenetration of macromolecules chains, it is the water motion that lead to the consolidation of the adhesive bond. The dehydration theory is not applicable for highly hydrated forms or solid formulations (Fig. 2).

If greater the interfacial energy in relating to the individual surface energy, greater the adhesion work WA, i.e., greater the energy needed to separate the two phases.

Classification of mucoadhesive polymers used in oral cavity is presented in Table:

1)      Polymer and its degradation products should be non-toxic, non-irritant and non-absorbable in the gastrointestine tract.

2)      The polymer should have good properties like wetting, swelling, solubility and biodegradability properties.

3)      The polymer should show sufficient mechanical strength by adhere quickly to the buccal mucosa.

4)      The polymer should show sufficient tensile and shear strengths at the bioadhesive range.

5)      Polymer should not be of high cost and must be easily available.

6)      The polymer must have bioadhesive properties in both dry and liquid state.

7)      The polymer should have properties like penetration enhancement and local enzymatic inhibition.

8)      The polymer does not decompose during the shelf-life of dosage form and during storage.

9)      Should have narrow distribution and optimum molecular weight.

10)  The polymer should not have degree of suppression of bond forming group but should have sufficient cross-linkage.

11)  Should not produce the secondary infection in the dental caries.

(a)   Wilhelmy plate technique 42: This method is used to measure the mucoadhesive strength. In this method the glass plate is dipped into the mucoadhesive polymer solution. The animal skin such as goat intestine is used to take the mucus gel and placed the container at 37ºC. On the one side the glass plate is attached with nylon thread, and on the other side the weight is raised. At specific interval water required to pull out the glass plate from the mucus represent. And the force required the force required to break the mucus-polymer contact against adhesion. Six plates are used for the test and average is calculated (Fig. 3). 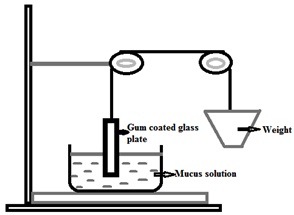 (b)   Novel Electromagnetic Force Transducer (EMFT) 43:From a tissue sample EMFT measure the tissue force required to detach the magnetic loaded polymer micro-carrier. The electromagnet that is mounted on microscope vertically was used to generate the magnetic force when micro-carrier was attached to the sample tissue. When tissue chamber was slowly moved down, away from the magnet trip the computer determine the position of micro-carrier. This process was continuous video until it is completly pulled free to the tissue and from this calculates the position of micro-carrier. The results are shown by plot of force vs displacement and eighter by raw data. By this technique evaluation of mucoadhesion of polymer to specific cell type can be done and also for the mucoadhesive drug delivery in tissue specific targeted. 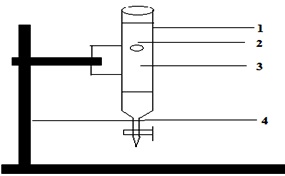 CONCLUSION: The buccal drug delivery provides a several advantages for the delivery of drug. The buccal mucosa is rich in both vascular and lymphatic system through which drugs are directly drainage in systemic circulation and first-pass metabolism in liver and pre-systemic elimination in gastrointestinal tract are avoided. Additionally buccal drug can be terminated in case of toxicity thereby provide a safe and easy method for administration of drugs. Buccal drug delivery is a promising area for continued research with the aim of systemic delivery and attractive alternative for delivery of potent peptide and protein drug molecules. For the evaluation of the buccal drugs both techniques of in-vitro or in-vivo are developed.  Mucoadhesive dosage forms are the extended forms of the simple oral drug delivery system with large number of advantages over it.However with the recent developments of new formulation types such as mucoadhesive preparations and the use of peptides as drugs this number may increase in the future.