MUCOADHESIVE MICROPARTICLES OF CARBOXYMETHYL CHITOSAN FOR SITE SPECIFIC DELIVERY OF PANTOPRAZOLE: FORMULATION AND IN VITRO CHARACTERIZATION

MUCOADHESIVE MICROPARTICLES OF CARBOXYMETHYL CHITOSAN FOR SITE SPECIFIC DELIVERY OF PANTOPRAZOLE: FORMULATION AND IN VITRO CHARACTERIZATION

Carboxymethyl chitosan, a water soluble modified carboxymethyl substituted chitosan derivative have distinct and unique properties, rendering them effective to form selective permeable mucoadhesive film or membranes. In the formulation of chitosan microsphere an acidic environment is essentially required that may degrade acid sensitive moiety, peptide or protein drugs. Mucoadhesive microparticle of carboxymethyl chitosan was designed and developed for site specific sustained release of Pantoprazole sodium. Thus prolong the residence time at the absorption site by intimate contact with the mucus layer thereby increase bioavailability, reduce the frequency of dose administration and also prolong the drug release. The mucoadhesive microparticles were prepared by Orifice ionic gelation method using carboxymethyl chitosan in combination with Carbopol 934 and HPMC K15. Entrapment efficiency was in the range of 42.4 to 84.6 %. SEM studies revealed that microparticles were discrete, spherical and free flowing. Microparticle exhibited good mucoadhesive property in the in vitro wash off test and found that Carbopol 934 had greater mucoadhesive strength than that of HPMC K15. A sustained release of Pantoprazole sodium was obtained from mucoadhesive microparticle. Stability study of optimized batch was carried out and drug content found was retained with permissible limits and there was no significant difference in the drug content.

INTRODUCTION: The oral route of drug administration constitutes the most convenient and preferred means of drug delivery to systemic circulation of body. However, oral administration of most of the drugs in conventional dosage forms has short-term limitations due to their inability to restrain and localize the system at gastro-intestinal tract.

Microparticles constitute an important part of these particulate drug delivery systems by virtue of their small size and efficient carrier capacity.

Microparticles are the carrier linked drug delivery system in which particle size ranges from 1-1000 μm in diameter having a core of drug and entirely outer layers of polymers as coating material 1.

However, the success of these microspheres is limited due to their short residence time at site of absorption. It would, therefore be advantageous to have means for providing an intimate contact of the drug delivery system with the absorbing membrane.

Chitosan has both reactive amino and hydroxyl groups, can be used for modification of its physicochemical properties by cross linking carboxymethylation, galactosylation etc. for drug delivery and biomedical application 3. Chemical modification of chitin and chitosan may have an advantage, because the modification with a hydrophilic reagent would be expected to result in hydrophilic chitin or chitosan while keeping the fundamental skeleton intact 4. A modified carboxymethyl substituted chitosan can be prepared is water soluble and have distinct and unique properties, rendering them effective to form selective permeable film or membranes 5.

Additionally in the formulation of chitosan microsphere an acidic environment is essentially required to dissolve chitosan that may degrade acid sensitive moiety and peptide or protein drugs. Pantoprazole sodium, a drug of choice recommended in the treatment of peptic ulcer. Pharmacokinetic studies of pantoprazole revealed that it is well absorbed (at least 30%) and can be detected in the plasma within 1 h. It is also very susceptible to acidic environment 6.

The objective of present work was to design mucoadhesive multiparticulate system of water soluble chitosan derivative for delivery of pantoprazole at absorption specific site. The system is anticipated to protect drug loss by providing acid free environment during formulation and guard in upper GI tract results from inherent property of Eudragit L-100. Mucoadhesive properties of microparticles prepared by ionic gelation were evaluated to confirmed prolonged residence time of drug in GIT.

Preparation of Microparticle: Microparticles were prepared by orifice ionic gelation method. Carboxymethyl chitosan and mucoadhesive polymer such as HPMC K15 and Carbopol 934 were dissolved in purified water to form a homogeneous polymer solution. The core material (drug) was added to this polymer solution and mixed to form a smooth viscous dispersion. This dispersion was added drop wise into 5% w/v CaCl2 solution through a syringe 22 gauge. The added droplets were retained in the calcium chloride solution for 15 minutes to complete the curing reaction and to produce spherical rigid microparticles. The microparticles were collected and dried in an oven at 45°C for 4 hours.

Where,   V0 = volume of microparticle before tapping

V = volume of microparticle after tapping

Where Esw = Percent swelling of carboxymethyl chitosan microparticles at equilibrium. 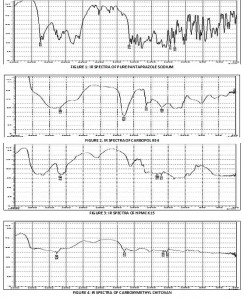 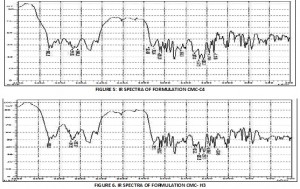 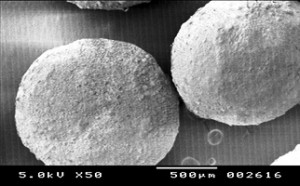 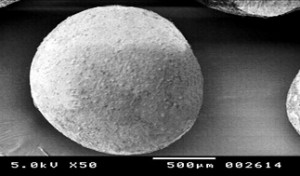 It was observed that the drug entrapment efficiency of the prepared microparticles increases progressively with an increase in the proportion of respective polymers. Carboxymethyl chitosan concentration along with mucoadhesive polymer increases may also reduce loss of drug in curing medium due to formation of dense matrix structure. Increase in polymer proportion increases the viscosity of the dispersed phase. The higher viscosity of the polymer solution at the highest polymer proportion would be expected to decrease the diffusion of the drug into the external phase which would result in higher entrapment efficiency. The higher incorporation efficiency was observed as the proportion of carboxymethyl chitosan increased. This may be attributed to the greater availability of active calcium binding sites in the polymeric chains and consequently the greater degree of cross linking as the quantity of carboxymethyl chitosan increased, resulting in the formation of nonporous microspheres.