ABSTRACT: Proteins are the most essential and versatile macromolecules of life, and the knowledge of their functions is a crucial link in the development of new drugs, better crops, and even the development of synthetic biochemicals such as biofuels. Experimental procedures for protein function prediction are inherently low throughput and are thus unable to annotate a non-trivial fraction of proteins that are becoming available due to rapid advances in genome sequencing technology. This has motivated the development of computational techniques that utilize a variety of high-throughput experimental data for protein function prediction, such as protein and genome sequences, gene expression data, protein interaction networks and phylogenetic profiles.

INTRODUCTION: The development of information technology has great impact in many domains. The medical industry is focused on developing innovative tools to support medical practitioners. There are many medical solutions has been emerged in this decade. However, there are research gaps where there is no noticeable solutions has been found. The disease prediction is the area what focused by the researchers. The disease prediction is the process of identifying the possibility of the disease from given input details. The disease prediction reads the given input pattern and history of disease pattern. Based on both of them, the method computes the probability of the disease to select a single one.

For any disease found on the human, the genes plays the vital role. There are number of genes present in the human anatomy.

Among them, there are few genes can be named which are supporting the growth of disease. Identifying such influencing genes is a challenging process, because there is only negligible gap between the relationship of the genes. There are number of gene selection approach has been discussed earlier. The popular frequent pattern mining technique can be used in selecting the gene sequence. Because of the size of sequence is higher, identifying the minimum sequence or restricted sequence is essential.

The gene sequence has no formal order and they can present in any form. In order to identify the sequence, it is necessary to generate the various sequences possible. By generating the number of sequences which are possible they can be used to predict the disease. The sequences can be generated in different size from one to many. One size gene has the size of single where the rest are vary from the size 2- any. So the gene sequence can be generated in different size and can be used to perform gene selection.

The growing representation of protein sequence has been used in many medical problems.

Whatever the disease caused in human body is based on certain protein sequence. There are number of research has been ongoing for the detection and prediction of protein sequence. For example, given a long sequence S, there exist number of sub sequences can be generated. Among them you can identify a sequence which is the most reason for the cause of disease. Similarly, the problem of gene prediction has been approached by various researchers.

Among the small sequence given, we can generate a number of sequences of different size. If the generated sequences are placed in a gene set Gs, among them a sequence S can be identified.

Methods Explored: There are number of methods has been identified for the problem of sequence selection and this section list a set of methods.

The efficiency of the method has been evaluated with different micro array cancer data sets and compared with the classifiers like Naïve bayes, K-nearest rule, and SVM.

Cancer subtypes prediction using Gene-Expression using Feature Selection and Transductive SVM has been discussed in 3. The method adapts both gene selection and transductive support vector machine (TSVM) to predict the gene sets. The method identifies the genes using TSVM to improve the accuracy of prediction. The performance of the method has been compared with standard SVM technique.

To identify uncovered gene pathways which characterize the cancer heterogeneity an efficient method has been proposed in 4, which uses the sparse statistical method. The method specifies set of pathway activities which are identified from the micro array data using Sparse Probabilistic Principal Component Analysis (SPPCA). The method also generates an association between gene-gene related to the cancer phenotypes.

Predicting metastasis of breast cancer has been discussed in 5 and performs a comparison of classification performed by different methods and analyzes the results. For the prediction of metastasis, the method uses voting approach. The method has produced efficient results than other methods.

In 7, identifies the pattern of genes present in the breast cancer patients. Using the pattern identified from the gene set available, the method selects the subset of genes in form of pattern. The selected pattern represents the gene selection.

Identification of a Comprehensive Spectrum of Genetic Factors for Hereditary Breast Cancer in a Chinese Population by Next - Generation Sequencing 9, discussed to classify a complete spectrum of genetic factors for genetic breast cancer in a Chinese population, we did an analysis of germline alterations in 2,165 coding exons of 152 genes related with genetic growth using next-generation sequencing (NGS) in 99 breast cancer patients from relations of cancer patients irrespective of growth types.

Genomic prediction of disease occurrence using producer-recorded health data: a comparison of methods 10, discusses of single-trait then two-trait sire models was examined using Bayes A and single-step approaches for mastitis and somatic cell notch. Variance mechanisms were projected. The comprehensive dataset was alienated into exercise and authentication sets to perform perfect comparison. Projected sire upbringing values were used to approximation the amount of daughters probable to develop mastitis. Predictive ability of each model was assessed by the sum of χ2 values that associated foretold and observed facts of daughters with mastitis and a number of wrong forecasts.

Gene Change Profiling of Breast Growths for Scientific Decision Creation: Motorists and Travelers in the Cart Beforehand the Mount 11, discusses topical advances cutting-edge molecular summarizing allow for a rapid and relatively cheap assessment of manifold changed genes or gene crops from small quantities of tumor tissues or gore. The test ahead is how to incorporate these consequences into clinical practice correctly, and in what way to provide patients with the finest possible yet evidence-based care. Herein, the author provides a brief overview of genetic mutation profiling with a focus on next-generation sequencing (NGS) and possible clinical utility.

A single step variance based gene identification method has been discussed in 12. The method collects the event data from united state firms. Using the single step gene variance measure the method selects the genes efficiently. FERAL: network-based classifier with submission to breast cancer consequence forecast 13, has been discussed to improve performance and consistency of discovered markers of the initial molecular classifiers. In malice of the first claims, recent educations exposed that neither presentation nor reliability can be enhanced using these systems. NOPs typically rely on the building of meta-genes by being around the look of several genes linked in a network that encodes protein connections or trail information. In this object, we representation several important issues in NOPs that obstruct on the forecast power, constancy of exposed indicators and confuses organic clarification.

Gene Assortment for the Rebuilding of Stem Cell Differentiation Trees: A Linear Programming Approach 14, using  genetic factor appearance data at both node, we construct a prejudiced Euclidean distance metric such that the smallest spanning tree with admiration to that metric is exactly the given difference hierarchy. We deliver a set of linear restraints that are provably adequate for the wanted building and a linear programming method to classify sparse sets of weights, efficiently identifying genetic factor that is greatest relevant for discerning different shares of the tree.

An assortment of a breast cancer subpopulation-specific antibody by means of phage display on tissue sections 16, prove an approach for phage show selection of recombinant antibody wreckages on cryostat sections of humanoid breast cancer tissue. This technique allows for assortment of recombinant antibodies compulsory to antigens exactly expressed in a small part of the flesh section. In this case, a CD271+ subpopulation of breast tumor cells was targeted, and these may be possible breast cancer stalk cells.

We remote an antibody fragment LH 7, which in resistant histo chemistry trials proves specific binding to breast cancer subpopulations. The selection of antibody rubbles directly in unimportant defined areas within a larger section of malevolent tissue is a novel method by which it is possible to healthier target cellular heterogeneity in proteomic studies.

Intelligent Breast Cancer Diagnosis Using Hybrid GA-ANN, Computational Intelligence 17, announces an automatic breast cancer judgment technique using a genetic algorithm (GA) for concurrent feature assortment and limit optimization of artificial neural networks (ANN). The recitals of the proposed procedure employing three dissimilar differences of the back propagation method for the fine tuning of the weight of ANN are compared. The algorithm is called the GAANN_XX where the XX refers to the back-propagation training variation used.

Comparison of feature selection methods for cross-laboratory microarray analysis  19, investigate four feature selection methods t-Test, Significance Analysis of Microarrays (SAM), Rank Products (RP) and Random Forest (RF) across breast cancer and lung cancer microarray data which consists of three cross lab data sets each. Their results show that SAM has the best classification performance. RF also gets high classification accuracy, but it is not as stable as SAM.  The Test performance is the worst among the four methods.

In 20, an binary black hole and random forest ranking algorithms are proposed to improve the performance of gene selection and classification. The method is focused on removing the redundant data from the micro array data sets. The method produces efficient results on gene selection.

The Fig. 1 shows the architecture of protein sequence prediction and shows the functional components in detail.

Pre-processing: In this stage, the method reads the protein sequences from the data set and for each protein sequence the method verifies the presence of all dimensions. If there exist any incomplete sequence then that will be removed from the data set. The pre-processing algorithm performs the noise removal operation to enhance the performance of the sequence prediction algorithm. 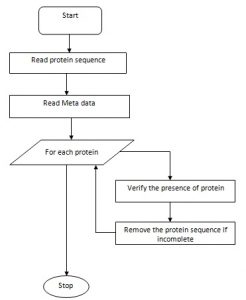 The Fig. 2 shows the flow chart of pre-processing algorithm and shows the details steps.

If Gsi contains all genes

The above discussed algorithm identifies the presence of all the genes from the meta data and removes the incomplete genes. 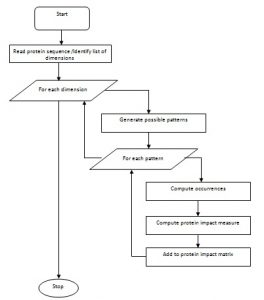 The Fig. 3 shows the flow chart of protein impact matrix generation and shows the detailed steps.

Identify the dimension of the sequence Sdim =

For each dimension size Dsize

For each pattern Pi from Ps

The above discussed algorithm computes the protein impact value for each of the protein sequence given.

For each protein sequence

Verify the presence of all dimensions.

For each dimension from D

Store into the protein impact matrix.

Choose the sequence with more weight.

The above discussed algorithm performs the prediction of protein sequence from the available sequences.