MYCOSYNTHESIS OF SILVER NANOPARTICLES AND ANTIBACTERAL EFFECTS IN WOUND DRESSING

MYCOSYNTHESIS OF SILVER NANOPARTICLES AND ANTIBACTERAL EFFECTS IN WOUND DRESSING

A. Avila Jerley*1 and A. Anita Margret 2

Bionanotechnology has emerged up as integration between biotechnology and nanotechnology for developing biosynthetic and environmental friendly technology for synthesis of nano materials. Silver has been known to have effective bactericidal properties for centuries. Nowadays, silver based topical dressings have been widely used as a treatment for infection in burns, open wounds, and chronic ulcer. As the pathogenic organisms are getting evolved day by day due to mutation and gaining antibiotic resistance, an important industrial sector of nanosciene deals with the preparation and study of nanoparticles in antibacterial clothings, burn ointments and  coating for medical device. The size of nanomaterials is much smaller than that of most biological molecules and structures, therefore nanomaterials can be useful in both in vivo and in vitro biomedical research application. The purpose of the study is to synthesis and characterizes the fungal silver nanoparticles using F.oxysporum. Further investigation of the shape and size of fungal nanoparticle was done by X-ray diffraction and Scanning electron microscopic studies. A silver nanoparticle at different concentration was assessed for its antibacterial effect, against various bacteria.Further Silver based topical dressing incorporated with fungal nanoparticle was prepared and integrated into cotton band aid gauze. This study revealed the enhancement of the synthesis of silver nanoparticles by the reduction of aqueous silver ions by simultaneous release of extracellular metabolites from the culture of F. oxysporum. It also focuses on the potential application of silver nanoparticles in the medical field as a topical dressing against various wound pathogens.

INTRODUCTION:Nanoparticles are clusters of atom in the size range of 1-100nm. The word “nano” is a Greek word which means “extremely small”. The metallic nanoparlticles are most promising as they show good antibacterial properties. In the recent years the preparation and characterization of nano structured materials have become an extreme interest because of their distinct properties and their potentials used in various physical, biological, biomedical and pharmaceutical application 1. Microorganisms play an important role in remediation of toxic metals through reduction of metal ions, this was considered interesting as nanofactories 2. Due to the increasing prevalence of silver nanoparticles in consumer products, there is a large international effort underway to verify silver nanoparticle safety and to understand the mechanism of action for antimicrobial effects.

Colloidal silver has been consumed for decades for its perceived health benefits but detailed studies on its effect on the environment have just begun. The ion release rate is a function of the nanoparticle size (smaller particles have a faster release rate), the temperature (higher temperatures accelerate dissolution), and exposure to oxygen, sulfur, and light. In all studies to date, silver nanoparticle toxicity is much less than the equivalent mass loading of silver salts. The unique properties of silver nanoparticles make them ideal for numerous technologies, including biomedical, materials, optical, and antimicrobial applications, as well as for use in nanotoxicology studies 3. They have also been used in catalysis4and biosensor 5.

The filamentous fungi possess some advantages over bacteria in nanoparticles synthesis, as most of the fungi are easy to handle, required simple nutrient, possess high wall-binding capacity, as well as intracellular metal uptake capabilities 16. The potentiality of fungi is secretion of large amount of proteins, thus increases its productivity which is a suitable option in production of metallic nanoparticles among other microorganism 6.Moreover the process can be easily scaled up, economically viable with the possibility of easily covering large surface area by the growth of mycelia. Silver has been known to have effective bactericidal properties for centuries.

Therefore, use of silver nanoparticles is also important as several pathogenic bacteria have developed resistance against various antibiotics 7. Hence, sliver nanoparticles application ranging from silver based dressing, silver coated medicinal devices, such as nanogels, nanolotions, etc. Silver is used in different kinds of formulation like coating agents, wound dressing, etc which make use of delivery system that release silver in different concentration 8.Silver nitrate is still a common antimicrobial used in the treatment of chronic wounds. Such a way they prevent infection, heals the wounds and anti-inflammatory infection 9.  The new technologies of impregnation of silver nanoparticles are now commercially available for use but their antimicrobial efficiencies are unknown 10.

Silver coated dressings are used extensively in wound management, particularly burn wound 11, chronic leg ulcers and traumatic injuries 12, 13. The nanoscale silver will play important roles in understanding the ability to manipulate biological process which will be the central theme to present biomedical & biological issues that need a nanoscience of nanotechnology approach. Silver ions are reduced extracellularly by F. oxysporum to generate stable silver nanoparticles in water 14.  This particle can be incorporated in several wound dressing cloths. These cloths with silver nanoparticles are sterile and can be useful in hospital to prevent to minimize infection with pathogenic bacteria. A new generation of dressing with antimicrobial agents like silver & biopolymer was developed to reduce or prevent infection.

Moreover, these particles could have innumerable medical applications. The present investigation is aimed to develop a method for producing biofriendly silver nanoparticles from F.oxysporum, its use as antibacterial agent andattempts are being made to formulate silver nanoparticles incorporated wound dressing.

Organism for Study: The fungi selected for this study is F.oxysporum was collected from MTCC, IMTECH Chandigargh, India.

Cultivation of Fungus: The fungal spores of F.oxysporum  were cultured in potato dextrose agar(PDA) medium at 28°C The fungal mycelia were isolated from PDA medium was inoculated in500ml Erlenmeyer flask containing 100ml of potato dextrose broth for 6 days at 28°C.

Biosynthesis of Silver Nanoparticles: The fungal biomass was filtered, washed and resuspended in sterile deionized water. The biosynthesis of silver nanoparticles were carried out as following:

Approximately 10g of F. oxysporum filtrate was taken in a conical flask containing 100ml of deionized water and was kept for 72hrs at 28°C. Then the aqueous solution components were separated by filtration. To this solution (fungal filtrates) AgNO3 (10¯³ M) was added and the system was kept for several hours at 28°C. Aliquots of the reaction solution were removed periodically and the absorption was measured in a UV-spectrophotometer at 440nm.

Characterization of Silver Nanoparticles: The synthesized silver nanoparticles were characterized by X-ray diffraction & Scanning electron microscopy for the estimation of crystalline structure, mean size and morphology.

Bactericidal Test: Overnight cultures of test pathogens like Staphylococcus sps, Streptococcus sps, Klebsiella sps & E.coli were inoculated into sterile broth and incubated for 3-5 hrs to standardize the culture to 106cfu/ml. Agar diffusion assay was carried out to check the antimicrobial activity .The plates were incubated at 37o C for 24 hrs during which activity was evidenced by the presence of a zone of inhibition surrounding the well. Antimicrobial activity was expressed as the diameter of inhibition zones (mm) around the wells.

Loading of Silver Nanoparticles in cotton fabrics (band aid gauze): Cotton fabrics were washed, sterilized, dried and was cut into small pieces with maximum dimension of 5×5cm. The fungal filtrate was treated by ultracentrifugation for 5 mins and half of the filtrate was eliminated to concentrate the silver nanoparticles. Then these cotton fabrics were impregnated with silver nanoparticles by submerging these fabrics in a 50ml of fungal filtrate in rotatory shaker at 600rpm for 24hrs and were dried in Hot air oven.

Antimicrobial activity of impregnated Silver Nanoparticles: The dried nano coated cotton gauze were placed onto the  Muller  Hinton agar plates which were swabbed with  test organisms like Staphylococcus sps, Streptococcus sps, and E. coli. The plates were incubated at 24 hrs at 37°C and the antimicrobial activity of fungal silver nanoparticles was observed by the presence of zone of inhibition around the nano incorporated cotton gauze.

Cultivation and Biosynthesis of Silver Nano particles by UV-Visible Spectra Analysis: There was a profound growth of mycelium on the potato dextrose agar. The pure line of fungi was checked by light microscopy depicted the presence of spore and mycelium of F.oxysporum. The subcultures of spores was maintained in PDA medium and the fungal biomass generated through the PDA broth as show in Fig. 1. 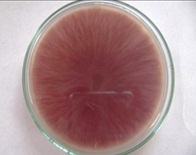 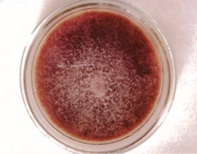 FIG. 1: (a) Profuse Mycelial growth of F. oxysporum in PDA medium (back view)

The Erlenmeyer flasks with the F.oxysporum biomass were a pale yellow color before the addition of Ag+ ion and this changed to brownish color  on completion of the reaction with Ag+ ion, the appearance of a yellowish-brown color solution containing the biomass suggested the formation of silver nanoparticles. The UV-visible spectra analysis of   F.oxysporum showed (Fig. 2) a strong surface plasmon resonance centered at 440nm which clearly indicates the increase in intensity as the time increases.

The solution was extremely stable, with no evidence of flocculation of the particles even after several weeks of incubation. This indicates the reduction of ions occurs extracellularly through reducing agents released into the solution by F. oxysporum. And it shows that fungal silver nitrate has been converted to nanosilver in the PDA medium through the enzyme nitrate reduction under the optimum condition of temperature, pH and time of reaction, agitation rate and fungal biomass. The production of silverl nanoparticles by Fusarium oxysporum is due to presence of extracellular enzyme hydrogenase. This extracellular enzyme shows excellent redox properties and it can act as an electron shuttle in metal reduction. It was evident that electron shuttles or other reducing agents (e.g., hydroquinones) released by microorganisms are capable of reducing ions to nanoparticles.

Scanning Electron Microscopic Analysis of Nanoparticles by Fungal Interaction: Electron microscopy analysis confirmed the presence of nanoparticles and provided morphological information.The micrograph of fungal biomass treated with silver nanoparticles in which silver has been found adhered to the cell wall surface as shown in Fig. 3. 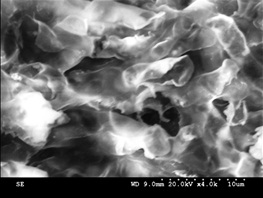 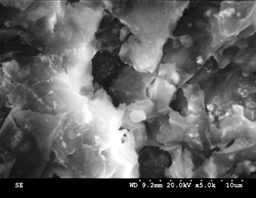 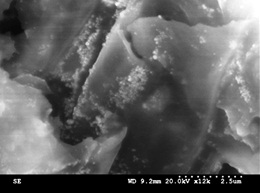 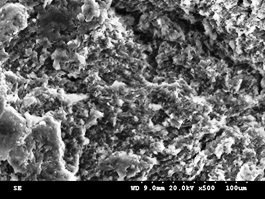 Where ‘d’is the mean diameter of the nanoparticles, ‘λ’ is wavelength of X-ray radiation source and θ is the angular FWHM of the XRD peak at the diffraction angle θ.  Finally the mean size of nanoparticles estimated by XRD is   81 nm. 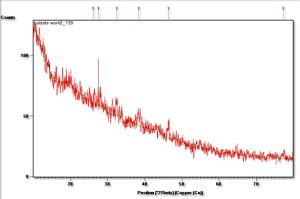 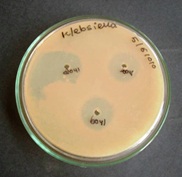 Nanoparticles incorporation in cotton fabrics and their Antibacterial effects: All silver-incorporated cotton dressings were investigated for their bactericidal activity, There was color change from white to brown color in the cotton fabrics which indicates the impregnation of silver nanoparticles Fig. 6. 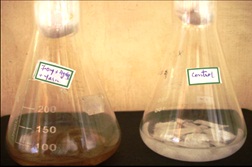 The silver incorporated dressings were analyzed for antibacterial activity against the test strains Staphylococcus species, Streptococci species, and E. coli. In the control cotton cloth, there was presence of the bacterial colonies. But, in the area cotton cloth with silver nanoparticles bacterial growth were inhibited. Among all the test strains, silver incorporated dressing showed high bactericidal activity against Staphylococcus species (Fig. 7). 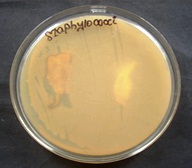 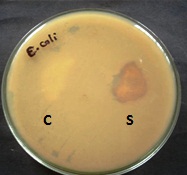 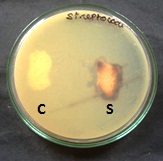 CONCLUSION: This study demonstrated the possible use of biologically synthesized silver nanoparticals in wound dressing. Even though gold/silver nanoparticles have been synthesized using prokaryotes such as bacteria and Eukaryotes such as fungi 15. This fungal strain F. oxysporum exhibited its capacity to produce silver nanoparticles depending on the reductase or electron shuttle relationships of metal ions present in solutions. On comparing with other microorganisms the mechanism of our synthesis of nanoparticles in fungi achieving better control over shape, size and kinetics together with characteristics and its applications in wound dressings.

These nanoparticles has various application including biolabelling and antimicrobial agents. Antibacterial activity of silver nanoparticle was found to be dependent on the size of silver particles, its production capacity and the release of extracellular enzyme by F. oxysporum. A wide array of silver-based dressings is available in the market and this encourages a wider application in acute and chronic wound care, such as in diabetic ulcers. Further methods of assessment, including the use of infected animal models and clinical studies, will be necessary to gain a better understanding of the antimicrobial efficacies of these dressings.

ACKNOWLEDGEMENT: We would like to thank Central Electrochemical Research Institute (CERI), Karaikudi, Tamilnadu for their technical assistance in Electron Microscopy and XRD Spectral analysis during our research.

A. Avila Jerley* and A. Anita Margret