INTRODUCTION: The scope of developing and validating analytical methods is to ensure a suitable method for a particular analyte more specific, accurate and precise. The main objective for that is to improve the conditions and parameters, which should be followed in the development and validation.

Ranolazine is available as a film-coated, non-scored, extended-release tablet for oral administration. Ranolazine is a white to off-white solid. Ranolazine is soluble in dichloromethane and methanol; sparingly soluble in tetrahydrofuran, ethanol, acetonitrile, and acetone; slightly soluble in ethyl acetate, isopropanol, toluene, and ethyl ether; and very slightly soluble in water. Literature survey revealed that various analytical methods such as HPLC 2, LC-MS 3, 4, 6, 7, 8 are used for assay of ranolazine in bulk and pharmaceutical dosage form and for bioequivalence study. No Nanodrop spectrophotometric method has been reported for estimation of Ranolazine in bulk. Hence, an attempt has been made to develop new Nanodrop Spectrophotometry method for its estimation in bulk with good accuracy, simplicity, precision and economy. The Nanodrop ND-1000 is a full-spectrum spectrophotometer (UV and visible spectrum, 220-750 nm) for measuring the absorbance the sample droplet is held in place by surface tension when it is slightly compressed between the pedestal and the sample arm; this generates the defined pathway of 1 mm.

Instrumentation: Spectral and absorbance measurements were made on Nanodrop spectrophotometer. Denver TB-215D balance was used for weighing the samples.

Scanning and determination of maximum wavelength (lmax): In order to ascertain the wavelength of maximum absorption (λmax) of the drug, different solutions of the drug (200 ppm and 400 ppm) in distilled water were scanned using Nanodrop spectrophotometer within the wavelength region of 220- 700nm against distilled water as blank. The resulting spectra are shown in fig. A, B, C and the absorption curve showed characteristic absorption maxima at 272nm for Ranolazine. All spectra of analysis are shown in fig. D. 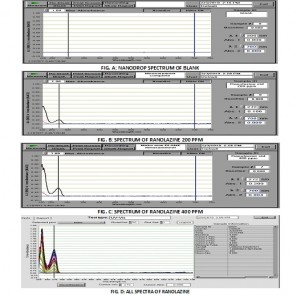 Preparation of working standard solutions and construction of standard graph: The prepared stock solution was further diluted with distilled water to get working standard solutions of 12.5, 25, 50, 100, 200, 400, 800, 1000, 1200, 1600, 1800 and 2000 ppm of Ranolazine to construct Beer’s law plot for pure drug, the absorbance was measured at λ max 272 nm, against distilled water as blank. The results are shown in table 1. The standard graph was plotted by taking concentration of drug on X-axis and absorbance on Y-axis and is shown in fig. E. The drug has obeyed Beer’s law in the concentration range of 12.5-2000 ppm. The linearity curve data is shown in table 2. All spectra for linearity are shown in fig. F. 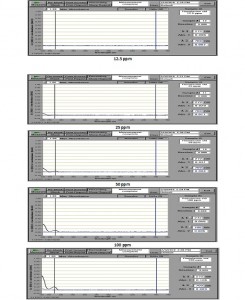 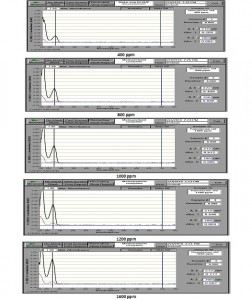 FIG. F: ALL SPECTRA FOR LINEARITY

Accuracy: To determine the accuracy of the proposed method, recovery studies were carried out by adding different amounts (80%, 100%, and 120%) of bulk samples of Ranolazine within the linearity range were taken. From that percentage recovery, values were calculated. The results are shown in table 3. All spectra for accuracy are shown in fig. G. 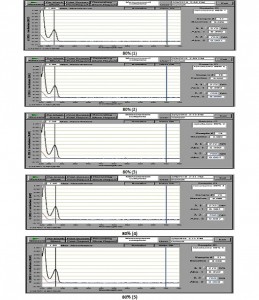 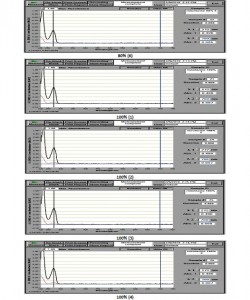 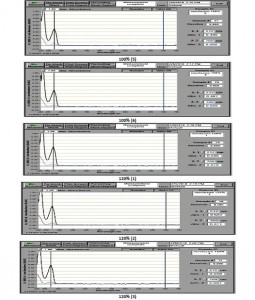 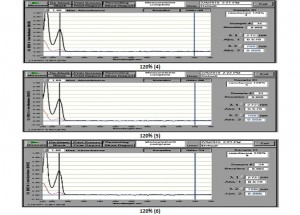 FIG (G) ALL SPECTRA FOR ACCURACY 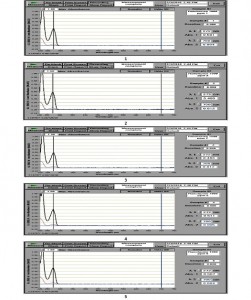 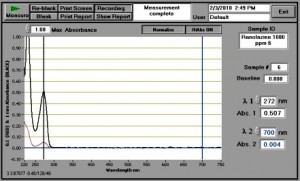 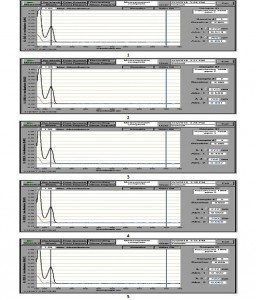 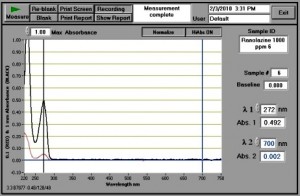 FIG. I: SPECTRA FOR METHOD PRECISION

CONCLUSION: The proposed method was simple, sensitive and reliable with good accuracy and precision. Hence, this method can be used for the routine determination of Ranolazine in bulk form.