INTRODUCTION: “There is plenty of room at the bottom” was once told by Richard Feynman, a Nobel laureate who in 1959 first proposed the concept of nano scale structures for use. This was the phrase which gave birth to the Nanotechnology. Nanotechnology scales up to one billionth of a meter. Generally, they are considered to be in the range of 10 nm to 100 nm. Various effects such as surface area and area to volume ratio and many other physical properties get magnified when reduced to nanoscale 1.

Most of the current research works in almost all technical and biomedical fields is based on nanosize. Nanoemulsions are thermodynamically stable transparent (translucent) dispersions of oil and water stabilized by an interfacial film of surfactant and cosurfactant molecules having a droplet size of less than 100 nm 2. Nanoemulsion, which is categorized as multiphase colloidal dispersion, is generally characterized by its stability and clarity. There is an application of high shear generally obtained by micro fluid or ultrasonic approach generally used to reduce the droplet size to nanoscale. Various works are done to correlate the different transdermal drug release from various delivery systems. Studies suggested that the drug release from various formulations such as solid lipid nanoparticles, nanoemulsion and polymeric nanosuspension, nanoemulsion proved to be efficient transdermal delivery vehicle.

The skin: The skin (cutis) is the largest human organ and an excellent biological barrier. Fig. 1 gives a pictorial representation of skin. They are normally less than ≤2mm thin, and contribute around 4% to a body weight. The outer skin part (epidermis) is in humans generally 0.02-0.2 mm, and 50-150μm, thin. The horny skin layer, of stratum corneum, is the main skin barrier to diffusion. The excellence of this lipid enhanced 4 obstacle to transport is best illustrated by the associated, steep water concentration reduction from around 75% in the viable epidermis to a 10- 30% at an air-exposed skin surface 5-7. Gender and body also affect skin surface pH, which is mainly below neutral 8 and slightly above pH=5 in humans.

FIG. 1: SKIN DRAWINGS (left: low magnification of the whole skin modified from Casella-Riedel de Haan textbook; right: a higher magnification of the epidermis with the stratum corneum, including a highlighted corneocytes cluster). The confocal-laser-scanning-microscopy visualization of the outer skin region in a cross-section is a blow-up from [22] and shows blood vessels and basal membrane (in red), cutaneous nerves, including the epidermal nerve fibers (in yellow), and epidermis, E, the papillary and the upper reticular dermis, D (in green)

The superficial pH is also ≥1 pH unit higher on excised skin in relation to a living organ 9. The layer below epidermis is known as dermis. It consists of the outer papillary and the inner reticular dermis, together are usually 5-20 times thicker than epidermis and thus normally measure up to 2 mm in thickness.  Cutaneous microvasculature provides the secondary skin barrier, by acting as a sink for the molecules that had diffused across the primary skin barrier.  The papillary dermis moreover contains relatively thin elastic elaunin fibers that are broadly perpendicular to skin surface. These fibers merge with the microfibrillar cascade (oxytalan fibers) and then intercalate into the dermal-epidermal junction.

The collagen fibers in the reticular dermis generally are thicker and largely parallel to skin surface. Dermal collagen forms continuous, elastic network and imparts mechanical elasticity to the skin from the reticular and papillary dermis and up to the epidermis 10. The dermis transitions seamlessly into the hypodermis   which together with the dermal fatty deposit helps to absorb mechanical shocks that might otherwise endanger skin vasculature and nerves. The same structures and deposits also contribute to skin elasticity. Owing to its unique biochemical and anatomical properties, each individual skin layer is mechanically different.

The stratum corneum is rather stiff. The underlying epidermis and papillar dermis are less resistant to mechanical stress (low-strain, static stiffness: 0.11kPa), reticular dermis having an intermediate stiffness. Owing to the voluminous nature of the reticular dermis, this layer normally dominates “skin mechanics”, also due to its coupling to the viscoelastic hypodermis that laterally dissipates locally imposed mechanical stress on skin 11. Being a tactile organ, the skin is also well innervated, yet contains only few myelinated nerve fibers. When the vertically oriented nerve bundles coming from the reticular epidermis enter the papillary dermis they form a horizontal sub-epidermal neural plexus. This plexus is the origin of very fine, non-myelinated epidermal nerve fiber branches that extend between keratinocytes to convey slow cutaneous nociception.

Natural pathways through the Skin Permeability Barrier: The relationship between the skin permeability and epidermal anatomy is not clear. It has not been known for long that hydrophilic transepidermal ‘aqueous pathways’—other than intracutaneous glands and follicles plays a vital role  in polar and amphiphilic molecules transport through skin barrier. Enhancement to the transdermal drug transport enhanced   by exposing the stratum corneum to a strong electrical current (electroporation/ iontophoresis), mechanical stimulus (e.g. sonoporation /sonophoresis), or thermal stimulus. Alternatively, but less irritatingly, suitable skin penetrants meet the same goal 12. The best known  are the largest “transcutaneous” hydrophilic  pores, such as hair follicles 13, or artificial skin micro-perforations, such as localized transport regions (LTR) created by electro- , sono-  or optoporation 14. Separation of transdermal pathways into quantitatively different hydrophilic “pore classes” is therefore difficult until now.  It is safe to posit, that hydrophilic conduits through skin barrier have effective openings between ≥5μm (skin appendages) and ≤10 nm (narrow intercorneocyte pores, Cevc, in preparation).

It is furthermore doubtless that sweat ducts (N50μm), pilosebaceous units (5-70μm), and sebaceous glands (5-15μm) represent the largest width/lowest resistance end of the range. Junctions of corneocytes-clusters and cluster boundaries fall within the range. Intracluster pathways, leading along lipidic lamellae for hydrophilic entities, or diffusion pathways, typically running within lipidic layer(s) for lipophilic molecules, form the small width/high resistance end of the range.  Diversity of calculated widths and pore expansions suggests that various entities or skin treatments may sense, or help generate, hydrophilic microconduits with different widths or width distributions within the skin permeability barrier.

All of them are in nano-dimensions. Lipophilic cutaneous barrier is more narrowly defined and, unlike the hydrophilic barrier, is governed by molecular weight and distribution coefficient rather than molecular size 15. The relative height of cutaneous lipophilic barrier consequently decreases with permeant's lipophily, but molecules heavier than 400-500 Da are in any case nearly completely confined to skin surface. The reason is inability of so large permeants to find sufficiently wide defects in the intercellular lipidic matrix to start diffusing through the lipidic parts of cutaneous barrier 16.

Thus, while targeting delivery systems the above mentioned points are taken to consideration. The delivery system is designed in such a way that it shows more permeation and less skin entrapment. The brief process for drug passage across the skin is shown in (fig. 2). The various carrier used to deliver the drug is also mentioned. The best possible carrier is the Nanoemulsion which has proved to be the better carrier than other drug delivery systems. 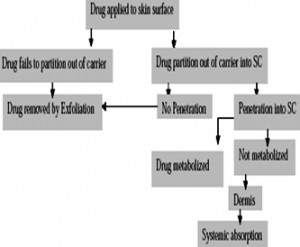 FIG. 2: PASSAGE OF DRUG THROUGH THE SKIN.

Various works has been done to correlate the different transdermal drug release from various delivery systems. Shakeel et al. suggested that the drug release of aceclofenac was done by various formulations such as solid lipid nanoparticles, nanoemulsion and polymeric nanosuspension. The work finally concluded that the in- vitro drug release was found to be optimum

Nanoemulsions: A novel drug delivery for transdermal treatment: Nanoemulsions are thermodynamically stable transparent (translucent) dispersions of oil and water stabilized by an interfacial film of surfactant and cosurfactant molecules having a droplet size of less than 100 nm16-17  as shown in (Fig 3). 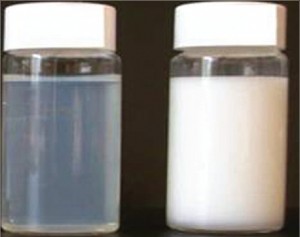 Many studies have shown that Nanoemulsion formulations possess improved transdermal and dermal delivery properties in- vitro, 20-21 as well as in- vivo 18-19. Nanoemulsions have improved transdermal permeation of many drugs over the conventional topical formulations such as emulsions and gels16, 17, 22. This present work describes the potential of Nanoemulsion systems in transdermal delivery of Flurbiprofen  using nonirritating, pharmaceutically acceptable ingredients without using additional permeation enhancers, because excipients of Nanoemulsion themselves act as permeation enhancers. The formation and stabilization of nanoemulsion is the topic to be discussed, nanoemulsion are highly stabilized system thus the composition of the nanoemulsion plays a vital role in the in its formation and stabilization. The selection of proper oil, surfactant and cosurfactants is crucial. In this topic an overview of the theory and principle behind the formation of the nanoemulsion is discussed. 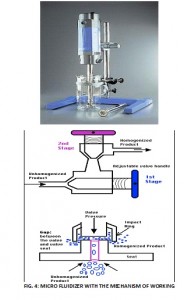 FIG. 4: MICRO FLUIDIZER WITH THE MECHANISM OF WORKING 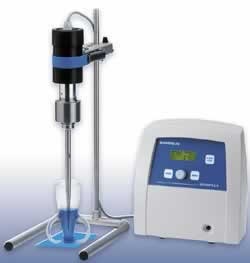 It is well known that increasing the external pressure increases the cavitations threshold within an ultrasonic field and thus fewer bubbles form. However, increasing the external pressure also increases the collapse pressure of cavitations bubbles. This means that the collapse of the bubbles when cavitation occurs becomes stronger and more violent than when the pressure is at atmospheric conditions. As cavitation is the most important mechanism of power dissipation in a low frequency ultrasonic system, these changes in navigational intensity can be related directly to changes in the power density. The system also uses a water jacket to control the temperature to optimum level 26.

Theory of the formation of Nanoemulsion 28: In Nanoemulsion which is categorized as multiphase colloidal dispersion which is generally characterized by its stability and clarity. There is an application of high shear generally obtained by micro fluid or ultrasonic approach generally used to reduce the droplet size to nanoscale. There is a marginal difference between the terms Nanoemulsion and microemulsion also known as micellar phase or mesophase.

The microemulsion generally forms through thermodynamic self assembly whereas nanoemulsion requires external shear for rupturing the droplets. In retrospect, the historical choice of the word “microemulsion” to describe the nanoscale is unfortunate since they are structurally between 1 to 100 nm as for Nanoemulsion. Micro emulsions are not the emulsions of micro scale droplets. They are formed by self assembled equation phase in which the surface tension dose not play a significant role.28 The Nanoemulsions underlines the basic principle in its formulation. They generally comprises of two immiscible phase with an interfacial tension between them reduced by addition of surfactant.

Stability factors of Nanoemulsion: As a general consideration the stability of nanoemulsion largely depends upon the following factors;

Laplace pressure: At a low volume of dispersed phase (φ) an isolated droplet with a curved radius (a). The curved interface formed due to surfactant exerts a pressure on the molecule inside the droplet. This pressure is called the Laplace pressure (ΠL). For non-spherical droplets, ΠL is proportional to the sum of the inverse of the two principal radii of curvature of the interface. Due to the inverse dependence of ΠL on a, the molecules in smaller droplets experience a higher pressure than those in larger droplets.

The formulation of Nanoemulsion involves stress applied (τ) which should exceed the Laplace pressure inorder to stretch and break the droplet to smaller size.

As per above consideration,

In general, due to the presence of high quantity of surfactants in continuous phase as soon as the interfacial area is created by shear surfactant coats the interface.

Factors affecting the formulation of Nanoemulsion:

Formulation of nanoemulsion by spontaneous emulsification method can be done when the interfacial tension is low enough such that increase in the free energy due to creation of free surface can be compensated by increasing the entropy. This is the reason behind the consumption of large amount of the surfactant.

The result obtained from the study of the skin done by FTIR and DSC showed a marked difference in the skin composition of the treated and untreated skin with nanoemulsion. It was found that the breaking of the tight hydrogen bonding between proteins and lipids in the subcutaneous layer as the main changes shown in the study. These alterations results in the disruption of the lipid layer, thus producing distinct void spaces in the epidermis. Further histopathological study clearly showed the morphological changes in the epidermal layer.