NANOENCAPSULATION OF NSAIDs NAPROXEN AND IBUPROFEN

NANOENCAPSULATION OF NSAIDS NAPROXEN AND IBUPROFEN

ABSTRACT: Naproxen and Ibuprofen, two non-steroidal anti-inflammatory drugs, are frequently prescribed in modern medicine. In this study, nanoencapsulation by solvent evaporation technique is used to formulate Naproxen and Ibuprofen loaded poly(DL-lactide-co-ε-caprolactone) nanospheres by means of Tween 80 and Span 80 as surfactant and co-surfactant respectively. Different formulations are prepared with different drug masses and same quantities of polymer and surfactants. This was done in order to evaluate the effect of the mass variation of the two drugs on the characteristics of the prepared nanospheres. The prepared nanospheres are studied for drug entrapment and drug loading efficiencies, particle size, morphology, FT-IR analysis and in vitro release. As a result, all nanospheres presented a spherical profile and homogeneous size distribution. Naproxen revealed the highest drug entrapment efficiency. FT-IR analysis showed no interaction for both drugs with the polymer. In vitro release of drugs from encapsulated PLC nanospheres showed that Ibuprofen release was faster than Naproxen release. Also the in vitro release was faster for formulations having the lowest amount of drug loaded.

INTRODUCTION: Recently, nanotechnology has been associated with many scientific uses. However, it remains under research and exploration in biomedical and pharmaceutical fields 1. There are several factors that favor using polymeric nanospheres as carriers for pharmaceutical agents into the body. These reasons include 1, 2:

Although nanospheres have many advantages, some inconveniences regarding their use are due to their small size and large surface area such as particle-particle aggregation, limited drug loading and burst release. Several main nanocarriers are used as drug delivery systems in the biomedical and pharmaceutical fields such as liposomes, polymeric micelles, dendrimers, carbon nanotubes, and polymeric nanoparticles 3 - 5. One of the most common methods for the preparation of nanoparticles based on the usage of biodegradable polymers, such as from Polylactic acid, Polylactic-co-glycolic acid and Poly caprolactone is the preformed polymer dispersion by the solvent evaporation technique 6. The biodegradable polyester poly (DL-lactide-co-ε-caprolactone) (PLC) was used in this study for the preparation of nanospheres. PLC is biodegradable and biocompatible aliphatic polyester used as carriers in controlled delivery for a wide range of drugs 7.

Non-steroidal anti-inflammatory drugs (NSAIDs) are among the most frequently prescribed drugs in modern medicine. NSAIDs are very effective in the relief of pain or the reduction of fever and inflammation 8. Two NSAIDs were chosen in this study, Naproxen (Nap) and Ibuprofen (Ibu) (Fig. 1). The use of Nap is limited by its short duration of action when administrated orally and has some side effects such as mucosal damage. As for Ibu, most frequent side effects are gastro-intestinal disturbance and bleeding, ulceration, and hypersensitivity. Advances in nanotechnology have reduced these side effects by the development of new polymeric nanospheres as drug carriers systems. Nanospheres polymeric coating is important in hindering any link of these drugs to the stomach membrane and maintaining a low and constant level of drug in the blood 9, 10.

Two types of nanospheres using PLC will be synthesized by the polymer dispersion method for Nap and Ibu encapsulation. Tween 80 and Span 80 are used as surfactant and co-surfactant respectively. These two surfactants present many uses such as solubilisers, dispersants, and wetting agents 11, 12. The prepared nanospheres will then be and evaluated for several characteristics.

Method Description: Preformed Polymer dispersion by the solvent evaporation method was used for the preparation of nanospheres containing Nap and Ibu. Different formulations of the two drugs were prepared by changing drug mass between 0.6 to 3.5 mg. As for the polymer and the surfactants, their masses were fixed respectively to 200 mg and 300 mg.

The organic phase consisted of PLC dissolved in 40 ml of acetone with Span 80 and the relevant drug mass. This was poured into 80 ml of an aqueous phase containing Tween 80. The solution which turns immediately milky as a result of the formation of nanoparticles was stirred for 3 hours. Acetone was finally removed using a rotary-evaporator (RE 200, Bibby Sterlin Ltd., UK) and the colloidal suspension concentrated to a final volume of 20-30 ml. This final suspension was centrifuged for 20 min with a high speed centrifuge (HERMLE Laboratory, Germany) at 16000 rpm to collect the nanospheres. Finally, the collected nanospheres were dried in an oven for 48 hours at 40 ºC and the clear supernatant was reserved for the characterization tests 13.

Drug Encapsulation and Drug Loading: Encapsulated drug was calculated by subtracting the free drug in supernatant from the total drug introduced. The total drug introduced was calculated according to the used mass of drug. Free drug was determined from the clear supernatant, reserved from the centrifugation after separating the nanospheres from the aqueous medium. 2 ml of the supernatant were diluted in 20 ml of deionized water and analyzed with a UV/Vis spectrophotometer (Microplate Spectrophotometer, Epoch, Biotek, USA) at 332 nm for Nap and 264 nm for Ibu. % DE and %DL were calculated according to the following equations:

Particle Size: To determine the particle size of the prepared nanospheres, a small quantity of each sample is suspended in distilled water. Laser diffraction granulometer (LA950V2, Horiba instrument Ltd., France) was used for this study. The size distribution of nanospheres was determined, and the average particle size was calculated and expressed in nm.

FT-IR Analysis: To verify the absence of any possible chemical interaction between the drug and the polymer, FT-IR analysis (Frontier, Perkin Elmer, USA) was carried out for the prepared formulations. KBr pellets method was used. It is based on grinding and mixing each sample to be tested with KBr to form a very fine powder. The powder is then compressed using a manual hydraulic press into a thin pellet reading for testing.

In-vitro Study: 10 mg nanospheres were incorporated in a dialysis bag having a molecular weight cut off 12000-14000. The dialysis bag was immersed in 5 mL PBS (0.01 M, pH=7.4) used as release medium and incubated at 37 ºC in thermostat water bath. At specific time intervals, 1 mL of the release medium were withdrawn and replaced with 1 mL of fresh solution. Drug content was evaluated at 332 nm and 264 nm for Nap Ibu respectively.

Nanospheres Preparation: The polymer dispersion technique was used to formulate Nap- and Ibu-loaded PLC nanospheres. 200 mg of PLC and 300 mg of both surfactants were used; the quantity of drug was varied between 0.6 and 3.5 mg. The drug formulations were referenced N1 to N5 for Nap and I1 to I5 for Ibu. Acetone was used as the organic solvent dissolve PLC and the drug forming an organic phase.

The percentage of encapsulation (% DE) and loading (% DL) of the different drug formulations are represented in Table 1.

The variation of % DE and % DL among the prepared nanospheres formulations of the two drugs are illustrated in Fig. 2 and 3 respectively. 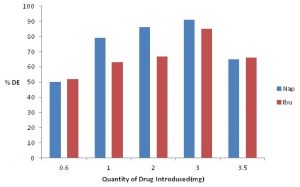 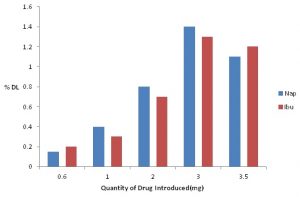 Particle Size: Table 2 represents the average size of Nap and Ibu nanospheres formulations. For both drugs formulations, the size range is between 60 and 95 nm. 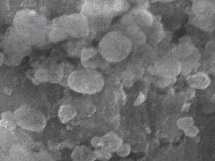 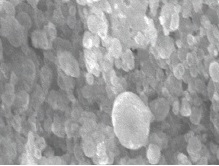 Drug-polymer Interaction: The absence of drug-polymer interaction in the prepared nanospheres was studied by FT-IR spectroscopy. Spectra were recorded for the polymer PLC, the two drugs Nap and Ibu and drug-loaded nanospheres (Fig. 5 to 9).

In vitro Study: The in vitro release profile of Nap and Ibu with time is presented Fig. 10 and 11 respectively. 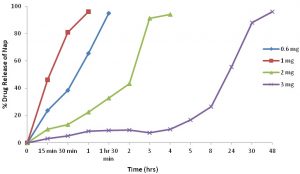 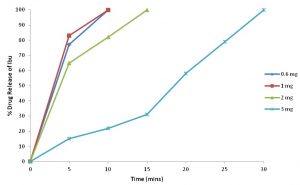 DISCUSSION: In this study, the preformed polymer dispersion by the solvent evaporation technique was used to encapsulate the two NSAIDs Nap and Ibu into PLC nanospheres. This technique was chosen for different reasons 14:

Incorporation of drug into PLC nanospheres required the use of Tween 80 as surfactant and Span 80 as co-surfactant. These two different surfactants have several roles 14, 15:

Many factors influence the properties of the nanospheres such as the nature of used materials, the quantity of drug in the dispersed phase, the concentration of surfactant and the operating conditions (agitation, temperature, pressure) 9, 14. In our study, the only variable factor is the quantity of each drug in the dispersed phase which affects the nanospheres properties.

The comparison between the % DE and the % DL of nanospheres formulations relatively to the introduced mass of drug reveals that the formulations N4 and I4 show the highest % DE and % DL as shown in Table 1 and Fig. 2 and 3 respectively. Polymer properties, as precipitation is an important factor that affects drug encapsulation. Most attempts are based on a common idea that fast polymer precipitation on the surface of the organic phase can prevent drug loss into the aqueous phase increasing the encapsulation efficiency 16. Nap-loaded nanospheres have more entrapment than Ibu-loaded nanospheres. In fact, the precipitation process of Nap is faster and its loss into the aqueous phase is prevented. However, this is not the case of Ibu. The latter diffuses more into the aqueous phase during the nanospheres formation, which explains the observed results.

Nap- and Ibu-loaded nanospheres have the same particle size ranging from 60 to 95 nm (Table 2).  This observation is due to the fact that the two kinds of nanoparticles were prepared under the same experimental conditions. In addition, the surface morphology of nanospheres analyzed using SEM shows that all prepared formulations have a spherical profile (Fig. 4). This proves the efficiency of the solvent evaporation technique in formulating homogeneous and reproducible nanoparticles.

Moving to the in vitro study, the drug release rate in general depends on several factors 2:

Concerning nanospheres, where the drug is evenly distributed, the release occurs by diffusion or degradation of the matrix. This release is related to the experimental conditions. The drug release mechanism is based on a diffusion process when it is faster than matrix degradation especially for drugs with low molecular weight. The rapid initial burst occurs mainly due to weakly bound or adsorbed drug to the surface of nanoparticles 2.

A comparison of drug release from formulations containing different drug loadings is done in this study. Formulations N5 and I5 were omitted from the study because their %DL are very close to those of N4 and I4. In vitro release profiles of Nap and Ibu containing different drug loading are shown in Fig. 10 and 11. The release rate increases when the drug loading increases for the two types of drugs. The release or “burst” is found to be fast for formulations having the lowest amount of drug loaded (Table 3).

On the other hand, the release is slow when higher quantity of drug is present in nanospheres, so the drug takes longer time to escape into the release medium. This result is confirmed for both drugs, where the formulations having the highest drug loading are characterized by the slowest release. Comparing the two drugs, the release of Ibu is faster than that of Nap. % DE of Ibu is lower than that of Nap which indicates that it is weakly adsorbed on the large surface of PLC nanoparticles, and explains the rapid initial burst of Ibu 17.

Another reason is that the matrix of PLC nanoparticles is hydrophobic inducing a low permeability of water across it. In the case of Nap, it has a strong interaction with the polymer due to its structure, which makes its dissolution in water difficult and retards its release 18.

CONCLUSION: Nanoparticles based on biodegradable polymers are useful carrier systems for the delivery of many drugs to specific body sites. They have many advantages including their extended release properties, size and biocompatibility. Naproxen and Ibuprofen were successfully encapsulated into PLC nanospheres using the solvent evaporation technique. Nanospheres were spherical in profile with a homogeneous size distribution. Naproxen gave higher % DE than Ibuprofen due to the excessive diffusion of Ibuprofen in the aqueous phase during nanoprecipitation and due to the lower molecular weight of Ibuprofen. As for the FT-IR analysis, no interaction between the drugs and PLC was shown. The in vitro release was fast for formulations having the lowest %DL and was faster for Ibuprofen than for Naproxen.

ACKNOWLEDGEMENT: This study was done with the support of the Department of Chemistry at the University of Balamand that helped in carrying out the research work and providing the needed chemicals and equipment.