ABSTRACT: Nanogels (NGs) are advanced and innovative drug delivery systems that play an important role in remarking many issues that are associated with recent and trendy courses of treatment, such as non-specific effects and low stability. NGs could be well-defined as extremely cross-linked hydrogels (nano-sized) ranging from 20-200 nm. NGs are vigorous nanoparticles (NPs) used to deliver active drug complexes for the controlled delivery of drugs. This system is simpler and safer for both hydrophobic and hydrophilic drugs because of their chemical composition and formulations that are unsuitable for different formulations. Drugs are incorporated into NGs for many purposes, like gene targeting, organ targeting, diagnosis, and many more. NGs can be administered through different pulmonary, nasal, transdermal, intra-ocular, oral, and parenteral routes. Frequently, NGs are used to treat cancer, bone regeneration, inflammation, etc. This NGs system is a novel drug delivery system for hydrophobic and hydrophilic drugs. This review mainly focuses on providing general information on NGs, their properties, various classifications, drug targeting methodology, different types of drug delivery systems, evaluation methods and novel applications of NGs in detail.

INTRODUCTION: NGs are three-dimensional (3D) structures made up of physically or chemically cross-linked polymers with amphiphilic or hydrophilic molecular chains, as shown in Fig. 1. It maintains the structure intact because NGs are ready to swell by holding an excellent quantity of water with no dissolving.

The good water content correlates with the fluid-like transport properties for the biologically active molecules that are considerably smaller than the gel pore size 1. NPs have some advantages over conventional formulations, such as controlled drug release, resistance to degradation, delayed elimination, stimuli-responsive behaviour, and so on 2, 3, 4.

Moreover, NGs-based nanomedicines should fulfill all the desires of drug delivery systems to make sure maximum therapeutic impact with minimal side effects, stable covalent bonds or, less preferably, encapsulation of the active substance must be guaranteed 3, 4, 5. NGs are often administered with two basic methods, such as passive and active targeting. In passive targeting, NGs show drug release concerning the surface charge, size, swelling, and other physicochemical properties.

On the other hand, in active targeting, NGs conjugate with specific moieties that precisely identify and bind to several over-expressed receptors at the targets 3, 4, 6. 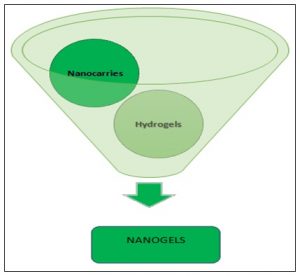 Nanogels Classification: NGs are frequently classified into many classes that support their behaviour to environmental stimuli, the presence of some linkage, supported polymers consistent with their structure, and supported preparation techniques, which are shown in Fig. 2. 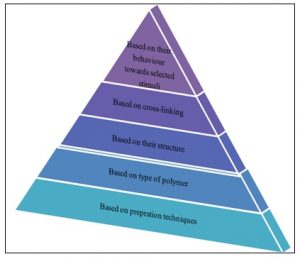 Stimuli-responsive Nanogels are Many types:

Nanogels-Based Drug Release Mechanism: There is more than one mechanism in which drug release or the bio-molecule is as well as simple diffusion, temperature, pH and the extent of transition of NGs as shown in Fig. 3 15. 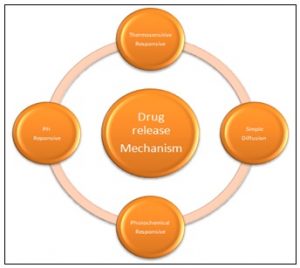 Drug Targeting via Nanogels: NGs have been used for the most effective treatments for superficial acute diseases, but they have also entered the important class of deadly disease therapies. Nowadays, these transport systems are curing mental disorders, lung and liver disorders, cancer, skin diseases, joint disorders, ophthalmic disorders, wound restoration and vaccine delivery. In addition, corresponding NGs have additionally entered the field of diagnostic imaging. Many NGs formulations have been patented in several countries for diverse diseases. Hydrogel with a polymeric nanocarrier system has a very promising ability to improve the bioavailability of such poorly permeable tablets. In the field of brain shipping, NGs have been developed for numerous degenerative disorders in addition to brain cancer 17.

Skin Disorders: The NGs can be immediately carried out on the affected parts of the body. The drug's permeability enhancement is better by the drug’s conversion into the size range of NPs. When compared to the existing gel, the zinc oxide NPs are incorporated into the gel to improve the antibacterial efficacy of the drug by using this method. Another study found high psoriatic activity by preparing methotrexate-loaded chitin NGs 2.

Cancer: Many anti-cancer drugs are repeatedly used in cancer treatment. However, they have indicated shortcomings that offer hindrances to most cancers' effective remedy. Some of the shortcomings are poor permeability, much less bioavailability, less retention time, and quicker excretion of drugs.

To reduce these shortcomings, NGs loaded with anti-cancer drugs were prepared with N-hexylcarbamoyl-5-flurouracil-loaded NGs for brain cancer treatment and were found to have high retention time and accumulation in the brain 2.

Healing of Wounds: NGs are amongst the satisfactory carriers to incorporate when considering the topical application of drugs. Presently, it's thought that wounds with a wet environment show higher healing compared to dry dressing. NGs, which are gels, offer the best choice for wet dressing as the recovered tissue quality is best in wet (moist) dressing wounds. Furthermore, the hydrogel NPs (i.e., NGs) provides a cooling effect and help reduce swelling and erythema by reducing capillary circulation at the application site 6.

Vaccine Delivery: As a vaccine, NGs may also be active and can provide some advantages, like reduced inflammatory cytokines, induced toxicity, and enhanced immunity. Vaccination is specific to antigen immune response by using organic agents that can be weaker or kill microbes or resemble disorder causing microorganisms 6.

The Anatomy of a Drug Delivery Vehicle:

Photolithographic Method: In this method, for drug delivery, the subsequent reaction and phytochemical reaction for activation have been discovered in an attempt to produce NGs and 3D hydrogel particles. To achieve the specific properties of the surface, replica molds and stamps are treated or released the incorporated agents by the molded gels allowed 2, 17.

Emulsion Solvent Diffusion Method: In this method for drug delivery, correctly weigh the polymer, drug and stabilizer, then dissolve in glycerol with continuous stirring.

On heating, the aqueous phase-gelling agent is dissolved in water with continuous stirring. Ultrasonicate the drug-containing phase and dropwise add the drug phase to the aqueous phase. It is converted into emulsion form by homogenization. Homogenizer at 5000-8000 rpm for 1 hour reduces emulsion in nanodroplets. After this, the O/W emulsion is formed, increasing the preparation efficiency, and the pH is adjusted 2, 19.

Coacervation Polymerization Method: This method employs the physicochemical characteristics of polymers involved in formulation. In alkaline solutions, chitosan becomes precipitated but insoluble in alkaline PH media. Particles are produced by blowing chitosan solution into coacervate droplets of NaOH-methanol using a compressed air nozzle into an alkaline solution such as sodium hydroxide (NaOH). A compressed nozzle spray controls the particle size of the polymer-containing drug. The separation of particles is carried by centrifugation or filtration and washed with cold and hot water. To control a drug's release, they used a cross-linking agent 2, 17, 20.

Emulsion Cross-Linking Method: The method is totally based on the cross-linking of polymers and cross-linking agents. The dispersion of the aqueous solution of polymer in the oil phase (w/o) emulsion is prepared. This method adds a surfactant and a cross-linking agent to stabilize the solution and harden the droplets. And then, the NGs are washed with organic solvents and dried 2.

Emulsion-droplet Coalescence Method: This method is obtained by a slight modification in the precipitation and emulsion cross-linking methods. By allowing the coalescence of polymer droplets, they become precipitated with the involvement of the cross-linking method. The aqueous polymer solution is emulsified by using suitable oil. In alkaline pH, the emulsion is prepared by using the same polymer-containing drug. Then both the emulsions are mixed by using high speed homogenization. Then the particles are separated by centrifugation, washed and dried 2, 17.

The Emulsion Polymerization Method: According to the type of continuous phase, emulsion polymerization can be divided into-

Ionic Gelation Method: The interaction of an ionic polymer with an oppositely charged ion initiates cross-linking. Two methods are involved in generating the hydrogel beads through the Ionotropic gelation technique.

External Ionotropic Gelation: The position of the cross-linker ion is external.

Internal Gelation / Emulsification: In the inactive form, the cross-linker ion is incorporated within the polymer solution 17, 21.

Desolvation Method: In this method, gelatin is dissolved in double distilled water with heating and continuous stirring. After heating, the solution is allowed to stand at room temperature for 10 minutes. Ethanol is added for precipitation. After this, the aging geletin dissolves in double distilled water containing the drug. Then the solution is stirred at 500-1000 rpm for 8 hours. After stirring, the solution is centrifuged and the settled NPs are collected and washed. Other preparation methods include the Reverse micro emulsion polymerization method, the Inverse mini emulsion polymerization method, the Solvent emulsification method, the Solvent Displacement method, and the Modified Pullulan method 2, 17, 20, 21.

Swelling Studies/Pulsatile Swelling Studies: It is the most important parameter of all NGs, and swelling is characterized by measuring their capacity to absorb water or an aqueous solution. To measure the weight with the swelling degree being calculated from the portion weight of the swollen NGs or the initial weight is the easy way to determine the kinetics and swelling equilibrium of NGs various factors, like the type and composition of the monomer, cross-link density, pH, temperature and ionic strength, influence the swelling of NGs. The pH-responsive behaviour of hydrogel beads was confirmed by a pulsatile swelling study 5, 22.

The swelling was highest at acidic pH compared to neutral, acidic and alkaline conditions 25.

In-vitro Drug Release of Nanogels: To regulate the therapeutic effectiveness of the NGs formulation by in-vivo study. A dissolution tester is used to test the behaviour of the release rate of drug from the hydrogel. The study of the release of drugs was carried out in 900 ml of acidic medium (pH 1.2) and alkaline medium (pH 7.4 phosphate buffer) at 37.0 ± 0.5 C and 50 rpm speed. At different time intervals, 5 ml samples were withdrawn and replaced with the same volume of fresh solution.

The test samples were filtered by using a membrane filter, and the amount of released drug was analysed using a UV–visible spectrophotometer at the desired wavelength after suitable dilutions. The in-vitro drug release study was done at two pH values, physiological and acidic, since the skin pH as well as that at the tumour site is in the acidic range (4-5), the chitin NGs was shown to have higher swelling at acidic pH.

The drug concentration in the sample is calculated against known standards via the area method under the absorption time curves. The loading efficiency is calculated by using the formula given below:

TABLE 1: THE LIST OF ANTI-CANCER DRUGS INCORPORATED INTO NANOGELS

TABLE 2: THE LIST OF TRANSDERMAL DELIVERY DRUG INCORPORATED INTO NANOGELS

TABLE 3: THE LIST OF PROTEIN AND PEPTIDE DRUG INCORPORATED INTO NANOGELS

TABLE 4: THE LIST OF OCULAR DRUG INCORPORATED INTO NANOGELS

TABLE 5: THE LIST OF ANTI-INFLAMMATORY DRUG INCORPORATED INTO NANOGELS

TABLE 6: THE LIST OF BRAIN DELIVERY OF DRUG INCORPORATED INTO NANOGELS

TABLE 7: THE LIST OF EYE DELIVERY OF DRUG INCORPORATED INTO NANOGELS

TABLE 8: THE LIST OF VACCINE DELIVERY OF DRUG INCORPORATED INTO NANOGELS

TABLE 9: THE LIST OF ANAESTHETICS DRUG INCORPORATED INTO NANOGELS

CONCLUSION: In this review, we focused on the properties, classification, drug targeting or evaluation methods, and applications of NGs in detail. NGs can achieve an efficient drug delivery system. NGs are categorized according to their behaviour towards selected stimuli, cross-linking, and structure. Some preparation methods, such as photolithographic techniques, the Emulsion solvent diffusion method, coacervation/ precipitation / precipitation polymerization, etc., were also discussed.

ACKNOWLEDGMENT: The manuscript was written through the contributions of both authors.