NANOSUSPENSION: AN ATTEMPT TO ENHANCE BIOAVAILABILITY OF POORLY SOLUBLE DRUGS

NANOSUSPENSION:  AN ATTEMPT TO ENHANCE BIOAVAILABILITY OF POORLY SOLUBLE DRUGS

Most of the new chemical entities coming out from High-throughput screening in drug discovery process are failing due to their poor solubility in the water. Poorly water-soluble drugs show many problems in formulating them in conventional dosage forms. One of the critical problems associated with poorly soluble drugs is too low bioavailability. The problem is even more complex for drugs belonging to BCS CLASS II category, as they are poorly soluble in both aqueous and organic media, and for those drugs having a log P value of 2. There are number of formulation approaches to resolve the problems of low solubility and low bioavailability. These techniques for solubility enhancement have some limitations and hence have limited utility in solubility enhancement. Nanotechnology can be used to resolve the problems associated with these conventional approaches for solubility and bioavailability enhancement. Nanotechnology is defined as the science and engineering carried out in the nanoscale that is 10-9 meters. The present article describes the details about nanosuspensions. Nanosuspensions consist of the pure poorly water-soluble drug without any matrix material suspended in dispersion. The review article includes the methods of preparation with their advantages and disadvantages, characterization and evaluation parameters and pharmaceutical applications. A nanosuspension not only solves the problems of poor solubility and bioavailability but also alters the pharmacokinetics of drug and thus improves drug safety and efficacy.

INTRODUCTION: Most of the new chemical entities (about 40%) coming out from High-throughput screening in drug discovery process are failing due to their poor solubility in the water 1. As per a recent report 2, 46% of the total New Drug Applications (NDA) filed between 1995 and 2002 were BCS class IV, while only 9% were BCS class I drugs, revealing that a majority of the approved new drugs were water insoluble Because of their poor solubility it will become more complicated to incorporate them into the conventional dosage forms and thus decreasing the bioavailability of the drugs 3.

The problem is even more complex for drugs such as Glibenclamide (belonging to BCS CLASS II) as classified by BCS System 4 as they are poorly soluble in both aqueous and organic media, and for those drugs having a log P value of 2. For class II drugs, the rate limiting factor in their intestinal absorption is dissolution/solubility and thus the performance of these drugs is dissolution rate-limited and is affected by the fed/fasted state of the patient. Dissolution rates of sparingly soluble drugs are greatly affected by the shape as well as the particle size of the drug. Therefore decrease in particle size results in an increase in dissolution rate 5. There are number of formulation approaches that can be used to resolve the problems associated with the low solubility and low bioavailability of these class II drugs. Some of the approaches to increase solubility include micronization 6, solubilisation using co-solvents, use of permeation enhancers, oily solutions, surfactant dispersions 6, salt formation 7 and precipitation techniques 8-9.

However, there still remains an unmet need to equip the pharmaceutical industry with particle engineering technologies capable of formulating the poorly soluble drugs to improve their efficacy and to optimize therapy with respect to pharmacoeconomics. One such novel technology is nanosuspension technology. Nanosuspensions are sub-micron colloidal dispersions of nanosized drug particles stabilized by surfactants 14. Nanosuspensions consist of the poorly water-soluble drug without any matrix material suspended in dispersion 15. These can be used to enhance the solubility of drugs that are poorly soluble in aqueous as well as lipid media. As a result of increased solubility, the rate of flooding of the active compound increases and the maximum plasma level is reached faster.

This is one of the unique advantages that it has over other approaches for enhancing solubility. This approach is useful for molecules with poor solubility, poor permeability or both, which poses a significant challenge for the formulators. The reduced particle size renders the possibility of intravenous administration of poorly soluble drugs without any blockade of the blood capillaries. The suspensions can also be lyophilised and into a solid matrix. Apart from these advantages it is also having the advantages of liquid formulations over others. In the present review we are mainly focussing on the different methods of preparation, critical parameters and evaluation of the nanosuspension. Fig. 1 shows some of the nanosuspensions 16. 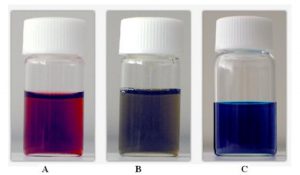 Preparation of Nanosuspensions: Preparation of nanosuspensions were reported to be a more cost effective and technically more simpler alternative than liposomes and other conventional colloidal drug carriers, particularly for poorly soluble drugs and yield a physically more stable product. The simplest method of preparation of nanosuspensions is micronization by colloid or jet milling 20, which improves the dissolution rate but is not having any effect on saturation solubility. Nanosuspension engineering processes currently used are preparation by precipitation, high pressure homogenization, emulsion and milling techniques. These techniques and the obtained compounds are summarized in Table 2 and are briefly described in the following sections. Mainly there are two methods for preparation of nanosuspensions. The conventional methods of precipitation are called ‘Bottom Up technology’. The ‘Top Down Technologies’ are the disintegration methods and are preferred over the precipitation methods. These include Media Milling (Nanocrystals), High Pressure Homogenization in water (Dissocubes), High Pressure Homogenization in nonaqueous media (Nanopure) and combination of Precipitation and High-Pressure Homogenization (Nanoedege). Few other techniques used for preparing nanosuspensions are emulsion as templates, microemulsion as templates etc.

This is accomplished by a combination of rapid precipitation and high-pressure homogenization. Rapid addition of a drug solution to an antisolvent leads to sudden super saturation of the mixed solution, and generation of fine crystalline or amorphous solids. Precipitation of an amorphous material may be favored at high super saturation when the solubility of the amorphous state is exceeded. The success of drug nanosuspensions prepared by precipitation techniques has been reported in some journals 32-33.

The principle of this method is based on cavitation in the aqueous phase. The particles cavitations forces are sufficiently high to convert the drug microparticles into nanoparticles. The concern with this method is the need for small sample particles before loading and the fact that many cycles of homogenization are required 38-39. Figure 2 gives the schematic representation of the high-pressure homogenization process 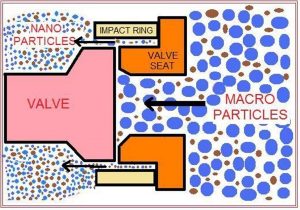 Many soluble polymers and co-polymers such as PVP, polyethylene glycol (PEG), hydroxypropyl methylcellulose (HPMC) and cyclodextrin derivatives have been used 43. Physicochemical properties and dissolution of poorly water soluble drugs were improved by co-grinding because of an improvement in the surface polarity and transformation from a crystalline to an amorphous drug 44. Dry co-grinding can be carried out easily and economically and can be conducted without organic solvents. The co-grinding technique can reduce particles to the submicron level and a stable. Table 3 shows some drugs and their status in market.

TABLE 3: SOME DRUGS AND THEIR STATUS IN MARKET

As the particle size decreases the adhesive properties of the particles will be improved and thus improved oral delivery of poorly soluble drugs. Improved bioavailability, improved dose proportionality, reduced fed/fasted variability, reduced inter-subject variability and enhanced absorption rate (both human and animal data) 46 are some of the main effects observed on oral administration. These data have been acquired in vivo in animals but also in humans as reported by the company Nano Systems. A drastically remarkable report is that of the increase in bioavailability for danazole from 5 % (as macrosuspension) to 82% (as nanosuspension) 46. The application of high pressures during the production of nanosuspensions was found to promote the amorphous state 47. The degree of particle fineness and the fraction of amorphous particles in the nanosuspensions were found to be dependent on production pressure number of cycles of homogenisation and hardness of drug. The increase in the amorphous fraction leads to a further increase of the saturation solubility. The homogenization process (giving uniform particle size) was able to overcome Ostwald ripening 48 which means physical long-term stability as an aqueous suspension 49.

In oral drug administration, the bioavailability mainly depends upon the solubility of the drug, highly active compounds have failed in the past because their poor solubility has limited in vivo absorption and did not lead to effective therapeutic concentrations. As an example, Atovaquone is given orally three times 750 mg daily, because of the low absorption of only 10–15%. Oral administration of nanosuspensions can overcome this problem because of the high adhesiveness of drug particles sticking on biological surfaces and prolonging the absorption time.

Evaluation of Nanosuspensions 50-51: The characterisation of the nanosuspensions is also similar to that of the suspensions such as colour, odour, presence of impurities and other important characteristics as mentioned below.

APPLICATIONS: Formulating the drug as nanosuspensions increases the saturable concentration, dissolution rate as well as bioavailability of the drug. These nanosuspensions are having application in different routes of administrations like oral, parenteral, topical, ophthalmic, mucoadhesive, pulmonary and targeted drug delivery. Oral administration of nanosuspensions is a drug delivery strategy, not only to improve bioavailability, but also to target gastrointestinal bacterial and parasitic infections because of improved adhesion properties. Nanosuspension technology is considered as suitable new colon delivery systems for the treatment of colon cancer, helminth infections, gastrointestinal inflammation or GIT associated diseases like sprue (zoeliaki).

Infections like tuberculosis, listeriosis, leishmaniasis, and toxoplasmosis are caused by parasites residing the macrophages of the MPS, thus being relatively easily accessible by I.V. injected particles. The I.V. injected particles are heavily and quickly taken up by the MPS cells in case they absorb uptake promoting proteins like apolipoproteins. However, some parasites do also reside in the brain (CNS). The brain-localized parasite mostly leads to relapsing infections if not cured. Therefore, it would be of importance to target drug nanoparticles via surface modification to the brain. A successful targeting of the peptide, dalargin, to the brain using Tween 80® surface modified polyisobutylcyanoacrylates nanoparticles has been reported by Kreuter et al. 56. A nanosuspension of Amphotericin B developed by Kayser et al. showed a significant improvement in its oral absorption in comparison with the conventional commercial formulations 57. In case of I.V administration the particle size less than 5µm is preferred. The particle size in nano range will favour the passage of the drug particles into the small capillaries in the body without any blockade. A stable intravenously injectable formulation of omeprazole has been prepared to prevent the degradation of orally administered omeprazole 37.

Aqueous suspensions of the drug can be easily nebulised and given by pulmonary route as the particle size is very less. Different types of nebulisers are available for the administration of liquid formulations. Some of the drugs successfully tried with pulmonary route are budesonide, ketotifen, ibuprofen, indomethacin, nifedipine, itraconazole, interleukin-2, p53 gene, leuprolide, doxorubicin etc. 58 Nanosuspensions can be used for targeted delivery also as the surface of the particle can be suitably modified to make them target specific. Kayser formulated a nanosuspension of Aphidicolin to improve drug targeting against leishmania-infected macrophages 26. Scholer et al. Prapeared a nanosuspension formulation of Atovaquone and showed an improved drug targeting to the brain in the treatment of toxoplasmic encephalitis in a new murine model infected with Toxoplasma gondii 55.

CONCLUSIONS: Nanosuspensions are chiefly seen as vehicles for administering poorly water soluble drugs have been largely solved the dissolution problems to improve drug absorption and bioavailability. Nanosuspension technology can be combined with traditional dosage forms: tablets, capsules, pellets, and can be used for parenteral products. They have recently received increasing attention as colloidal carriers for targeted delivery of various anticancer drugs, photosensitizers, neutron capture therapy agents or diagnostic agents. Because of their submicron size they are easily targeted to the tumour area. Moreover the possibility of surface functionalization with a targeting moiety has open new avenues for targeted delivery of drugs, genes, photosensitizers and other molecules to the desired area. To take advantage of nanosuspension drug delivery, simple formation technologies and variety applications, nanosuspensions will continue to be of interest as oral formulations and non-oral administration develop in the future. It is expected that future research and development work will be carried out in the near future for clinical realization of these targeted delivery vehicle.