NANOTECHNOLOGY BASED ORAL FORMULATIONS OF TOLBUTAMIDE BY USING BIODEGRADABLE POLYMER

NANOTECHNOLOGY BASED ORAL FORMULATIONS OF TOLBUTAMIDE BY USING BIODEGRADABLE POLYMER

ABSTRACT: The present study concerns the development, characterization, and optimization of nanoparticulate oral formulations of Tolbutamide using poly (ԑ-caprolactone) which is a biodegradable polymer. Emulsion Solvent Evaporation technique was used for preparation of drug-loaded polymeric nanoparticles. This research was carried out to improve the therapeutic efficacy of tolbutamide by increasing its bioavailability through size reduction and to achieve the sustained release of drugs by preparing polymeric nanoparticles. The results of FTIR and DSC analysis indicated that there was no significant interaction between drug and excipients. The prepared drug-loaded Poly (ԑ-caprolactone) nanoparticles were characterized for their surface characteristics via morphology, particle size, stability by zeta potential and drug loading efficiency. The prepared nanoparticles were found to in nanosized range with spherical morphology and stable. The free drug particles can be seen on the polymeric surface which attributes to burst effect and immediate onset of action. The sustained release of drugs through polymeric matrix is evident from drug release studies. The prepared polymeric nanoparticles were found to be stable at 5 ± 3 ºC up to three months. This investigation demonstrated the effective application of enhanced bioavailability through the sustained drug release profile of tolbutamide loaded nano-carrier system.

INTRODUCTION: Diabetes mellitus is a chronic metabolic disorder with an increasingly global impact. This metabolic curse results from the defects in insulin secretion and utilization. It is characterized by high circulating glucose 1-2. In this regard, many management strategies have been used for more efficacious maintenance of Type-2 diabetes to provide durable glucose control 3-6.

Nano sizing is one of the approaches used for the management of diabetes 7-12. Nanotechnology refers to the science involved in designing, characterizing and application of materials whose dimension is on the nanometer scale.

Nanotechnology provides personalized medicine systems to protect the body by targeting and killing toxins. Advancement in nano-engineering leads to the development of different categories of nano-particulate systems like nanoparticles, nanosponges, etc. 13-14 These nanoformulations are practical and well-known ways to improve the absorption of drug molecules by reducing the particle size of drugs particularly when there are limited bioavailability and fatal side effects 15.

Various approaches have been used to fabricate nanosized drug particles including the emulsion solvent evaporation method which is the most popular and efficient method 16.

An aryl sulfonylurea compound namely Tolbutamide is commonly used for the treatment of Type-2 diabetes. It belongs to 1st generation of anti-diabetic drugs and has an exceptional hypo-glycemic effect. Tolbutamide causes the release of Insulin by stimulating pancreatic β-cells. The oral dose of Tolbutamide is 500 mg per day with two times administration. It takes about half an hour to reach in the blood and the peak plasma concentration will be attained within 3-4 h of oral administration. The half-life of Tolbutamide is 4.5 to 6.5 h, and it gets metabolized by Liver and metabolites are excreted by Kidney. This drug is a dissolution rate-limited oral hyperglycemic drug and belongs to BCS Class II. This drug is commonly available in the conventional dosage forms, which carry different unwanted adverse effects and limitations. Insufficient accessibility of conventional dosage forms at desired site of action, multiple dosing for chronic treatments, etc. are some of the associated limitations 17. Thus, nano-drug delivery is highly effective method for enhancing tolbutamide therapeutic efficacy and expected to improve bioavailability by improving water solubility and increasing its concentration at site of action 18-21.

Materials: Tolbutamide was obtained from Quantum drugs and chemicals. The Polymer poly (ԑ-caprolactone) was procured from Sigma -Aldrich. Analytical grade solvents and chemicals were used and have been procured from Molychem, Mumbai. For the preparation and characterization of nanoparticles, deionized water was used.

Preparation of Drug Loaded Nanoparticles: Emulsion solvent evaporation technique was used for preparation of tolbutamide nanoparticles. Drug (Tolbutamide) and polymer (Poly (ԑ-caprolactone)) were dissolved in common solvent (Ethyl Acetate) in varying ratios to prepare the internal phase. The so prepared internal phase was added dropwise in the external phase containing liquid paraffin and Span 80 as emulsifier with stirring. The mixture was then sonicated to break down into droplets of nanosize using probe sonicator and further stirred at varying speed until the solvent of internal phase evaporated. The prepared nanoparticles were then collected by centrifugation at 14000 rpm for 30 min followed by lyophilization for further investigation 18.

Drug - Excipient Compatibility Study: Tolbutamide and polymer were mixed in a 1:1 ratio and placed in glass vials. The glass vials were sealed and placed in stability chamber at 40 °C and 75% RH for one month. The FT-IR spectra of drug, polymer and physical mixture of both drug and polymer were recorded and analyzed for any shift in major peaks of the tolbutamide. The spectra of all the samples were recorded in the range of 4000-400 cm-1.

Particle Size and Zeta Potential Studies: Samples of prepared nanoparticles were suspended in Milli-Q water and screened for particle size and zeta potential at 25 ºC by Zeta sizer (Malvern Instruments, UK). The disposable cuvettes were used for sample analysis. The results were reported as the mean ± standard deviation (SD) for three replicates 22.

Drug Entrapment Efficiency: The drug entrapment efficiency of the prepared nanoparticles was determined spectrophotometrically. Sample of tolbutamide nanoparticles (10 mg) was dissolved in a small amount (10 ml) of ethyl acetate and kept for 12 h. Aliquots of 1 ml of the supernatant liquid was taken and further diluted to 10 ml with phosphate buffer of pH 7.4 and was analyzed at λmax of 258 nm using UV-Visible spectrophotometer. The drug entrapment efficiency (%) was calculated using equation 1.

Surface Morphological Study: The shape and surface characteristics of prepared nanoparticles were analyzed by field emission scanning electron microscopy operating at 5kV. The samples were mounted on an aluminum stub with adhesive tape and excess samples were removed and coated with gold for 20 sec. Then the metal stub was placed in E-1010 Ion sputter for 20 minutes under vacuum. After 20 min samples were analyzed under field emission scanning electron microscope 23.

In-vitro Drug Release Studies: Dialysis membrane bag technique was used for the in-vitro drug release studies. The prepared nanoparticles samples were accurately weighed and were packed in a dialysis bags (Mol wt. cut off = 12,000 D) and placed in a vessel containing phosphate buffer pH 7.4 with constant stirring at 37 ± 1 °C. At predetermined intervals, the aliquot of 1 ml was taken and sink conditions were maintained by replenishing with an equal amount of fresh phosphate buffer.

The drug is released from nanoparticles to the outer compartment and sampled for analysis. The samples were analyzed at 226 nm using UV-Vis spectrophotometer 24.

Stability Study: The stability studies of nanoparticles were performed on two temperatures (5 ± 3 °C and 25 ºC). The samples were withdrawn after completion of 1st and 3rd months. These samples were examined for any possible change in particle size, zeta potential, and residual drug content of nanoparticles.

The FTIR spectra of the drug, polymer and their mixture are shown in Fig. 1, 2 and 3 respectively. There is no change in the major peaks of either drug or polymer from which it is evident that the drug and polymer did not significantly interact with each other.

No drug peak was observed in drug-loaded microspheres suggesting that drug was molecularly dispersed throughout the polymer matrix. The result of DSC study of PCL is summarized in Fig. 4.

Characterization of Tolbutamide loaded Poly-ԑ-Caprolactone Nanoparticles: The Tolbutamide loaded poly-ԑ-caprolactone nanoparticles were formulated by emulsion solvent evaporation technique with varying drug-polymer ratio. The prepared nanoparticles were analyzed for particle size, zeta potential and drug encapsulation/ entrapment efficiency. The results are indicated in Table 2. The reports of Particle size analysis and zeta potential of the best batch (TN4) are shown in Fig. 5 and Fig. 6 respectively. 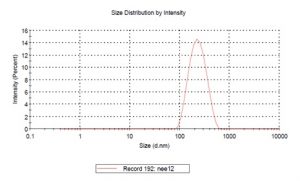 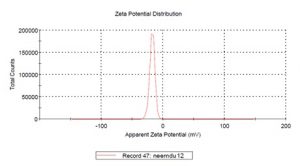 The high value of zeta potential (either negative or positive) and low value of PDI bestow the stability during storage 25-26. The increased drug entrapment efficiency leads to a decrease in the loss of drug increase in the production yield 26.

This increased drug entrapment efficiency also leads to the achievement of the therapeutic effect of the drug even in small doses. 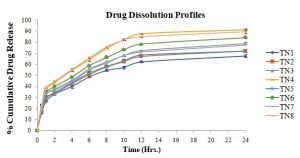 Surface Morphological Studies: The prepared nanoparticles were examined for surface morphology by FE-SEM as shown in Fig. 8. 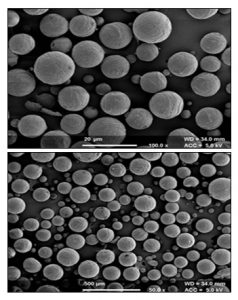 The analysis by Scanning Electron Microscopy concluded that the prepared nanoparticles were almost spherical nanosized particles. Some pores were visible on the surface which may be attributed to the impressions of the solvent diffusion from the surface. The small numbers of free drug particles were seen on the surface of the prepared nanoparticles which suggests that the polymeric matrix was being formed and coated the drug which eventually leads to the controlled release of drug along with initial burst release due to some free drug present on the surface.

Stability Studies: The prepared nanoparticles (TN4) were exposed to stability studies for a period of three months at 5 ± 3 °C and 25 ºC and the relevant results are summarized in Table 3.

CONCLUSION: Tolbutamide loaded nano-particles were prepared successfully by emulsion solvent evaporation technique using poly-ԑ-caprolactone as biodegradable polymer. The drug and polymer were compatible with each other. The selection of the appropriate experimental conditions and drug [polymer ratio resulted in the production of Tolbutamide loaded nanoparticles and TN4 batch was found to be the optimized formulation in terms of Particle size (nm), stability by zeta potential (mV) and drug entrapment/ encapsulation efficiency. The morphological studies indicated that prepared nanoparticles were spherical in shape. Further, the in-vitro study supported the evidence of controlled drug release up to 24 h with initial burst release.

ACKNOWLEDGEMENT: The authors are grateful to Quantum drug and chemicals Ltd. for providing the gift sample of Tolbutamide.

CONFLICTS OF INTEREST: All the authors hereby declare that there is no conflict of interest.