ABSTRACT: The natural acid like lemon juice provides mild acidic state which used to catalyzed reaction of primary amine and aldehyde in green solvent like ethanol at room temperature reflux for 1.5 hour gives Schiff bases in good yield. Schiff bases have attracted considerable attention of us due to their significant biological activities 1 like anticancer, antitumor, anti inflammatory agents 4, insecticidal, antibacterial 5, antituberculosis, antimicrobial 2-3, antifungal 5, anti-HIV and metal corrosion inhibition activities of Schiff bases, besides wide range of pharmacological activities. Natural acid is non-polluting and does not employ any lethal materials, quantifying if as a green approach for the synthesis of Schiff bases. Schiff bases also have several types of biological actions such as analgesic and antimalerial 6. They are working as Ligands for complexes of metal ions. Organosilicon complexes with Schiff bases are found to be beneficial in various agricultural applications like fungicides, bactericides, herbicides, acaricides and antifeedants 7. The metal complex of Schiff bases are also of principal significance in analytical chemistry and chemotherapy 8.

INTRODUCTION: The mechanism of transformation of aldehyde and amines into Schiff bases are possible by two synthetic approaches are possible. In first method nucleophilic attack of primary amine on carbonyl carbon that gives hydroxyl compound which on dehydration gives Schiff bases. While in the second method the formation of Schiff bases in the second step largely depends upon the rate of removal of water from reaction mixture. Originally, the classical synthetic route for synthesis to Schiff bases was reported by Schiff 9 that, which involves condensation of primary amines with carbonyl compounds under azeotropic distillation with the simultaneous removal of water 10.

Various eco-friendly methods have been given for the production of Schiff bases, Hossein et al (2006), have reported the synthesis of Schiff base catalysed by P2O5 / Al2O3 in solvent less condition that gives quantitative yields of the product. Bendale et al (2011) 11 has reported UV chamber, sonicator and also by grinding method are useful for synthesis of Schiff base. As reported by Patil et al (2012) have reported a mild and selective imine formation of aryl aldehyde and aromatic primary amine using lemon juice (Citrus limonium species) at room temperature in 25-300 minute showed good to admirable yields. The study revealed that electron withdrawing groups that are attached to aromatic aldehyde and electron donating groups attached to aromatic amine enhances the reaction. However no result was obtained when condensation was carried without employing lemon juice. The role of lemon juice was to catalyze the reaction was demonstrated by the lack of Schiff base formation when the reaction hat was carried out in the absence of catalyst.1, 12, 14

The Knoevenagel condensation 12 of aldehydes with active methylene compounds is an important method used for the synthesis of pharmaceutically important organic compounds. Deshmukh et al (2012) 13 showed that lemon juice can act as an efficient homogeneous acid catalyst for the knoevenagel condensation reaction under solvent-free environment. Thus, when various aldehydes and malononitrile were mixed with lemon juice followed by stirring of mixture at room temperature for 5-120 min minute lead to formation of condensation product in good yields.

The new approach for knoevenagel condensation by lemon juice was non-polluting and does not employ any lethal material, quantifying it as a green method. Also Patil et al (2011) 14 reported that aldehyde, 1,3-dicarbonyl compound and urea treated under solvent free condition using extract of lemon juice as natural catalyst form three constituent leaded Biginelli type syntheses of dihydropyrimidinone. This procedure gives better yield, non-polluting and green aproch for biocyclocondensation reaction. A similar type of work done by Pal et al (2014) 15 confers the yields of bis-, &tris (indolyl) methanes using lemon juice as a catalyst. Some major species of citrus family are Citrus aurantium, Citrus indica, Citrus limonium which are commonly known as lemon. In India it is also cultivated in home gardens. For the present work, we used extract of citrus limonium species of lemon. It has played role as a natural catalyst for synthesis of Schiff bases.

MATERIALS AND METHODS: A mixture of Acetophenone (A) and semicarbazide hydrochloride (B) was taken in iodine flask Using water as a solvent followed by the catalyst sodium acetate to the reaction, with shaking it for 10 min. After that the reaction mixture was poured on crushed ice followed by separation and filtration of solid compound obtained. It was dried and recrystallize using aqueous ethanol. The precursor1-(1-phenylethylidene) semicarbazide (C) Was used for further reactionfor various substituted aldehydes. (Fig.1) The M. P. of the recrystallised product was determined. (1780C) 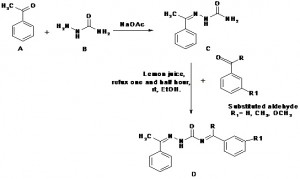 Formation of Schiff’s bases by using natural acid and ethanol as solvent was monitored by thin layer chromatography (TLC). The spectra of known compound have been identified by comparison of spectral data (Infra Red). The Melting points (MP ºC) were determines by open capillary tube and are uncorrected. The percentage yield is calculated by the formula.

The Percent atom Economy is calculated by the formula,

TABLE 1: CHARACTERIZATION OF VARIOUS PRODUCTS AND THEIR PROPERTIES 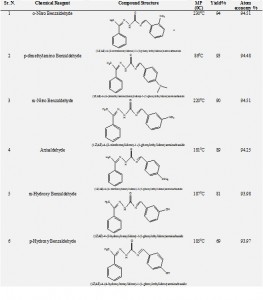 CONCLUSION: The study revealed a new and ecofriendly route for the formation of Schiffs bases using lemon juice as a catalyst and other appropriate Lemon juice acts as a Natural acid that is non-polluting and does not employ any lethal materials, quantifying if as a green approach for the synthesis of Schiff bases. From this study, it is clearly conferred that the natural acid is having enough acidic medium for preparation of Schiff bases in a good quantity. The method used in the present study is cleaner, safer and more eco-friendly, Involving mild reaction conditions and required very simple experimental setup leading to the formation of satisfactory products.

ACKNOWLEDGEMENT: We are thankful principal of Phulsing Naik Mahavidyalay, Pusad providing laboratory and instrument facility to us, also Mr. G. S. Borgade who help us lot during This project work.

CONFLICT OF INTEREST: There is no conflict of interest regarding the publication of the Manuscript.