ABSTRACT: Henna (Lawsonia inermis) is widely used cosmetically and medicinally. Literature survey reveals that the plant henna also has anticancer activity. Most of the anticancer activities of Lawsonia inermis plant are carried out using total leaves extract, and purified individual compounds also. The cytotoxicity profile of the extracts, as well as purified fractions, was determined by MTT assay on HeLa cell line. As the total ethanolic extract demonstrated growth inhibition in cancer cells, attempts were made to isolate the active compound from total ethanolic extract, with potent activity. Lawsone, 2-hydroxy-1, 4-naphthoquinone is the active constituent of Lawsonia inermis (Henna), L. alba, and other species of Lythraceae family. It is reported to posses various medicinal properties. The present study reports the anticancer activity of lawsone, naphthoquinone derivative isolated from the henna leaves, and its predictive conformation by spectral studies. Isolated lawsone was tested for the anticancer activity, which showed significant results.

INTRODUCTION: The associated intolerable side effects of the radiation and some chemotherapeutic agents take away the “Quality of Life,” of a cancer patient, though they provide effective control over cancer. Some of them are effective and agents of choices by the oncologist. However, the pain and agony through which the cancer patient goes due to side effects are unexplainable. Hence, the other side of cancer is compiling to take a look and give thought process to alternate medicine. Given ancient claims about the utility of plant material on understanding the molecular mechanism of cell multiplication and testing chemical entities for the targeted interruption in the cell proliferation in cancer, modern research indeed revealed some effective phytochemicals for the cancer therapy 1, 2.

A single plant cell is a huge chemical reactor, that way a plant is a huge chemical factory. And if the chemical structures of latest anticancer drugs are studied their identical or prototypes are already available in plants. Hence, it is not unreasonable to believe that a potent anticancer drug can be isolated from the plant. Interest has reviewed recently, in henna to investigate isolation, purification, and identification of novel anticancer active phytochemicals that might lead to drug development for intolerable and incurable cancer disease. These plant-derived drugs are considered natural, safe, beneficial and affordable 2. Henna is considered a safe herbal medicine with only a few and insignificant side effects 16, 17.

Flowers are used as a fragrant agent in local scent. Seeds are deodorant and yield oil, while flowers are refrigerant and soporific and yield a fragrant oil 5. All parts of this plant are reported to have some medicinal use. Leaves contain a dyeing pigment lawsone (2-hydroxy-1,4-naphthoquinone), which is widely used in cosmetic and textile industry 6. Henna is a well-known plant for centuries. Throughout the world, it is used medicinally and cosmetically. Since, ancient culture, this plant is used in wedding, especially to grace / embellish bride, in Eids and social celebrations. Henna is applied to dye palms, hands, forearms, fingernails, hairs, legs, soles or feet, and other body parts. All over the world henna body art is very much popularised, in the form of tattoos, designed on arms, legs, behind the neck. This stain last for 3-4 weeks 7. 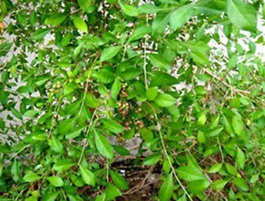 Various in-vitro and in-vivo biological studies of L. inermis have reported the plant to have analgesic, hypoglycemic, anti-malarial, hepatoprotective, nootropic, immuno-stimulant, anti-inflammatory, antibacterial, antimicrobial, antifungal, antiviral, anti-parasitic, antitrypanosomal, antidermatophytic, anti-oxidant, anthelmintic, antifertility, tuberculostatic and anticancer properties 12, 13, 14, 15. The Scientific Committees on Consumer Products and Consumer Safety has presented a summary of detailed toxicity studies done on henna 16, 17. In some cases, the henna extract was found to induce allergic reactions such as itching, depigmented skin patches, blistering and permanent scarring also, which are treated with antibiotics and corticosteroids 18-22. The use of para-phenylenediamine (PPD) in henna for getting a long-lasting stain, is the main cause of allergic contact dermatitis or serious allergic reactions 23-29.

Plant Material: The leaves of Lawsonia inermis were collected from the local area of Nagpur region. The leaves were washed with water to remove the dust and were shade-dried. The leaves of Lawsonia inermis were authenticated from the Botany Department of Rashtrasant Tukdoji Maharaj, Nagpur University, Nagpur allotted with the specimen number 10014. The cancer cell lines were procured from National Centre for Cell Science, Pune and pure lawsone was procured from Himedia, India.

Preparation of Extract (Extraction of Plant Material): Two extracts were prepared, one alcoholic and the other hydroalcoholic (1:1). The extraction was carried out by the cold maceration process. Ethanol was added to the shade dried leaves of Lawsonia inermis, mixed properly and was kept for maceration for 15 days with occasional shaking. After completion of extraction with ethanol, the leaves were air dried, and the same leaves were extracted with the mixture of ethanol and water (1:1), by cold maceration for 15 days. In both the cases solvent was removed by evaporation, the residue obtained was dried, weighed and percentage yield was determined. This was followed by defatting of the total ethanolic extract by n-hexane. All these three extracts, i.e. alcoholic, hydroalcoholic and the defeated fraction where tested for anticancer activity.

Anticancer Activity (MTT ASSAY): The cytotoxicity of the alcoholic extract on in-vitro cultured HeLa cell (the human cervical cancer cells) was determined. Freshly passaged HeLa cells were centrifuged and washed with MEM. The cell count was adjusted to 2.5 × 105 cells/ml by suspending the cells in fresh RPMI with 5% FBS (Invitrogen). This cell suspension was then transferred to a 96- well TC plate for the assay. A gradient of extract concentrations was supplemented in the medium for the assay and had the final concentration 500, 1000, 1500 and 2000 μg/mL.

The plate was incubated at 37◦C in a humidified environment with 5% CO2 in air for 48 h. After incubation, the cells were washed and re-suspended in fresh medium containing MTT (Himedia) and were further incubated for 3 h. The MTT formazan formed in the viable cells was extracted in DMSO (BIOGENE Reagents Inc., CA, USA) and read at 570 nm in the Bio-Rad ELISA plate reader. All the three extracts were subjected to MTT assay.

DNA Fragmentation Analysis: DNA fragmentation is the biochemical hallmark of apoptosis. Jurkat, Molt-4 cells and human lymphocytes were exposed to nisin at the cytotoxic concentration, and the cells were incubated at 37 ºC for 6 h as well as for 48 h. The degree of DNA fragmentation was determined by performing electrophoresis, as per the protocol detailed by Barry et al., 30 the treated and untreated cells were directly subjected to agarose gel electrophoresis. The cells were loaded into the wells cast in the cell lysis gel- 0.9% agarose in TBE buffer pH 8.0 with 2% SDS and 64 µg/mL proteinase K (SIGMA). The cell lysis gel was followed by the 2% agarose separating gel. The electrophoresis was carried out in TBE buffer pH 8.0 overnight at 35V.

Single Cell Gel Electrophoresis (SCGE) / Comet Assay: To further assess apoptosis and DNA fragmentation, a more specific and sensitive comet assay was performed 31, 32, 33. The Jurkat, Molt-4 cells and human lymphocytes were treated with 600 µM concentration of nisin in RPMI without serum for 3 h at 37 ºC. Cells exposed to 60 µM H2O2 34 were treated as a positive control and untreated cells as negative control. After incubation, the cells were embedded in 1% low melting agarose in PBS and were lysed in lysis buffer at 4 ºC for 2 h. The lysed cells were then incubated in 0.3N NaOH, 1mM EDTA solution for 30 min at room temperature and further electrophoresed at 25V for 20 min in the same buffer. After electrophoresis, the agarose-embedded cells were stained with propidium iodide (20 µg/mL) in PBS washed with chilled distilled water and observed under Motic Fluorescent microscope.

Isolation of the Lawsone: The lawsone isolation was carried out as per the procedure is given in the book Practical Pharmacognosy by Dr. C. K. Kokate.

About 50 g of crushed fresh henna leaves were agitated for 2 h with 20% sodium bicarbonate solution. The extract was filtered, and the marc was re-extracted for 1h with the same solution, filtered and the alkaline extracts were combined. The extract was acidified with dilute sulphuric acid and was re-extracted with sufficient quantity of ammonium hydroxide, followed by dilute hydrochloric acid to acidify it.

The product was finally extracted with benzene and yielded yellowish-brown colored crystals of lawsone. The yield of lawsone was found to be 1.5% w/w. This isolated pure lawsone was tested for anticancer activity using above said MTT Assay on the HeLa cell line, which showed prominent activity.

TABLE 1: THE ABOVE TABLE ILLUSTRATES THE WAVE NUMBER AND FUNCTIONAL GROUP OBTAINED IN IR ANALYSIS 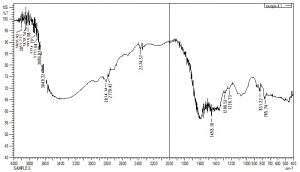 FIG. 4: MTT ASSAY RESULTS OF THE HENNA EXTRACT AND LAWSONE ON HELA CELLS 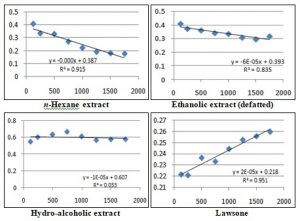 To further confirm the results of electrophoresis Fig. 8, comet assay was performed using same cytotoxic concentration of isolated lawsone derivative versus pure lawsone to treat the cells and as was used for agarose gel electrophoresis. But even much higher concentration purified lawsone derivative exposure failed to induce actual comets with substantial tail length, as were induced by 60 µM H2O2 Fig. 7C. All the comets were graded as per Choucroun et al., 35 and a count of C>1 was determined to derive a percentage of cells with DNA damage from a total of 50 randomly scored cells. There was no significant difference in the percentage of C>1 cell in the batch of lawsone treated and untreated cells. From the above data, it can be confirmed that the plant has anticancer activity. The above graph shows that both henna alcoholic extract and isolated lawsone displayed the cytotoxic effects against HeLa cell line. 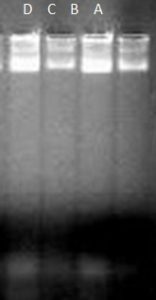 CONCLUSION: In view to discovering an effective, potent and economic anticancer drug from the herbal origin with no or fewer side effects, the literature search for local plants having alleged anticancer activity ended on one of the potential plants namely Lawsonia inner. MTT assay performed on various extracts using HeLa and IMR-32 cell lines showed prominent anticancer activity with alcoholic extract. Lawsone, a naphthoquinone derivative with prominent color and maximum yield has proved to have anticancer activity, which is further proved by DNA fragmentation. The spectral studies and Co-TLC of the isolated compound showed similar results as that of the lawsone.