ABSTRACT: Colour is a molecule that absorbs certain wavelengths of visible light and transmits or reflects others whereas colourant is the activity of that molecule. Natural food colour is any dye, pigment or any other substance obtained from vegetable, animal, mineral, or source capable of colouring food drug, cosmetic or any part of human body, colours come from variety of sources such as seeds, fruits, vegetables, algae, and insect. Natural colour exists in their normal habitat at extremely low concentrations and as a result their extraction is expensive and highly sensitive to change. Colour as a way to identify a food and a way to judge the quality of a food. Food colours come in many forms consisting of liquids, powders, gels and pastes. Food colouring is used both in commercial food production and in domestic cooking. Due to its safety and general availability, food colouring is also used in a variety of non-food applications including cosmetics, pharmaceuticals, home craft projects and medical devices

INTRODUCTION: Natural colours are extract from fruits, vegetables, seeds, roots and also from microorganisms which are sometimes called biocolours. Plant pigment, by virtue of their natural occurrence in edible plant are generally considered to be harmless. Nature produces a variety of brilliant coloured pigments viz., water soluble anthocynanins, betanins and fat soluble pigments carotenoids and chlorophylls used for colouring foods 1, 2.

Anthocyanins, a group of water soluble pigments are responsible for the attractive red to blue colours in many fruits and vegetables including cherries, grapes, black berries and have high colour intensity at pH values less than 4.0 (Griffiths, 2005) 3. Anthocyanins absorb UV and visible light in a range 250-650 nm. They are used worldwide as a source of edible colours in beverages and desserts which have an acidic pH.

To Maintain or Improve Safety and Freshness:

To Improve or Maintain Nutritional Value:

To Improve Taste, Texture, and Appearance.

The anthocyanin and betalain groups are mutually exclusive in the plant kingdom. Betalain, found in red beet, is a water soluble pigment similar to anthocyanin. Betalains are a group of red and yellow pigments, betacyanin and betaxanthin respectively.

Carotenoid group of pigments are responsible for the yellow, orange and red colours of many plants and are used extensively as natural and nature identical colours in foods. The major representative of carotenoids is β-carotene. Carotenoids are hydrocarbons with 40 carbon atoms formed by linkage of C5 isoprenoid units in a series of conjugated diene bonds and their oxygenated analogues are called xanthophylls. Carotenes tend to be soluble in non polar solvents such as hexane, while xanthophylls are more freely soluble in polar solvents such as methanol and ethanol. A significant advance has been made by the food industry to use carotenoids as food colour as a replacement for artificial colours, which also has an extra advantage of their associated health benefits. As a result, a large number of published articles are available on the extraction and analysis of carotenoids and on identification of new carotenoids from new sources. Information on nutritional profile of foods including cis and trans-isomers of carotenoids, health consequences of carotenoid consumption and use of carotenoids as food colourants are reported.

Caramel, another natural colour, is obtained by heating carbohydrates, alone or in the presence of food-grade acids, alkalis and/or salts, produced from commercially available, food-grade nutritive sweeteners consisting of fructose, dextrose (glucose), invert sugar, sucrose, malt syrup, molasses and/or starch hydrolysates and fractions thereof. The acids used are food grade sulfuric, sulfurous, phosphoric, acetic and citric acids; the alkalis are ammonium, sodium, potassium and calcium hydroxides; and the salts are ammonium, sodium and potassium carbonate, bicarbonate, phosphate (including mono- and dibasic), sulfate and bisulfite. Caramel, a dark brown to black liquid, is a complex mixture of compounds. Caramel is soluble in water and is used to impart a range of brown colours to foods. Caramel colour preparations can also be converted to powder form and are suitable for application in a wide range of foods and beverages.

Animals can also be a source of food colourings. Cochineal, or carminic acid, is a red, purple colour that is obtained from the bodies of certain scale insects. These feed off cactus leaves and their bodies are commercially harvested in Africa, Spain and Central America. Their bodies are dried and crushed to red colouring.

Flavonoids, found in many flowers, fruits and vegetables indigoid, found in beetroot.

Carotenoids, found in carrots, tomatoes, oranges and most plants.

Carrots contain an orange molecule called beta-carotene which is part of this group.

Most natural and nature identical colours can dissolve in oil but do not dissolve in water. They are usually processed to form their sodium or potassium salt. This makes them soluble in water and suitable for use in foods. They may also be dissolved in oil and incorporated into water soluble beadlets.

“marigold extract" for the solvent extract of the flowers.

FIG.1: REPRESENTATION OF PLANT PARTS USED IN PREPARATION OF NATURAL COLOURS (IN %) 1

They are contributing to the obesity epidemic by attracting children (and adults) to highly processed food, which in many cases is being eaten instead of fresh whole foods 10.

Information concerning the negative effects of synthetic food colourants on human health, particularly children’s health, continues to be a major concern with respect to food chemistry. Though past research showed no correlation between attention-deficit hyperactivity disorder (ADHD) and food dyes, new studies now point to synthetic preservatives and artificial colouring agents as aggravating ADD and ADHD symptoms, both in those affected by these disorders and in the general population.

Furthermore, allergic reactions to food additives are usually mild- skin irritation, intestinal upset, some breathing problems, so they may be greatly under-reported. A 2009 study published in “Current Opinion in Allergy and Clinical Immunology” reported that allergic reactions to food additives seem to be much more common up-to 7 per cent in chemically sensitive people prone to eczema, a type of skin rash. Chemicals associated with triggering allergies or asthma includes monosodium glutamate, or MSG, sulfites, food colourings and artificial sweeteners.

Research has also associated food dyes with problems in children including allergies, hyperactivity, learning impairment, irritability and aggressiveness. A U.S. study published in Science found that when children who scored high on a scale measuring hyperactivity consumed a food dye blend they performed worse on tests that measured their ability to recall images than when they drank a placebo. In July 2010, the European Parliament’s mandate that foods and beverages containing food dyes must be labeled as such went into effect for the entire European Union 13. 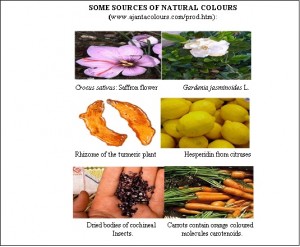 The law in Europe allows 43 colours with E-numbers to be used in foods. It also lists the foods which may be coloured and maximum levels of colour added to those foods. The variety of colours allows many different shades to be obtained 14.

Nature identical colours vary in usage levels but can be very efficient. For example, beta-carotene is used at levels of 1 to 30 mg per kilogram of food.

Besides colouring food, several natural dyes possess bioactive properties and have been used as therapeutic agents and as diagnostic tools. Some of the dyes have been reported for following curative effects; analgesics, antibacterial, antifungal, antileprotic, antiviral and anti-inflammatory 15.

Turmeric contains phytochemical compounds (curcuminoids), which give bright yellow-orange colour. These curcuminoids have been the focus of numerous clinical studies investigating their long term safety, antimicrobial and anti-inflammatory activities. Turmeric’s most active curcuminoid is curcumin 16. Preliminary studies have examined the possible role of turmeric (specifically curcumin) in reducing the risk or severity of several types of cancer 17. Recent research has examined curcumin’s ability to block the effects of homocysteine on the vascular system. This could potentially benefit those with HIV as well as protect the cardiovascular system 18.

Flavouring additives are the ingredients, both naturally occurring and added, which give the characteristic flavor to almost all the foods in our diet. “Flavour enhancers are not flavours themselves but they amplify the flavours of other substance through a synergistic effect.” A flavour enhancer is a substance that added in a food to suppliment and enhance its taste or aroma 4, 8.

Flavourings are used in food products at very low concentrations. They are normally made from a mixture of substances which provide a flavouring of suitable strength that can be stored and then used in the food production process 20. 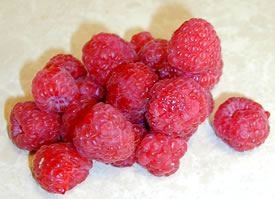 FIG.3: THE FLAVOUR IN RASPBERRIES IS BECAUSE OF
AN AMAZING NUMBER OF FLAVOUR MOLECULES.

Natural flavours: include Spices, roots, essences, and essential oils, herbs, fruit juices and certain plant extracts like menthol from mint and citral from lemon grass. The most natural form of flavor additives available in the food industry are Whole fruit, crushed fruit, purees and concentrates. Another group of natural flavourings obtained by extraction from certain plant products vanilla beans, Licorice root, lemon peel, coffee, cherry etc., which are generally extracted in the form of alcoholic infusion.

They are volatile. They are concentrated hydrophobic liquids containing volatile aromatic compounds extracted from plants. Hydro distillations are used to extract the materials 21.

They are non-volatile. They are concentrated aromatic oily mixture extracted from plants through solvent extractors. They are obtained from wax like masses called concretes (high mol wt) from plant tissue. Absolutes are low molecular weight compounds.

Fruit Flavours with other natural flavours:

They are composed of fruit juices and their concentrates.

Many natural foods are acidic. For example, oranges, lemons, apples, tomatoes, cheese and yoghurt contain natural acids, such as citric acid, that give them their characteristically sharp taste 22. 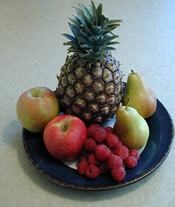 FIG.4: MANY FRUITS CONTAIN NATURAL ACIDS THAT GIVE THEM A SHARP TASTE.

CONCLUSION: Food colours flavours and flavor enhancers are used for a number of purposes, mainly to extend the life of processed foods so they can be transported, stored or kept on the shop shelf for longer, maintain a standard quality, and make the products more attractive to the consumer. Additive groups include antioxidants, colourings, flavourings and preservatives. They have played an important role in reducing serious nutritional deficiencies among consumers. These ingredients also help ensure the availability of flavorful, nutritious, safe, convenient, colourful and affordable foods.

ACKNOWLEDGEMENT: We are grateful to the Dr. N. A. Khan, assistant professor department of biotechnology for support to prepare, modification and suggestions of this review article.